Once in a while, everybody needs a randomly generated dungeon. I take that as a fact. My dilemma is always the choice – with such an over-saturated niche, how do I choose the most bad-ass one? Thankfully, this month my dungeon crawling RPG needs are covered by Dustin Auxier’s The Enchanted Cave 2. 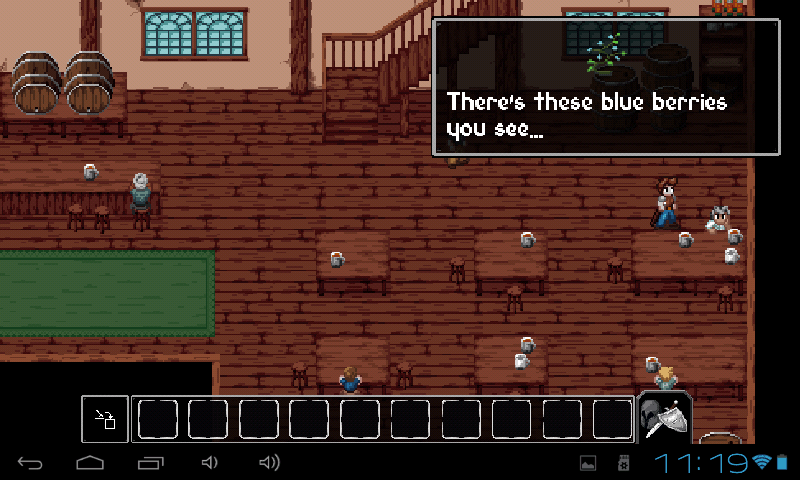 You find yourself in a city where pilgrims come to crawl the dungeons searching for artifacts, priceless loot, magic powers and incredible treasures. Everyone you see around you has a story and you can talk to them. You can wander around the tavern making small talk, or you can visit the museum, where you stack all the artifacts you bring from your cave journeys, but mostly, you’ll be coming back to town to restore your life force only to go back to the caves again. 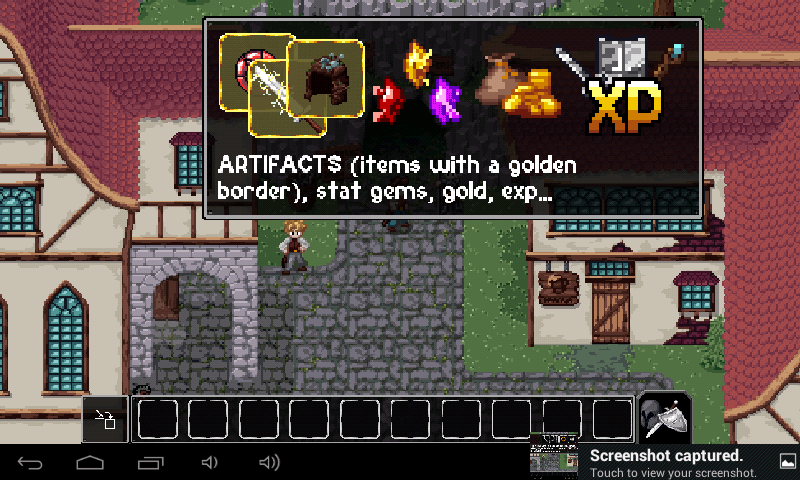 As you first play, you will choose a character from the set of pre-made looks. The Enchanted Cave 2 is a delight of a procedurally generated dungeon. Each time it’s a new layout with new monsters, but you can expect to find the chests of loot and shops in pre-determined places. As a result, despite facing an unfamiliar environment each time, you have your agenda. Here is how it goes.

As you enter the first level, you see a shop, where you can buy stuff or get a piece of advice – don’t ignore that. The shop lets you buy weapons and if there is a hearth near that, you can also craft spells and enchant your weapons. Like it or not, there is no clear instruction on how to craft and enchant things the right way – you’ll have to get creative. If anything, the system won’t let you add two morels to a three-ingredient item – the other two need to be of different class, lie a ring or a knife and something else, like fire. 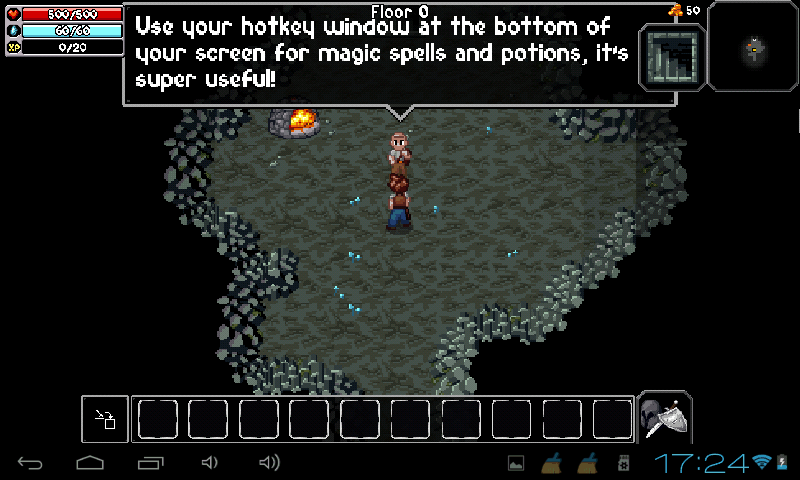 Next up is a stairway leading down, always down – tap that to proceed to the next level. The good part is you don’t have to clear a level to be able to get to the next one. Hence, you can advance pretty fast through the levels, but don’t rush too much because the further you go, the more powerful monsters you will have to face to get anywhere near the treasures and artifacts, or the passage to the next level.

The great part is you can flee the dungeon when you are out of life energy, provided you find the golden wings that can take you to the city at any time. 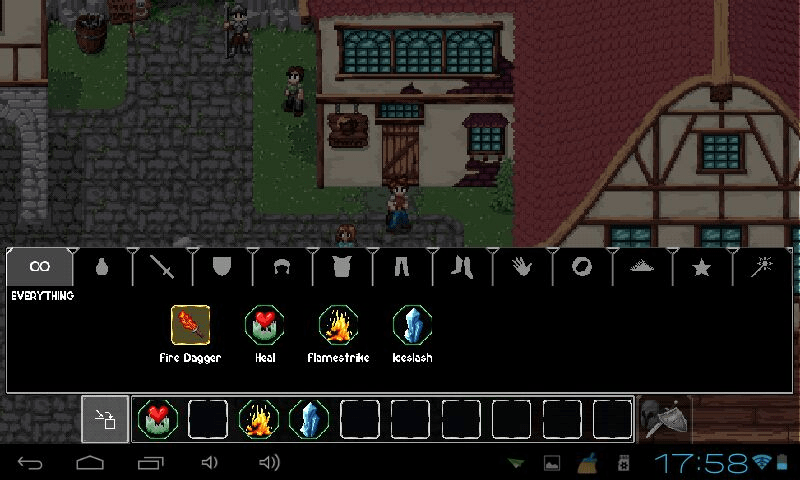 The controls are easy and smooth and the layout is a grid – tap anywhere, and your hero walks there. If there is a monster on the grid you chose, a battle ensues. Before picking up a fight with anyone, you can long-tap on a monster to see their stats and get a better idea if you have a chance against them. It’s not much of a deal at the initial levels, where you fight rats and angry mushrooms, but soon enough you will face lizards and goblins. Slaying those takes more than a butter knife. Lizards are vulnerable to ice, goblins to fire… or vice versa. You’ll get the idea fast.

That’s the point – there is ton of content in the Enchanted Cave 2, and it’s so intuitive and familiar, it could have been boring, but it’s not. There is also a great deal of exploration, and you’ll be grateful for the things being intuitive.

Additionally, you can switch from fast to slow battles when the going gets tough, and you might use more time to see how the battles evolve, so that you have the chance to flee before you get killed.

The battles are automatic once you engage with the enemy. 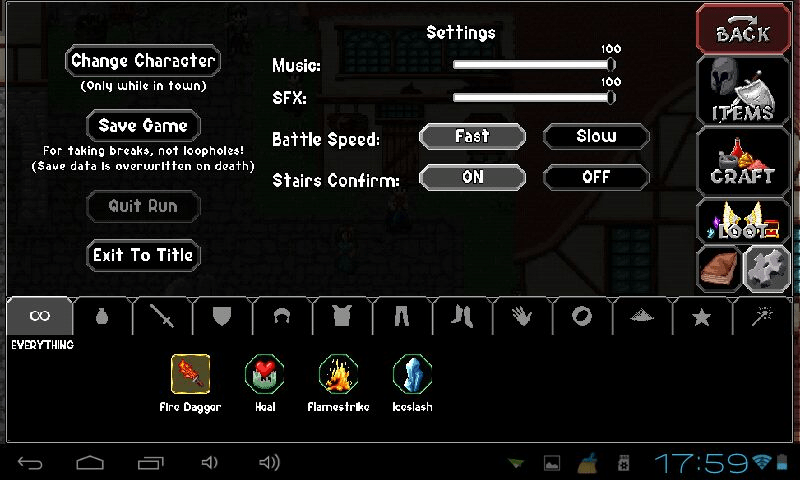 With all the variety of loot you can find in the dungeons, there is one thing you need to find as soon as possible – the golden wings. They look like an angel’s wings – shiny and beautiful. Whenever you get too weak to go on, wrap those around you and get teleported back to the city. You will lose the loot, but not the artifacts, so it’s a fair trade off.

It’s not too difficult to find the wings and they’re in the green golden chest every two or so levels, easily recognizable.

Then, there are clothes, ammo and weapons, chests of gold you can then spend on ammo, weapons, enchanting and crafting. Some enemies you slay will give you a bonus – you will be able to choose to up your points in one of your stats – health, magic mana, xp and such. Others will die casting a tiny tooth – pick that up, you never know in what amazing ways it can serve you. 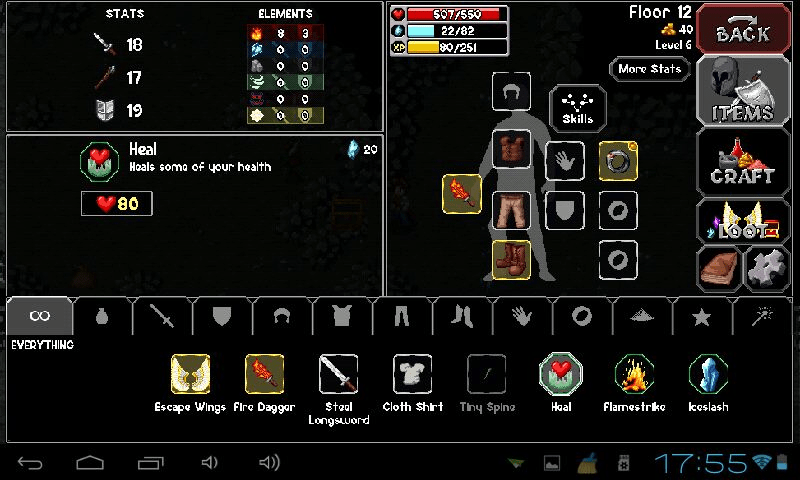 The clothes and ammo you gather are in your sort of backpack, where you can change them. Unfortunately, the things you put on are there only stats-wise and not on the character himself – that is probably the only fault I could find with the game.

There are three main areas in the UI you will be working with – the skill tree, the backpack items and enchanting and the shop/crafting screen. The latter becomes available when you reach the shopping area in the dungeon – these do not come in every level, but frequently enough to take advantage of them at the right moment. 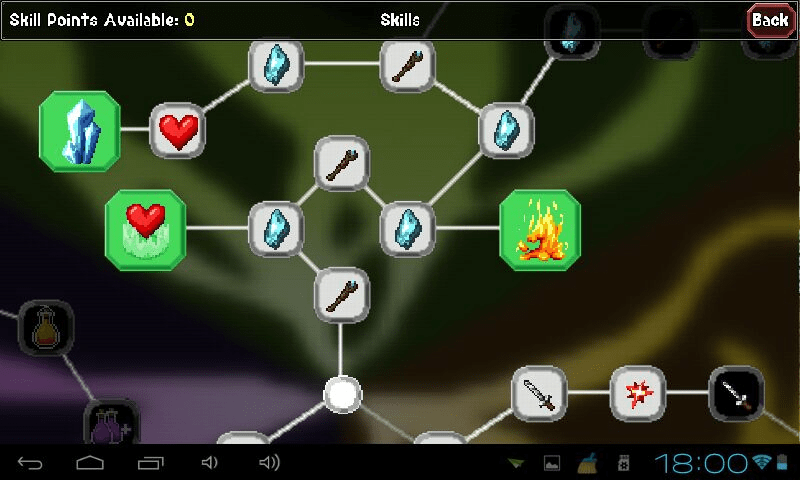 The skill tree becomes active when you start accumulating XP points you can then spend on activating specific skills in defense and offense combat, magic, healing and life energy areas. Of all the backpack compartments, and there are many – one for the shoes, another for the rings, one more for the special magic weapons – enchanting is the least intuitive. Nonetheless, the more things you try, the better idea you get about the successful combinations. Same with crafting. 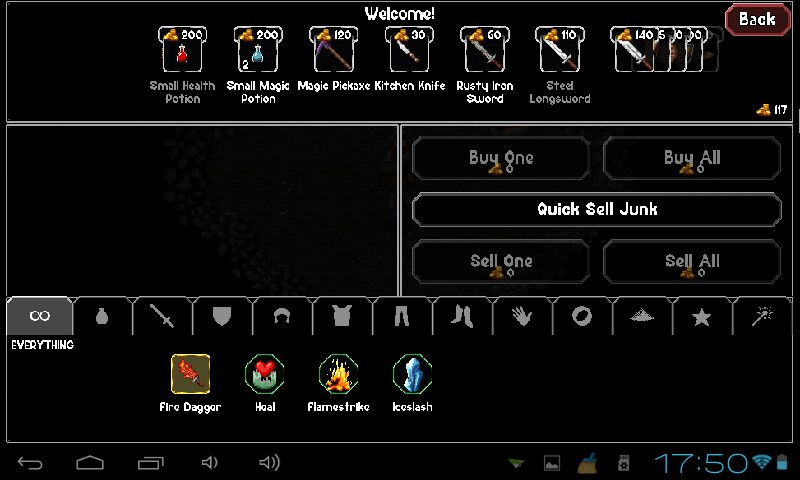 Keep an eye on your stats, too. Life force is not the only thing that will get you through – magic mana is equally important for some beasts are better slain with magic rather than brute force.

As for the titular monsters, there are quite a lot of them – different in stats and looks, they don’t make it easy to collect loot or advance.

Out in the city, you will be able to leave the stuff you think you don’t need in the museum. It’s not a bother at the beginning, but as you advance you might eventually come by too much items, so stacking them off in the museum is a welcome opportunity. 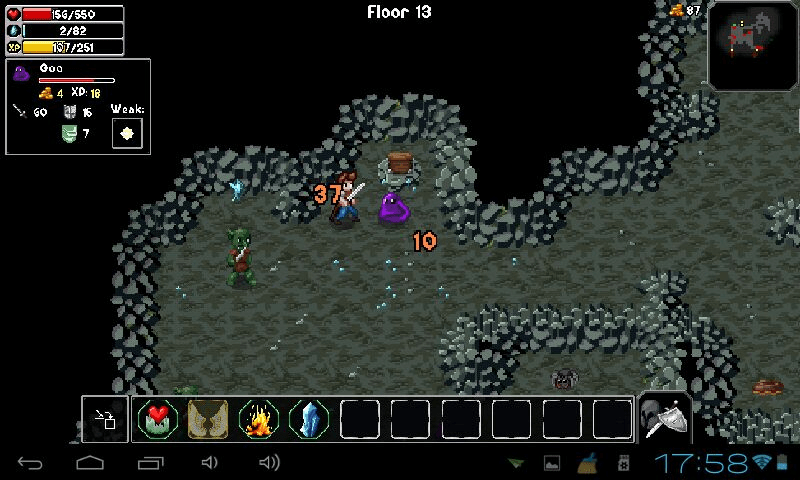 The Enchanted Cave 2 is a tale of the faux-retro style, featuring the pleasant color palette and quite pleasing battle scenes, with blood, fire, ice and sword clashing. The centerpiece of its visual delight is the angel wings, although the other elements are spot on, too. Overall, the game is a pixel eye candy and the music is very good. 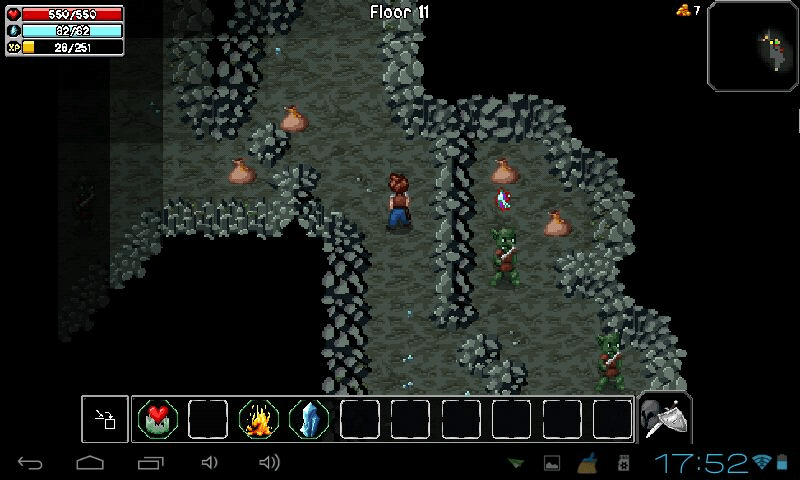 Excellent. Depending on how much free time you have on your hands, you can finish the game in one day, but that’s definitely not my case. I’ve been playing moderately for over a week now, and it’s fun and addicting all over. I can’t recommend it more.

It’s a premium game, no IAPs. 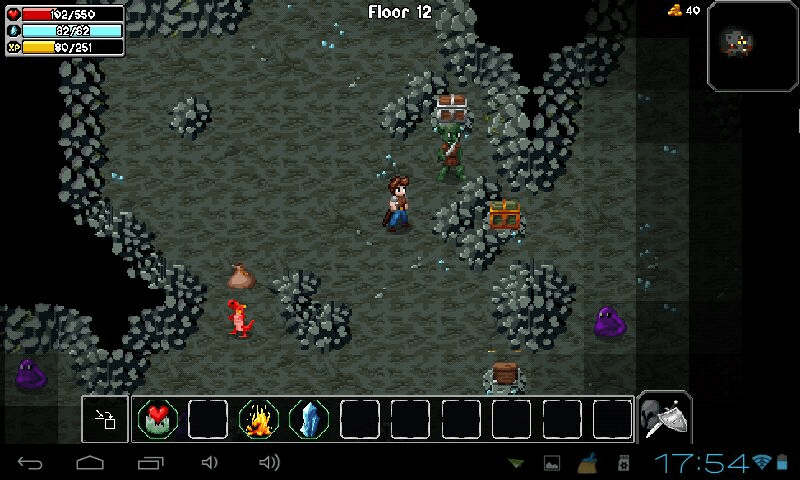 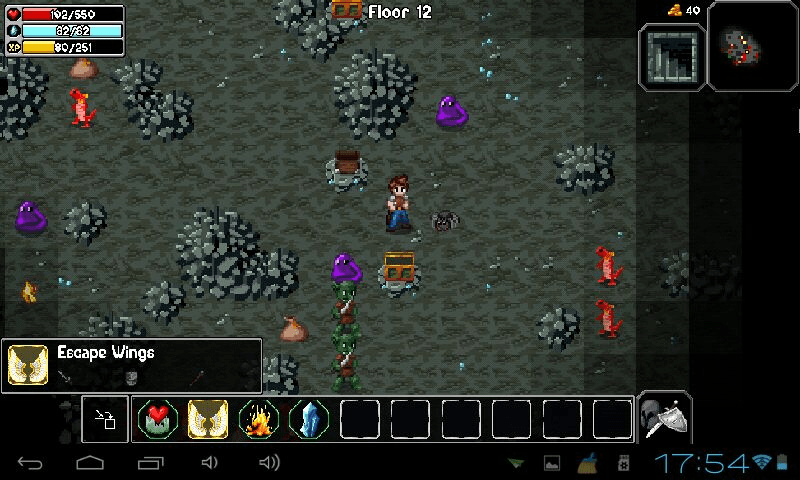 The Enchanted Cave 2 is a smooth, eye-pleasing and rewarding dungeon crawler with a perfectly moderate difficulty curve and a great replay value. Its randomly generated layouts mean you’re always playing a different adventure, while the slew of familiar dungeon crawler and RPG elements mean you will feel at home here. It’s an overall addicting experience – I recommend it wholeheartedly to the fans of the genre and the newcomers. As they say, it’s an instabuy.