It’s pretty rare for me to get so into an iPad game that I’ll actually go from a 100% fully charged battery, all the way down to <10%. However, one of those rarities occurred while I was playing Eternity Warriors 3, so you can expect to read a lot of good things about the game in this review. If you enjoy prefer elements in your RPG games like Dungeon Crawling, Loot Managing, Item Fusion, Difficult Bosses, and Intense Battles — you are really going to like Eternity Warriors 3, just like I did. As with many great games, it does have its flaws, most note-ably the glitch where enemies briefly become invincible for no apparent reason, but nothing that really ruins the game.

One thing that was very disappointing, is that I could never get the game to work on my Galaxy S4, it would just crash every time I tried to open it. The game ran pretty flawlessly on my iPad 3 though, so it wasn’t the end of the world. Maybe it’s an issue with my phone, so I won’t hold anything against EW3 for that; playing on my phone would be nice though.

Although there’s nothing groundbreaking in this category, the game certainly isn’t an eye-sore. The sounds of battle are great, and the background music suits very well in pretty much every area of the game — the music can get a little repetitive at times and there isn’t a whole lot of variety, but you are usually more focused on trying to beat the level as quickly as possible. One of the highlights for me, is the wide variety of armor and weapon models, which is why Eternity Warriors 3 can get by which a high score in this category. Honestly, there’s nothing more rewarding in most dungeon crawlers than getting a piece of gear that just looks awesome, and that is most definitely provided in this game. 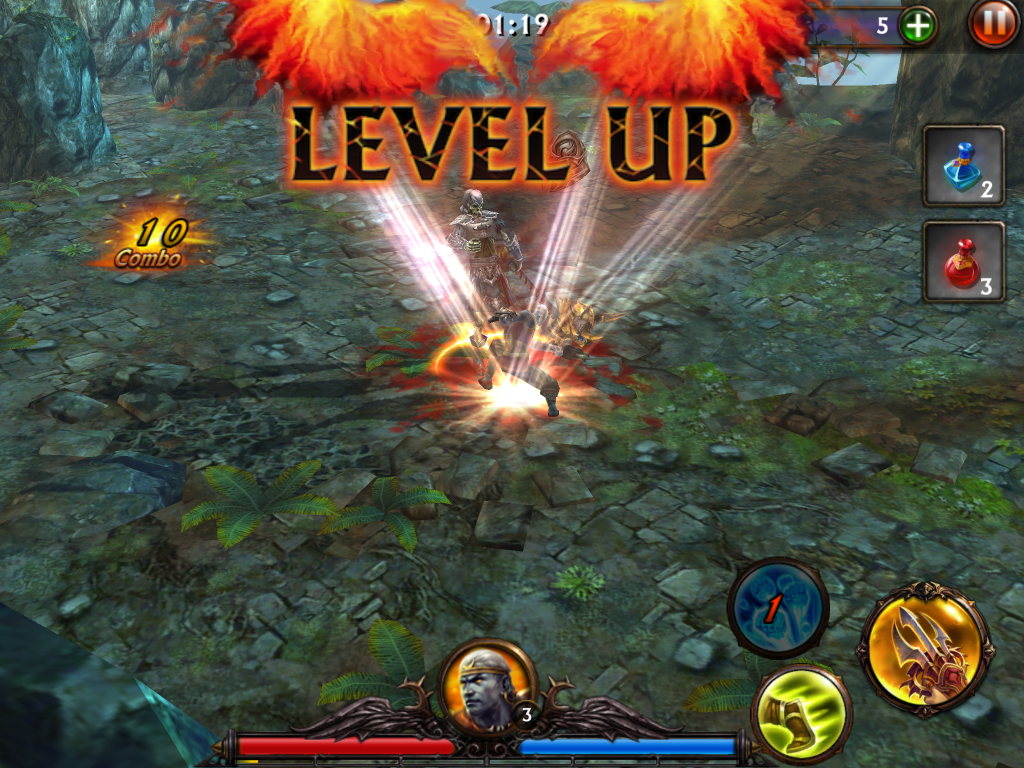 Downing a boss for a well-deserved Level 3.

The levels are also designed very nicely, and some of the skill animations are actually really cool. Everything from downing a boss to smashing open a crate provides a smooth transition and appropriate sound effect to go along with it, again, this game doesn’t have the absolute top of the line graphics, but there’s really nothing to complain about at the end of the day. Hopefully if there is a fourth installment of this series, we can see some jaw-dropping graphics and top of the line orchestrated background music as well.

This is an area of the game that could have easily scored a 9.5 or even a 10, with just a few simple changes, tweaks, and/or fixes. Unlike the graphical department, Eternity Warriors 3 doesn’t need a major overhaul to improve it’s Gameplay, it just needs to iron out some bugs — primarily the one I mentioned in the intro, about enemies going invincible for a couple seconds. This might be an intended mechanic of the game, but sometimes it makes absolutely no sense why the enemy wouldn’t be taking damage at that point in time. It seems to happen randomly, I’ve experienced it when the enemy was in the middle of an attack, standing still, and I’ve even had a 19 hit combo where I did no damage. Some enemies will actually block, and won’t take damage while blocking or they’ll take 1 damage per hit, so I can’t imagine they could should be going invincible in the middle of an attack as well. 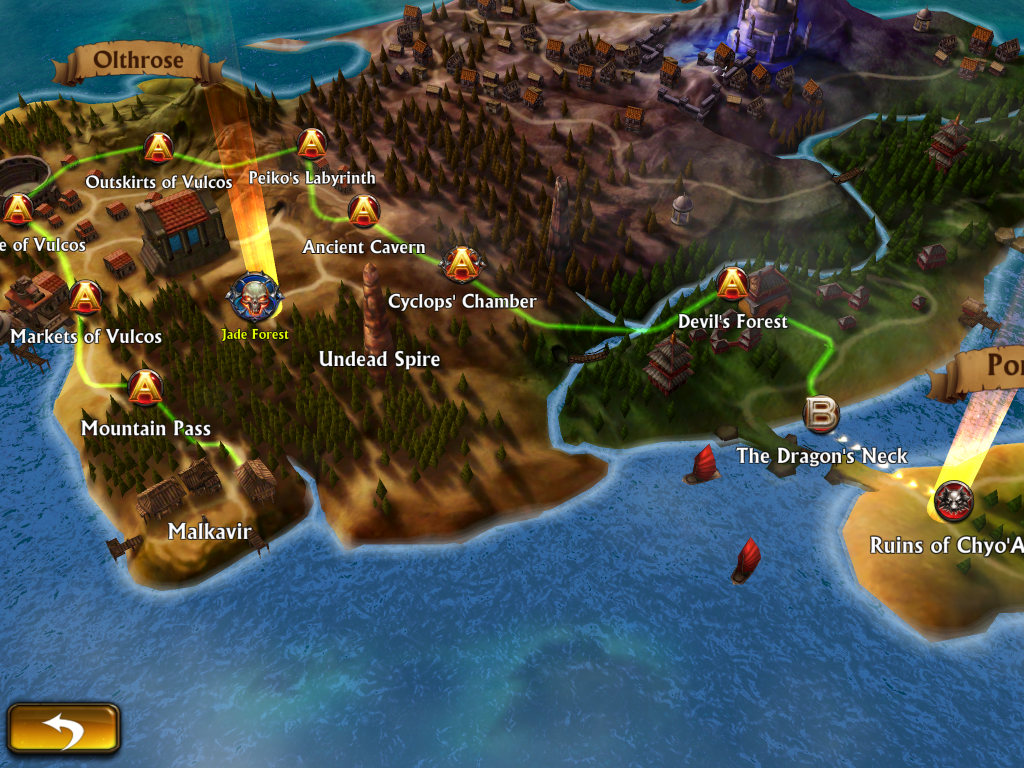 Beyond those unfortunate errors, Eternity Warriors 3 still has a lot going for it. This game provides a huge variety of different things to do, and they are all equally entertaining in their own right, and you can devote just the right amount of time to each one. My usual routine when playing the game was to check my available quests, run a few missions based on those quests, head to my inventory and start fusing/evolving equipment, then check out my offerings, and finally using my ship tickets to do a couple bouts with the Endless Mode. After that, I can usually just repeat the process, or work on completing every single mission with an “A” grade. There’s still even more to do in the game than what I just mentioned, but even if it was  just that five step process over and over, it would still be fun.

What else is there to do you ask? Well, for starters, there’s actually three different classes to play through, essentially tripling the amount of time you can spend leveling up. You’ve also got an array of skills that you can level up over time as your character’s overall level increases. Leveling up your character, can be done by completing quests, or simply playing through missions — these two often go hand in hand, and there’s also the option of leveling through Endless Mode. I could write for hours about the things to do in Eternity Warriors 3, but the best way to find out what it has to offer is to try it out yourself. I will say, that there isn’t an aspect of the game that I find boring or too repetitive, it’s all exciting.

EW3 knocks it out of the park in this category, if you couldn’t tell from how I was raving about the things to do in the game, I really enjoy playing this game — and I enjoy playing it for hours without taking a break :). The developers just did a fantastic job of making every aspect of the game compliment one another so nicely. You can sit and do the same things over and over again, but it is actually a lot more beneficial to go through each mode, as it will end up helping you progress through everything quicker. 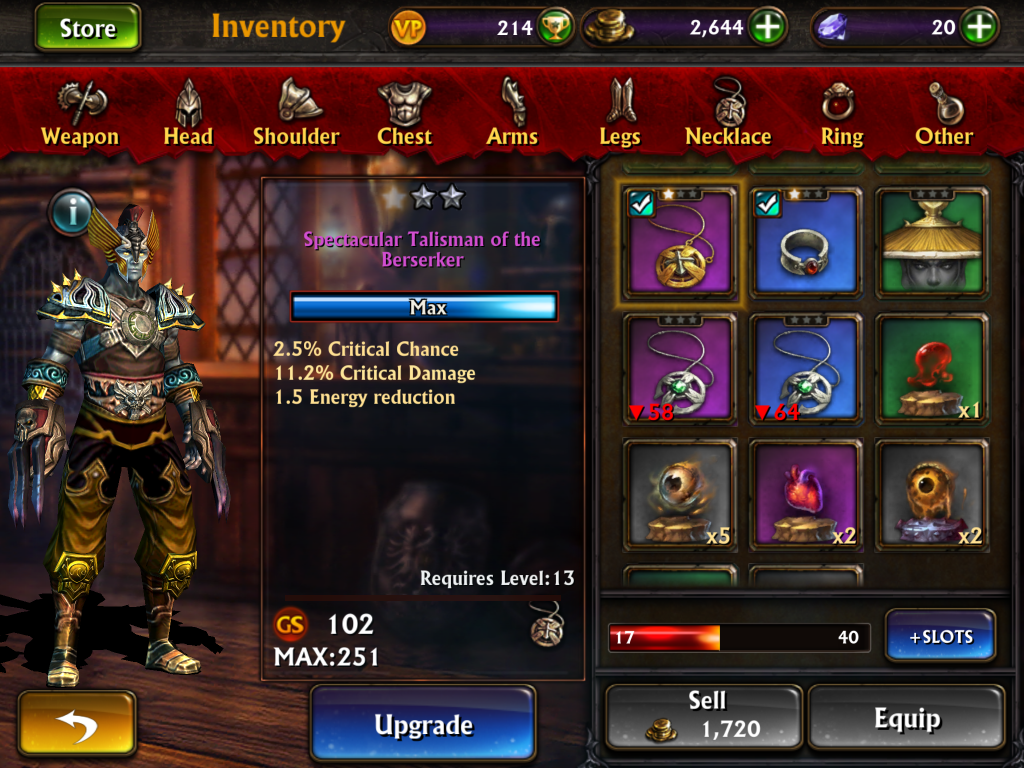 There’s something about farming items that I really enjoy, and more specifically, it’s that great feeling you receive when you finally get a major upgrade on an item. In Eternity Warriors 3, the process goes like this: you’ll get an item that isn’t “leveled” at all, you can then tap upgrade in your inventory with that item and choose to fuse it with other items in your inventory. Fusing items increases the original item’s fusion XP, and once it reaches the maximum fusion level, it can be evolved if you have the necessary reagents. Reagents can be obtained by killing monsters, completing quests, or submitting offerings, and they serve no other purpose than to evolve items or be sold to the shop.

The process of upgrading your items is what really keeps me coming back, and since you’ve got a full set of gear to fuse and evolve, it provides so much to work — all while keeping a steady pace to retain the player’s interest. EW3 does have an in-game store, but I don’t touch it, and that can actually make the game pretty challenging at times since the only way to get a Health Potion is by using gems. You do have the option to watch sponsored videos to receive gems, and this is usually 15 – 30 seconds to receive one single gem, that sucks when you consider the fact that 1 Health Potion is 10 gems. Needless to say, I had a rough time defeating the Cyclops, since his fire ability would take away 80% of my HP. 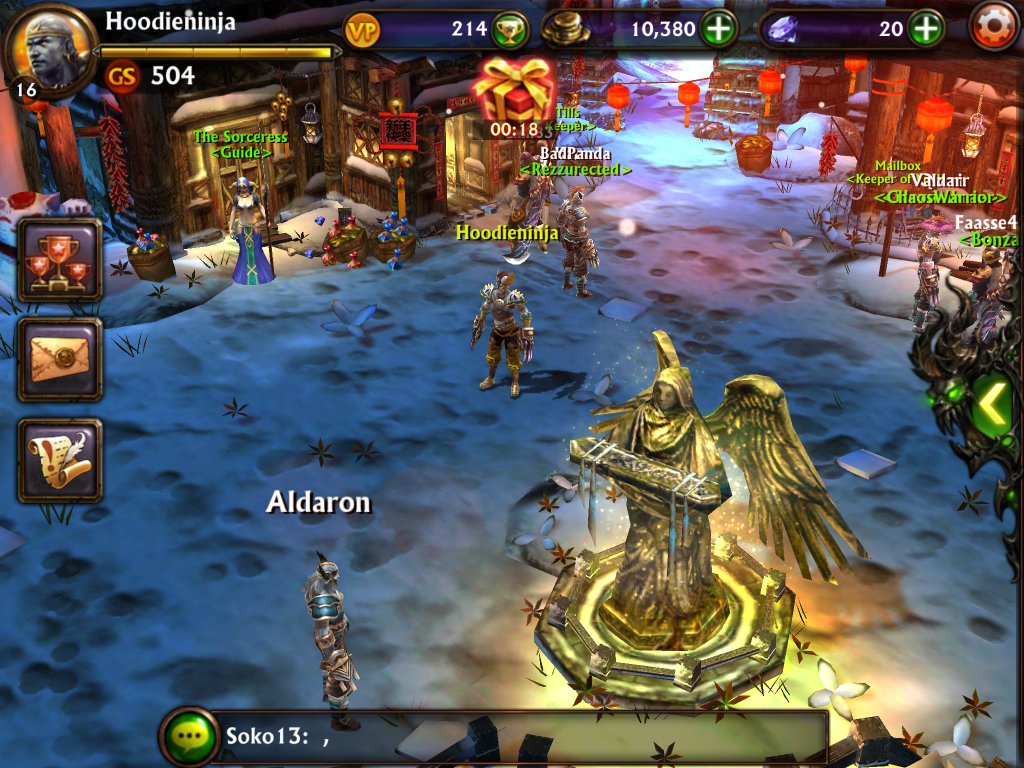 As a whole, Eternity Warriors 3 is one of the best games I’ve ever played on my iPad, and I’m looking forward to getting better gear and leveling up even more. One of the things that’s also nice about the game, is that your character’s Gear Score is always displayed in the home town, so you know where you’re at — and each mission has a recommended gear score so you know if you should even attempt it or not. 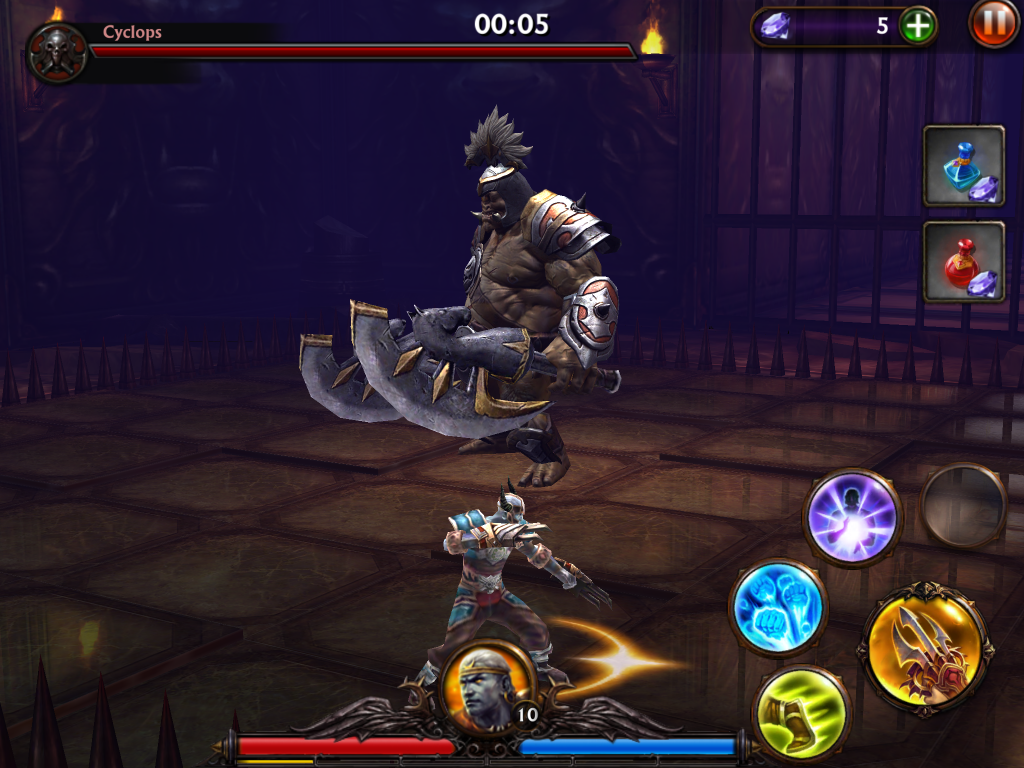 If the 9.3/10 score isn’t enough of an indication, here’s me telling you that you should most definitely download this game on your phone or tablet and give it a shot. It’s a free game, and you don’t need to use the in-game store if you would prefer not to (I certainly do not use it).