I rarely keep an eye on Arcade games like this one, but Evil Brown Eggs has had my attention for a couple of months now for some reason. Originally, it was supposed to be out in September, but was ultimately pushed to the start of October. Now, the game has been out for almost a week, and I’ve had some time to play it and see if it was really worth the wait!

The graphics in Evil Brown Eggs are very simple, and there isn’t a whole lot of visual variety throughout the game, with the exception of your egg customization. Still, the game runs at a very solid frame rate, and the graphics in play are well polished and pleasing to the eye. I don’t mind seeing the same brown eggs all the time, as that’s pretty much the basis of the game, but it’d be nice to see a change of scenery every now and then. Egg customization goes a long way, as there are 50+ costume items that you can unlock and equip your egg with. These include several different egg shells (different colors), eyes, mouths, and hairstyles. It’s a very basic game, and given that, the visuals are above average.

Once you play a few rounds, you start to get the hang of the core concepts, but taking a moment to read the “how to play” is well worth it. The game is centered around collecting nests that appear on screen, while avoiding contact with evil brown eggs — although there are also happy brown eggs which you can collect for extra points. Every time you collect a nest, two brown eggs will spawn, and every 10 nests you collect, a bomb will spawn. If you double tap the screen, you use the bomb and crack open any nearby eggs. Since you have a limited number of bombs, it is important you take out as many brown eggs with each explosion as you can, otherwise you’ll have even more eggs to weave through.

In total there are three different game modes you can play, although the multiplayer mode is a bit iffy. For the most part, you’ll be playing normal or rush mode. Normal mode simply tasks you with collecting as many nests and happy brown eggs as possible without dying. Rush mode starts with a 30 second timer, and you can add 2 seconds to the clock by either collecting a happy brown egg, or cracking an evil egg. You can crack multiple eggs at once, so if you use a bomb that cracks 6 eggs, you’ll get 12 more seconds. After you master the basic concepts of the game, you start to get hooked trying to beat the highest score and unlock all of the costume options.

By far the biggest flaw in Evil Brown Eggs, is the intrusive advertisements. I understand that it’s a free game, but I’d much rather pay $1 to get these ads off of my screen (as is the norm with f2p ad-driven games). Even so, I can normally tolerate ads, but these are just a tad bit ridiculous. There were a couple of times when my screen froze after accidentally tapping on an ad, as well as times where I accidentally tap the overlay ad at the bottom of the screen in-game. If the full screen ads between rounds must stay, that’s fine, but the in-game ads are quite frustrating.

The game involves dragging your finger to move your egg, but you don’t need to hold your finger over the egg. I was foolishly doing this for a couple of rounds, before I realized it’s a lot easier to use the bottom of your screen to move your egg so you can see where you’re moving all the time. You can also adjust the sensitivity to make your egg move faster or slower in correspondence to your finger, which is extremely useful. One other problem I had, was if you move your egg over a nest before it spawns, you’ll have to move off of it and back on to collect it. I’m not sure if this was intended, but it seems to make more sense that you’d just collect it if it spawns underneath you. 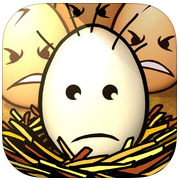 A really fun game that is free to play, and offers just enough replay value to keep you coming back for more. Slightly hindered by intrusive ads, but overall well worth the download. I’d say it is more fun than Flappy Bird, but I doubt the success will be quite the same.