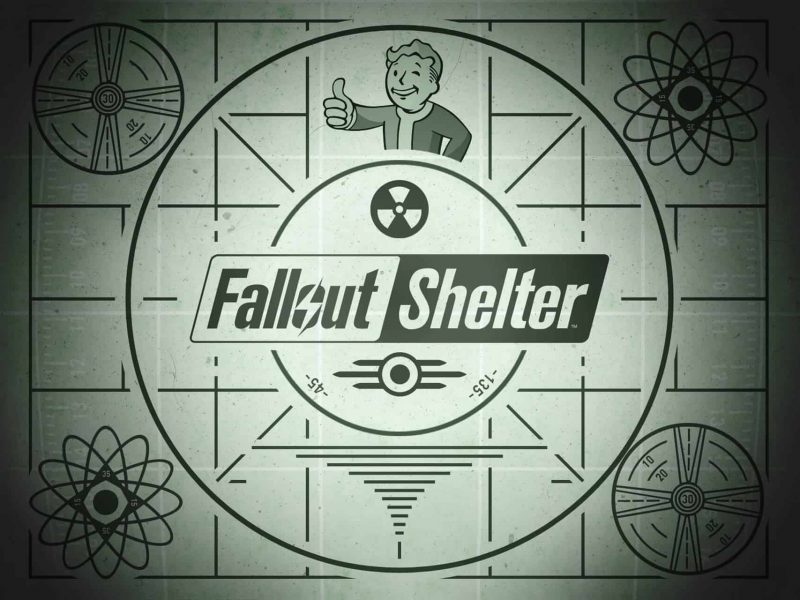 Following the huge announcement for Fallout 4, Bethesda decided to also release the first ever mobile game in the Fallout series, to coincide with all the hype surrounding their big reveal at E3. Instead of exploring a vast post-apocalyptic wasteland, you’ll be overseeing an entire vault and it’s inhabitants — assigning jobs, building new rooms, and strategically defending against attackers and disasters. It’s something we’re more accustomed to seeing in the mobile market, and although an official port of Fallout 1 or something along those lines would have been awesome to see, this is what we’ve got for now.

Keeper of the vault

After you’ve selected the three digit number for your new vault, it’s time to greet your first inhabitants and start building a few rooms to produce resources. This sets the premise for what you’ll be doing for the rest of the game, even though you’ll be unlocking new buildings; the concept of keeping resources above the required line and growing your population remains the same throughout the game. It certainly sounds repetitive in writing, but there’s no denying the enjoyment that Fallout Shelter has to offer when you start to see your vault getting build from the ground down.

The design of the game looks like someone said “let’s make the game look like Vault Boy”, and it works really well for this type of game. On top of that, it really makes it feel more like a Fallout game, without actually looking anything like the rest of the series. It’s also really well done, everything including, the unique character models, the natural disasters (and the inhabitants reactions), and the way the rooms slightly change with each upgrade. Overall, I really enjoyed how the game looked, and it makes it easier to come back to knowing that I’ll be visually expanding something that appeals to the eye. 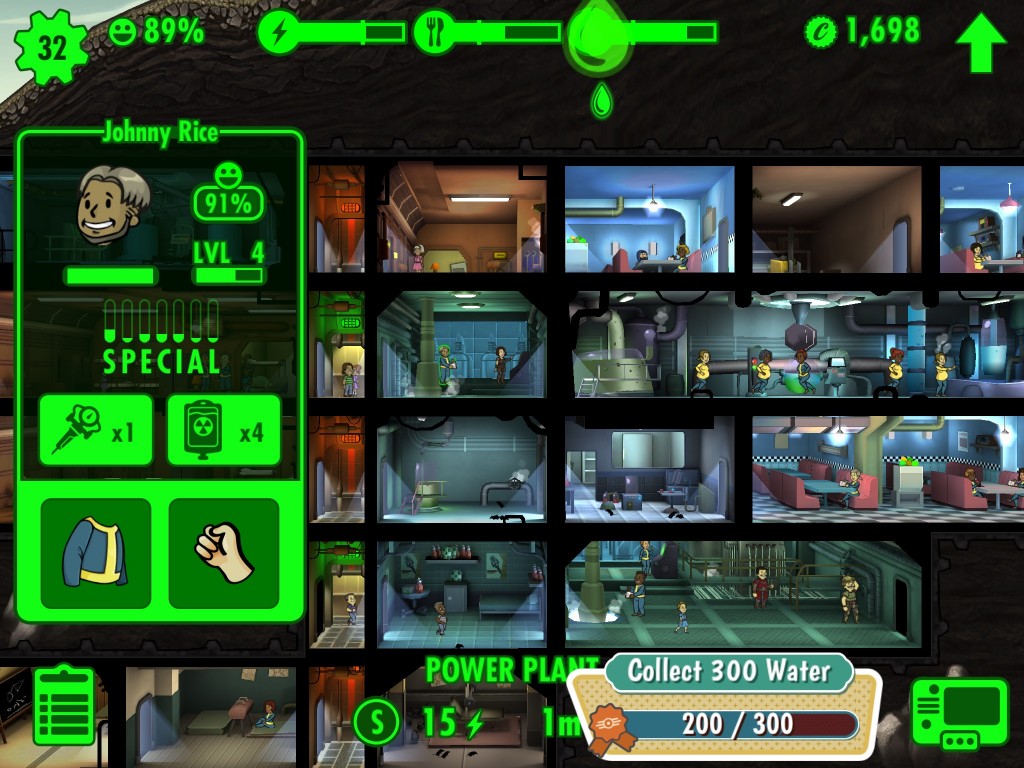 A couple of bugs and annoyances with the Interface were unfortunate. Some were usually fixed by themselves within a few seconds, but others require a full game reboot. For example, every so often when one of my female vault dwellers became pregnant, you wouldn’t be able to move her to a new location afterwards until you restarted the game. There’s also a bug where a vault dweller’s health bar would get stuck above their heads until a reboot, which was annoying, but not as bad as not being able to put a dweller to work. Not necessarily a bug, but every so often two vault dwellers stack on top of each other, making it hard to drag one specifically — although you can assign them in other ways.

Despite how extremely depressing a post apocalyptic world is, the Fallout series has never really been one to take itself too seriously. There has always been wise cracks and inappropriate jokes to lighten the mood a bit, and that’s a bit heavier in Shelter. If you zoom in on any given room, you’ll be able to read the conversations between the dwellers there. Not only does this provide comic relief at times, but also helps you see someone’s displeasure if they’re in a room that doesn’t suit them. You can also put yourself in a comedic situation if you’re trying to get a male and a female to reproduce — but they’re actually related, so when you zoom in they’re just talking about spending time with family.

While we’re on the topic of reproduction, I found it funny how early on I had to use one of my dwellers (who looked like an old man) by the name of Donald Harvey to impregnate almost all of my females. I only had two males, and Donald was the only one with good Charisma, so he essentially become the stud of the vault. He was able to make a baby with half of the women in the vault before Richard Harvey got lucky with one. To this day, Donald is still my go to guy when I’m looking to up the population in my vault, which lucky for him, is pretty much all the time. 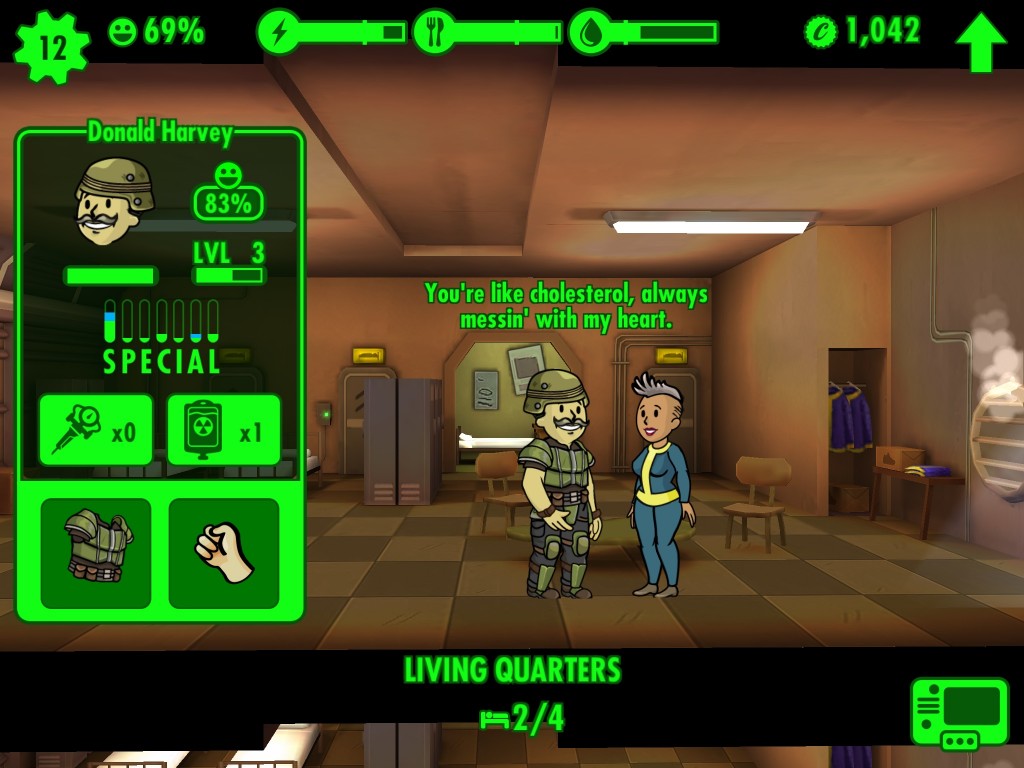 This is just one instance of getting to known the dwellers of your vault, which becomes a crucial part of your success as an overseer. Early on it’s easy to just look at the stats of your 10 dwellers and go off of that every time you want to assign a job or perform a task, but once you start getting 30+ dwellers, it really helps to know a handful of them on a personal level. You likely won’t be able to keep track of everyone, but it’s really useful having a few go-to dwellers like high luck explorers, intelligent scientists, and of course a stud like Donald Harvey who is overflowing with Charisma.

Always something to do

One of the things I really like about this game is the fact that you can either sit down for a couple of hours and work closely with your vault, or you can check it throughout the day and still get a lot of things done. The resource rooms are collectible within a few minutes after the last collection, whereas other rooms like training facilities and radio rooms are far less frequent. Using the rush feature makes live play of the game a bit more interesting. Rush is a way of speeding up the timer, but instead of costing premium currency, it has a % chance to cause a disaster in the room you’re speeding up. This chance increases with continuous attempts, and decreases with time and dwellers luck.

Sending a dweller out into the wilderness on a supply run is one of the more important things you’ll need to do, and typically one of the lengthier processes. Usually, you’ll want to send any dweller with a high luck, endurance, or both out on a run — as they’ll last the longest, and bring back the best loot. Depending on their stats and gear, they can last for several hours, but certain encounters can weaken them pretty quick. You’ll need to make sure they are stocked with medkits and radaways, otherwise you’ll end up spending caps to revive them. 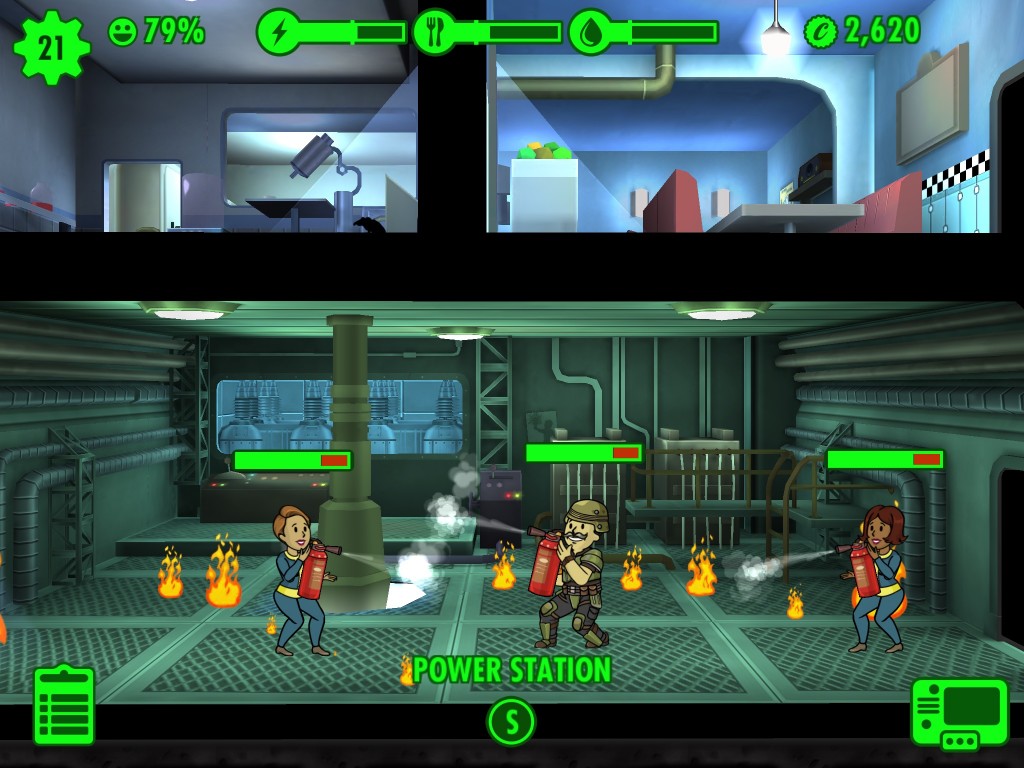 While the game is active, you’re susceptible to disasters that occur at random, similar to the ones that have a chance of occurring when you use the rush feature. The one additional random event is getting raided by bandits, who will run around the vault attacking your dwellers. These are extremely annoying to deal with for a number of reasons, and the biggest reason is that the dwellers you send to the vault door in defense won’t follow the bandits if they go into another room. In the middle of combat the bandits will decide to go somewhere else, and your defense dwellers just stand there and smile. The other annoying part — they don’t even drop their gear!

Overall, there were only a couple of miscues in the game that stood out, but I still really enjoy playing Fallout Shelter. It’s a mobile game loaded with personality, and plenty of things to keep you coming back. The biggest replay factor is simply seeing your vault grow, but it would have been nice to see some sort of multi-player mode as well, even something very simple. Perhaps we’ll get an update with vault raiding in the future, but in the mean-time there’s still plenty to do.

It is a free to download game with very lenient IAPs, the only thing you’re able to spend money on in the game is something called lunchboxes, which give you four random rewards. These rewards could be a few hundred caps, some new armor or weapons, or even special rare dwellers that come pre-loaded with high specialty stats. I’ve seen a lot of people complaining that they’ve only gotten good items from paid lunchboxes, but I’ve gotten some decent loot from sending out high luck dwellers into the wasteland.

Buying lunchboxes will definitely speed up your progress, but I’ve been enjoying the game 100% free. As for the rare dwellers, it seems these are only obtainable through the lunchboxes. There may be a tiny chance you find one from the radio tower, but the chances of finding a standard dweller are already slim with that method. Overall, I think this is one of the more fair pricing structures for a freemium mobile game I’ve seen in a while.

Fans of the Fallout series should at least enjoy the connection to the beloved PC/Console series, and those who appreciate a good base building game will likely stick around for more. It’s easy to pick up and play for hours, or set down and allow things to happen passively — and either way you’ll get some satisfaction. Now, it’s time to see how far you can expand you vault before November 10th when Fallout 4 is officially released.