One of the very first games to really propel the ‘pay-to-win’ game structure to the top, was the original Farmville for Facebook. Now, several years later, the game has evolved into something a lot better — and best of all, something not so focused on purchasing success. Well there still are plenty of opportunities for you to spend money on the game, it is not entirely necessary, nor is it really that much of a game-changer in most situations.

So if you have been turned off by this game series from a poor experience in the days of the original Farmville, don’t write off the mobile sequel just yet.

I logged into my farm from the original game just to remind myself of what the graphics used to be like, and I spent about 10 seconds looking at the eye sore of game before shutting it off. Farmville 2: Country Escape is much easier on the eyes, and overall, it’s a treat to watch your farm animals/farmhands dance around when you interact with them. You’ll end up looking at the same stuff a lot of the time, so it’s important that stuff looks nice — and it does! Each crop has different ‘stages’ of growth, where you’ll see a visual change that gives you an idea of how much longer it needs to grow, although you can also just tap it to find out an exact time. 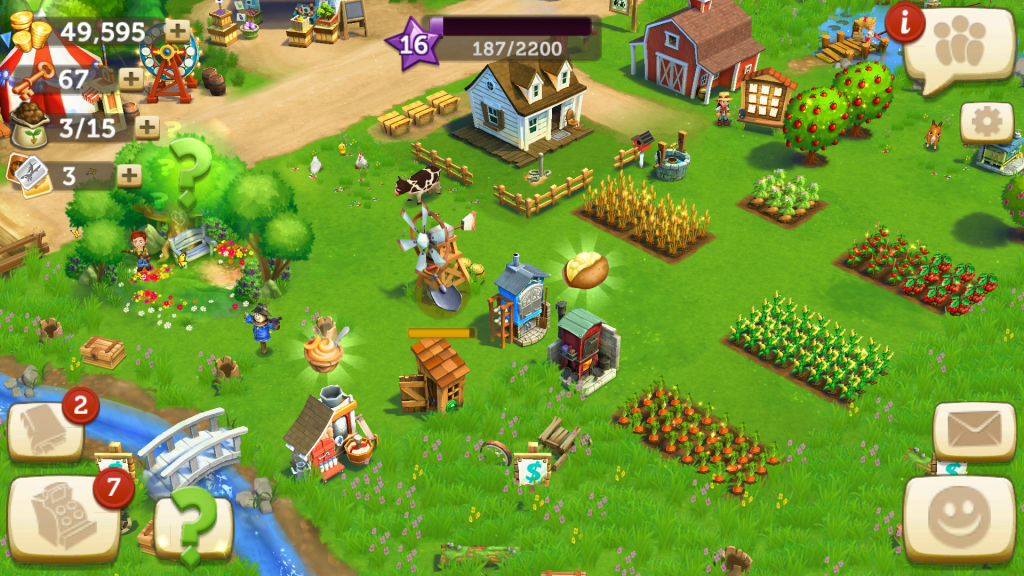 Animals will walk around (within the means of their confined square) when idle, and when you feed them, their graphic will change and display them eating the feed. These are just a few minor examples of the ever-changing visuals in Farmville 2, and there are plenty more that I could go on about. What I’m mainly trying to get at is that there’s always something that just appeals to the eye, and when a majority of your time is spent watching crops grow and animals eat food, it’s really important that you can enjoy the aesthetics.

One of the things I love about Farmville 2: Country Escape, is that it doesn’t have a gameplay system where you tend to your farm for 10 minutes, and then wait four hours for everything to finish growing. Of course there are some things that take time to grow and make, but there’s also quite a bit that will grow in just a few minutes or even less. For the most part, once you reach level 10 or so, you’ll start to notice that there’s always something you can be doing to improve your farm or earn some extra coins. 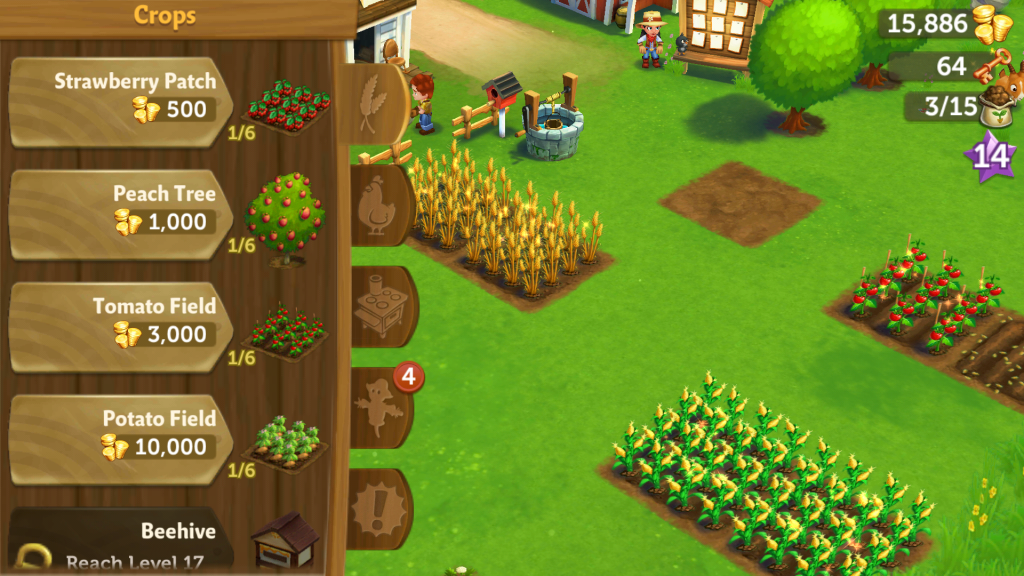 The process of the game usually goes as follows: water plots and trees to harvest crops/fruits/etc, use harvested goods to feed animals, go foraging/fishing, or combine them into another item. Throughout this process, you’ll want to be checking the order board and trying to fill orders as often as possible — this is going to be your main source of XP. You can receive XP from foraging/fishing as well, but these will have timers ranging from 15 minutes – 8+ hours, so it’s not the most viable way to level up.

Barn space is something that really sucks about this game, and it’s really hard to increase your barn space without spending some money on ‘keys’, which are used to speed up any process or unlock certain items. Now, you can increase the space by getting the items through foraging, but it’s never a guarantee you’ll get them, and I’ve gone through 15+ foraging expeditions trying to get one final item I needed to upgrade, and it just never came. Fortunately, keys can also be obtained from completing quests and opening chests, so you’re able to get through the first few upgrades pretty easily.

Farmville 2: Country Escape, can get you hooked pretty fast. The fact that you’ve got something to do pretty much all of the time, and that everything you do is at least somewhat useful, is a major contributor to this fact. However, going back to barn space, there are times where you can literally be stuck with nothing to do because your barn is full. This can be avoided with some preemptive thinking, but often times it will sneak up on you. What happens is when your barn gets full, you can’t harvest anything until you free up space, so if you can’t make any new items and you can’t fill any orders, your options are very limited. In that situation, you can either send goods to your Facebook farm, or put them on the open market for other players to buy (unless these are unavailable too, in which case you just have to wait until the order board refreshes). 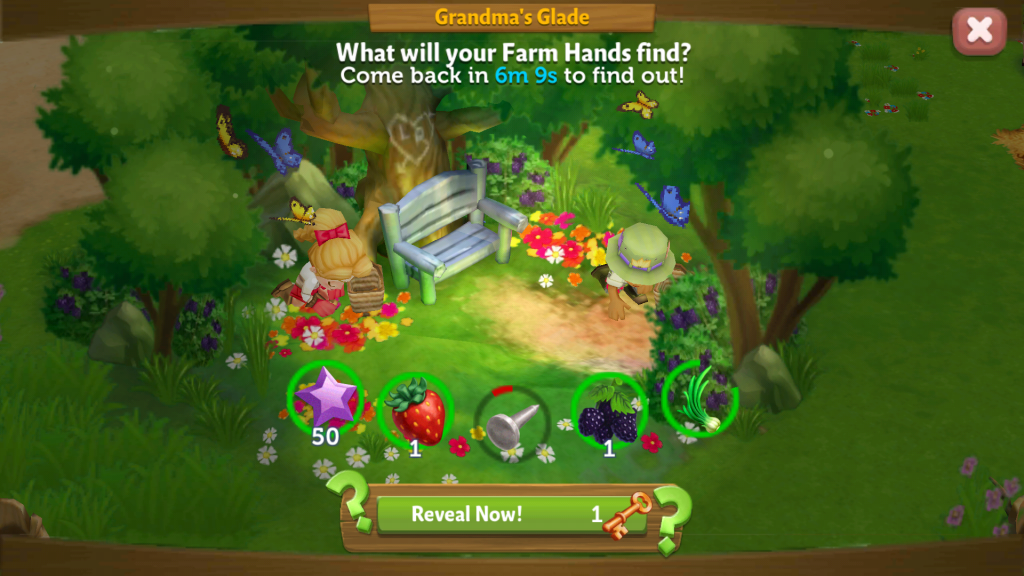 The open market that I just mentioned is another huge part of the game, and one of my personal favorites. You’re able to sell your goods to other players across the world, as well as within your own “co-ops” which pretty much just allow you to buy/sell goods with your friends. By using the market effectively, you can actually level up without doing anything else, simply by buying what you need for the order board from the market and re-selling to get the XP. You don’t gain XP from selling on the open market, so you’ll see higher prices than what the order board offers, but every so often people will throw things up at the base price (you can also re-sell these posts to make some extra money).

I didn’t expect much Innovation going into FV2, but there are quite a few things that I really liked about the game that I haven’t really seen before in similar titles. For example, you can easily play this game on an Android phone and then switch to an iPad and pick up right where you left off — I know this isn’t unique to FV2, but it’s a really nice feature that more games need to start implementing. One thing that I really didn’t like about the old Farmville was how it eventually became a matter of doing the same things over and over again for a few days, then doing a new thing over and over again — you never feel that way with Country Escape, instead, you’re always doing a lot of different things and eventually just adding more things to that list. 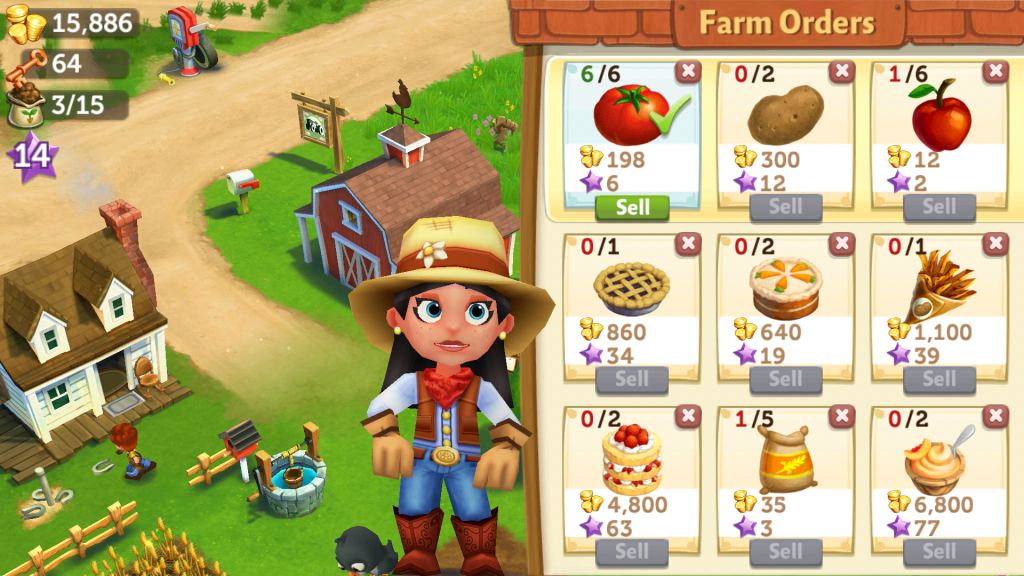 I also love how the game is integrated with the Facebook version, and you can send goods to/from either of your farms to help the other one out. It is extremely beneficial to play both games, because some items are really easy to obtain in the Facebook version, but those same items are extremely useful in the mobile version but not as easy to get. Now, there is a limit of 15 items that you can send every few hours, so this can’t be abused to where the game just becomes a repeated process to make big money.

A lot of people are going to hate on this game just because it’s Farmville, and it’s an easy target to poke fun at, but honestly this is one of the best social games out on the market right now. Like I said, you don’t need to spend money to play it efficiently, you’ve always got stuff to do, the game looks great, and it’s fun to play regardless of age or genre preference.

Click here to check out Farmville 2: Country Escape on the Google Play Store!

Click here to check out Farmville 2: Country Escape on the Apple App Store!

What did you think of the review? Have you played FV2 mobile yet? Post your thoughts and comments below!