Furious 7 hits theaters this week, and to coincide with that, there was also a new mobile game released this week based on the popular movie series. Fast & Furious Legacy is a racing game, so it takes you back to the series roots where some of the focus was still on actual racing as opposed to unfathomable action sequences (which are awesome). As much as I love the movies, but expectations weren’t too high going into this one, but let’s see if F&F Legacy can surprise!

It just wouldn’t be Fast & Furious without fast and flashy cars, and that’s what you get with Legacy. There is a considerable amount of detail on each vehicle, and a wide variety of customizable options for each one as well — whether or not you can afford to deck out your car is another question. As for the race-tracks and other visual aspects, they aren’t quite up to snuff with the vehicles, but definitely not bad either. Some of the backdrops look pretty good, but pretty much every track gets old after a while due to too much repetition without enough time in-between. 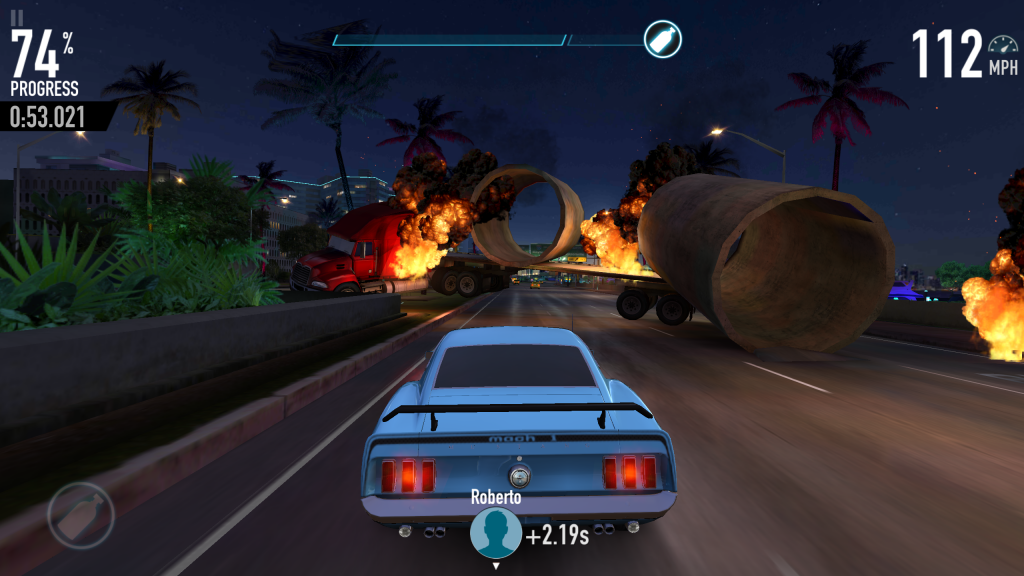 Performance was quite good, I never had any lag running this game on my Note 4, even at high speeds with a lot of action going on around my vehicle. One thing that is quite noticeable however, is the painfully long loading times — it isn’t so bad when you’re finishing a race and going back to the menu, but it honestly feels like it takes longer to load a drag race than it does to finish one. All of the UI aspects are very sleek, and are quite visually appealing, which is another factor in Legacy’s relatively solid graphics across the board.

A quarter mile at a time

As good as Fast & Furious Legacy looks on the outside, is just about as boring of a racing game it is on the inside. Throughout the game, you’ll participate in three major types of races, and they’re as standard as can be: street race, drag race, and drift race. These three races are broken up into four different game modes: Story, Challenge, Ranked, and Crew Battles. Regardless of which game mode you’re playing, the actual race is essentially the same.

Every race starts out with a little gimmick where you need to get the acceleration needle in a small area and push a button right on go. For street races, you tap left or right to lane change, and push the NOS button to deplete your boost. You can refill your NOS by drafting behind other cars, or performing a quick lane change right before you would crash for a “Close Pass”. Alternatively, there is always a ramp you can jump for “Air Time” to score more NOS. 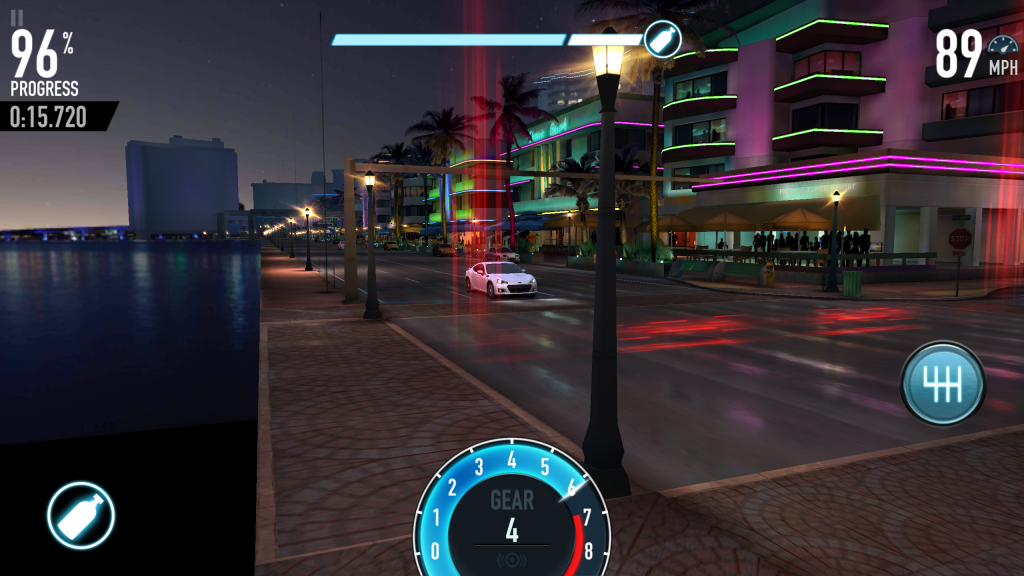 Drag races are simpler, as you don’t need to worry about changing lanes or avoiding pedestrian cars. Other than using your NOS as effectively as possible, you’ll need to shift your gear changes by pressing a button at the right time, and if you get a “Perfect Shift” you get a bit of your NOS back. Drift races are against another car, but it will be a ghost car so there’s isn’t tons of crashing going on while you’re trying to race. You simply move your finger left or right to drift a certain direction, and move it further to perform a wider drift. There is a small constant directional marker on the road, which gives you extra NOS if you stay in the green while drifting.

Other than everything I’ve just mentioned, there really isn’t much more to the actual Gameplay in Fast & Furious: Legacy. Every so often you’ll have an encounter with the police during a street race, which basically negates anything that occurred during the race. Oh, and when the police arrive, they really arrive, with upwards of 20 cop cars filling up the streets out of nowhere, and all of the pedestrian vehicles magically disappear. Overall, the game is just about as realistic as the series currently is, which makes no difference in my book — but unfortunately doesn’t change how stale the Gameplay ended up.

There’s a hint of charm when you first start kicking it into gear with Fast & Furious: Legacy, but sadly, it quickly goes out the window once the grind begins. I go into any big-name freemium game expecting a bit of a grind, and I can definitely tolerate it in most cases, but this game just feels like you’re chasing the dragon, so to speak. Nearly every race feels identical after a while, and since the game revolves around a few timing based mechanics that are very simple and easy to master, it turns into a game of simply farming enough currency to upgrade your vehicle and progress in Story.

Basically how it works, is that you’ll play Story missions (likely on your primary vehicle, whichever is most upgraded) until it becomes literally impossible for you to win. Then, you’ll do Challenge/Ranked races on your other vehicles, and spend the rewards on upgrades for your main one. Challenge races are typically so easy it becomes a bit mind-numbing, and Ranked ones get harder as you progress through the ranks, but the ranks eventually reset after a few days. Story mode simply yields the best rewards by far (including premium currency), which is why you end up prioritizing those races. 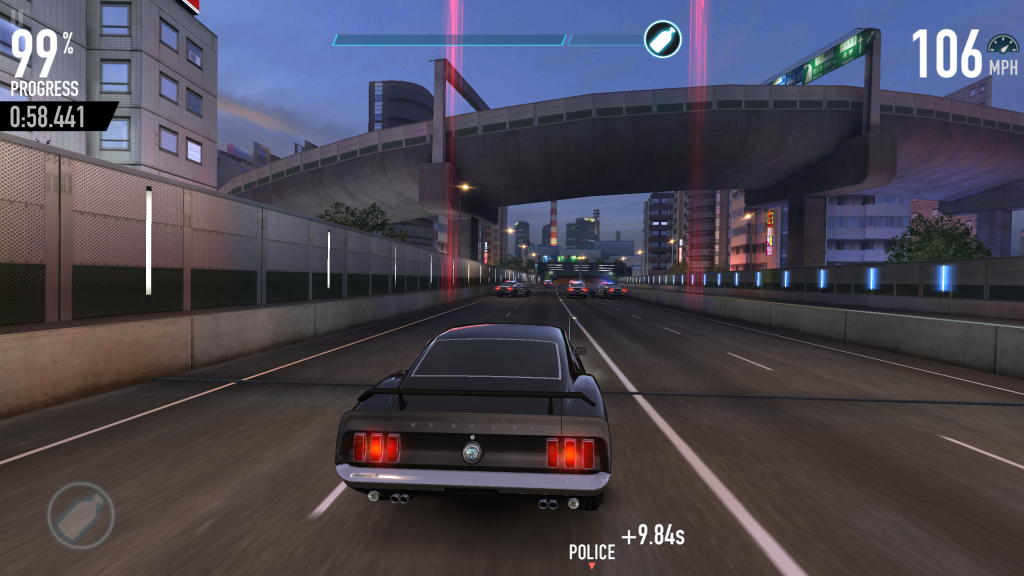 One other aspect that throws a wrench into the equation, is the oil change. Your car gets five races before it’s due for an oil change, which takes an upwards of two hours depending on the car. It’s a sneaky little energy mechanic that is actually really annoying, because you only have one mechanic who can perform an oil change (unless you spend gold on more mechanics). Ultimately, you’ll most likely end up only getting oil changes in your main car as well, leaving the rest unfilled until you level up.

Sadly, the inevitable grind really places a hindrance on your ability to invest upgrades into multiple cars, since it is in your best interest to continue progressing in the story — which means funneling all resources into one vehicle. The upgrade system itself isn’t all too exciting either, with five different areas you can upgrade a few times until they are ready for a stage upgrade which requires a part you’d receive from racing. After that, the process repeats, but this time with waiting timers!

The only available IAP is different amounts of Gold currency, which can in turn be used for a variety of different things — such as vehicle upgrades and timer reductions for oil changes. Certain things can be purchased only with gold, like guaranteed car crates, and any customization you want to do to a vehicle (paint-job, decals, body kit, etc). Gold is also awarded by playing the game, with a consistent and decent amount coming from Story mode and leveling up. You can also score gold from reaching milestones in ranked battles.

Although the game can be played without spending money, there will be a lot of waiting involved if you don’t spend what equates to between 50 – 75 cents per paid oil change. Cosmetic upgrades are typically out of the budget if you want to fill up your garage sometime in the next three months. The IAPs could be worse, but it’s definitely not ideal to play without paying.

Fast & Furious: Legacy gets some points for it’s flashy cars and initial appeal, but quickly turns into something that just drags on with little to keep you interested. Those who follow the movie series may appreciate a few nostalgic aspects of the game, but as far as being a serious racing game, there are much better choices on the mobile market.