After spending the night with Five Nights at Freddy’s, I’d say my list of the Top 10 Mobile Horror Games needs a bit of updating to make room for this game. I’ve actually had this sitting in my game library for a couple of weeks, but didn’t get around to trying it out until I saw my wife playing it. There’s no other way to play a scary game than in a dark room with headphones, and that’s how I approached this one — even though my wife couldn’t handle playing it for more than a couple of minutes in the middle of the day.

I won’t lie, it’ll most likely get a few jump scares out of you by Day 2, and the overall intensity of the game is wonderful. Still, the gameplay can come off as boring depending on the player, especially if you’re not one to get scared easily. Overall its a really fun game, and one that’s perfect for having your friends play, but definitely not one you’ll play on a daily basis.

If I were to judge this solely on the overall quality of the graphics, Five Nights at Freddy’s wouldn’t score quite as highly as it ended up. However, when you’re talking about a thriller/horror game, a huge part of the Visuals needs to be graded based on how well it can scare you. The story of the game essentially follows a security guard working at a knock-off of the famous Chuck E Cheese chain store, and he’s tasked with keeping tabs on the store’s animatronics. See that picture above? Yeah, that’s one of the animatronics standing outside of your security office. If you give him enough time, he’ll make his way into the office and eat you — or at least that is what I assume happens when the camera goes fuzzy. Looking at the picture might not make you jump out of your seat, but when you’re sitting in a dark room with headphones and you turn to see that dude just standing there staring at you (accompanied by a generic scare noise), it’s a little different.

The majority of the game is spent in that room, looking to either the left or right side. You can flip the .light on to see if something is standing in the doorway, but this uses up your power. Other than that, you can pull up the security system and look at any of the cameras to see where the animatronics are at. It maps out the camera locations, so you can see how far away they are from your security room as well. Overall, the game doesn’t look fantastic, but its definitely creepy enough

Like I said above, the majority of your time will be spent in the security room. You can tap the left or right sides of the screen to look in either direction, and then you can either turn the light on or close the door. If you do either of these things, you’ll lose power at a faster rate — although it should be noted you’re always losing power. The goal is to reach 6 AM, which only takes a few minutes, but surviving isn’t as easy as it may seem when you have limited power.

Viewing the cameras also uses extra power, so you’ll want to be checking them quickly to ensure you don’t run out. Once you’re out of power, it’s only a matter of time before you get eaten by the animatronics. If you keep a close eye on the cameras, you shouldn’t have to use power flipping the lights on until you know the bad guys are close. Still, a quick flip of the switch to see whats up, and then turning it off again, is usually the best course of action. 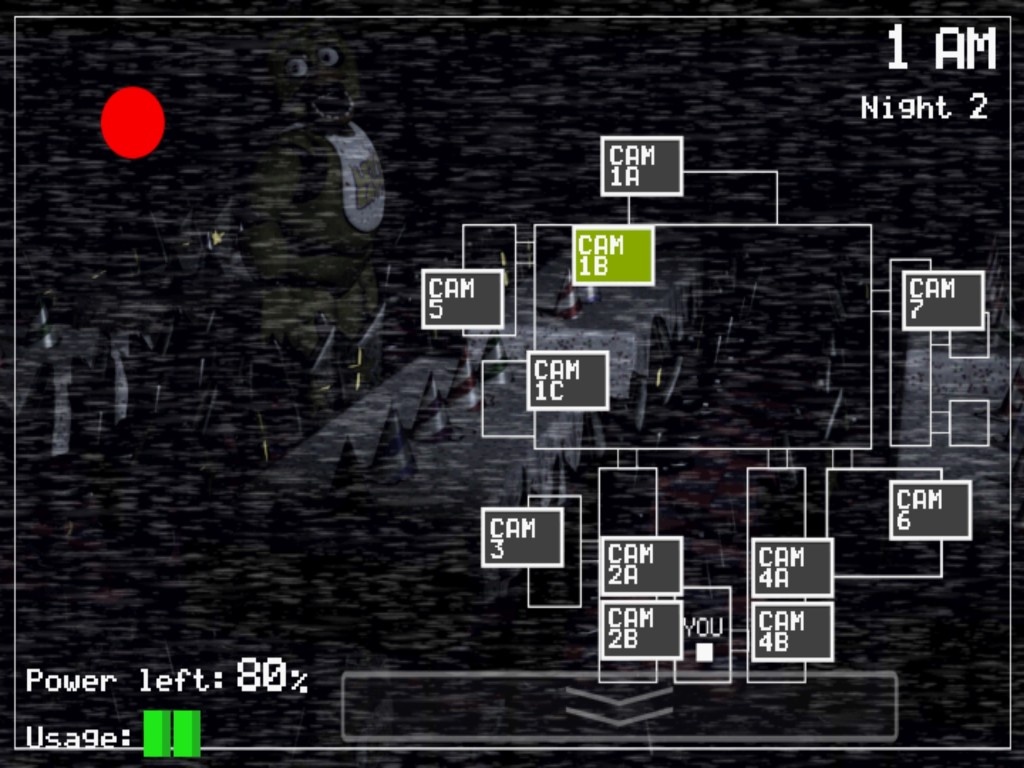 If there is something in the doorway, you’ll have to quickly close the door and wait for it to go away. Sometimes it will leave instantly, but other times they’ll hang out for a while and still be there when you open the door. As you make it through each night of the week, the game gets progressively more difficult and requires better power management and a bit more luck as well. To me, the gameplay relies a bit too much on random variables, but it’s still simple and really enjoyable the first few times you play.

Five Nights at Freddy’s has a pretty solid UI throughout the game. There is hardly any menu navigation required whatsoever, since you either start a new game or continue where you left off previously. As for the in-game controls, you only have to worry about a couple of different actions, and they are all easy to execute with touch controls. The door/light buttons can be a bit unresponsive sometimes, but this can also be attributed to the panic affect of the game, and also adds a bit to difficulty.

Navigating between cameras is very easy since you can just tap on whichever one you want to look at, and since they’re mapped out, it makes it even easier to check all cameras in a route. At times it seemed a little clunky trying to go in and out of the camera interface, but overall there wasn’t a whole lot of issues with that. 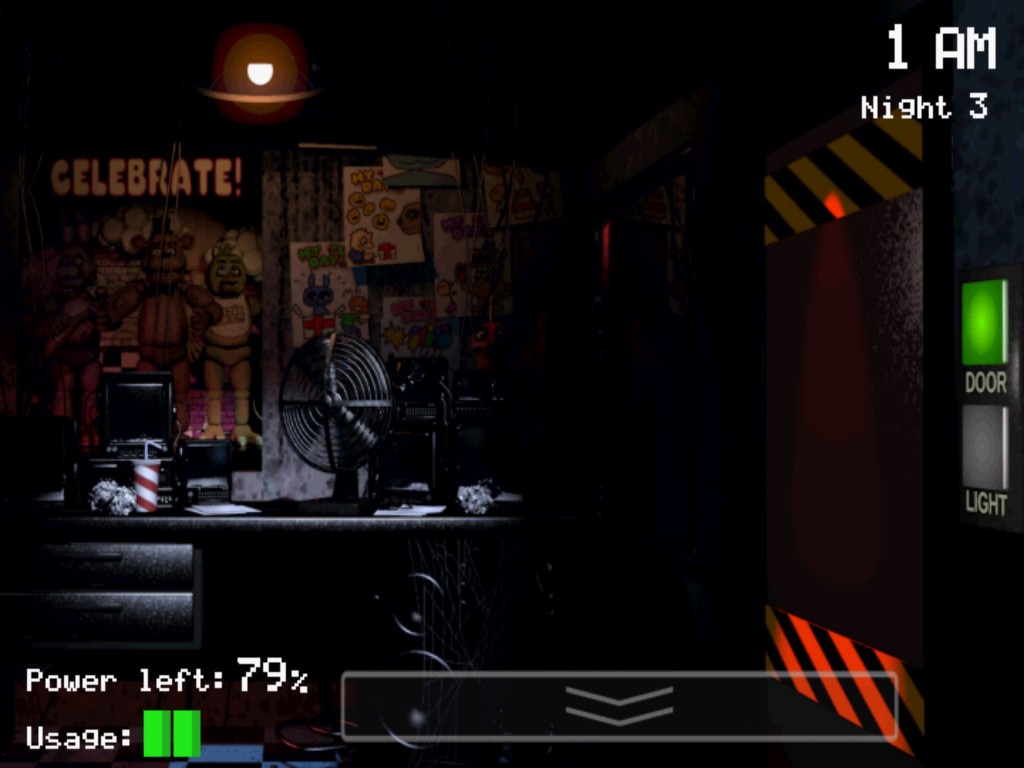 Overall, I was pleased with the Interface, and it didn’t create any issues with the gameplay. The only things I found were very minor, and always manageable. I also liked how all of the information you needed to know was on screen and not overlapping anything you might want to keep an eye on. Current time, power left %, and current usage are all right there.

Despite the fact that Five Nights at Freddy’s is exciting, scary, and can be a lot of fun — there’s nothing that would merit anything more than a decent score for Replay Value. Everything I’ve explained so far pretty much explains the entire game. You simply need to stay alive for five nights (with a break in-between each night), and the core gameplay concepts remain the exact same throughout each night. 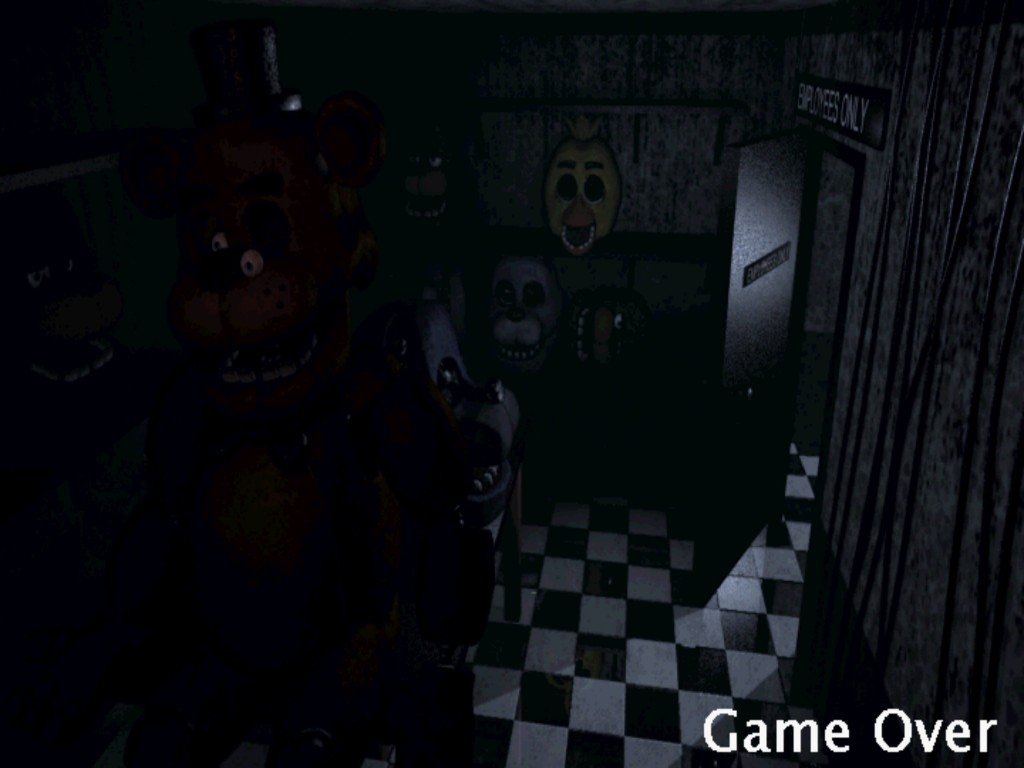 The only real difference between each night (other than a new voicemail recording), is an increased difficulty, which is to be expected. Sure, by the time you reach Night 4, the game becomes extremely difficult — but that doesn’t really do much for adding replay value. You know what you’re going to get every time you play the game, and it unfortunately gets pretty repetitive. It would interesting to see another game mode where you try to stay alive for as long as possible in an endless night (or maybe 6 actual hours), and you need to collect more power somehow (no, not through an IAP).

At the end of the day, replay value is still only one category, and scoring a 3 here isn’t going to be the major deciding factor in Five Nights at Freddy’s final score. It would surely benefit from a change of pace now and then, but it’s still a very good ‘scare game’.

Five Nights at Freddy’s is a very simple game that will do it’s best to try and give you nightmares about animatronic ducks and bears. It can be a lot of fun in the right setting, and it’s always interesting to see your friends/family reactions to playing it — but once you realize there isn’t much else there, it doesn’t seem as fantastic. Still a good game, but compared to other games on the mobile market, your $3 could be better spent if scary games aren’t your cup of tea.

Click here to check out Five Nights at Freddy’s on the Apple App Store!.

Click here to check out Five Nights at Freddy’s on the Google Play Store!

Let us know what you thought about the review by leaving a comment below, and feel free to share your experiences with Five Nights at Freddy’s as well!