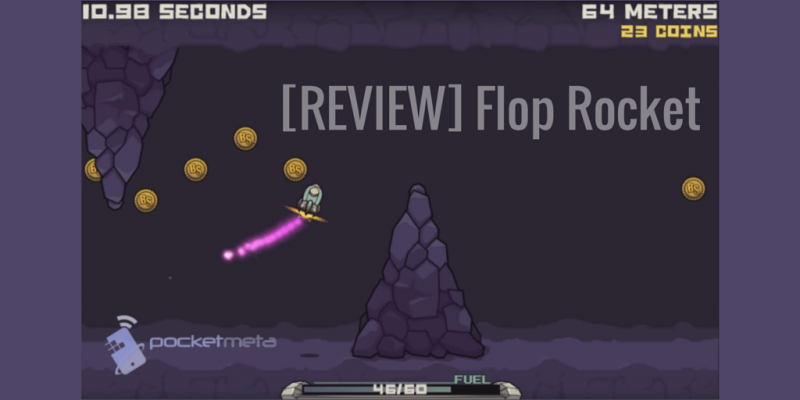 The endless runner genre is a broad one, because other than the platform and linear progression, such a game can be about getting to hard to reach places using impossible finger skills, actually running from someone (or something), using more or less controls (sometimes just one), the lack or presence of the actual ‘end’ and so on. The trait I intentionally left out is avoidance, because that’s what Flop Rocket is about. Well, not just that, collecting stuff along the way is included, but expect to smash into walls and die. A lot.

I never understood the satisfaction you’d get from a game that never ends with the sole purpose to find out just how far you can go. That being said, Flop Rocket is an endless runner at its core and I say that because in reality, it’s not endless – you do have a goal – , and it’s not a runner either – because you won’t be using your pedestrian skills, you’ll be flying a rocket instead.

What you’ll have to do, is fly your ship through a 5-kilometer cave and reach the outer space, because you’re a pilot trying to keep an underfunded space program alive. The problem is (there HAS to be a problem!), that narrow cave is full of hostile worms and spaceducks, which don’t look like ducks at all, but more like undead or terminally ill dragons if you ask me.

Regardless how skilled you are at piloting your ship, the machine itself is a bit outdated, to say the least. So if you want to get to the end of the cave you will absolutely need to pimp your ride using the coins you collect along the way. Power-ups and fuel pads sprinkled throughout the cave will also help you get further as long as you manage not to smash your rocket into the cave’s walls and stalagmites. 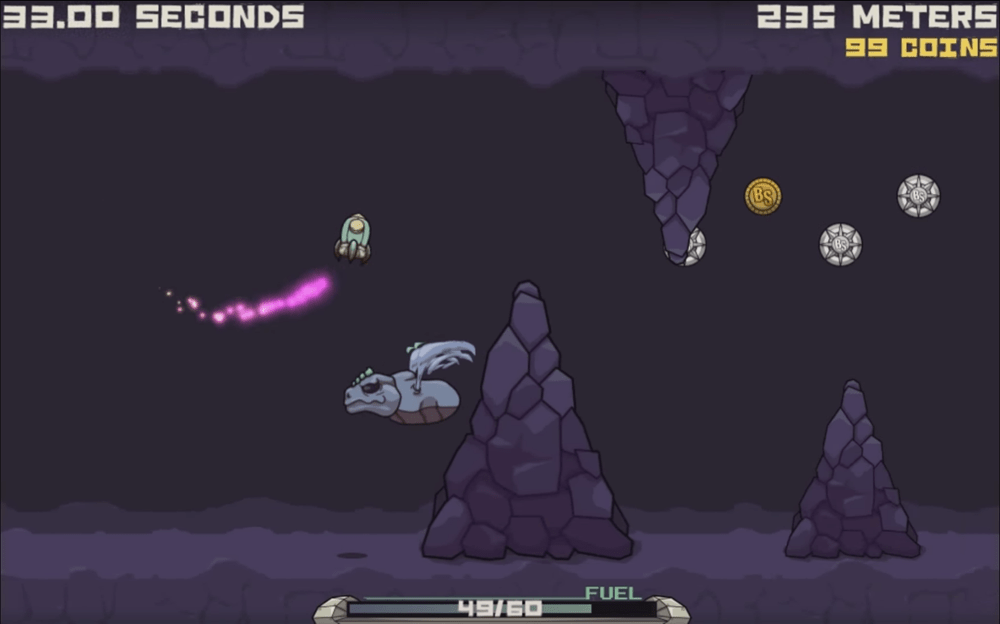 You’ll start off a launch pad and be prepared to repeatedly explode your ship as you’re trying to perfect your piloting skills. In the beginning, the rocket is as basic as can be, so unless you’re incredibly good at steering it between foes and the cave walls, you’re going to need upgrades. You’ll have to make a few runs with the default equipment to grind some coins for the first upgrades – which is a welcome challenge in my opinion.

There’s also the fuel issue – there are fuel pads on the way (landing on them can be tricky), but they become scarcer as you progress further into the cave. Luckily this is upgradeable via collected coins, along with your ship’s thrust, agility and magnetism. Power-ups can be collected as you go, or you can buy them before each take-off. 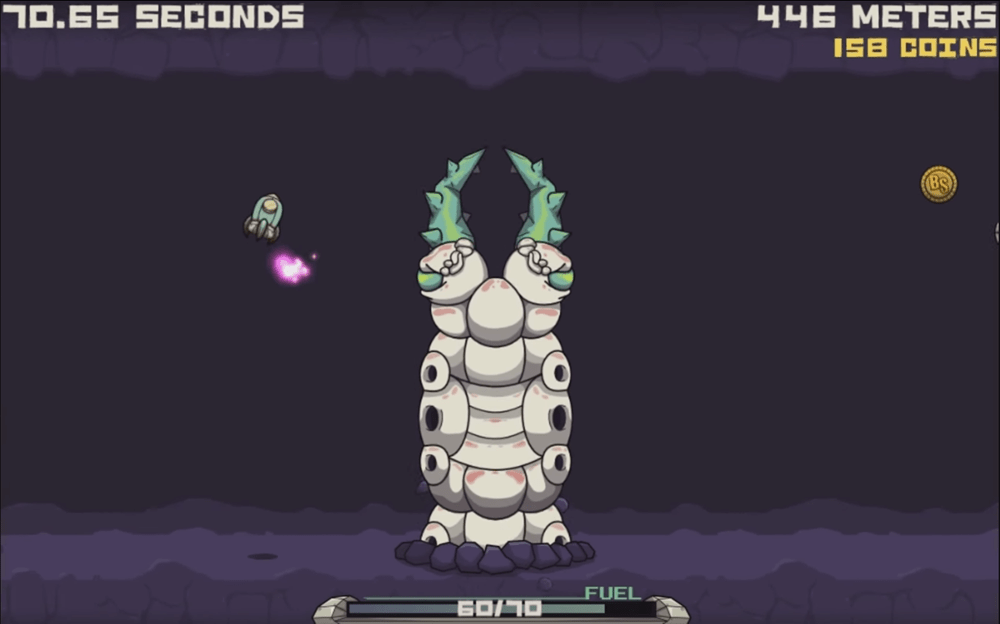 I really enjoyed the unique control system of Flop Rocket. You’ll be using the wheel on the left side of your screen to turn the ship and the right side to control the throttle. I wouldn’t say it’s easy to steer the rocket, but the controls are adaptive and make it humanly possible to go impressively fast or slow.

This makes the mechanics both pleasant and challenging so you actually get to enjoy the game even if you die often, which I think is incredibly important for this type of game. Flop Rocket is not the kind of game in which you die because your fingers are more skilled than the controls can handle, it’s more like the other way around. 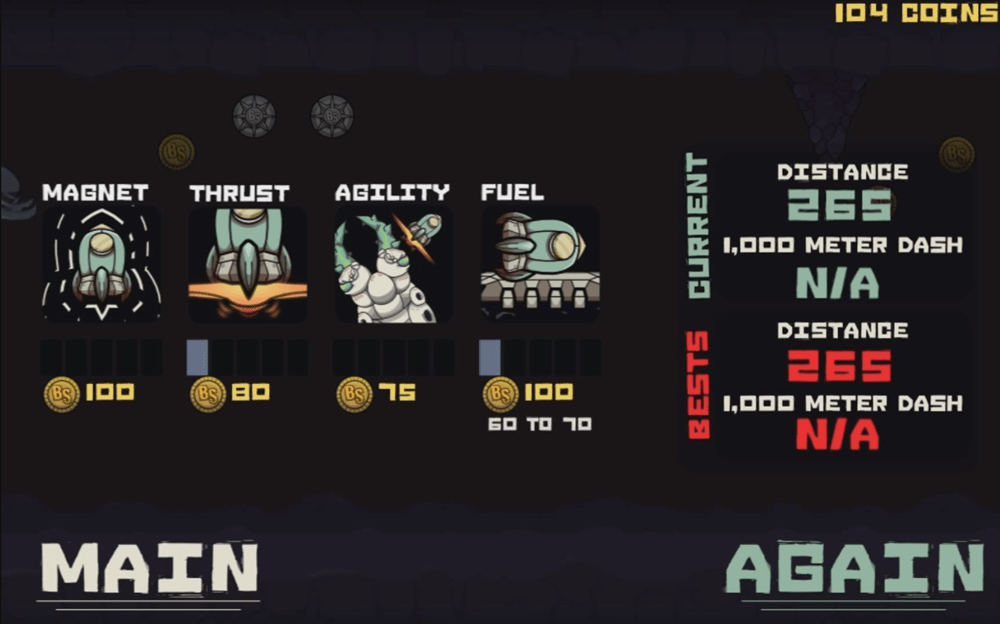 By now, I think you might already have an idea of the game’s difficulty but I’ll try to be more specific regarding this aspect. Upgrades and power-ups will help you get over some mistakes but they are not enough to get you to the cave’s exit.

The path becomes more difficult the further you get, you will encounter less and less fuel pads contrary to the number of various sized Spaceducks and worms. Just when you thought you’re mastering that rocket like a pro, a new and unique combination of obstacles will pop up out of nowhere just to prove you wrong.

Despite all that, Flop Rocket can be finished – the goal is not just a carrot on a stick, which is nice, because that keeps players motivated, besides high scores and the shiny bling you get to add to your ship. 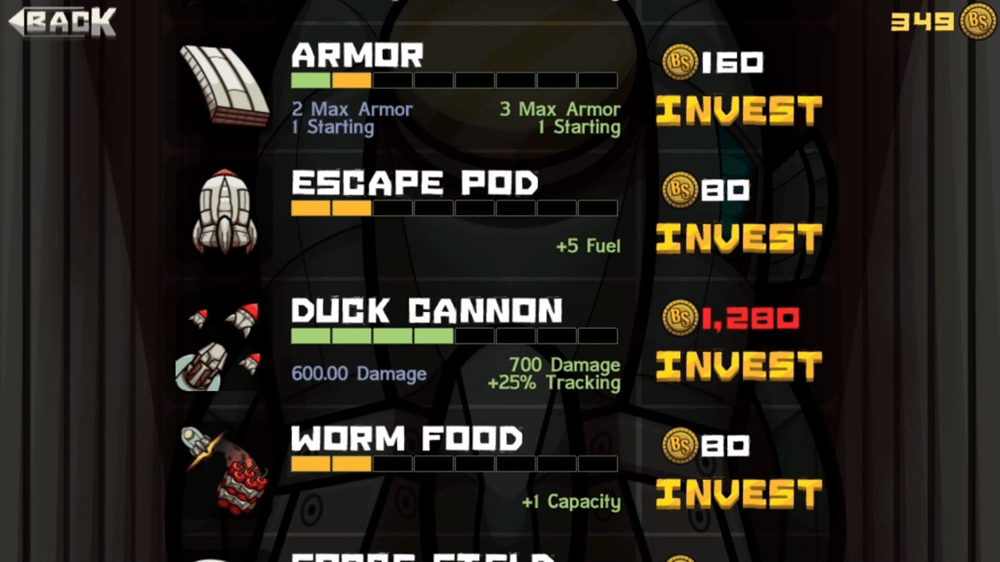 Flop Rocket is a free-to-play game that includes ads but it does have an optional Butter Up pack for $ 2.99. This requires a BscotchID that you can register in-game and it’s the only paid upgrade in the game.

The ID alone offers several benefits such as saving your progress across devices, friends leaderboards and perks in other Butterscotch Shenanigans games. Furthermore, the upgrade removes the ads and unlocks 8 more upgrade paths (gun and armor included) and twice as fast upgrades and coin earnings.

You’ll gather coins by collecting them and with Butter Up you will unlock a premium currency called Juice, which you can earn when completing mission objectives or buy for 150 coins per piece. With it you’ll be able to boost your rocket’s armor, get an escape pod and also dynamite that can be used to kill worms. You can acquire Juice in the free game, but you won’t be able to spend it unless you buy the upgrade. 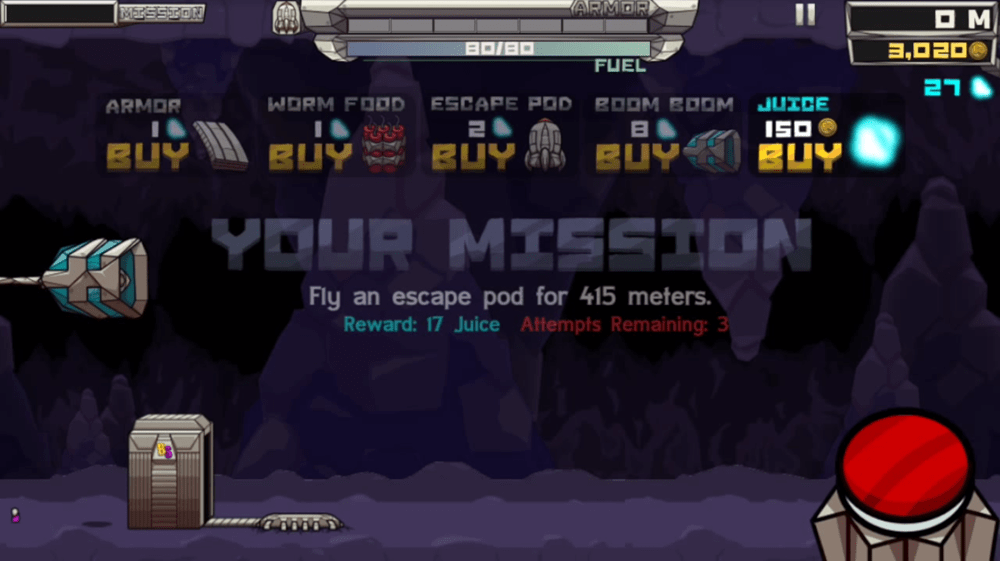 For each run, the game is going to give you a random mission, just to keep things interesting even if you’re going through that same cave over and over again. To add to the fun, you’ll have plenty to worry about, from mastering the controls to improving your ship and earning enough coins for that.

Another thing I liked is that if you reach the outer space, you unlock an endless mode. For someone that managed to actually reach the cave’s exit, I think the endless mode can offer a solid challenge – something like “Now that you’re so good at it, let’s see how long you can keep it up”.

At some point you’re definitely going to get bored with it, but the truth is, Flop Rocket offers the type of content that can keep you busy for a good while and not make you so frustrated you want to quit in the early stages.

Flop Rocket has very detailed graphics, and I think Butterscotch Shenanigans did a really good job with the cartoon art they used.  Sometimes cartoonish games can have an overcrowded interface, but it’s not the case here. Also, the music suits the game’s style very well and adds a bit more depth to the dynamics, as it should.

Flop Rocket is a well made arcade game with a unique combination of obstacles, rewards, upgrades, power-ups, the cartoon look and feel , a goal that’s actually achievable and just the right amount of frustration that makes you develop a love/hate relationship with the game.

Something I would definitely like to see added is a larger variety of enemies, perhaps with an unexpected surprise here and there. This would force the player to pay more attention to the surroundings. I realize this could exponentially increase the difficulty and as a result the frustration that accumulates from failing repeatedly. Perhaps these new additions could be included in a special mode, for players that already finished the existing one.

As a free game, it’s definitely worth a try and you can have some fun while you decide if you like it before considering the $ 2.99 upgrade even though it is possible to finish the game without it. Nevertheless, with Butter Up, Flop Rocket gets a whole lot better and in some ways easier, but it does manage to preserve the challenge without giving you a ‘free’ win.