Although player’s interest in the tower defense genre is definitely dwindling down as time goes by, it isn’t dead by any means. It would be nice to see something breathe new life into the genre and come up with a really interesting innovation that shakes things up — but perhaps tower defense has run it’s course. Forest Spirit is new TD game that promises to be challenging and non-linear, but does it really do anything to break the mold of the genre?

The objective of the game is to defend your grand tree, and you do this by planting vine whippers, pea shooters, and other things to fend off waves of insects that want to eat up your tree. Visually, it isn’t the best looking game, but I did think the insects and plants themselves actually looked pretty good. As for the interface design, that’s another story — things like the main menu and informational panels in the game could have benefited from a little more detail.

Still, I can’t complain too much, as everything runs smoothly and there weren’t any apparent visuals glitches (although there were a few bugs, get it?). It would have been nice to have seen a bit more variety, maybe slightly different models for the various types of insects, or perhaps different environments that remained forest-y but gave you the sense you were in a new area.

One of the reasons I wanted to check this game out was that it claimed to allow players to set up their defense wherever they wanted. This is somewhat true, although there are still specific markers to where you can plant — they’re not just simply placed around a path. Instead, you have the ability to plant pretty much anywhere in a designated general area. As for your defenses, you’ve got your typical melee, ranged, and resource builders, as well as obstacles you can place and active abilities that can be used in a pinch. 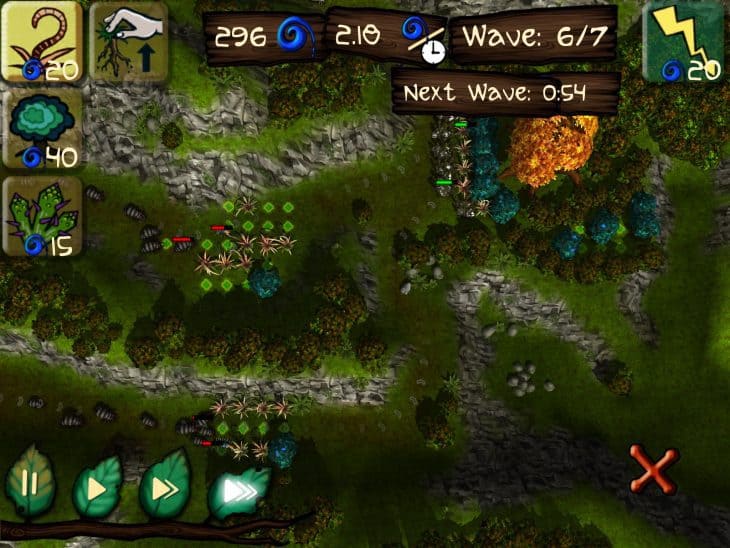 Typically, there will be waves of insects coming from various different directions indicated by a feint arrow line, and this line will increase color intensity to indicate how big of a wave is coming through. The line curves, which allows players to plant obstacle plants like cactus and trees right in the middle of the wave line, plant attacking plants on the sides, and ranged plants away from danger.

It isn’t an entirely unique format for a tower defense game, but also isn’t the same standard format we usually see. There did seem to be quite an unusual balance between the difficulty of each individual level, but the different difficulties help keep it challenging for all skill levels. Overall, I really did enjoy the gameplay in Forest Spirit, and would say it is most definitely the highlight of the game — and that’s usually the most important area to excel in for any game.

Despite above average Gameplay, the campaign was pretty short for my liking. Unless you’re playing at normal speed the entire time, you’ll likely be able to breeze through the game in its entirety in just a couple of hours. There are a few survival levels where you can test your skills in an endless environment, but these get a little stale after a while. Still, bonus game modes are always a nice touch.

I really liked the upgrade system which allowed you give a slight improvement to a wide variety of categories after completing a level. Each plant had more than one different upgrade area, which gave a lot more importance to the decision of where to spend that one upgrade point.

As for whether or not the game is worth the money, it will pretty much come down to how tolerant you are of tower defense games. If this is a genre you enjoy, and you aren’t burnt out on it, I’d say it is definitely worth the reasonable price-tag of $2.99 — even with a shorter campaign (again, Survival mode helps add to the longevity). However, it’s not really anything too extraordinary to where players who typically stick to other genres will come out of the woodwork to check it out. 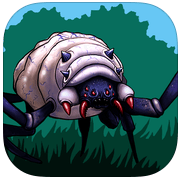 Forest Spirit attempts to take an angle that isn’t all that unique or outside the box, but has a few elements that keep it from becoming generic. Although the campaign is disappointingly short, there’s a little room for replay beyond that point with increased difficulties and endeavors in survival mode.

The actual in-game mechanics are definitely a highlight, and anyone who enjoys tower defense will likely find Forest Spirit to be entertaining and slightly addicting. Still, there’s an overall lack of polish combined with not quite enough bang for your buck in today’s mobile market, which holds it back from being anything extraordinary.