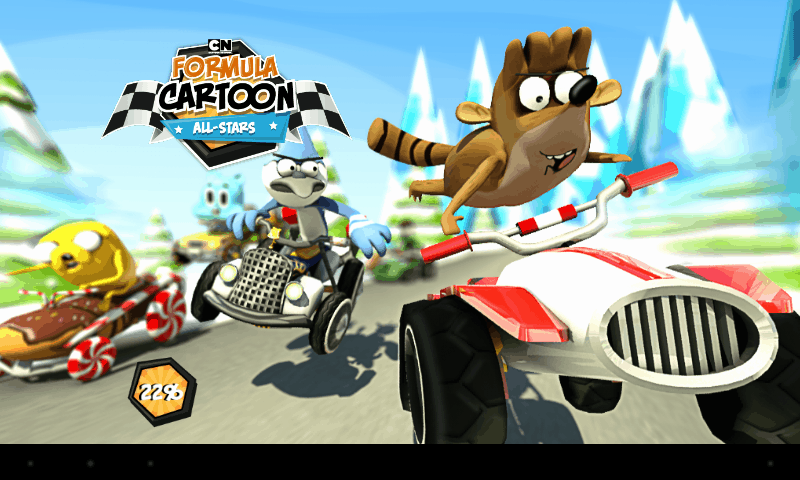 Racing games are so numerous it takes time to weed out the ones that are worthwhile, especially if you are looking for free-to-play titles. FC All-Stars can very well be your next stop in mobile entertainment, irrespective of how old you are and if you care for Cartoon Network characters at all. However, the game’s main audience consists of children, kids and teenagers who watch all that CN stuff – Ben 10, Regular Show, the PowerPuff Girls, Gumball and many others. 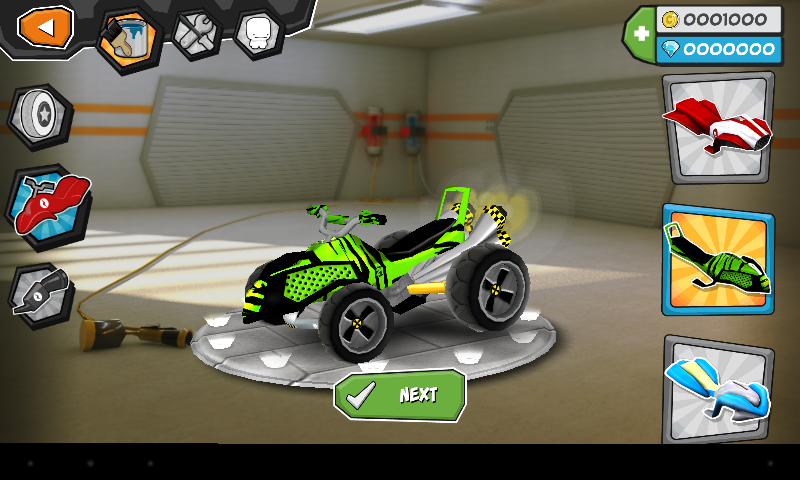 Formula Cartoon is a classic racer with all the pre-requisites of such – colorful carts, workshop where you can upgrade them, tracks to conquer, tournaments and adventure modes, and all your favorite cartoon characters to unlock. But until then, you compete against them.

The game is free-to-play, and you start off as a curly blonde boy, honestly, I don’t know his name, and the developers just assume you are supposed to know them all. Get your free cart by assembling wheels, hull and exhaust tube and start the race. 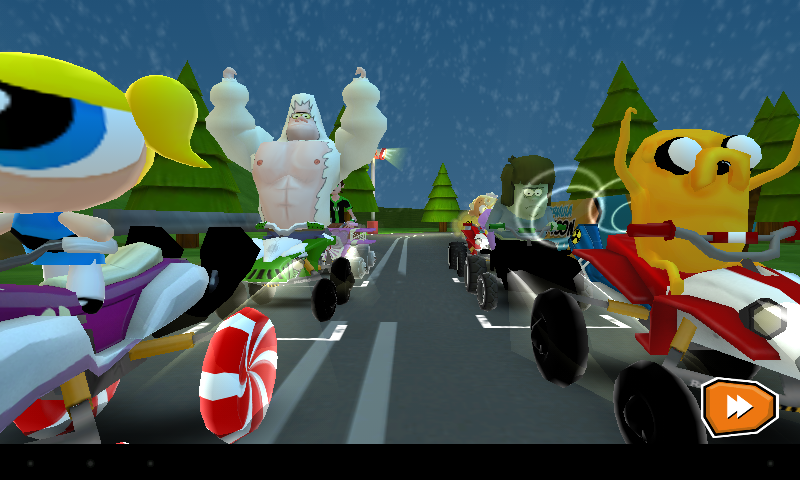 The game features a one-finger control system, but honestly, I cannot explain why developers chose not to give you the option of several camera views and controls. You control your cart by tapping anywhere on the screen – tap to accelerate and watch your cart swish along the colorful tracks. You will see a small steering wheel appear where you tap – that’s how you turn – by turning that small wheel that is invisible underneath your finger. Multiply that by the fact that you view the track from above, and there is no option to switch camera views and see the track from behind the cart, as they usually let you in other racing games, and you get a pretty disorienting experience. At least, in the beginning.

The controls are simplistic, and the carts are responsive, but driving does not come easy. Being an adult, and not a novice in mobile gaming, I found it rather tough to handle the carts. 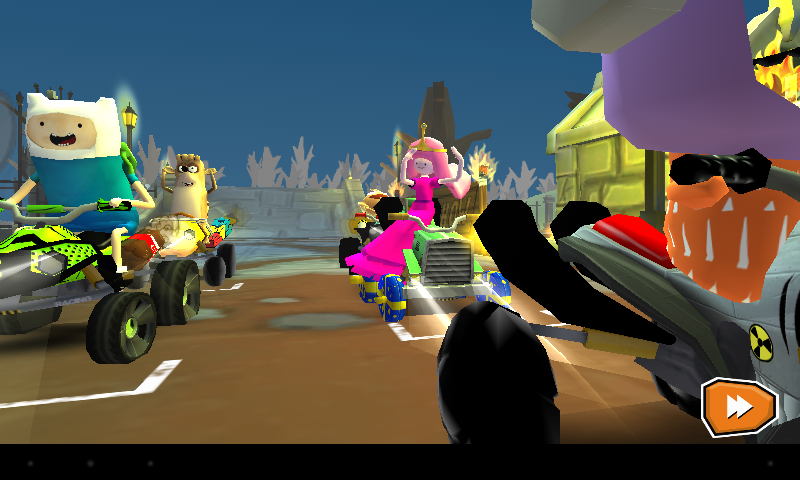 There are two modes – Tournament and Adventure. Most likely, you will start with the Adventure mode where you can spend some time playing for free, and trying to master the mechanics of the game. The first level in the Adventure mode is the training cup, which consists of three tracks where compete against a bunch of CN characters. You need to win 7 stars in order to unlock the next level, the Forest Cup, or pay 10 diamonds to unlock it. There are many levels – Regular Show Cup (25 stars), Night Cup (37 stars), Adventure Time Cup (51 stars), and many-many more.

The tricky part is getting stars, and in my personal experience, I was able to collect enough diamonds to unlock the Forest Cup faster than I managed to master the cart to beat my opponents. So, ultimately, the game is a repetitive grinding process, unless you want to pay.

There are two currencies in the game – coins and diamonds, and you can earn them by racing and winning. However, if you really care to unlock more content, explore other tracks and upgrade your carts, you will have to purchase the coin packs, and here is the breakdown of some of the popular IAPs for you to have an idea of how much it can set you off:

Unfortunately, without resorting to in-app purchases, you are as god as stuck with repetitive grinding for diamonds and coins, while getting stars seems like a task for kids particularly passionate about Cartoon Network, but definitely not so much fun for other gamers.

The game is cute and the 3D cartoonish graphics totally belong here, with the cartoons characters. Before long, you will be able to unlock some of your favorite characters for diamonds, but the only time you actually see your character is the intro before the race. Track design is the game’s major virtue, besides racing. The tracks are diverse, beautiful and really impressive, which makes up for the game’s tiresome grinding part.

The carts can be customized and upgraded, but there is nothing particularly entertaining here, unless you appreciate Coca-Cola bottles for extra propulsion, or a pair of Christmas bells for extra glam. The description promises over 100 pieces you can use to customize and upgrade your vehicles, but you will feel torn between the urge to upgrade the cart, or unlock more levels for your diamonds.

I turned off the music after a few races, and that’s about all the settings there are in the game. You can keep the game sounds on to know when or if the game freezes. Overall, the sound score is overly unimpressive and becomes irritating after a while.

The impressive amount of cartoonish characters, colorful carts and pushing and hitting racing action deliver the necessary doze of entertainment that will keep most of you coming back for more. Occasionally, you will hit a box full of tomatoes that will splash all over your screen, obscuring the track and leaving you driving blind for a while. On other occasions, you will hit a box of presents that let you send trouble your opponents’ way, or accelerate. The power-ups don’t work to let you drive faster here, but instead, you have to send a power-up flying ahead of you to hit a random opponent and slow him down. Sometimes, such freezing cubes and floating balloons will catch you and from there, you are as good as done for the race. 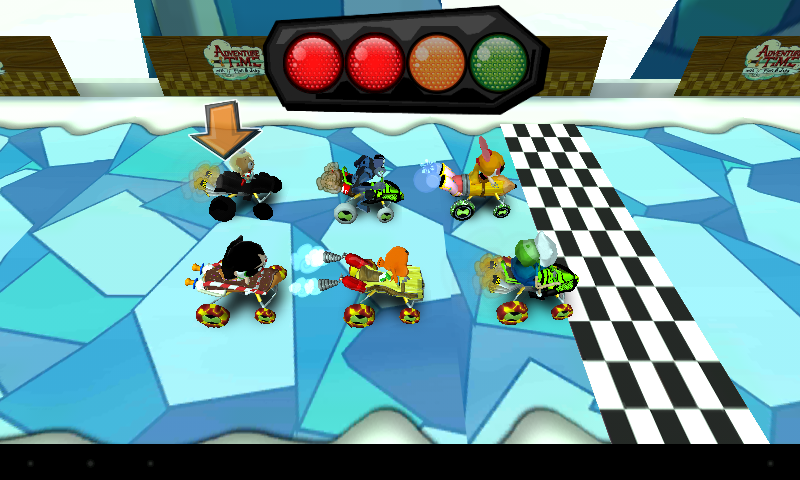 Another good part is there is no limit to the time you want to race, as is the case with the Angry Birds Go. Your characters don’t get tired, and you can send them through the racing maze of tomatoes and intoxicating ice cubes as much as you like. Sooner or later, you will grind enough diamonds and coins to unlock something new.

However, the cart mechanics are tough to master, and I don’t feel particularly encouraged to keep grinding after being stuck in the training pool without winning a single race. You might say I suck at playing, but my aim was to see if I could advance without buying content, and my verdict is – I can’t. 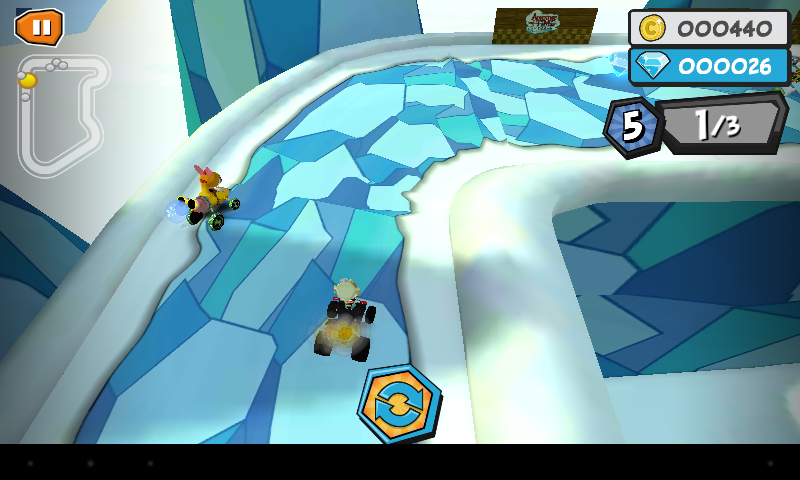 Formula Cartoon All Stars is undoubtedly a fun racer for the fans of the Cartoon Network series like Gumball, Regular Show and Adventure Time. The 3D graphics are awesome, and racing itself is fun, but for the awkward camera angle and one-finger control system, which make driving more difficult than in the regular racing games. I would compare FC All Stars with Angry Birds GO, and by the fun meter, the latter wins simply because there is significantly less grinding for coin and diamonds. Whereas FC is very IAPs-centered, and diligent racing is not rewarded as much as it should be. Overall, it is a fun experience with a few rough edges that could be addressed, but something tells me this won’t happen, so it’s either take it, or leave it.