Imagine if your body was a perfect, harm-proof androgynous avatar you could connect to and experience things your human body can’t let you due to its physical fragility. Your avatar is capable of developing supers-sonic speeds, jumping higher than Sonic and surviving regular free falls into the abysmal vortex of digital nothingness.

Fotonica lets you do just that. 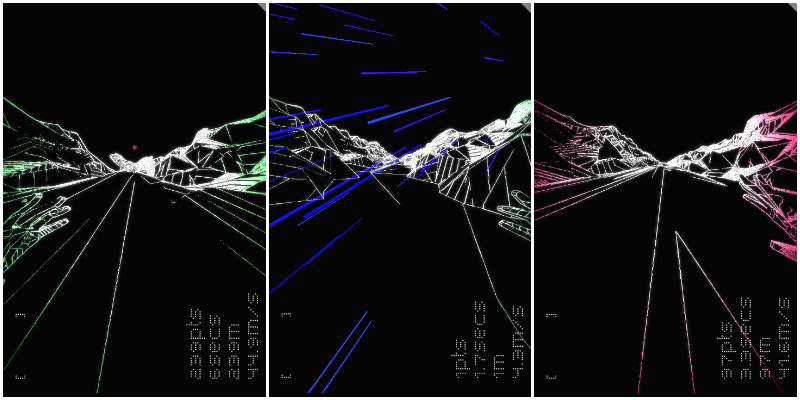 Fotonica is a first-person endless runner, with the end being the limit of your reflexes and good eye-hand coordination. You don’t see your runner, but a pair of two hands regularly appearing on screen as it runs. However, the game lets you feel the heart-pumping exhilaration, euphoric excitement and desperate horror – all within seconds of a single gameplay session.

You run straight ahead on a direct trajectory, no turning left or right. The only challenge is to time your jump and landing.

Controls – tap and hold to run; release to jump. With the seeming simplicity, the controls will have you sweat on more than one occasion when your runner makes a desperate gasp as he misses the landing a split second and falls, infinitely, into the black void. His hands are helplessly trying to cling to something, but there is nothing but the black air miles around him. 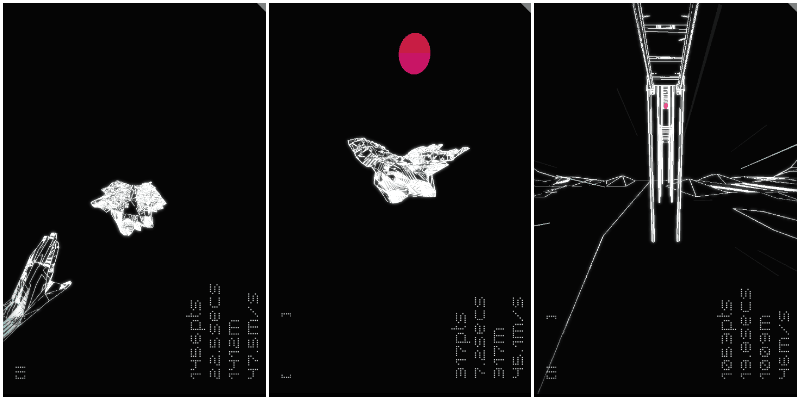 Fotonica features three game modes – arcade, endless and versus, and the names are quite self-descriptive to explain what they mean. Each mode has a variety of levels, and by default only one or two are available. The rest get unlocked as you play and accumulate points for kilometers and speed. The arcade mode features eight levels; the endless three; each with unique layouts, colorr schemes and soundtracks.

The versus mode lets you play with a friend using the same device, where a screen is split in two parts. Of course, it is better on a tablet’s larger screen, since the two players need to tap and hold to run and see a good part of the screen to time jumps.

Each level is unique in the environments design and the soundtrack, but they always follow the same pattern – you run along a platform that gets interrupted by an abyss, and you need to jump just in time to reach the next platform. Sometimes, there would be layers of platforms, so a bad jump will land you on a lower level track, but it is a mistake you can’t afford to make too often because the layers are limited. 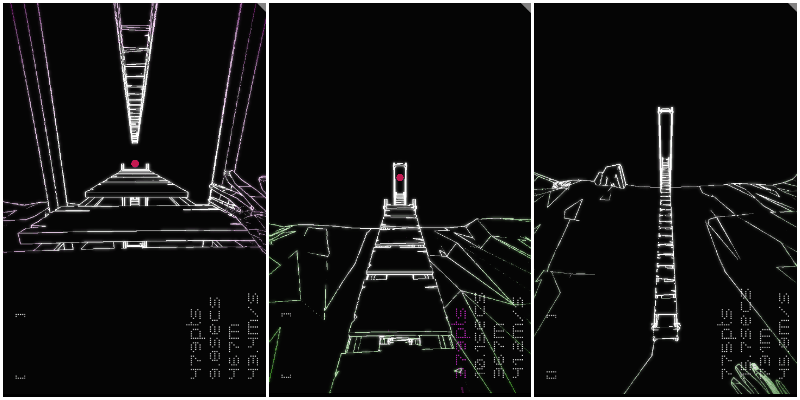 Fotonica is enjoyably hard and features two difficulty settings for all levels – normal and hard. Each subsequent level gets unlocked when you run enough kilometers in the previous levels. That said, each level does not feel like an achievement you unlock due to your efforts in the previous level, but a standalone adventure, unique, new and exciting.

Timely jumps and appropriate landings are the main challenges in Fotonica, but when the game starts playing on your emotional side – the excitement, exhilaration and fear of a failure – it gets even harder.

On the flip side, the levels are not procedurally generated, so you will be able to memorize the layouts and experiment with different running and jumping styles, finding the one that suits you better. Thankfully, the game lets you stop the moment you first land, but be aware you can’t run back and forth. 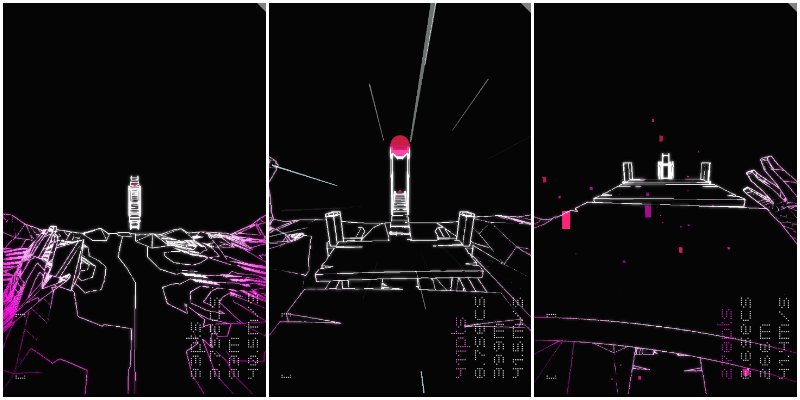 The design is minimalist and ingenious. In a Tron-like vector-style fashion, Fotonica manages to craft entire worlds as you dash past them. It beats me how a constantly black background and a few neon rays manage to create the feeling of a free fall, or a neck-breaking speed. Of course, an excellent selection of ambient soundtracks and the sound effects add a deep layer of atmosphere and drive to the overall gameplay experience. You feel your heart racing faster as you hear your runner make focused and strong gasps for air as he jumps, and your heart sinks as his short desperate “Ahhh!” shoots through the silent and indifferent environment when he falls.

It is fascinating how the game conveys the feeling of a flight and a crushing thud when you hit the platform with your face. 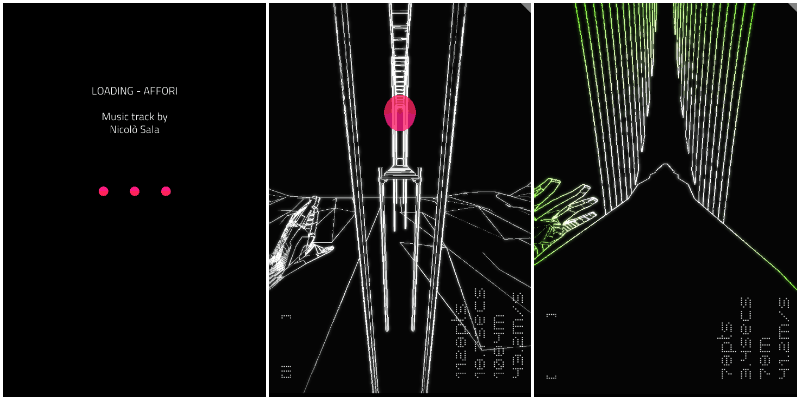 Fotonica offers a superb replay value for those who go solo and for those who like to compete and see their names on the global leaderboards. Opening new world with unique layouts and great ambient soundtracks is a motivation enough, but the truth is the gameplay itself is so addictive Fotonica immediately becomes a resident game for months to come. You can play it offline, and it offers no IAPs, so replaying the same environments to get further in the level and see what’s there, as well as get a higher score, provides for the unlimited gameplay time. Multiply it by the addiction factor because the game’s novelty does not seem to wear off over time, and you get a new classic. 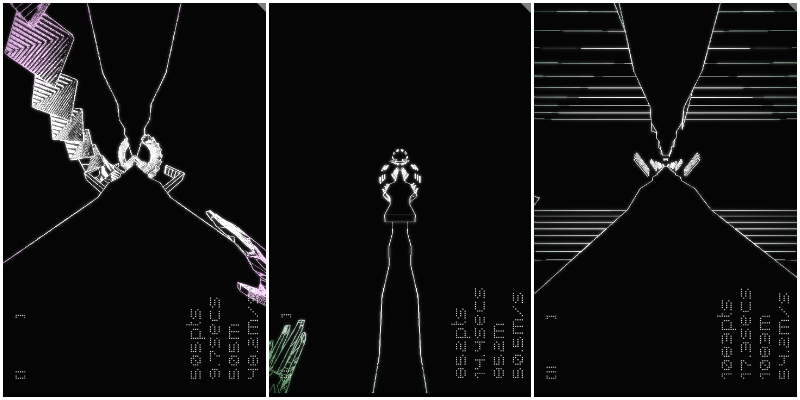 Fotonica is a premium title, and its regular price is $2.99, but Android owners are currently able to get it at a reduced launch price of $0.99, so hurry up. The game features no IAPs, and the more you play the more content becomes available. With its unique environments and superb standalone soundtracks for each environment, as well as a high replay value and a chic minimalist design, the game is totally worth the money. 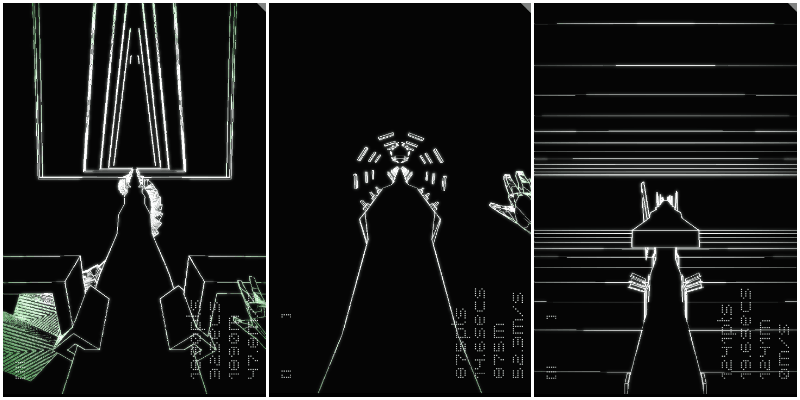 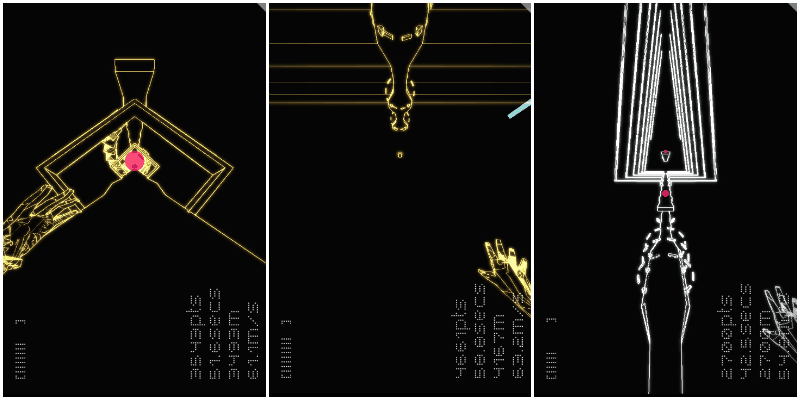 Fotonica is a masterpiece of a game, with a unique, instantly addictive gameplay in an over-saturated genre of endless runners. Its first-person breath-taking perspective in a minimalist Tron-like neon design is wonderfully complemented by great ambient soundtracks, also unique for each level. The game offers a smooth, yet challenging controls system, which lets anyone get the hang of the mechanics pretty fast. At the same time, its difficulty is hard, and even though you can memorize the layouts, the gameplay is ultimately about the reflexes and good hand-eye coordination.

All things considered, Fotonica is a console-quality game made available for your mobile devices, and if you have been considering a premium game purchase, we vouch for Santa Ragione’s Fotonica.