If you are fed up with running around space stations shooting zombies, but still love the first person space exploration experience, we totally recommend Fractal Space. It’s a new, indie game from Haze Games, a two-man indie studio based in London. According to the description, it took the developers three years to make the game, and they’re still working on bringing more content. Free on Android, premium on iOS, soon coming to Steam, Fractal Space is nothing short of brilliant in the world of first person exploration and puzzle games.

No idea. Don’t ask me. I have not finished the game, yet, but something tells me it does not finish by explaining itself. You wake up inside a space station, and a soft female voice encourages you to find a way out. That is, a way out supposedly from the space station. Thing is, you don’t remember who you are or how you got there. There is a planet you can see right from the platforms of the space station. It could very well be that the station is orbiting that planet. Or not.

The station is a darn Cube-like maze filled with lasers and traps. Whoever put you there must be enjoying quite a scene watching you try to get out. All throughout the station, you will find drives containing bits and pieces of the information about how you got there.
Curiously, and the hero notices that, too, you can breathe when you are on the outside platforms of the station. It’s right there in the open space, but you can breathe. With that little information, you begin your journey. Each time you die, you respawn at the beginning of a level. It feels like you’ve been cloned to continue the journey. Your hero is not happy about it one little bit, but the female companion raises your spirits. Sometimes, she would mock you. It’s not clear whether she’s the station’s AI, or some tangible girl waiting for you in the control room, but her persona is intriguing. I bet there is some ASMR (example) triggered in my brain when I listen to that voice, and it adds a ton of immersion effect to the gameplay.

The visuals are top-notch. Without chasing the cinematic realism, Fractal Space looks intensely sci-fi and smooth. The ambient soundtrack perfectly fits in the environment further amplifying the atmosphere of adventure and curious, not desperate, exploration.
Even though the hero does feel like Alice in the Resident Evil, as she gets cloned time and time again. However, the absence of the said zombies makes the experience ever more interesting, even if it’s a little bit lethal. 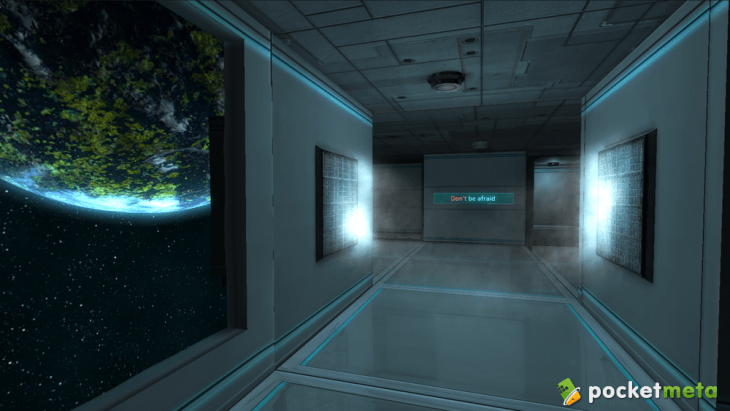 Fractal Space supports gamepads, but the on screen controls are wonderfully smooth and responsive. I have not even needed to adjust the sensitivity. In fact, this is one of the few games that has the defaults set right, as far as I am concerned. 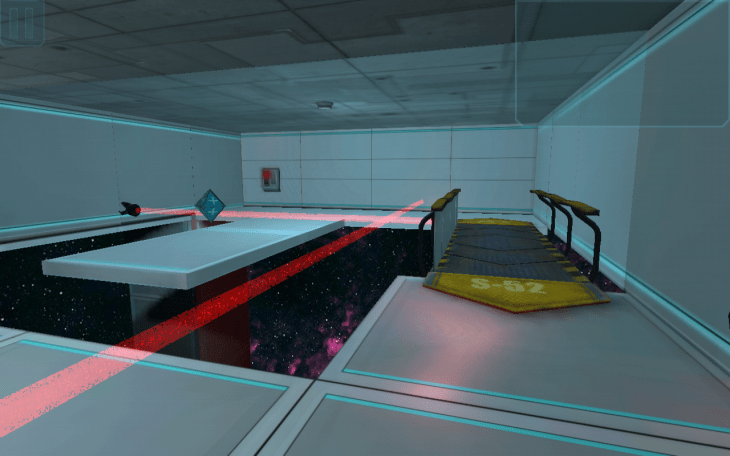 I am not a big fan of platformers that rely on milisecond timely jumps in order to climb the tricky platforms. Fractal Space makes sense and justifies its challenges by realistic physics and predictable outcomes. I have only fell once or twice when I did not look at where I stood, so moving around and controlling the moving stuff around you is not disorienting, which is very important in games you play from a first-person perspective.

Overall, I am very happy with the control system in Fractal Spaces.

It’s difficult, but it never feels impossible or intimidating. Die twice, die a dozen times, but each time you are getting closer to understanding how to solve each stage. You will move boxes, turn on and off switches, jump platforms, avoid lasers, collect gear.

The gear is not that abundant, but highly valuable. Make sure you do not rush to pass a stage because the floating gear might need a perfect jump angle to get to. For example, there was something that looked like a pair of goggles floating in the middle of a vault, but I jumped too soon without aiming at them. So I flew past them. No way to get back from where I was.

Early in the game, you find a taser that activates and deactivates switches you will find all over the station. These will deactivate lasers, open and close gates, bridges, and trigger other actions. The taser needs to be charged every once in a while, and you will find the charges respawning in the fixed places in each stage. 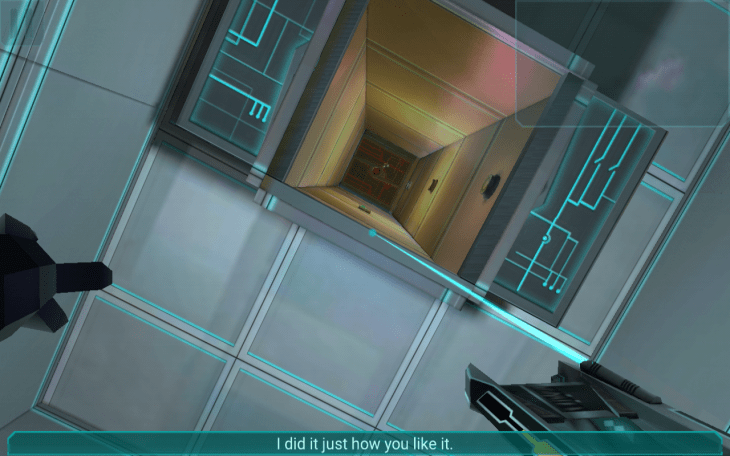 At a later stage, you will find a jetpack that will allow you to jump higher and float in space, covering longer distances between the platforms. Since there are lasers and jigsaws, you might get hurt, so keep an eye open on health packs that, too, are located in specific places in each stage. Some stages will offer mini-puzzles that, for example, see you finding a clue about the lock code in your immediate environment.

The levels are lengthy and complex, so dying and respawning at the beginning of a level is annoying, especially if you recklessly slipped from the edge of a platform. Nevertheless, it never feels like the game is punishing. After all, there is no limit to the lives, or number of respawns that would send you to the beginning of the game. So, never have I felt like there is any skill/gear wall or paywall. 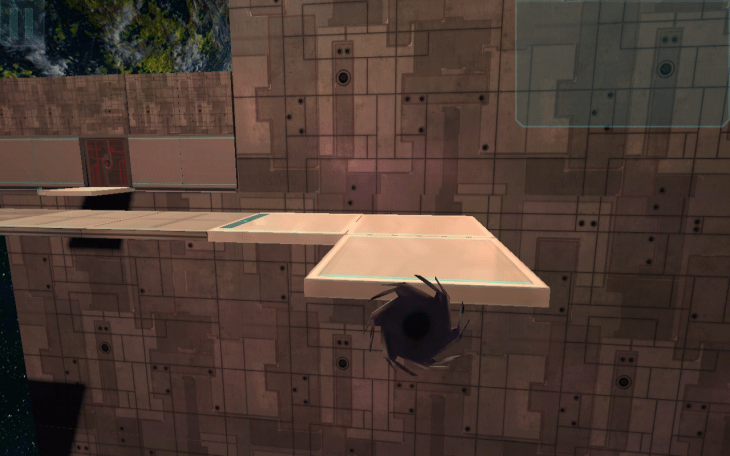 While we’re at it, Fractal Space has no paywall. You play as long as your brain finds new clues and routes to finish a stage. The Android version is free, with optional IAP to support the developer. The iOS version is premium.

Performance is yet another pleasant bonus that comes with the game – I have never experienced any hiccups, glitches or bugs. My Samsung Galaxy tab 3 does tend to get hot during a long gameplay session with Fractal Space, but it did not affect the gameplay flow. 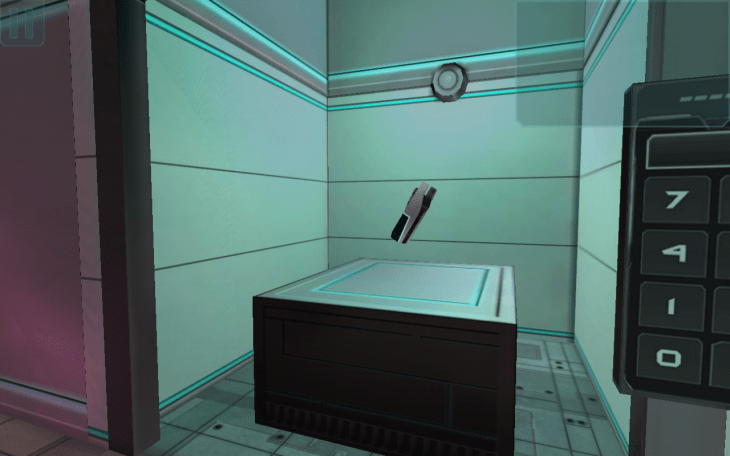 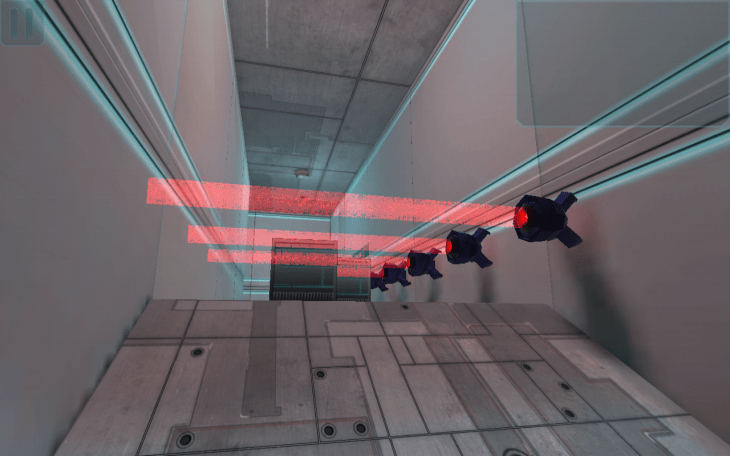 Fractal Space is an amazing first-person space station exploration game with great visuals, wonderful voice-over acting, ambient music, and smart challenge. It’s measured in most positive ways. Instead of throwing tons of unlockable trash gear at the player, its arsenal of gizmo is limited, yet it’s not locked under points, or IAPs, and each piece of gear is valuable. It’s difficult but not punishing, and it offers a decent replayability as you roam the levels. This game stands out from the crowd, and I have no doubts most of you will love the experience. We hope the game gains traction, and the developers will make a sequel, or a part 2 of Fractal Space.

You will love this if you enjoyed all episodes of XON, Portal, Star Balls.