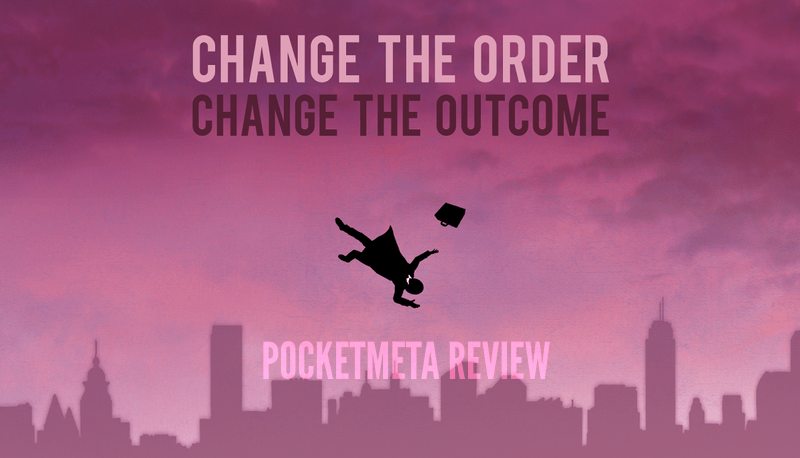 Winner of numerous awards (Indicade, IMGA, PAX, Intel – 25 in total), Framed used to favor the iOS users, leaving the Android crowd sighing in disappointment. Oh, wait you devs, soon Google will consume Apple and we will have you guys delivering to Android first hand. Jokes aside, Android users are happy to greet Framed in their playground, and starting late-August you can buy the game at a discounted launch price of one dollar. So, if you want to buy it, do it now before the regular five buck price tag is back. By the way, the discount price is now valid for both iOS and Android devices.

Even though the game is short, and the Android port is a bit glitchy, perhaps in need of some optimization, Framed is a classy game you’d want to explore. 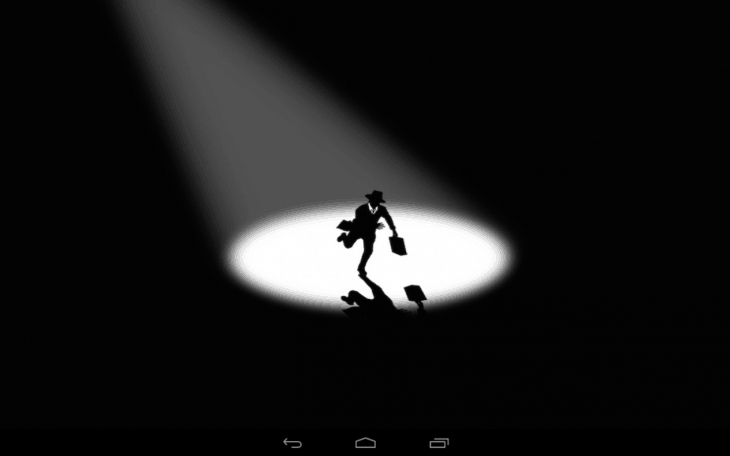 The Frenchmen have nailed it centuries ago – whenever a guy gets framed, cherchez la femme. In other words, with all the MI6 spy games, stealth action and clever tricks, all roads our protagonist can take will eventually lead to a mysterious lady. I knew the trouble was coming the moment I saw her strolling along a dark street, swaying her hips the Bey style. Instead of a whiskey bottle, though, she held a suitcase in her hand – this can’t be good, I though to myself.

Framed is what the modern reviewers like to call “noir” puzzle, adventure, stealth action and animated comic book all in one. A classy noir can be translated into layman terms, and in the case of Framed it’s Mad Men meets Golden Eye and Pulp Fiction, as the jazz band plays a soft tune in the background.

There are three characters you play at various stages of the game, and you can never tell which one is good, or bad. The only obvious fact is all of them need to avoid the cops by sneaking past them, kicking their heads with the said suitcase, or closing the doors in their faces. 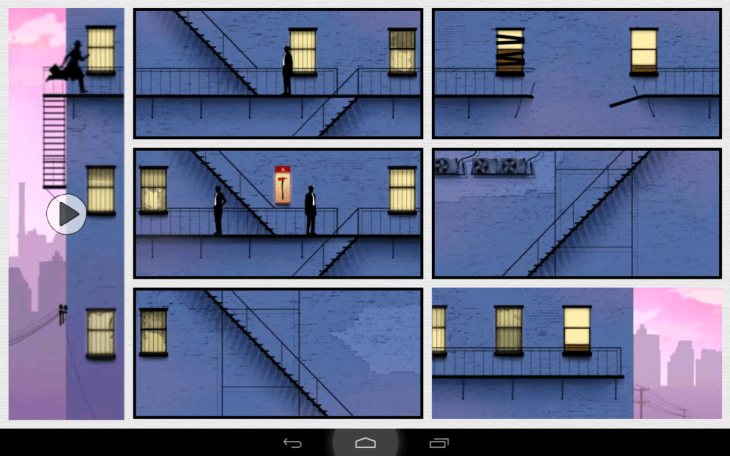 Each stage is a set of comic book blocks on a page layout. Each block has a drawing and when you hit the Play button, you can see the hero move from one piece to the next one. Your objective is to rearrange the pieces so that your James Bond makes it to the final block in one piece, unharmed.

Since the game’s narrative is in the imagery only, you basically guess what is going on. No text, no monologue in the background can give you a clue as to who these people are and where their allegiances belong. The latter are never clear. At one point, it seems the gent and the lady work together and the old man is the villain. At another point, you are not so sure anymore. The end is somewhat perplexing and takes the rearranging of the story to a whole new level – no spoilers from me. 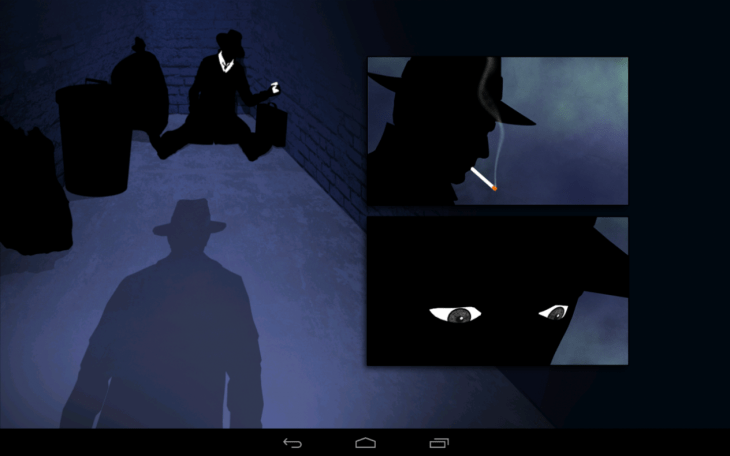 At the same time, this shadiness feels a little unnecessary and way too obscure at times. I would like to know more of a background story, and who does what and why.

In a way, this game reminds me of the Silent Age, but without text. Go figure what’s really going on. And the final scene with the opening suitcase and its shiny contents is totally Pulp Fiction. 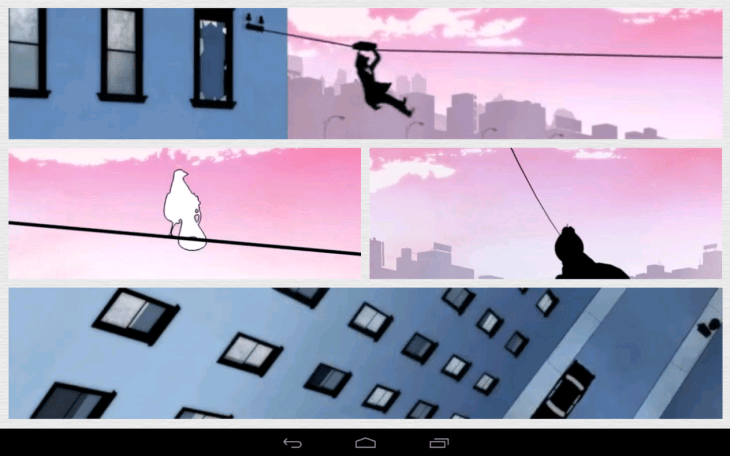 The complexity is two-fold. On the one hand, you have the cops who are never too smart, or too capable and remind me of the three monkeys with the closed eyes, ears and mouth. They never hear you sneaking behind their backs and are only capable of looking in front of them. At the later stages, though, they will discover they can chase you, so stay alert. All you have to do is rearrange the pieces of the page to guide your guy/girl/old man to the exit.

On the other hand, the puzzle part is tricky. Some pages will have you slide through them effortlessly; others, however, may have you scratch your forehead for some 20 minutes. I, for one, get repeatedly stuck on the level with orange and blue corridors, and never seem to memorize how I pass it. 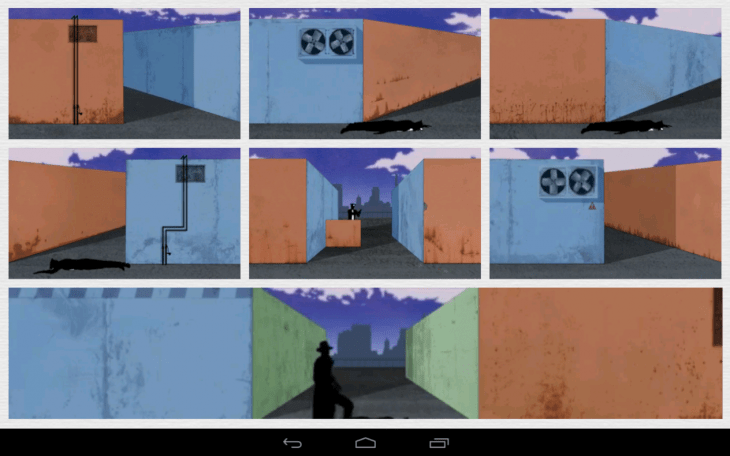 The later stages add new elements, like the pieces you can’t move, but can rotate. Later levels even let you move the pieces while the movie is already playing, and see you frantically rearrange them on the go.

Overall, however, the difficulty is not overwhelming, but enjoyable. Finally, if you get stuck, there is not much you can do but browse online for walkthroughs. Honestly, I don’t know whether it’s a good or a bad thing about Framed that it does not offer tips. I never felt desperate enough to start looking for walkthroughs, but some players may think otherwise. 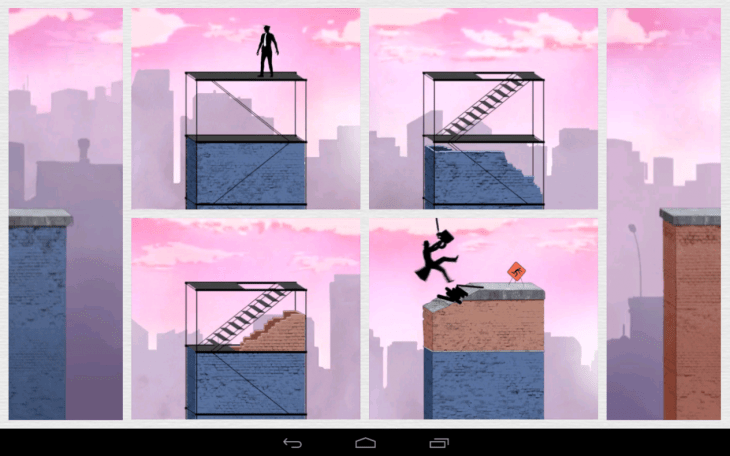 The design is amazing in its polish, and looks elegant and chic in its exquisite pulp fiction simplicity. I never though I’d say elegant about comic book style, but Loveshack Entertainment did it. Everything about Framed’s visual representation is a work of art – the shades, the soft hues and the stark contrasts. The realistically moving silhouettes of the men and women against the colorful background are stylish and a delight to look at. In fact, the game would have looked a lot simpler if the characters were drawn in the comic book style, while the cinematic realism of the movement creates a different picture – that of a movie.

The cinematic effect is further amplified by the jazzy soundtrack that makes Framed even more Mad Men-like. These clever nods to the cult movies and shows like the Bondiana and Mad Men make the fans of the movies want to stick with the game a little longer.

Framed is a one session game. The first time, I played it from the beginning to the end in one go, which seemed like a single heartbeat. Not that it was as short as a heartbeat, but it was this immersive. And yes, it’s a one night walkthrough. What happens from there depends on how much you loved it. You can stick around and replay the game over again. So far, I am not seeing there can be anything that I could have done differently and the story can go another direction. 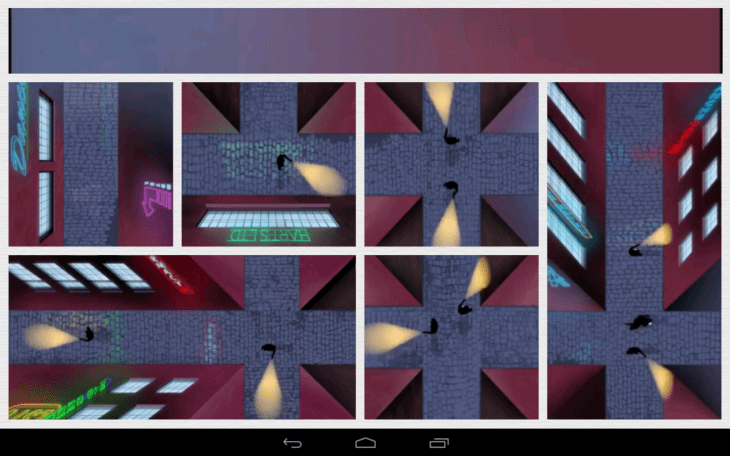 The main allure of Framed replay-wise is the possibility of expansions and new levels because the structure Loveshack has built has an immense potential. In fact, the game itself feels like the first, or the first two, chapters of a larger story. There needs to be a continuation. When or if that comes is up to the developer, but I am hoping that would be soon.

I’d say, the fun, challenge and the aesthetic pleasure you get for $1 is more than you can expect, but I would be hesitant to pay $5 mainly due to the limited replay value. 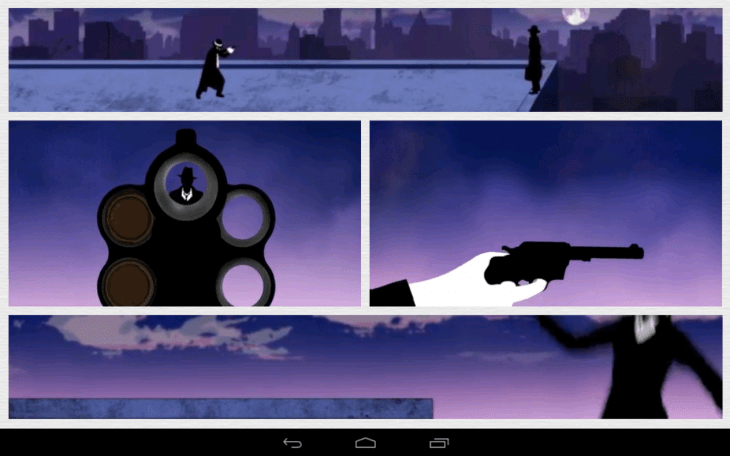 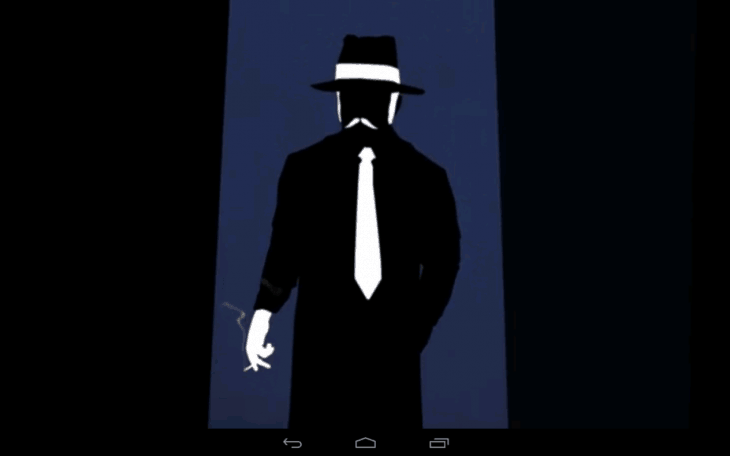 Stylish and posh, Framed is an aesthetic feast and a unique, clever puzzler. It might be vague in its narrative; it might be lacking in the replay-ability; its performance on Android may leave an itching spot. But! It’s a marvel of a cross-genre mixing on mobile, and it is a must-have title this year. After all, what makes a great virtue even more attractive if not a little vice?

What about you? Have you played the game, yet? What is your theory of who the characters are, and what happens throughout the game and at the end? Share your thought in the comments below!