Freeze! is the kind of game that pops up in Recommended or Top Rated games on Google Play and iTunes. It is there on the pantheon for a reason – the game is good. It’s classics of mobile gaming like Angry Birds, but better. Why better? Because Rovio grew and corrupted its games with loads of freemium garbage chasing the big buck while Frozen Gun Games remain indie, which is both good and bad. It’s good because the sequel to Freeze is premium, no ads, no IAPs, play all you want. It’s bad because the game’s been hacked the moment it’s been released, and guess what, it hurts the indie developers who put user experience above revenue.

Freeze 2 Brothers is not just a worthy follow-up of the 2012 release, nor is it a rip-off of itself. It takes the best of the first game and builds up a better game in every possible aspect.

If you haven’t played the first game, try it – it’s free. A cute eyeball is kidnapped and stranded on an alien planet, in a sadist prison. Freeze had you rotate the prison cell on screen to liberate the protagonist from ever more complicated contraptions. The second game adds more drama to the story. A brother.

Apparently, the younger brother named Q-Gun has constructed a spaceship to travel to the planet where his big brother is tormented. He landed, but crashed, and now they both are in the same prison. As scary as it is, having the company of your own kin makes all the difference in the world, and the two brothers are full of determination to make it out this time. 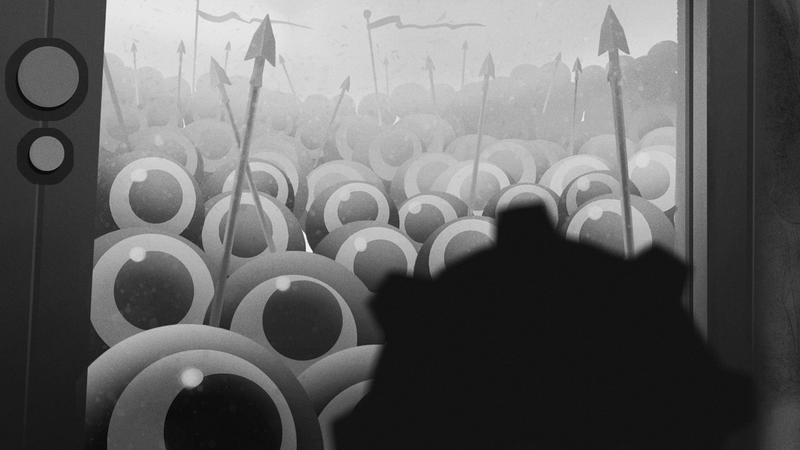 Having two eyeballs instead of one adds a whole new dimension to the gameplay. Now, you have to think how to liberate them both, and they are more interdependent than you would think.

You still have to rotate the prison cell with your finger to make the brothers roll, but this time, the developer added a few twists that will make you scratch your head. First of all, there is water now, and it brings all the real world physics hell to the gameplay. The brothers float, not sink, so you have to maneuver the water and the protagonists. 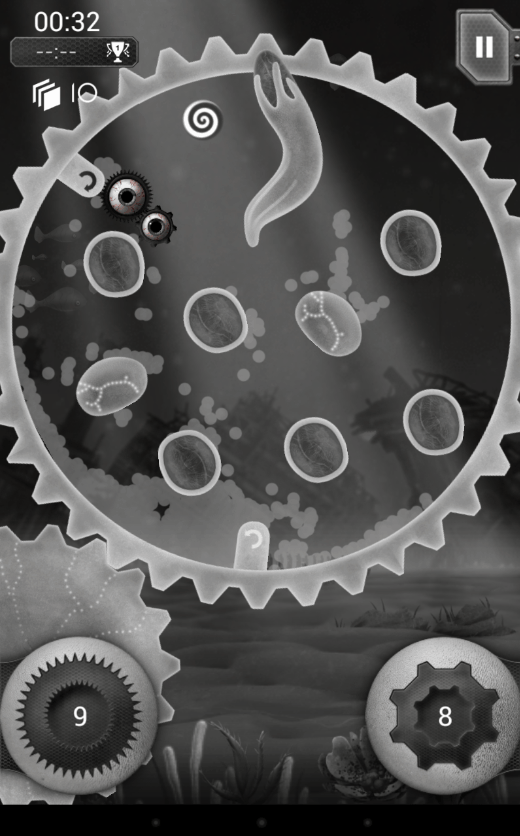 Next, there are spikes, and acid, and axes, and a gazillion of other lethal things. One dies, the other dies, too. Either they escape together, or nobody escapes. That’s how families work, you know.

You still get the freeze button for some levels, and the number on the button shows you how many times you can freeze the character. Since you have two of them, you also have two buttons – one for the big brother, one for the little. It’s heartbreaking to watch their “faces” get covered with blood-filled veins, as if they stop breathing when you freeze them.

Each chapter introduces something new, and before you know it, you will have to not only escape, but collect the missing parts to rebuild Q-Gun’s spaceship and finally leave the nightmarish maze behind. 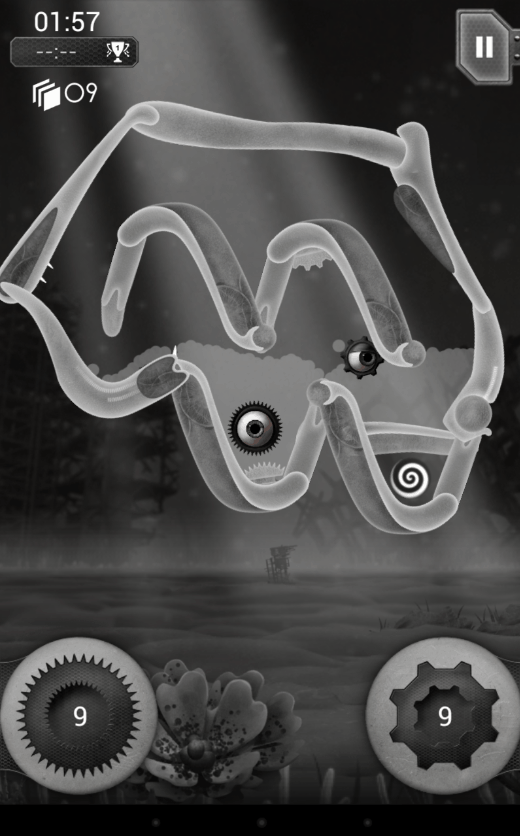 There are four worlds with 25 levels in each, and believe me, Freeze 2 is harder than its predecessor. If my personal best was 2 seconds for one of the initial levels in Freeze, the second game sets the difficulty cap higher. You can skip a particularly hard level, but you will surely want to get back to it later for the sake of beating it. However, clearing all the four worlds is not the gist of the game. It’s playing and replaying it. The nature of the puzzles suggests that there can be potentially several, if not more, solutions to each, and the fact that you play to beat your own high score in time makes you look for better trajectories, better timing, more efficient maneuvering.

Moreover, there are no life meters or limit to the number of retries you can have. Once you fail, the level restarts automatically – no needless spare tapping required. Overall, the replayability here is excellent, and provided the game does not require the Internet connection to play, Freeze 2 Brothers is perfect for short gameplay sessions on the go and the long sessions when you have time, especially at night when it gets dark and spooky all around. 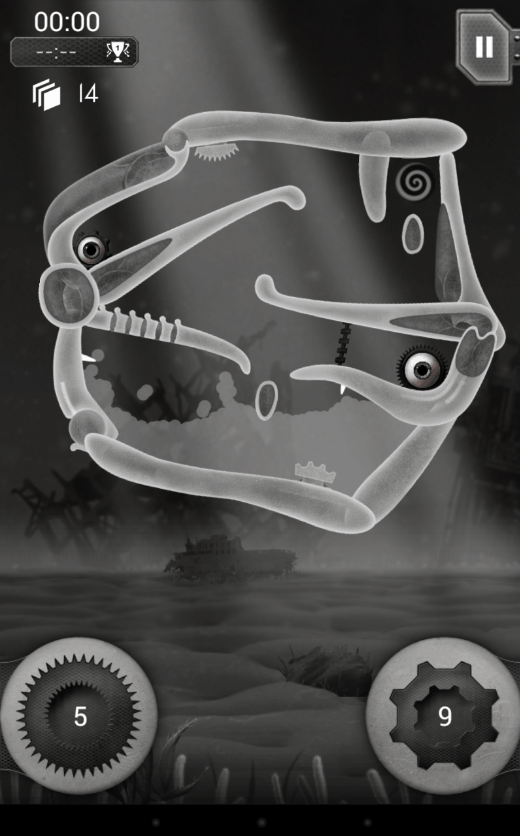 The first few levels are meant to introduce those players who haven’t played the first game to the mechanics, but by level 11 some may begin to wonder where those help videos are. No more. The developers have chosen to make do without them this time, and the game really gets on your nerves every now and then. If you fail at a level ten times in a row, the game offers you to skip it, but adds 11 minutes to your score. You can then get back to it with a refreshed mind, and see if you can beat it on your own. There don’t seem to be any walkthrough videos on YouTube for this game, yet. At first, it may make you impatient. However, if you think of it in terms of the challenge and the rewarding feeling you get when you finally solve a befuddling puzzle, you begin to appreciate the educational and mind-boosting value of this approach.

Finding an elegant solution to the devious physics-based puzzles is a surprisingly enjoyable and rewarding process when you have the patience and the self-poise. When you don’t, Freeze 2 will have you weep, or swear, or both. 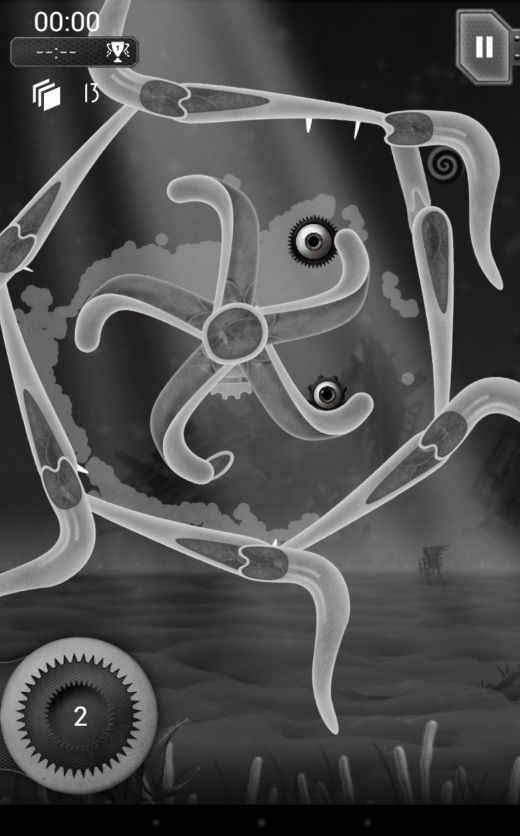 One of the gimmicks that was so attractive about Freeze was its gloomy artwork – both visual and audio. Freeze 2 follows the same route, but does a complete makeover making it a 3D, with realistic particles, flowing and other gravity dependent mechanics. It’s surprisingly attractive with its dark and hopeless atmosphere, and Freeze 2 is the best example of how many shades there are in gray. The soundtrack is a masterpiece, and I am sad I can’t find it anywhere. The six new tracks by the same author who did the soundtrack for the first Freeze are not only atmospheric, but perfectly trippy for your next dive into the vortex of the subconscious. So, the music adds more drama to the story, more tension, more anxiety. Everything about this game is polished to its perfection, and you can tell a lot of love, work and time has been invested in it. 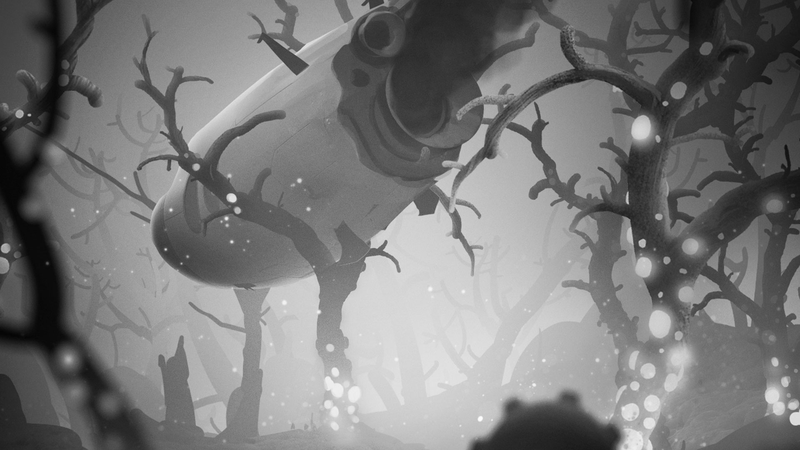 Freeze! 2 Brothers is a premium game that costs $2, no ads, no IAPs. It’s clever, mind-boggling and addicting, with an immense replay value and excellent brain-workout benefits for anyone irrespective of the age. The game is worth more, but $2 is the right price to get it in the trend. I sure hope it gets the traction and becomes as popular as it freemium predecessor. 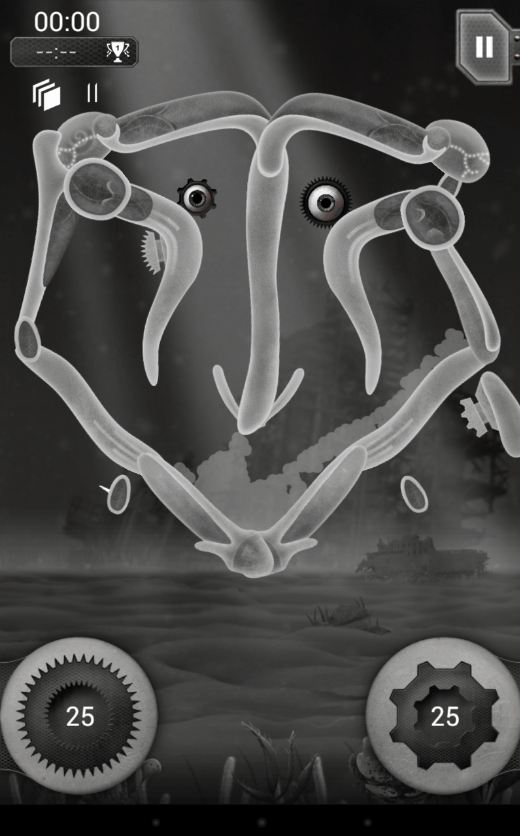 Freeze! 2 Brothers is a devious contraption that will have you weep and scratch your head, but also laugh and feel proud when you solve its mind-wrecking puzzles. It’s clever, yet emotional; it’s beautiful, yet desperately gloomy; it’s atmospheric and unique. It’s perfect for any age group, and the only category of players that does not fit the target audience is the impatient. Everyone else should try it. Freeze 2 provides a whole load of gameplay hours and an immense replay value for the $2, and the intellectual and artistic value of it is worth a lot more. It’s definitely one of the best puzzle games this year.