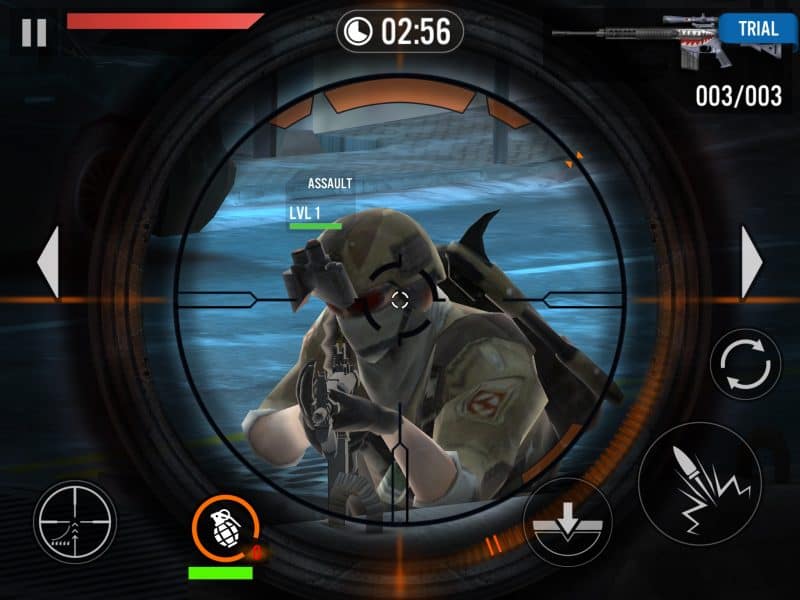 Among the list of games to hit the app stores last week was the sequel to Glu Mobile’s Frontline Commando. The second game in the series stays true to the third person shooter style, but instead of being the lone frontline commando, you’re leading a squad of troops into battle. Frontline Commando 2 features a pretty lengthy campaign, with a few bonus missions along the way, as well as a PvP Mode — there’s also weapon and squad upgrading and customization to top it all off.

In the first Frontline Commando game, graphics weren’t necessarily a highlight, and although there have been some noticeable improvements, it’s not perfect. For the most part, the maps are pretty detailed and well designed, but since there are so few locations, I would have really liked to see some more fine tuned visuals. The interface is really nice, and the character models on the main menu look awesome, along with the weapon you hold in your hands. 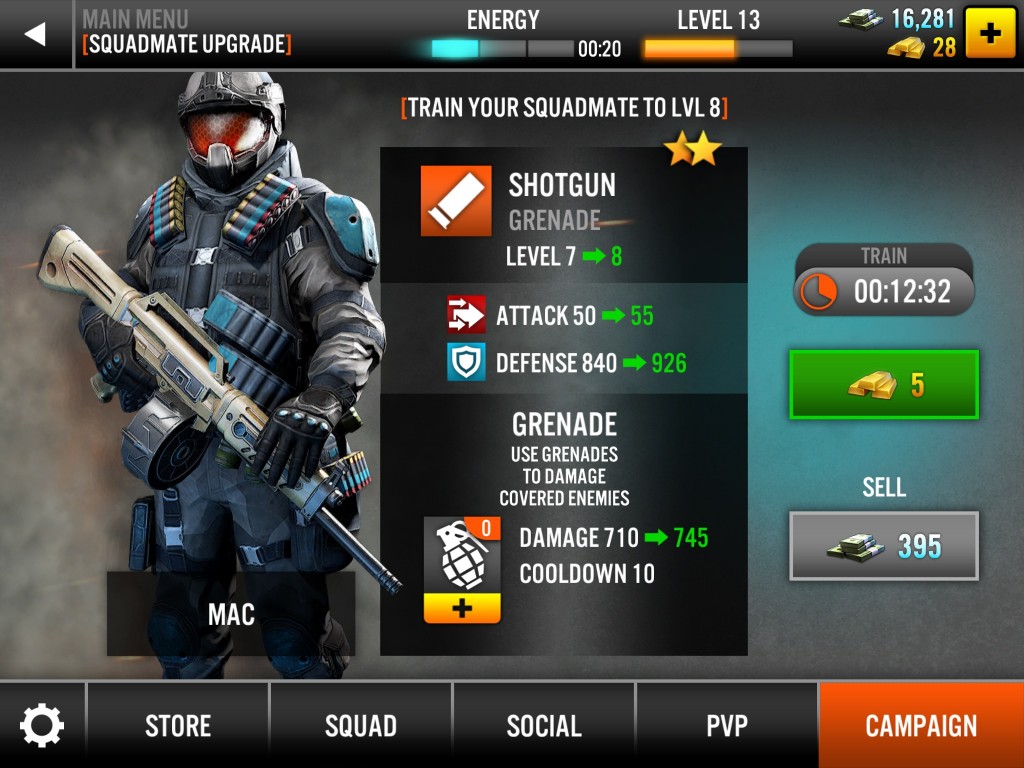 Still, a game can’t get by on it’s menu and interface alone, but fortunately the in-game visuals are still pretty nice. There are some minor graphics that could be smoothed out a bit more, and with that I think this could easily be a game known for it’s pristine graphics. You can tell from the screenshots that this is a good looking game, but you need to actually play through a few missions to really notice anything negative about the visuals.

When a game is labeled as a squad shooter, that generally leads me to believe that there will be a lot of tactical battles and strategy involved. That really isn’t the case with Fronline Commando 2 — as much as it tries to be a tactical squad shooter, it ends up being just a one man show with an unreliable supporting cast. In order to really utilize your squad members, you need to be using grenades, RPGs, med-kits, and drones. Unfortunately, you can’t purchase these things with cash, you have to either unlock them by meeting goals on certain levels, or by using gold. 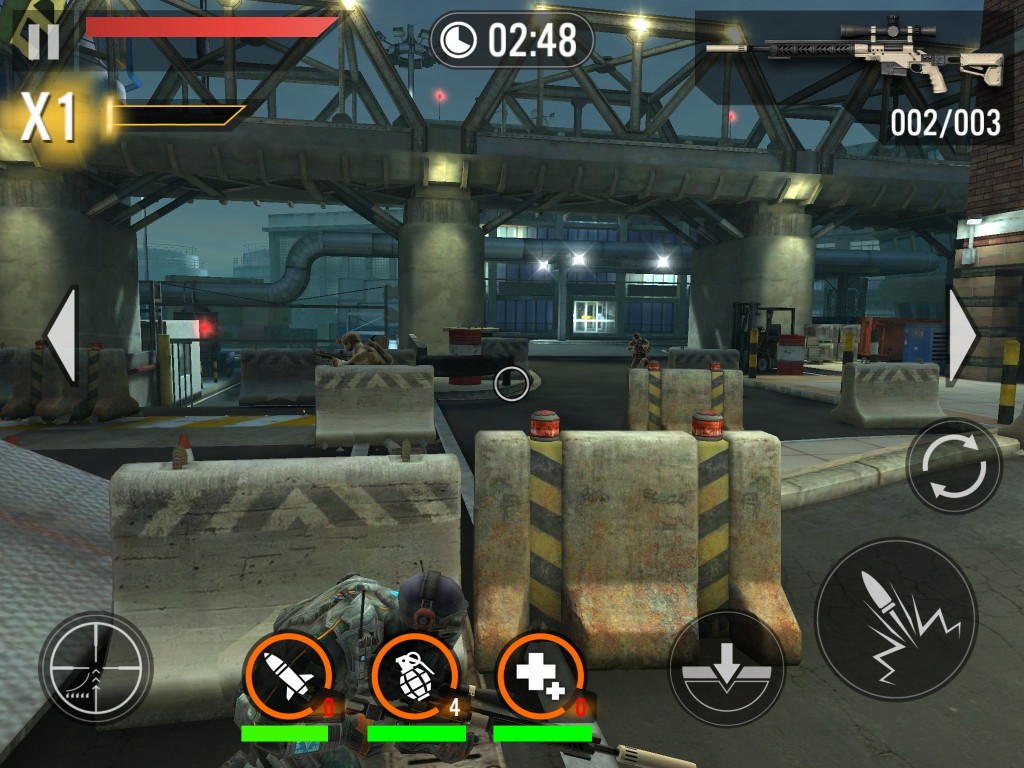 Since gold can also be acquired by leveling up and meeting goals, it helps make it feel not so much pay-to-win, but it doesn’t change the fact that eventually you won’t level up anymore, and you’ll also complete all of your goals. For me, I don’t worry about any active abilities anymore, but I still have to manage my squad — leveling up my members, swapping out roles based on the mission, so it isn’t a completely flawed system.

Throw all of the squad mechanics aside, and you’ve got a pretty decent third person shooter for mobile devices. The shop carries enough weapons to keep things interesting, and being able to upgrade your RPM, Clip Size, Reload Speed, and Crit Rate provides plenty of things to work towards. Overall, combat is decent, but nothing spectacular — some missions are best fought by just zooming in with a sniper and taking out heads, whereas others require an assault rifle or a machine gun in order to be effective. 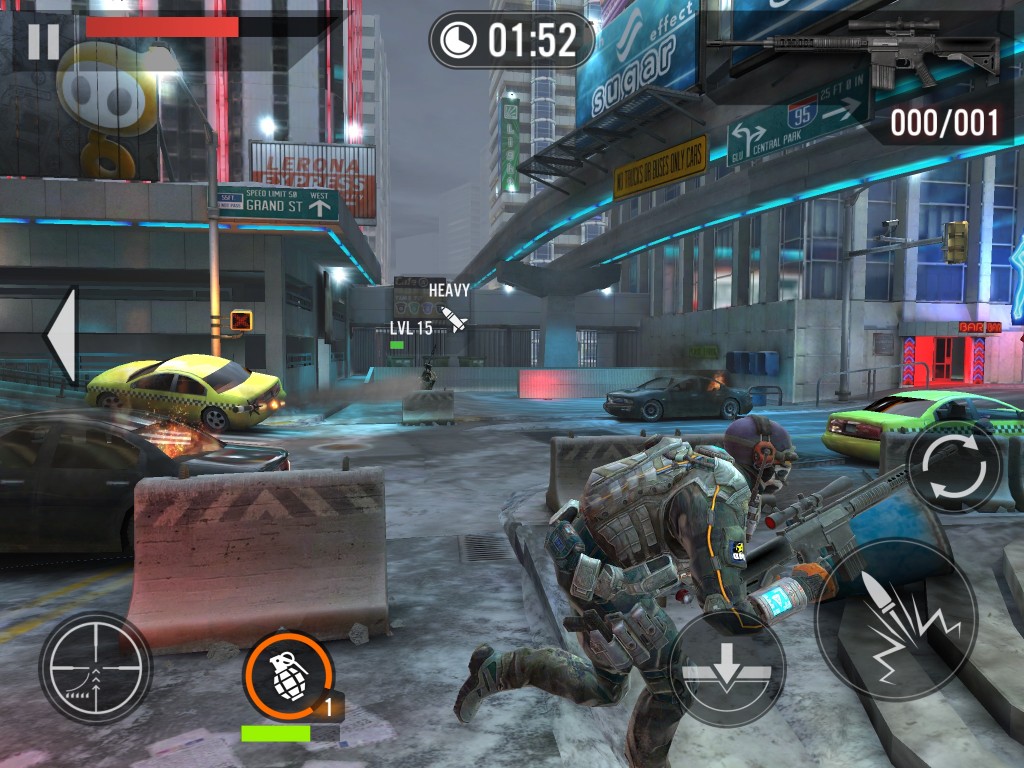 Despite the PvP being a rather minor part of the game, it doesn’t excuse it from being extremely broken. Right now, you can find a PvP match with absolutely no idea of what kind of opponent you’ll be facing — in-fact, I’d say 90% of my matches resulted in me dominating the opponent, or getting killed within 10 seconds. Also, this isn’t really a player vs player mode, but rather a player vs another player who is controlled by AI. Your squads also come into play during PvP, but again, there as useful as they are in campaign.

Even though the game isn’t beautiful, and the game-play could use some fine-tuning, there’s still a lot of content that you’ll want to play through. There are a total of eight episodes, each with five different missions, and some have “Elite” missions which are optional. Along with that, there are three different goals you can try to meet for each mission, completing goals will unlock things such as extra cash, new squad members, or supplies for your squad to use. 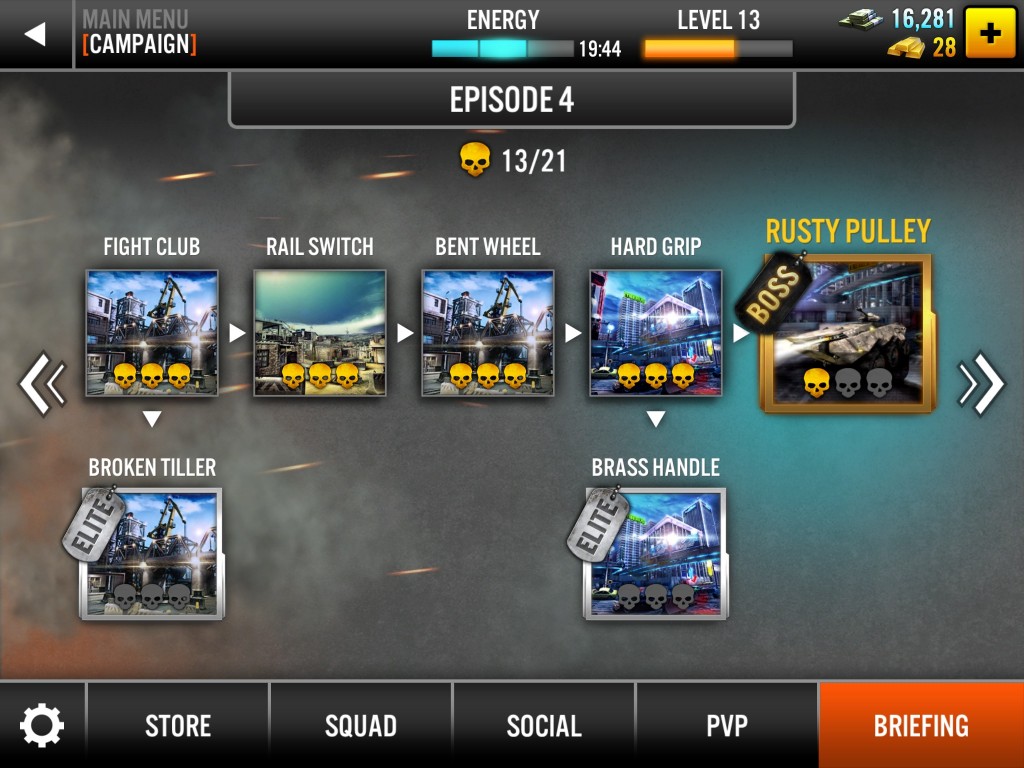 You can play three PvP matches per hour, or one every 20 minutes (unless you buy energy), and I actually like how you’re restricted in this area. Since the PvP is really short, and extremely random at the moment, it’s a nice little incentive to check your device every hour or so to quick play those matches — and maybe do a couple of campaign missions as well. I do manage to hit a road block every few levels, that requires me to go back and play through some old missions, and I’ll usually take this time to try and accomplish some goals in previous missions.

After earning some cash, you can head to the store and upgrade your weapons or purchase new ones. Alternatively, you could upgrade your squad members, which increases their damage, defense, and health. Once you’ve done a few upgrades to a weapon or squad member, you’ll start getting timers for the upgrade, and you have to wait for it to complete before you can do another one. With weapons, you get a timer for each upgrade category, so it doesn’t take too long to fully upgrade any gun.

Even though Frontline Commando 2 isn’t just a kill ’em all third person shooter, it isn’t really a whole lot more than that either. The idea of adding a squad to the mix was nice, but poorly executed, as your squad is primarily just something for you to funnel gold into. However, being able to upgrade your members with cash makes it more worth-while, and the unique rolls are really useful when utilized properly. In-game mechanics could use some more work, other than shooting your enemies, you’re pretty much restricted to just taking out vehicles — I’d like to see some civilians that you need to be aware of, and maybe some structures that could be destroyed for a tactical advantage. 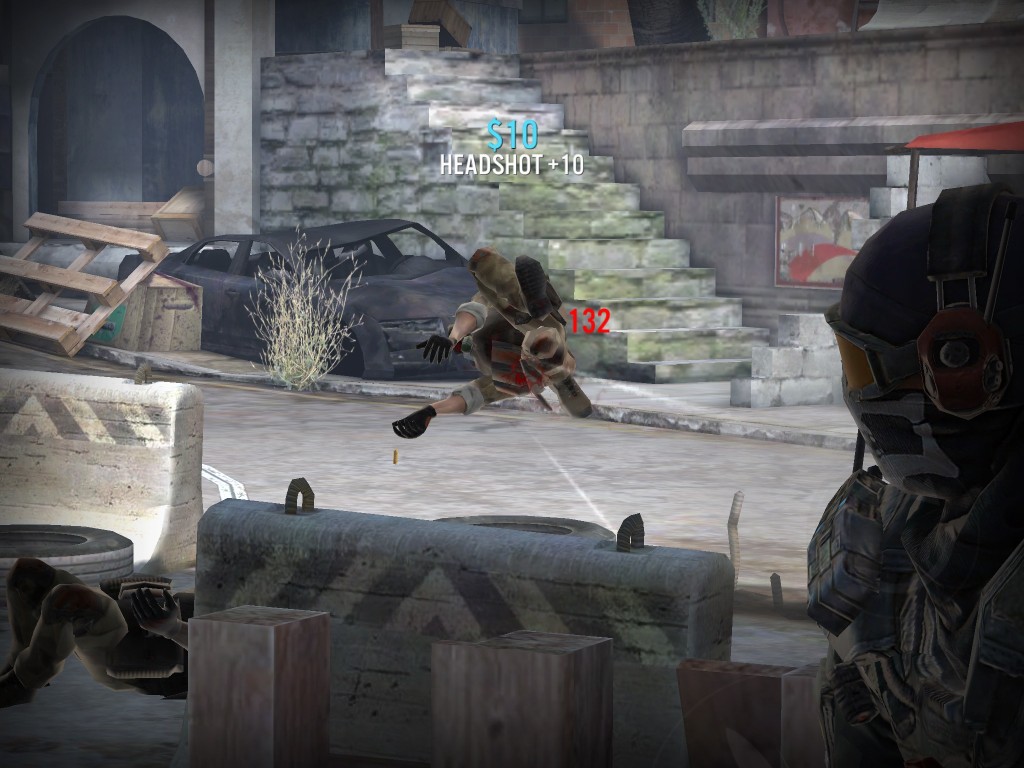 Since there isn’t a whole lot of variance between each map, it makes it pretty tough for anything unique to be implemented, since blowing up a catwalk would just become a habit after a while. Still, it would be cool if there were some extra game-play elements for boss missions only at least, but instead, you’re just taxed with the objective to shoot a vehicle until it blows up.

I enjoyed playing FLC2 a bit more than I probably should have, and devoted several hours to the game over this past weekend. That being said, it wasn’t the best thing I played (check out Smash Hit if you’re looking for an awesome game), but it is worthwhile. In the end, Frontline Commando 2 is a solid third person shooter with some good efforts at innovation — but falls short due to poorly executed features, such as the majority of the squad mechanics, as well as the PvP mode.

What do you think of the sequel to Glu’s Frontline Commando? Is this even any better than the first? Leave a comment below with your thoughts!