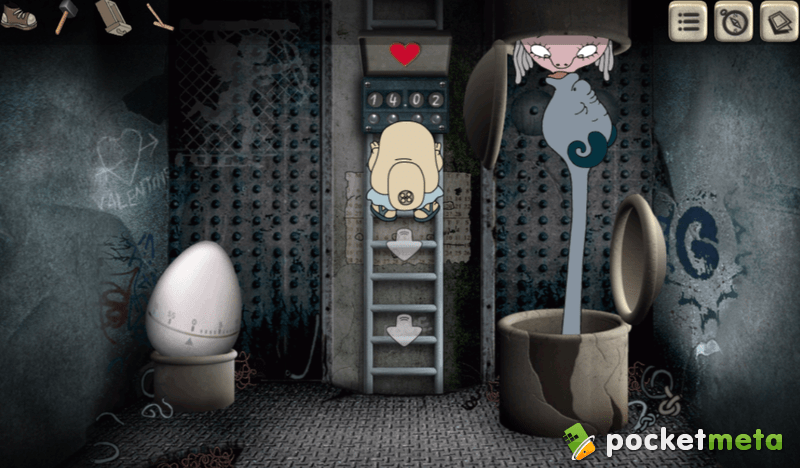 We love indie games here at PocketMeta. We also love the indie games from around the world, and last month only we brought to your attention several wonderful indie games from Korean developers Dim Light and Ikonica, the French Seashine, and Kaiku Racing from Finland. Today, let’s explore some of the Russian indie cuisine. The game in question is called Full Pipe Adventure, and it’s the weirdest and probably the most memorable mobile game I’ve played in a while.

For the more tldr; oriented people, we strongly recommned this game! 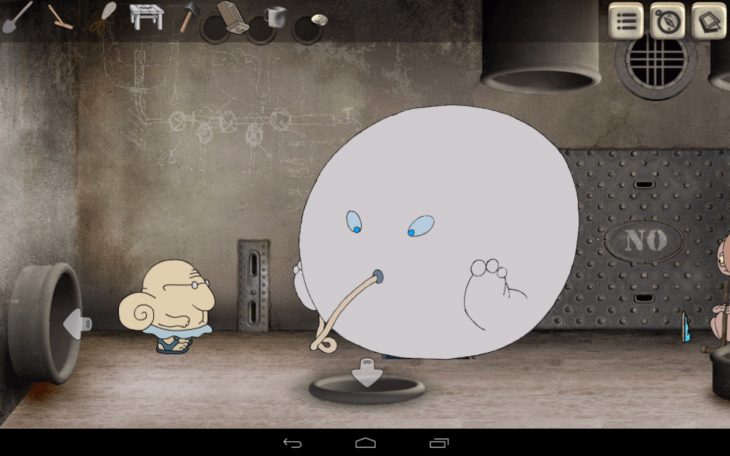 The game is so odd I am struggling to describe it. It’s a point and click tale on the one hand, a surreal adventure à-la Alice in the Wonderland on the other, and a philosophical comic book on the.. wait, we don’t have the third hand. But you get the idea.

The protagonist is a guy called Dude, and what happens in the game is his adventure through the pipes underground. Or, it could quite as well be his dream. There are no jump scares, don’t worry. There are no scary things usually dwelling in the pipelines, like rats and giant cockroaches. On the contrary, the underground world of the Pipe is inhabited by creatures that remind me of people. They might not seem like people when you look at them, because the art work is a bit grotesque, and the game in itself is surreal. However, I did recognize some real people I know in a few characters of the Full Pipe Adventure.

First things first. The adventure starts off as Dude is sound asleep in his bed, and a giant hand reaches from under his bed and grabs a slipper. I have to confess, my heart sank at this moment because I had a bunch of young nephews around me – they love the point and click stuff. That’s it, I thought. Their parents won’t thank me for exposing them to nightmare inducing content. However, I couldn’t convince them to play something else because some immediate and deep subconscious trigger has been activated, and so we played on. And on, and on, until we finished the game. We laughed, scratched our chins, argued, nearly dropped the tablet, but we loved every bit of this weird game.

So, Dude wakes up and finds his slipper missing, so he starts looking under the bed. It’s predictable. What was not predictable was there was a hole under his bed, indeed, and he fell into it. Hello, Alice. Dude did not find the Cheshire Cat in the hole, but he did find a whole bunch of characters inhabiting the world of the pipe. They occupy separate rooms, and have their likes, dislikes, things that make them tick and passions. 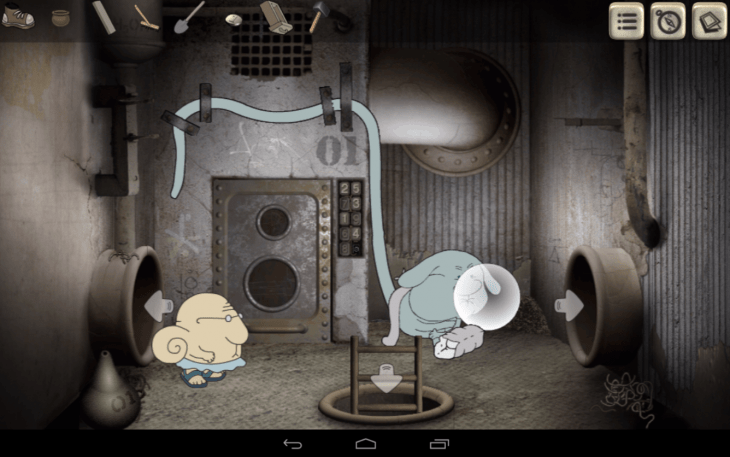 Dude’s aim is to find the missing slipper, but honestly, I totally forgot all about the slipper in the process because the adventure itself is more interesting than its objective.

There are some ten chapters with 38 rooms in them, and the adventure is not linear. You can explore the rooms available to you, but the next chapter gets unlocked when you solve the puzzles in the current chapter. The puzzles are subtle and not overly difficult and they’re mixed with funny arcade games. Not to say it’s too easy, however, because the relatively simple puzzles are followed by the downright hard ones. They may even seem nonsense or counter-logical to some, but once I was in the mood for the atmosphere I understood the nature of the puzzles. It’s quite simple – think surreal. If that sounds too hard of a challenge, get your kids to play with you – it appears to be easier for them to pull the plug on the routine reality and think outside the box. 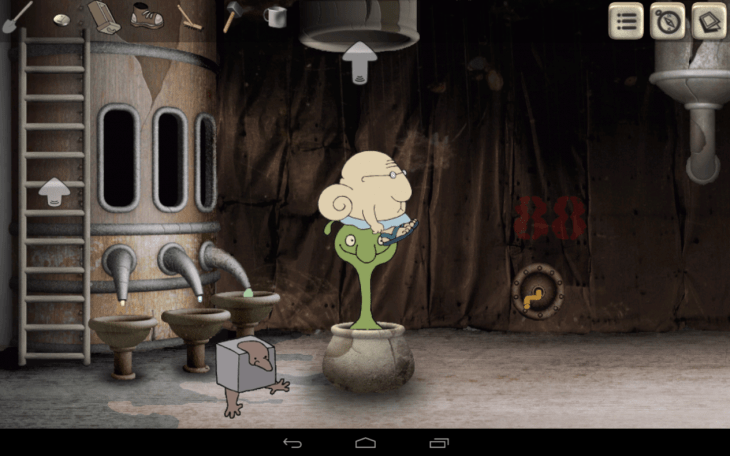 The puzzles aren’t always obvious, and to help you with the struggle there is a hint system, which is built to make you play more than use the hints. As you start the game, you have 5 free hints, and you use them immediately within the first chapter because you need to get the hang of how things work here. From there, you have to wait 40 minutes to get the next hint, or buy hints via IAPs. At first I thought this was ridiculous, with the game’s price tag being set quite high. However, by now I realize this is the perfect way to motivate the player to wander around and poke at things instead of waiting for the hint or buying it. The number of hints available per each puzzle varies, and with proper investigation you won’t need to unlock all of them to solve a puzzle. 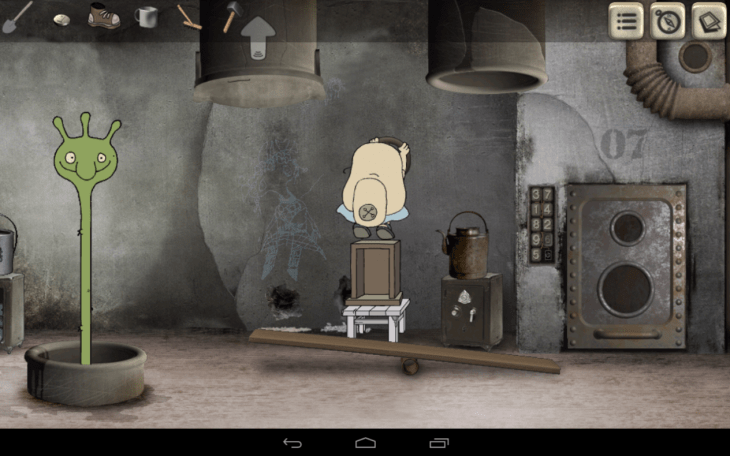 And wander you will, poking at the characters and their belongings. You will want to trade with them, and you will need to buy some things from them to complete the puzzles, but they may not want the trash in your bag, so you will look for the things they might be interested in. Figuring out what the character wants is one of the interesting parts I like about this game.

There is a handy notebook at the top right corner. This is where you see the immediate quests available to you in the rooms, the hints, the countdown timer that shows you the time left till the next hint becomes available. The notebook also contains the gallery of all the characters you have met so far. Many puzzle assignments contain the name of a character involved in it. The name is linked to a page in the notebook with the character’s photo and a short description of the character’s story, or the things that he/she likes. Thus, you are never confused about who is who in the world of the pipe. 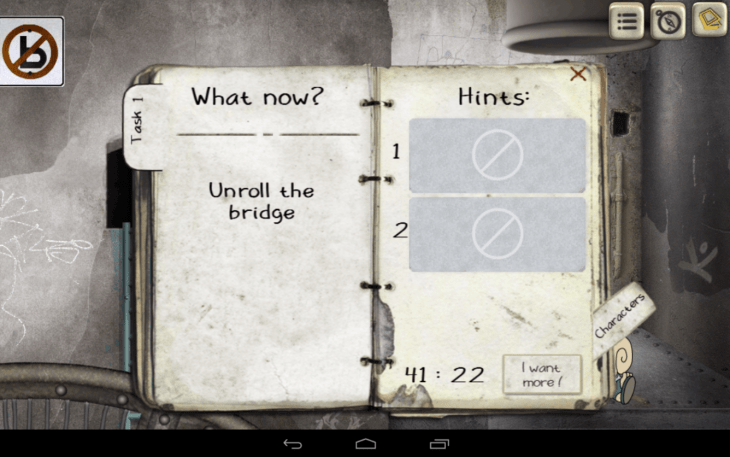 Some rooms contain quite tricky entrance and exit doors that can be activated only through a series of complex sequence of actions. Luckily, once you figure out the sequence once, you can then travel in and out of these tricky rooms simply by using the map. It’s next to the notebook, and lets you see where everyone is in the underground city and travel to the unlocked locations omitting the travel-related puzzles you’ve already solved. 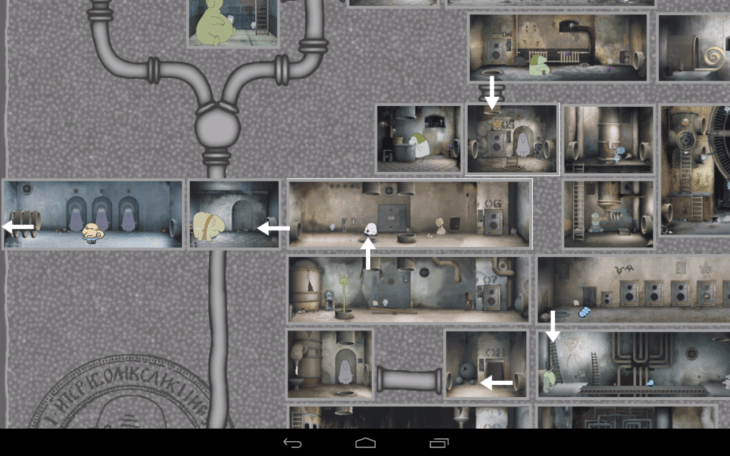 Don’t be surprised when you don’t find any dialogues, or any narrative except for the characters’ descriptions whatsoever. In fact, I got so immersed in the gameplay I did not notice the absence of the dialogues or narration.

The subtle humor is there, in the puzzles and the characters. It’s amazing how expressive a mute character can be, and when there is a bunch of them, each one a unique story, the adventure comes to life. 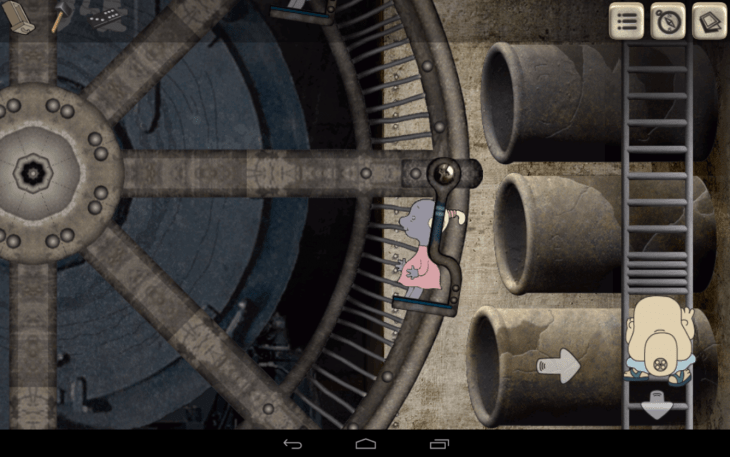 The UI is simple and intuitive, and so are the controls. Tap on something to see if it’s interactive. Sometimes the interactive things are highlighted with green. The only nag I found was the arrows that let you crawl the pipes. Sometimes, when I tap an arrow and Dude would start moving towards the exit, I spot the thing I was looking for and want to cancel the last command and pick up the thing instead. But no. Once the exit from the room command is registered, Dude exits. You have to go back to the room again. At times, this is daunting. 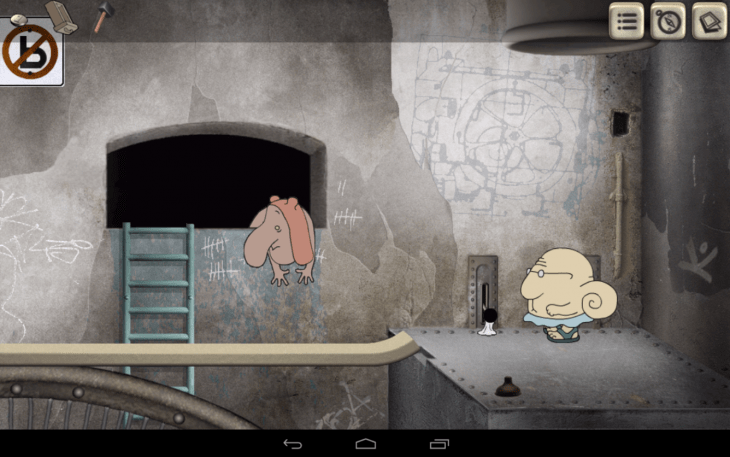 At first, I found the artwork of Full Pipe Adventure somewhat grotesque and gloomy, but by chapter 2 I got so immersed I changed my opinion altogether. I love the Cactus, and the still elevator woman, even though her scene is not the most age-appropriate, but it gave me a good laugh. The final scene with the Dark Burrow Dweller is hilarious, and I found the game to be perfect for relaxing and unwinding after a hard, stressful day. It totally took my worries away and tuned my mind to a different frequency. 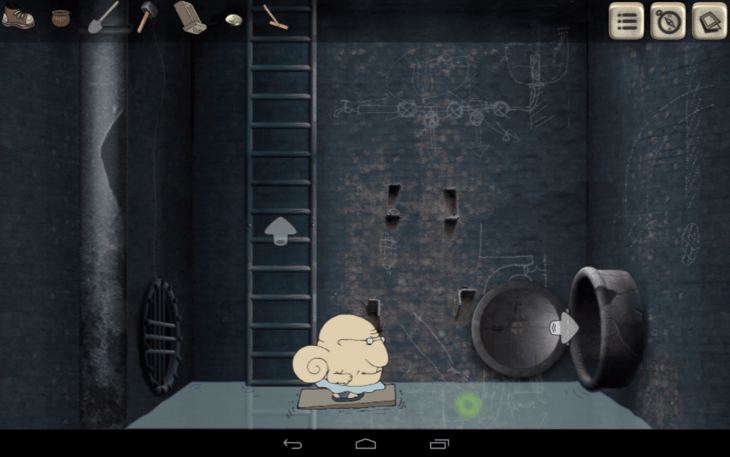 It is weird, but it’s also kind in a subtle way. It’s totally non-violent and even endearing at times. The enamored Giraffe glued to one pipe and his girlfriend’s voluptuous hips stuck in a different pipeline – can you help them reunite? A giant steampunk gizmo wheel with tiny soldiers swinging in its chairs – what does it do? Or, can you use a shovel to row? Wacko is adorable in his spirit of contradiction, especially with the plunger on his face. The mini-games are fun and never too difficult, or neck-breaking fast. The whole experience is laid-back and relaxing, so why rush? Enjoy it instead. In fact, when we finished the game my nephews wanted to just keep wandering in the pipes.

The music is jazzy, and adds more artsy atmosphere to the entire experience. I feel like I’ve been to an art exhibition or a show, not just played a mobile game. The sound score is subtle and funny.

Being the curious guy that I am I started looking for more art by the same Ivan Maximov and found a slew of wonderful animated short films, and got to like quite a few, like Bumbum.

It’s definitely not the candy Disney art you are used to, but it’s kind, ingenious, unique and for some reason stays with you. 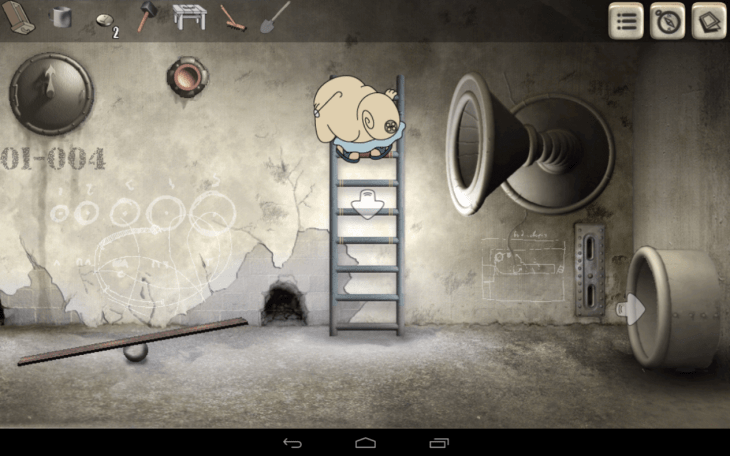 This game is unlike anything you have played before, even if point and click adventures are your thing. The point is not the mechanics, but the style and the atmosphere. You either love it or just don’t get it, in which case you won’t be replaying it. In my case, I am keeping the game for a stressful day to set me in the good mood because I like it. The first play-through took me two days, but you can complete it in one go, if you don’t need those hints much. You can also linger for a week if you play solving one or two puzzles at a time. That’s the catch – the game does not take you by the hand. You are free to set your own pace. 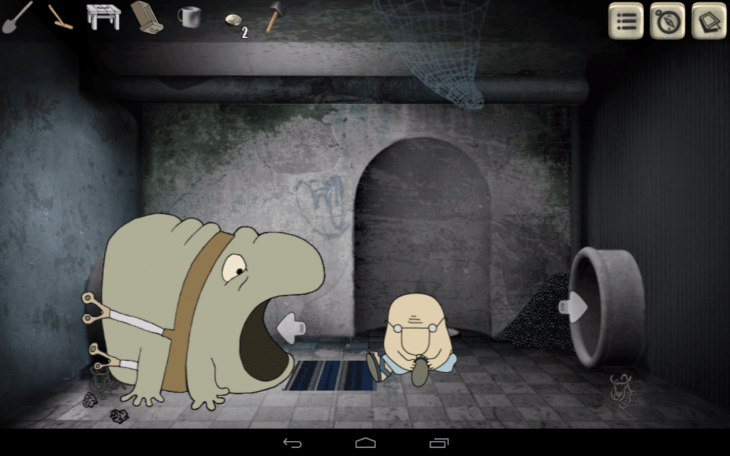 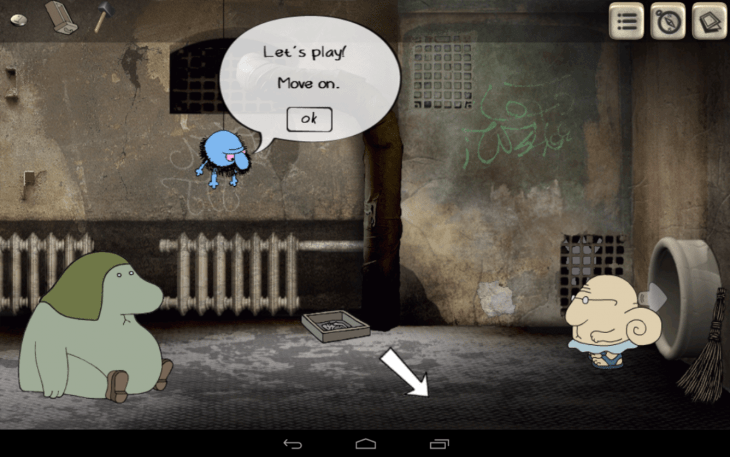 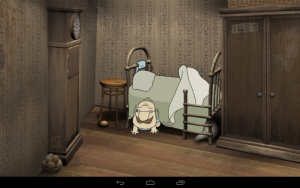 I don’t like to say “this game or movie is not for everyone,” but it’s the inevitable conclusion I have made after completing Full Pipe Adventure. Is there something wrong with it, you ask? In my opinion, no. I think it’s one of the best mobile games as far as the artistic value is concerned. It’s a perfect getaway from the routine and the ordinary, and it’s surprisingly positive, optimistic. This game is definitely art, and how you feel about it depends on you. If I were to give you a point of reference to let you try to guess if this style is your cup of tea, I would suggest you watch the short animation film by the same author I listed above, or read the user reviews and take a leap of faith. I did, and I am totally enchanted by the subtlety of the humor, the muted characters and their world, and the whole adventure of Dude. I also discovered that kids tend to get totally hooked by the game, and when they start playing, a couple of hours’ worth of silence is guaranteed. The only downside of Full Pipe Adventure is the somewhat pricey $4 tag, but I also think it’s worth it. The point is the audience is used to paying such money for AAA-dev games, so an indie game may struggle to get through to its audience. I would suggest a temporary discount, or a price reduction to get the traction. It would be a shame if this game stayed in the gray zone of the play store.