The following review of the Game of Thrones Ascent was written by a loyal fan of the HBO series and George R. R. Martin’s fantasy novels, rich, deep and sinister A Song of Ice and Fire. Developed by Disruptor Beam, the mobile game first launched as a Facebook game, with versions for web browsers, then slowly made it to the iPads, and now, just a few weeks ago, it finally launched on Android devices and iPhones.

The game is free, but offers in-app purchases, and we will explain how they work later on. 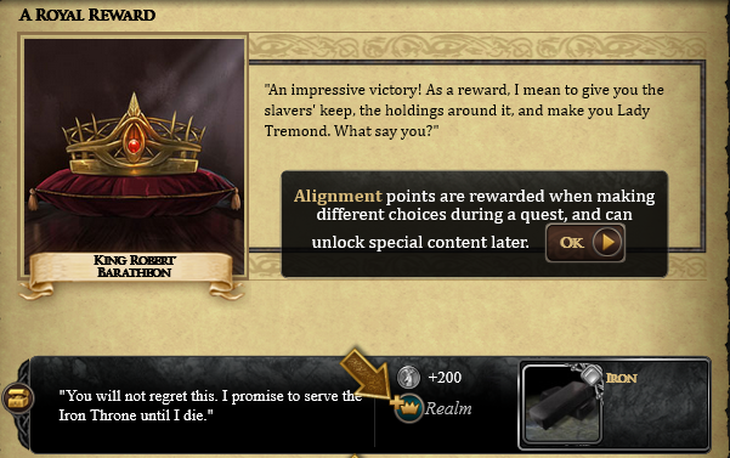 The story-based game takes you to the fantasy world of Westeros, and here comes the first A+ for the developers – they do know the world of Game of Thrones better than you would imagine. The intricacies of plot are well integrated into the game-play, and you will have your chance at luck, money, fame, power and intrigue in Westeros. A complex net of your interactions will require you make choices with every move. Each choice has consequences – fight and make enemies, bribe and get information, negotiate and maybe make some friends or allies.

At different stages, you or your sworn swords will have a chance to spend a night of love in a house of pleasure, or make one of your neighbors or allies your lover. Obviously, everyone in the game is bisexual, since my sworn sword is a female, and she spent a night in the house of pleasure when I sent here there to find the King’s mistress. 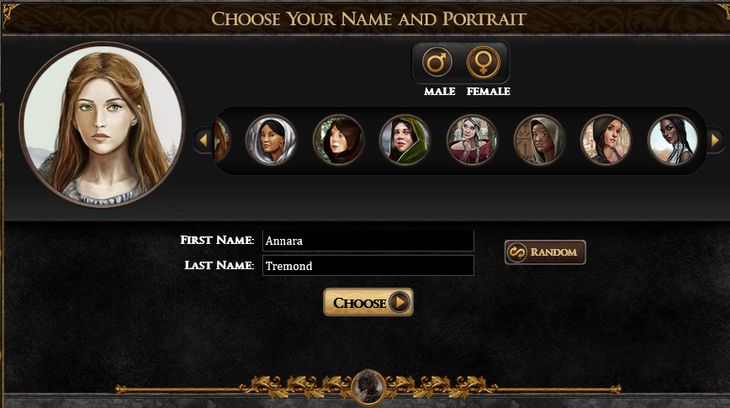 You will not observe battles as such. Whenever a quest requires fighting, all you will see is a timer showing how long till your sworn sword completes the fight. 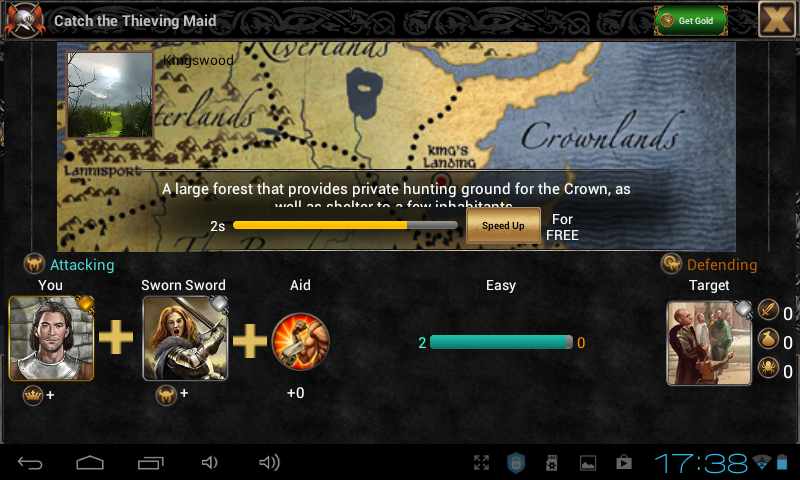 The first time I frowned was at the very beginning when I saw the ‘cast,’ or the list of characters you can choose to be. I wasn’t planning on choosing someone major, but the truth is – there are no major characters available on the list. All of them are present somewhere in the background, and you get to relate to them when you choose a house to swear loyalty to. However, the first downside, according to my personal judgment that is, is – there is no Emilia Clarke here! Neither is there Lena Headey, Peter Dinklage, Nikolaj Coster-Waldau, or Sean Bean. So, if you were hoping to interact with your favorite good-looking heroes, waive goodbye to those expectations.

Instead, you start off as a minor character, and climb your way to fortune and power through a series of quests, construction, intrigue and leveling up. You have a slew of male and female characters of different races and ages to choose from and start building up a story. You will have a choice of backgrounds from a royal bastard to mercenary, noble knight to noble by marriage, intriguing whisperer to trader. Each background has its perks and pitfalls, just like in the series. You can choose the Lannisters, but beware of their revenge if you should betray them. You can choose the Targaryens, but you will have to endure secrecy and perseverance because you live in a Baratheonian time, with plenty of events coming to Westeros, so choose your House carefully. 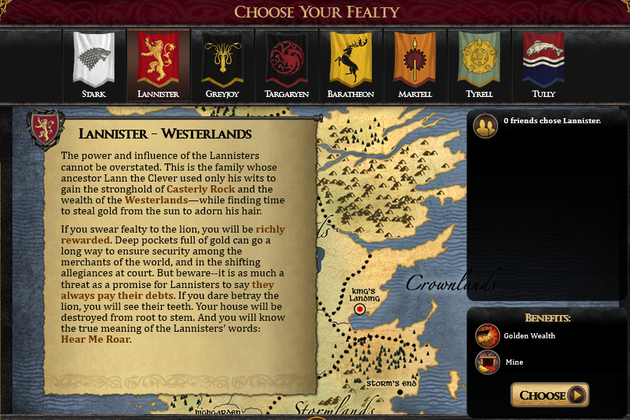 Now, the structure of the game is so robust you will need to follow the guide as you familiarize yourself with all the menus. Since the game-play is story-driven, you will achieve status, hire recruits, make influential friendships and ascend the noble leader board through a series of quests and upgrades. You will recruit sworn swords to complete different quests for you, which will earn you silver coins. The latter you can spend on constructing buildings and upgrading them in your dominion.

And here is when the tough part begins – you don’t get to play unless you pay, or you got the nerves of steel to wait, or play while you multitask a dozen other things. It is possible to keep the game running in the background when you play in the browser, but this trick won’t work when you play on a mobile device, alas.

Design is hand-drawn, atmospheric and impressive, even though all the images are static. 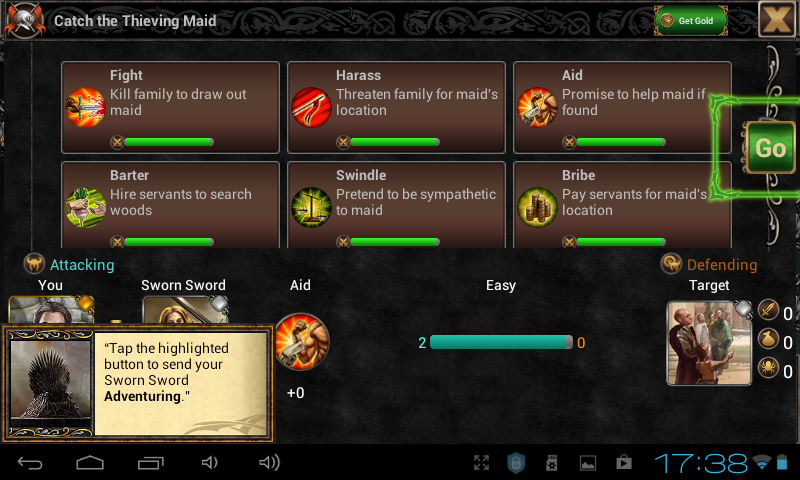 I have mixed feelings about the game. On the one hand, it is an in-depth rendition of George R.R.Martin’s fantasy world. On the other hand, all you do is navigate from one menu to another and wait. There is a lot of waiting here, and some players suggest if it were a one time $5 purchase, they would have been much better off if it meant they did not have to wait for the things to complete: quests, construction, crafting. However, when you take a look at the in-app purchases, you realize there will be no such thing because the developers earn a lot more with the freemium model.

On the flip side, the mobile version is so buggy I found myself banging my head against my table in despair – one crash followed another. First, the game required I have a better connection and more memory, even though online heavy-weights like Star Wars Assault Team played just fine before that. Sitting right next to my modem did not help.

Next, the game loads infinitely slow and when it finally does, it may crash the moment you least expect it. You are most sure to experience a crash when you haven’t waited for all the elements to load and tapped on something. The cup of frustration started filling out for me.

Next, the waiting time. If you do not plan on spending real cash for speeding up construction or production, or quest completion, you will have to wait for things to come. For example, you might have a quest pending, but your sworn sword needs a long sword your smithy can’t craft without iron and other things like stone and wood, which you can not produce until you unlock a mill. So, you start a long chain of to-do processes, and before you know it, your game looks like this – three or four 20-minutes pending quests or crafting with nothing else to do but wait.

Here is when I started feeling sad – one minute in Westeros equals to 2-4 minutes in physical realm. Seriously, I checked. As a result, you wait until you are fed up with waiting. Multiply that by constant crashing or bugs, and the frustration soon overcomes any interest. 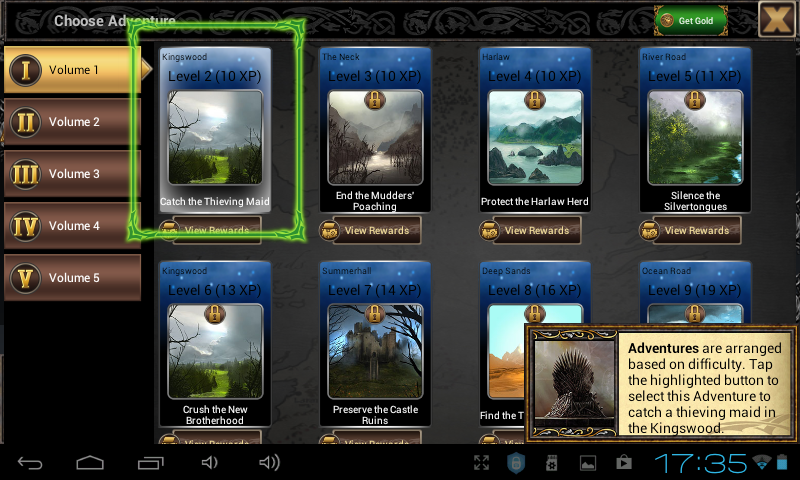 Game of Thrones has two currencies – gold and silver. You can earn silver as you play and complete quests, but you will need to buy gold. You can buy both currencies in different pack sizes:

You might as well spend some cash on a costume and take part in a staged event organized by Game of Thrones fans.

You will make use of gold in two cases – to speed things up, which is a major black hole, and to buy some premium items or followers. These can not be obtained via other ways, no matter how long and persistent you play. 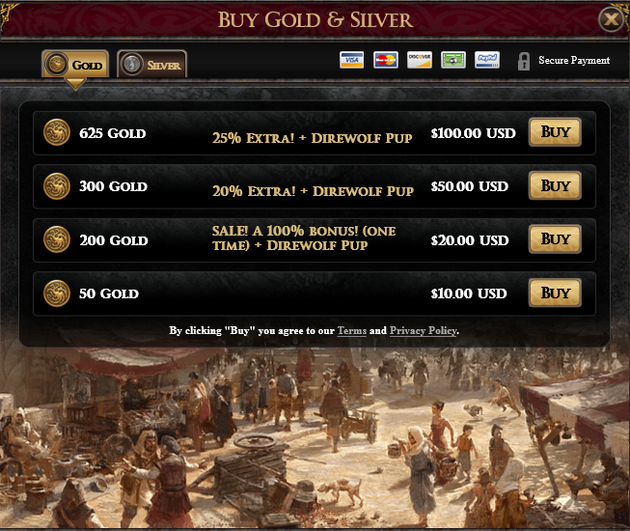 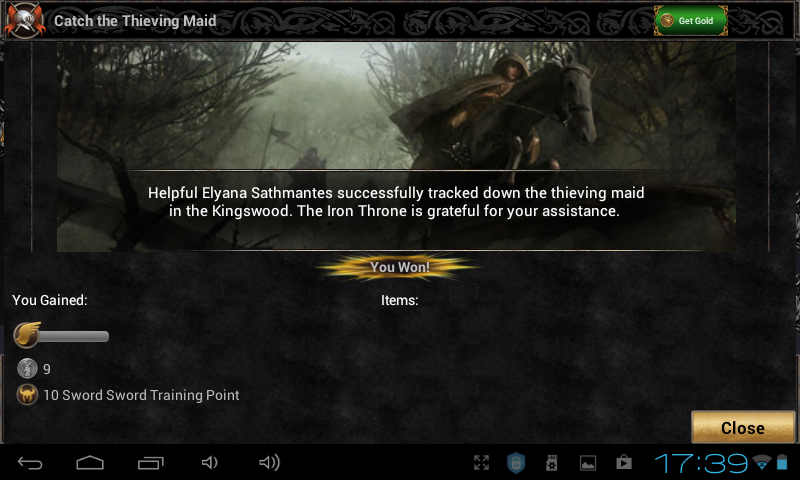 A loyal devotee of the HBO series, I was both looking forward to and dreading the mobile game. The mixed impressions stay with me now that I am playing – it is beautiful, deep and complex on one hand, but disappointing and frustrating on the other. It offers a chance to live a life of a Westeros lord or lady, with all the decisions, rewards, intrigue and challenges that come with it. On the other hand, the game does not provide the feeling of action due to extremely slow loading and constant waiting, which holds true for mobile and browser version alike.

There is obviously a gigantic and talented work behind this project, and I don’t doubt there is a huge fan base generated long before the game’s launch on mobile platform. However, as of now, there is just too much waiting and crashing, and it’s not just exclusively personal experience – read the reviews on iTunes and Google Play. 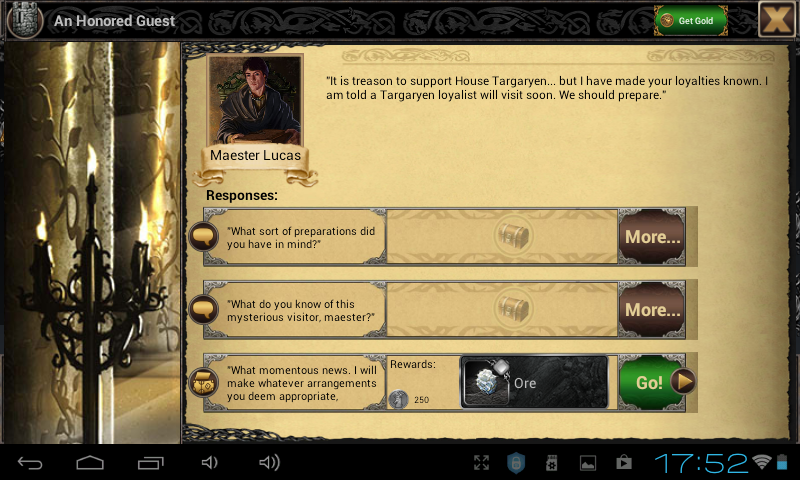 Overall, Game of Thrones Ascent is a beautiful, deep, story-driven game of intrigue and socializing, but a few rather significant performance and money-related issues make it a frustrating experience. Besides, it is truly disappointing there are no favorite heroes here.

Next time someone makes a Game of Thrones game, please, make sure you include dragons, white walkers, major characters of all clans and some real fighting. There is ample ground for a card-battler, arcade, or strategy here.