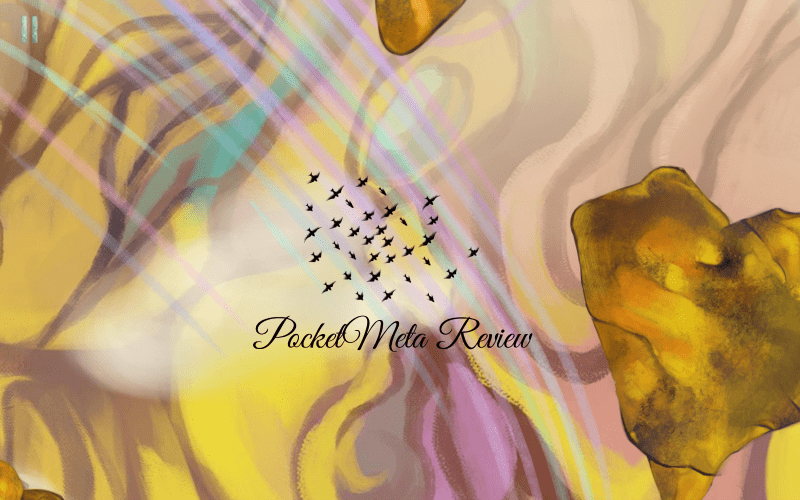 I made a compilation of epithets players used to describe Gathering Sky in their reviews – ethereal, flawless, phenomenal, stunning, incredible, adorable, beautifully stunning. “I literally cried at the end of this game. So moved!”

A musician playing in the subway

In April 2007, Washington Post published an eye-opening piece about a violin prodigy Joshua Bell, who tours the world and earns $1.000,00 a minute for playing classical music in front of the world’s elite – the women clad in evening gowns and diamonds and rich men in tuxedos. He said he’d frowned whenever someone’s phone went off in the middle of the concert, or whenever somebody coughed. “That was Bell playing the soundtrack on the 1998 movie “The Red Violin.” (He body-doubled, too, playing to a naked Greta Scacchi.) As composer John Corigliano accepted the Oscar for Best Original Dramatic Score, he credited Bell, who, he said, “plays like a god.”

Washington Post asked Bell to assist them in an experiment and play for an hour at the L’Enfant Plaza Station in Washington during the peak hour in the morning. So, he dressed in jeans and sweater, took a horribly expensive, one of a kind violin, and started with “Chaconne” from Bach’s Partita No. 2 in D Minor, which he calls “one of the greatest achievements of any man in history.”

According to the surveillance cameras, 1097 people passed by him, some 7 people stopped to listen, 27 people gave money, one tossed in $20, but the total earning was $32.17 in 43 minutes. There was never a crowd, no one stopped to actually take in the world’s finest music. One pre-schooler tried to drag her mother to listen, but the parent was too busy, too late to slow down. 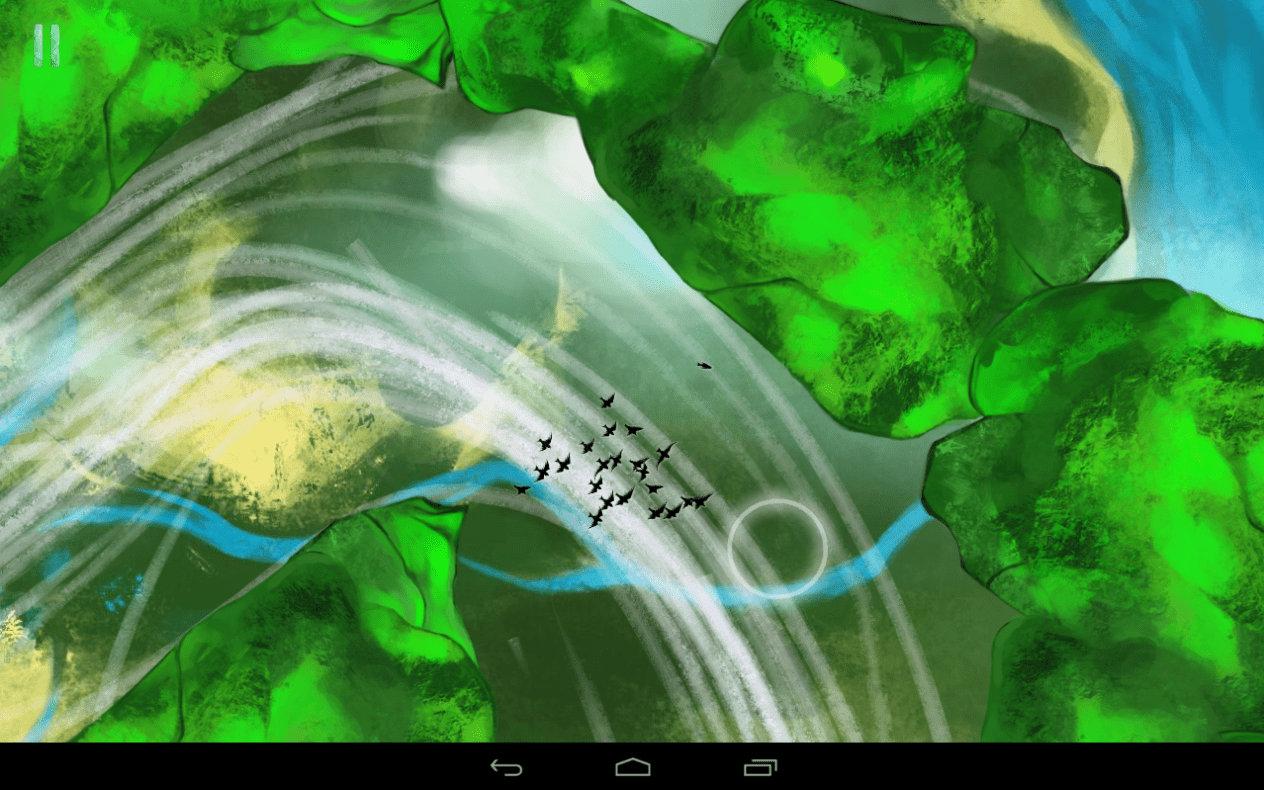 Gathering Sky is that guy in the jeans

Gathering Sky came around the same way. We, the consumers are in a hurry to be productive and to take the maximum amount of content for our money in the mobile games, or anything else we buy. Like programmed robots, we expect an objective, an obstacle and a reward in our mobile games. Whenever we don’t find those, we think “wtf…”

However, Gathering Sky killed all the background processes in my brain, disconnected it from all the distractions, muted the world around and taught it again to vibrate at higher frequencies. The ones it generates when we love, pray or meditate. Finding this in a mobile game is a rare instance. 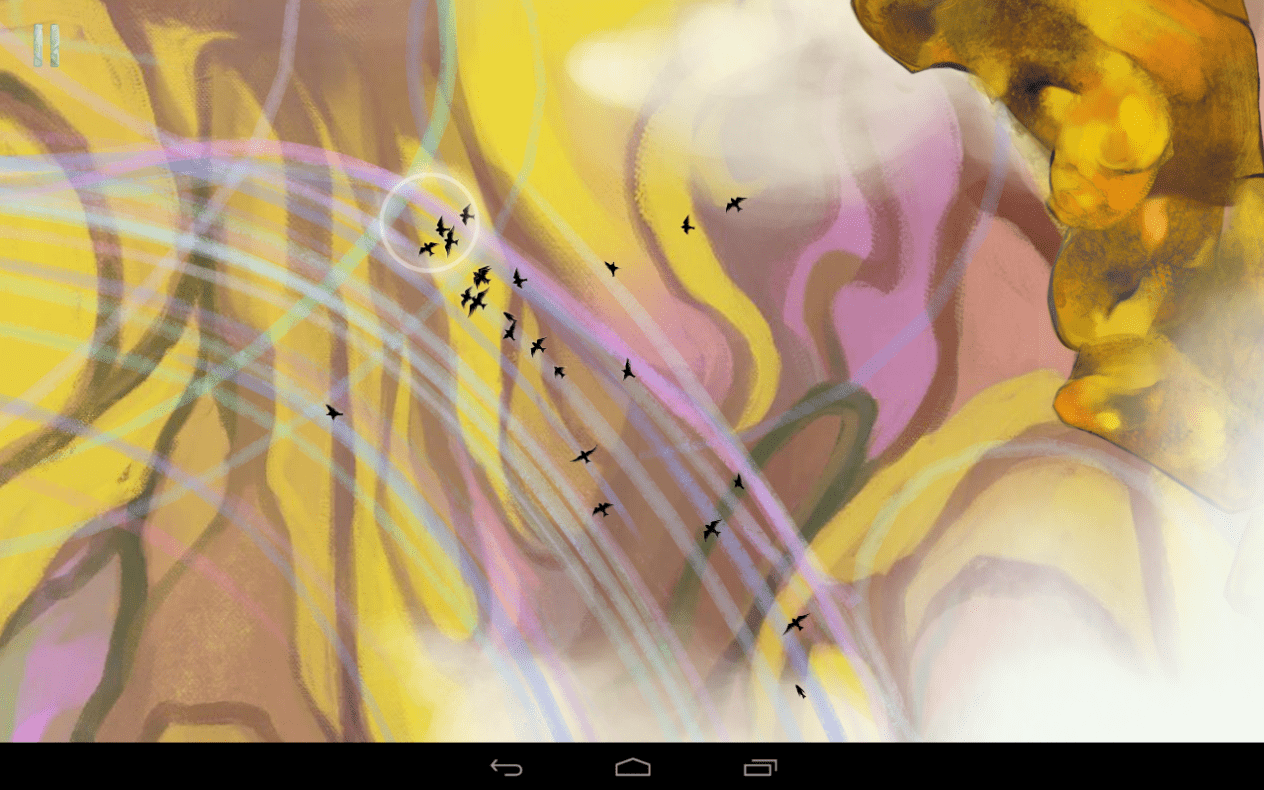 Not a game – an experience

This is how I suggest you treat Gathering Sky – as an experience. Already, you know it’s unlike anything you’ve played before, so if you think you can’t approach a game without expectations – better pass by. However, if you value real art, in its classical meaning, you have found a gem.

You control a bird on its way to … wherever. I think it’s a journey to the warm places where it can find a mate and nest. You might think otherwise. It might be a journey to Paradise, or outer space, or a fifth dimension. The opportunities abound because the world of Gathering Sky is half-realistic, half-abstract, opening ways to imagine whatever you please. 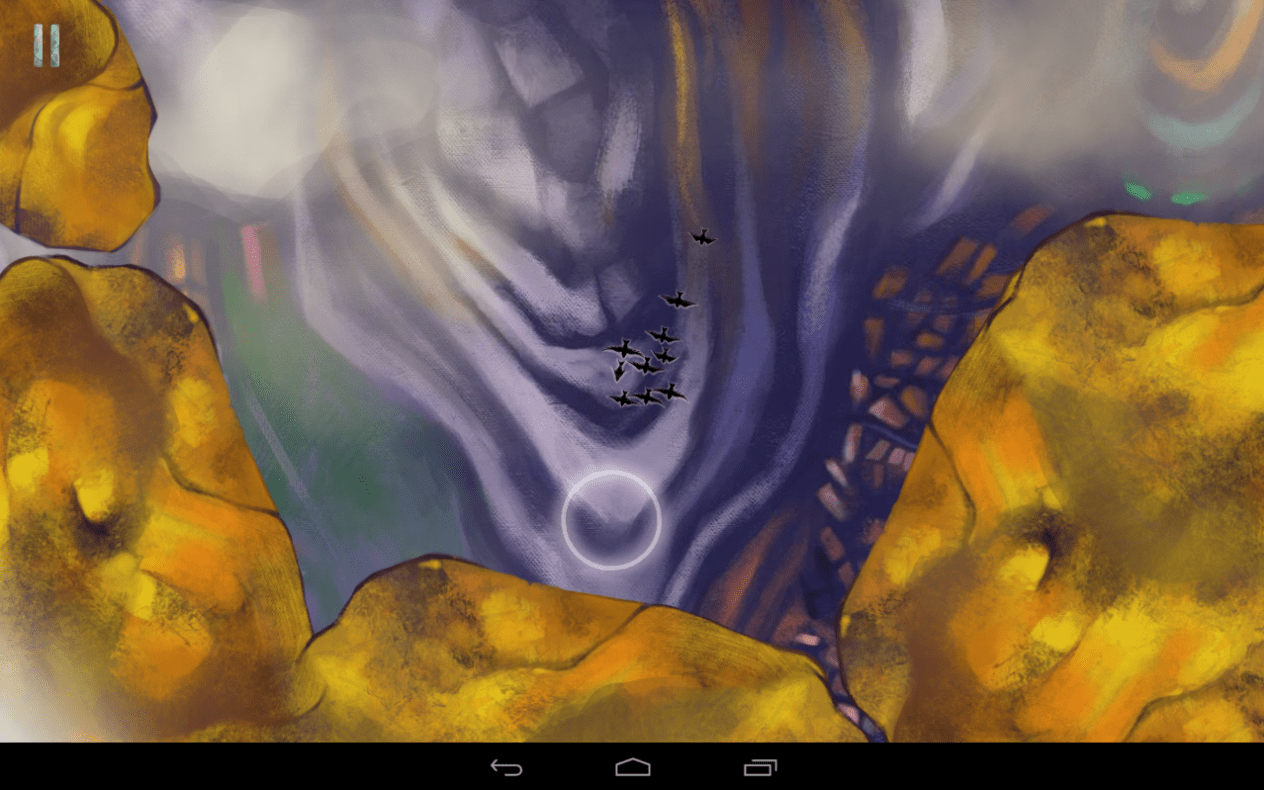 I enjoyed that; I thought it was fun. But then, something happened – I found a friend. A stray bird hiding behind a rock joined me, and now there were two of us. A company. As we tried to find our way out of a rocky maze, another one joined us. And then another, and another. Before long, there was a flock of us. 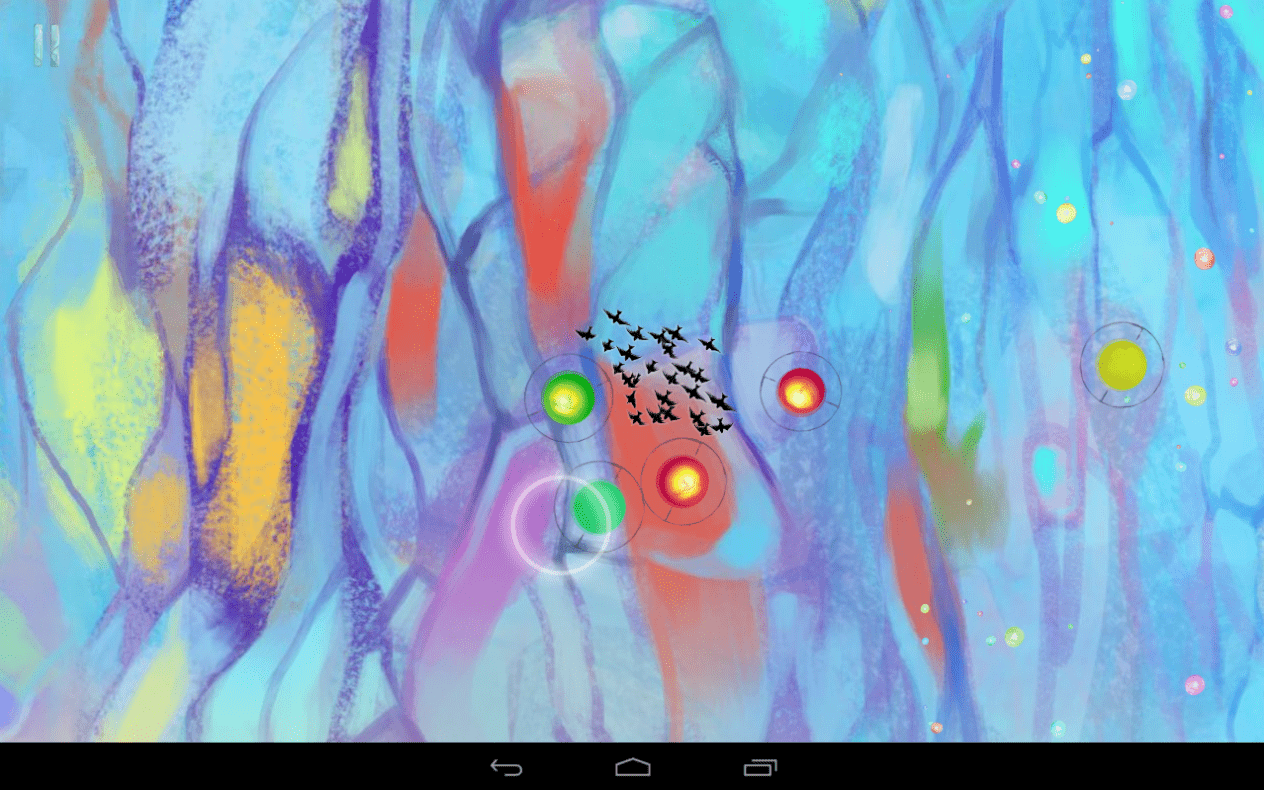 It’s an exhilarating feeling – having a flock of your kin flying by your side. It’s twice as fun to soar in the clouds and play with the wind when there is a bunch of you. It also plants an unexpected anxiety and the feeling of imminent danger because now you are responsible for them all.

No, there are no green alien blobs hunting your flock, but the natural things like the wind, mountain peaks, storms, darkness and predator birds that chip away from your numbers. It’s the journey of a flock as Discovery Channel describes it. 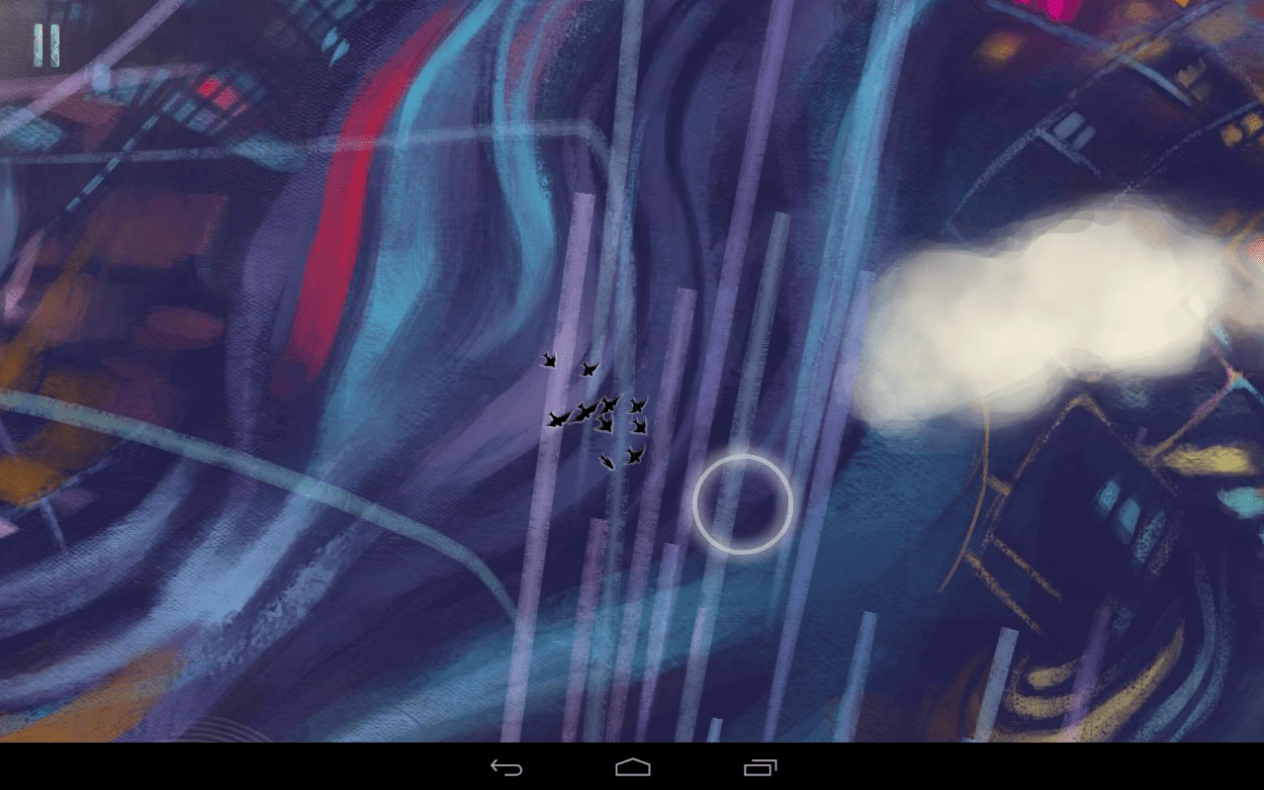 I felt my heart sinking whenever I saw a bird get lost behind and I was compelled to come back for it. I was so focused I felt my finger go numb from the pressure I applied. As you come back for a lost bird, the flock starts flying in circles you can sometimes watch in the sky, and it looks so natural. So, this is what they do when they fly in circles in a limited area – they collect their lost comrades.

Needless to say, when the dark hour came, and the flock moved through the night storm, it felt like I did not breathe until the level was over – so terrifying it was. I lost them all. I was alone again. It was a darn tragedy.

The ending is climatic, in a way unexpected and again, opening doors to imagining what that meant. It’s like watching Vanilla Sky and spending the night arguing with your family whether Tom Cruise died, or woke up. It’s inviting to have another go, and maybe do better this time, without losing so many of your mates.

Needless to say, a game that evokes such a wide palette of emotions is an artistic masterpiece. The sometimes soft, sometimes vibrant, at times otherworldly, at times van Gogh-ish landscapes are confusing and mesmerizing. Was that a city? Is this the outer space? Did I just die and find the birds’ heaven? Gathering Sky is a visual addiction – the kind that instantly makes its way to your desktop and handheld wallpaper gallery. 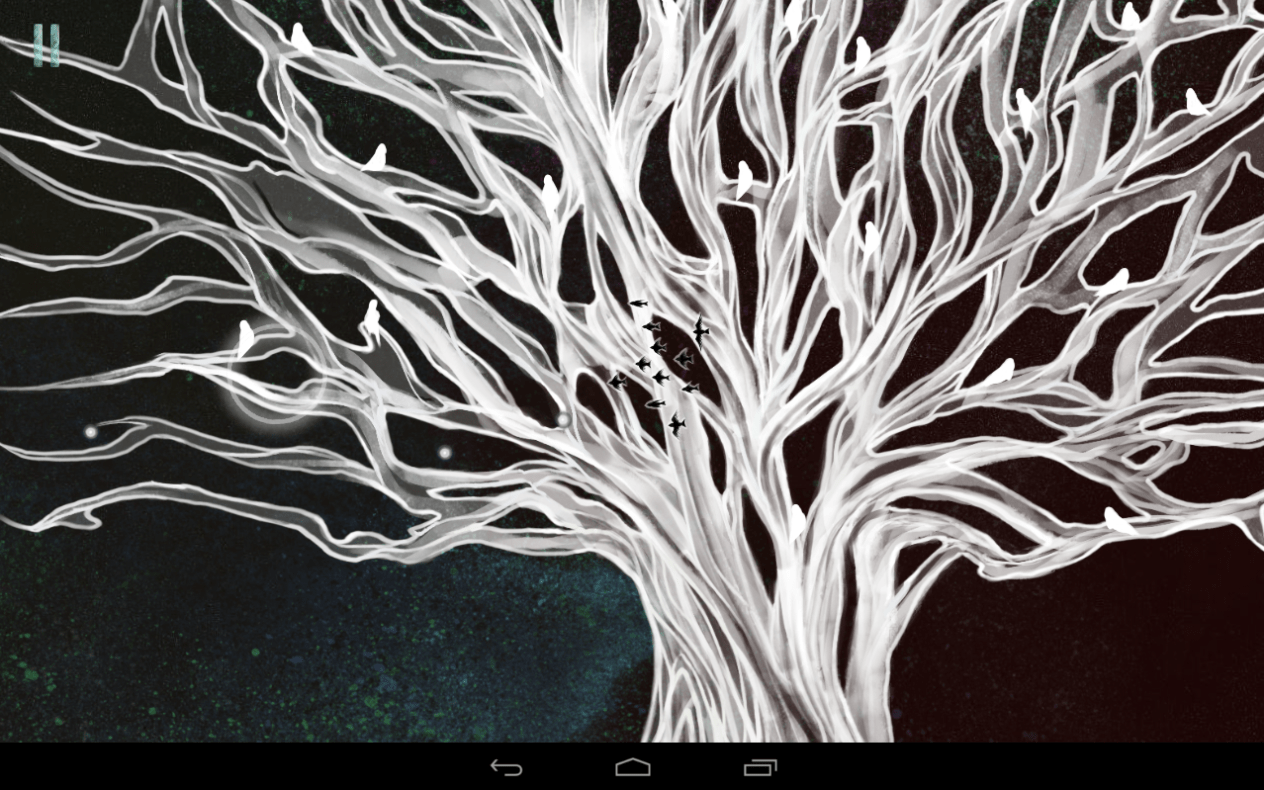 The music is equally ingenious, cinematic, emotional, engrossing. Dren McDonald is another discovery I made thanks to Gathering Sky, and he is now on my personal list of the best composers in mobile gaming where Tim Shiel (Duet), Siddharta Barnhorn (Out There) and Iamyank (Lost Sounds) are. The female vocalists Amy Foote and Karry Walker of Ultralash add more to the emotional intensity and bring up the chords I only found in the English Patient OST – delicate, hopeful, yet desperate. Here is the Soundcloud page for the game’s OST –

There is not much to say about the said criteria. It’s a one-time purchase, no ads, no IAPs. The six chapters will take you less than an hour in your first game. The progress auto-saves, but if you should quit abruptly it will default you to the latest saved checkpoint. The latter are never obvious – you don’t know where the checkpoints are, but it’s in no way a nag.

The game is neither difficult nor challenging. It’s just different, and if or when you let go of your expectations, you see why you can’t compare lettuce to Nike footwear – they just don’t have common points that can be compared. 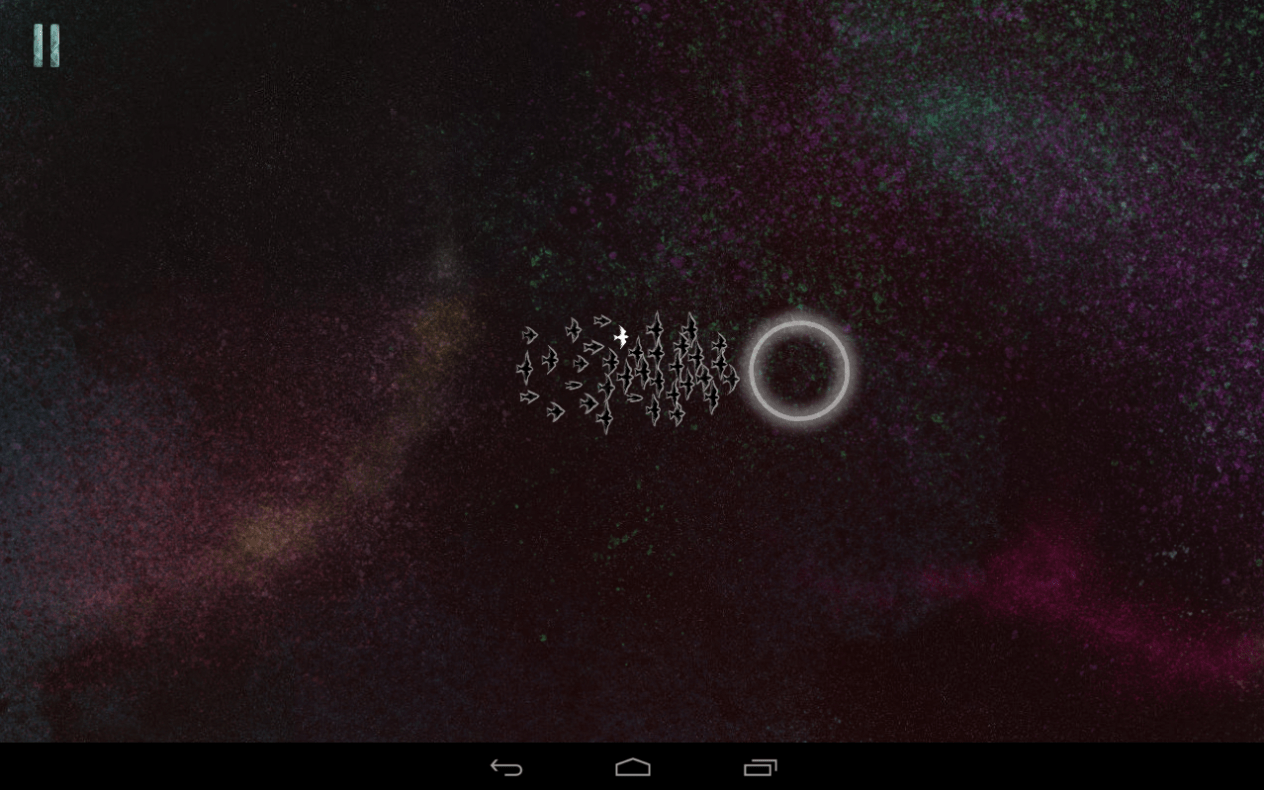 Despite the short playthrough, I see Gathering Sky remaining on my device for just as long as Monument Valley persists. Since it’s an experience to fit the mood, or set your brain at peace, you may come back to it numerous times. As I said, I sure want to see if there is anything I can do to be better at preserving my flock numbers next time.

Finally, it’s a great game for the kids and teens evoking compassion, empathy, the appreciation of the beauty in music and design, and exploring the mechanics without instructions. 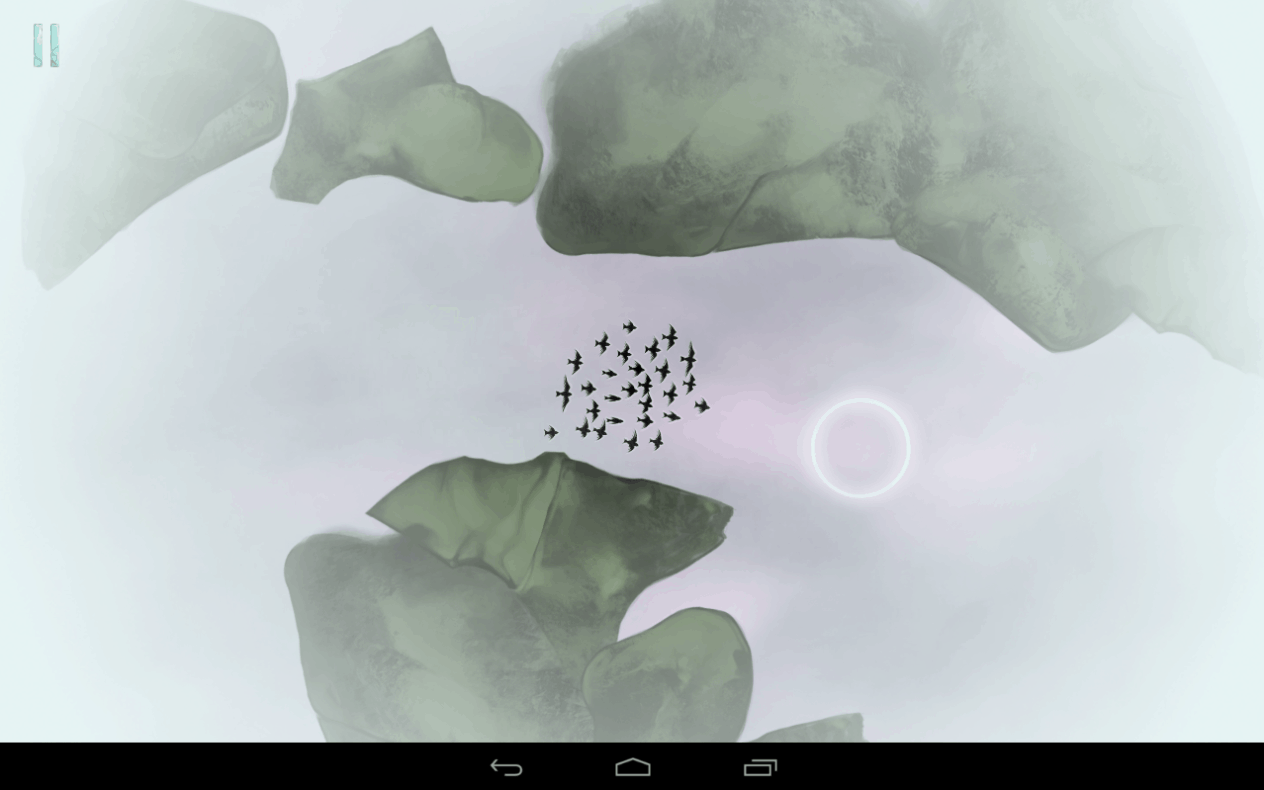 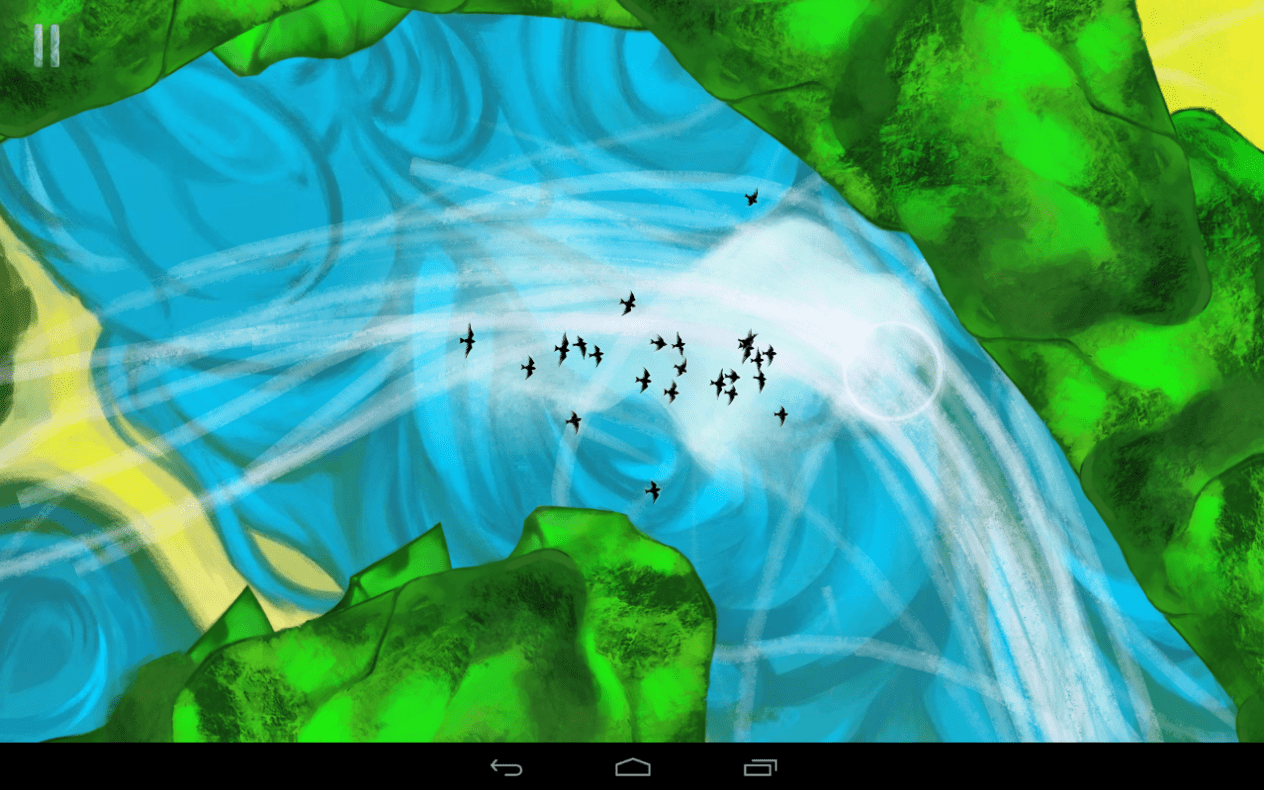 Gathering Sky is one of the best mobile experiences of the year, but unfortunately its audience is not numerous. Subtle and unusual, it’s a square peg in the round hole of mobile gaming. It’s Joshua Bell playing in the subway, but if you have the heart to stop and listen, you might recognize a genius in the street musician.