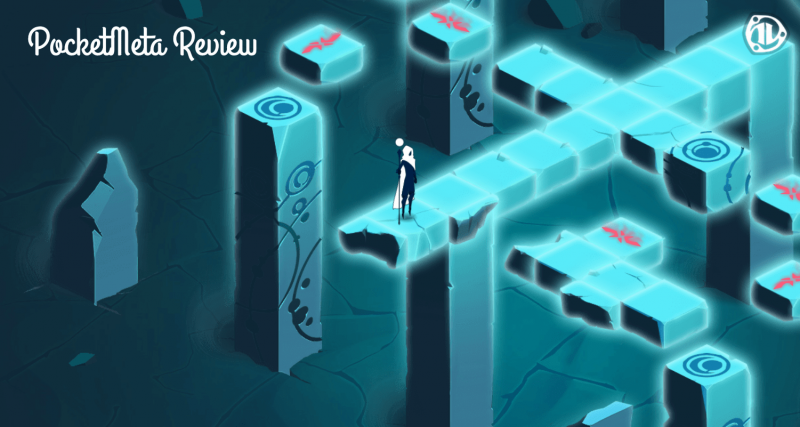 Dazzling and mesmerizing, Ghosts of Memories from Paplus International launched on iTunes and Google Play a few days ago, and we gave it a thorough spin. So, if you are on the fence about whether or not it’s worth $3, read on.

Whoa! Golden brown is my favorite thing ever

The first couple of levels of my gameplay I was literally all exclamation marks and couldn’t really come up with anything but whoa. The game looks bewitching, and every single aspect of its visual representation is a masterpiece. So, before you go too deep into the review, I dare say the artwork alone is worth the buying price, in my humble opinion.

Each chapter comes with a different look, and I never stop to marvel at the beauty and variety of the areas. Neon Tron-like, deep blue, snowy white, sophisticated beige, but the golden brown is going to my desktop wallpapers folder. 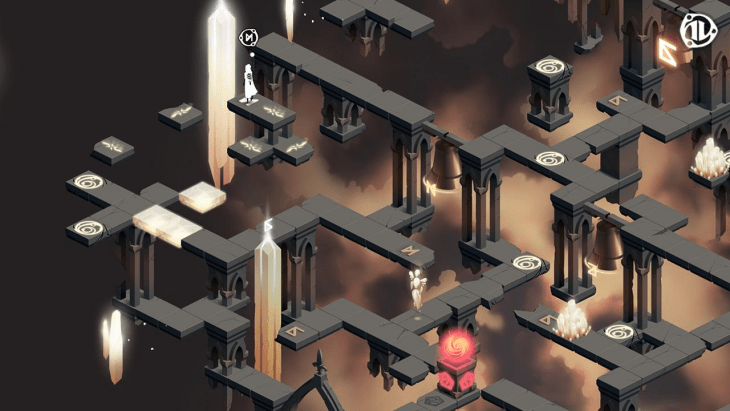 Don’t get me wrong, the looks didn’t seize to be fascinating after the first chapters, but when I came back to my senses I realized I was liking it even more than the acclaimed Monument Valley that inevitably pops up whenever you talk about Ghosts of Memories.

Yes, the latter probably sought its inspiration in the legendary game by ustwo, and it has a few things in common like the 2.5-D isometric perspective, also found in Lara Croft GO. Besides the perspective, the holy architecture-based puzzle thing is also relevant for the Ghosts of Memories, so you will compare the two games one way or another. Nonetheless, I would not think too much of this. Even though they are in the same niche and genre, they’re different and self-sufficient, and comparing anything to Monument Valley will leave the other party behind because MV was the first, the benchmark, the groundbreaking and the innovative. It laid foundation for a new genre of artful brainteasers on mobile, and made Esher-esque design relevant and trendy. That said, Ghosts of Memories can compete for the title of the best looking mobile game of the year. 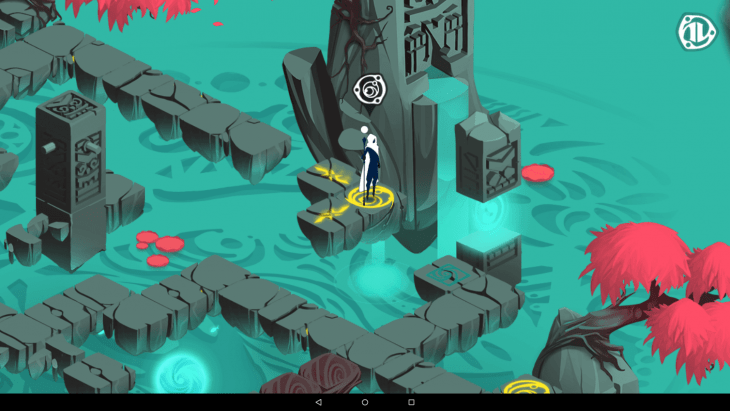 A damsel in distress

There is a story in Ghosts of Memories. A mysterious cloaked person named Charon [´karon] can be either a man or a woman because you really can’t tell. I think it’s a guy, so I will refer to him as “he” for the convenience of this review. Charon finds a magic scepter that entails supernatural power, but once he takes it in his hands he hears a woman’s voice asking him to set her free from her unfortunate misfortune. In return, she will teach Charon how to use the powers of the scepter. If I had a magic scepter like that, I would build 9 billion of houses and a huge Titanic for the world leaders and banksters. Wouldn’t that be a good start?

So, the guy in the cloak begins his journey through a series of some 15 chapters, each consisting of two interconnected worlds. In this respect, Ghosts of Memories reminds me of another MV-like game Outside World because the hero can find portals from one dimension to another, and changing something in one will affect the other. 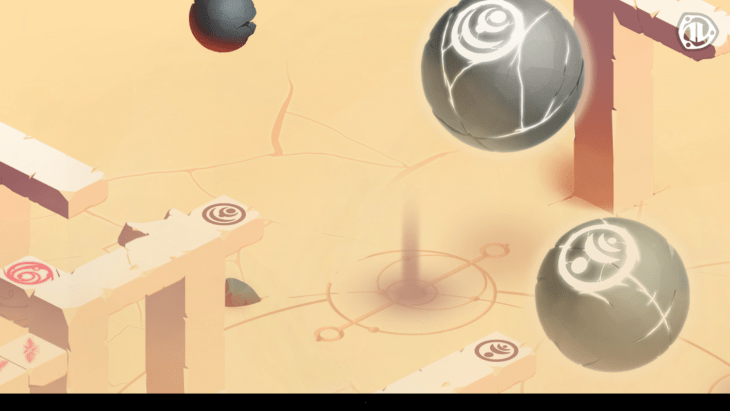 You tap to move him from tile to tile, from brick to brick, and that part of the controls is easy. What s not easy is getting the hang of how the bricks with the arrows work. There are red arrows on some tiles, and depending on their size and direction you can move the tiles accordingly. As a result, the tiles are limited in how far they can go and which direction. Other than the arrows, there is nothing that can help you identify the relation of some structures to the others, and when the optical illusion is at play, you may feel befuddled how some seemingly non-related levels can form a solid passage.

The further into the game, the more complex is the map. The areas are expanding. They become so large they don’t fit into a single screen, and you can never see the whole picture by default, which is an unfortunate inconvenience for me, especially when the symbols, totems and different portals need to make a coherent solution in my head.

Yes, there are totems, but they are nothing like the one in the Monument Valley. They are static structures you need to rotate or activate in some other way to affect the moving parts of the structure. Their design is wonderful and probably drew its inspiration from some ancient statues of Greece or Rome. 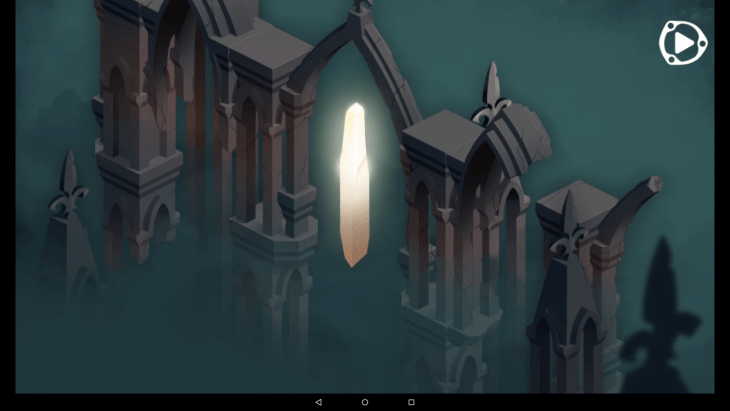 There are symbols, energy pools, suns, planets, and you will have to sort out their relevance to each other, which is no easy thing. I memorize a symbol when I understand its meaning, but when the game does not have an explicit explanation as to why these symbols are there in the first place it might be a challenge. On the flip side, Ghosts of Memories is the kind of game that lets the players get the idea of the mechanics, the story and the items at play on their own, so it’s a good thing, too.

Yet, the difficulty curve is a bit steeper than I find enjoyable. As a result, I never felt like I knew what I was doing and could not grasp the main “encryption key” to the puzzles other than moving the platforms around and hopping from one to another in hopes of reaching another random symbol. As a result, I was playing by trial and error rather than by decoding the logic of the symbols and their relevance to the other parts of the puzzle. In the end, the rewarding exhilaration of solving a puzzle had a sour aftertaste of relief that yet another chapter was over.

The very scale of structures in the both dimensions is rather impressive, but I’d rather see less tiles and more meaning. 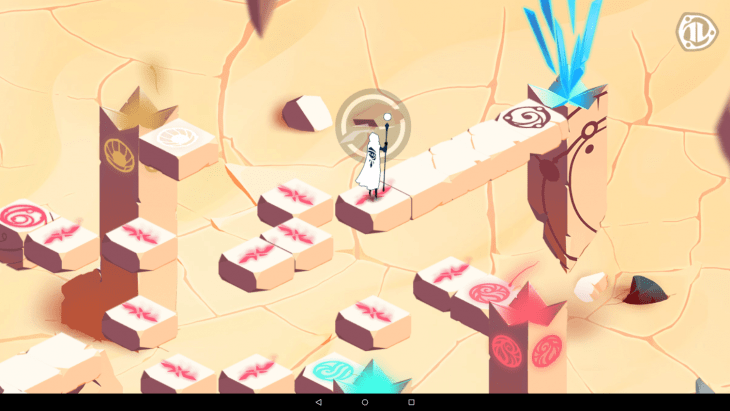 If you have 3-5 hours on your hands, you can probably beat the game in a single go. I couldn’t. Not because I did not have the time, but because it was somewhat tiresome. My brain demanded a different activity to refresh and reboot from all the puzzling in Ghosts of Memories. I have no idea if there is one or several ways to solve each chapter because the structures seem so stretched out in space my mediocre brain does not see the bigger picture.

On the other hand, Ghosts of Memories is perfect if you take it chapter by chapter in short sessions. It’s playable offline, but you would want to be comfy and focused when playing. All things considered, it’s not a big game, but there is more gameplay than in the said MV. The replayability is good if you like the atmosphere and find it relaxing. 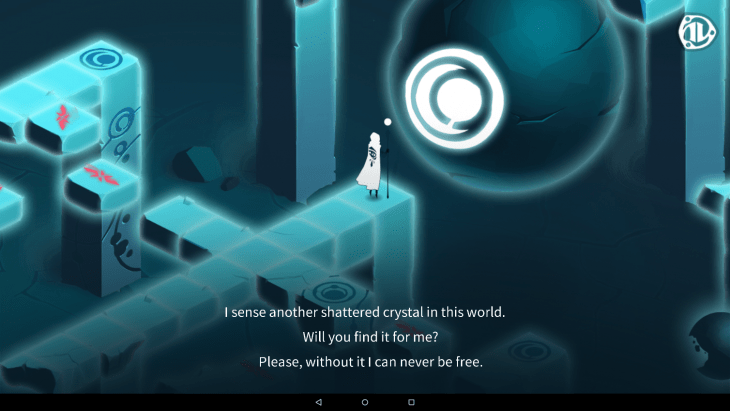 The virtue comes with a flaw

There is one nag, though. The ending is anti-climactic. I don’t know what I was expecting from the mysterious lady, but she had a kind, beautiful voice, and I think I anticipated a Blue Fairy, or a glimpse at Nicole Kidman at least. Or Vendela, remember her in Batman and Robin, when she was frozen in an ice cube by Mr. Freeze? I also feared this could be a major setup, and the cloaked guy would end up dying a slow and painful death from a giant blood sucking female octopus, the one only Ridley Scott could create. Ah well, lots of ideas come to my mind that could add a little spice to the culmination. My hope is the developers will expand the game, and create new levels with more enjoyable puzzles and a new adventure for Charon. What an odd name for a guy… 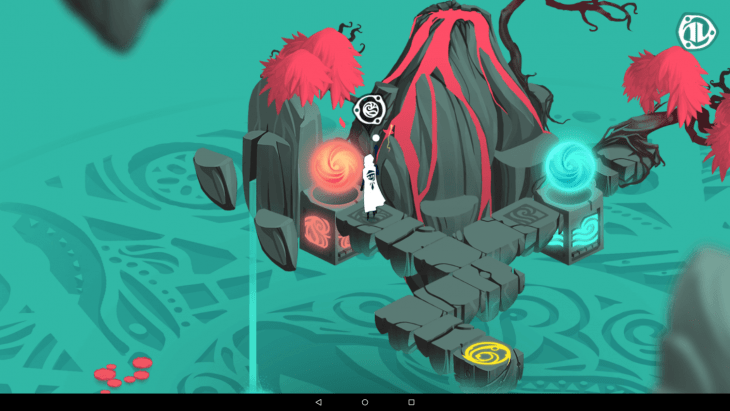 Ghosts of Memories is definitely a must-have this season. I dare say it’s one of the best looking games of the year, and that alone deserves a recommendation. The golden brown chapter had me hypnotized. It’s not long, but it’s not too short, either, and should keep you busy for a good while. The puzzles are somewhat overdone and feel more tedious than enjoyable, but if you play moderately, one chapter at a time, you won’t feel the weight. Now that Ghosts of Memories is available, I can finally compile my list of the best games like Monument Valley, and GoM is definitely one of the top notch titles. A brilliant design, somewhat overcooked puzzles and a good story – that about sums it up.