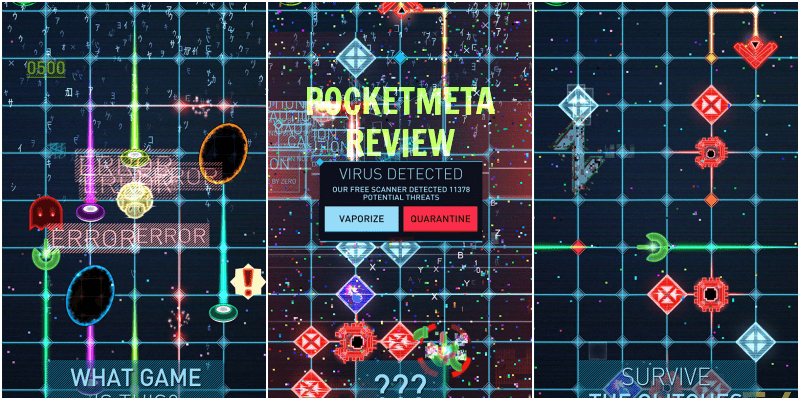 It’s Gltch, not Glitch, and the title must be the biggest mistake the developers made because the game is literally buried in the depths of the Google Play – it is not immediately obvious the “i” is missing from the word, and when you search for glitch games, options abound.

Now that we have the name sorted out, let us take a look at this addicting Pac-Man style indie gem.

While Pac-Man is familiar and you know all the ins and outs, Gltch wants to mess with your head. Here is the catch – it’s fast, frantic and the better you get at it, the more glitches it throws your way. Here, you do not unlock perks and awards; you unlock new glitches, like a controls lag, some kind of buzzing, interference – there are over thirty glitches.

So, the more you play it, the harder it gets – at least that is straightforward, but it gets harder due to the multiplying glitches that make it challenging not to get eaten.

The premise is quite simple, however, eat the blue items, avoid the red items. The rest can be used to bomb the red guys, or get some kind of power-ups. Or that’s what they seem to be doing – the game is so fast, you barely have time to work out a plan, or a strategy. Nope, you just run for your life because the reds spring like mushrooms in the rain on your grid, and the blues pop up and vanish just as fast.

There are two modes – infinite and iteration, and 30 levels overall. The iteration mode becomes available once you reach level 5. The game keeps your stats – the number of times you played, the levels you cleared, etc. The leaderboards and social sharing is available for the competitive folks, but luckily, you can play it offline.

There are two options – joystick and swipe controls. The default is swipe-based system, and having tried both I can say it’s incomparably easier to go with the swipe because it lets you focus on the grid, whereas the joystick has you looking at joystick to turn in the right direction. After all, the joystick is a button and you need your fingers thin enough to hit it right. You get the idea.

Needless to say, it’s meaningless to complain that sometimes the game throws a tantrum in refusing to register your swipes because that is the whole point of the game based on glitches. Is it fun? Maybe, but it sure can make you desperate.

In terms of the artwork, Gltch is my favorite Pac-Man on mobile. It manages to bring the old-school, traditional feel of the fruit-eating ball and the sci-fi Tron looks topped with a darn cool soundtrack. The fast replay makes the gameplay experience fluid and addicting, despite its being based on frequent deaths. Overall, the game looks awesome and every bit and piece of its design is a digital marvel, making it stand out from the peers.

You do have some 35 lives as you start, and it’s more than enough for some three or four extended coffee breaks or a commute trip. These lives replenish over time at approximately 10 lives per 10 minutes rate. Otherwise, to get more lives, you either need to accomplish mini-missions, like kill 8 malicious programs within a single gameplay, or accumulate one million points, and the like, and each accomplished mission brings you some 2-3 lives, or buy them via in-app purchases that start at $0.99. You can also buy daily double-rs and triple-rs for your XP. When your lives drop to zero, you can watch a video ad to get some for free.

The mini-missions that grant you 2-3 lives seem hard for an average casual player, so it could be nice to increase the number of lives they reward

Gltch is a competent, quite novel take on Pac-Man, with chic Tron-like graphics and soundtrack, great replay value, quick, intense gameplay sessions perfect for short plays on the go. The fact that it makes the glitch a main gameplay mechanic does not break the game, but makes it hard, which is fine as long as you are not looking for easy challenges. Its IAP system does not press you for money and lets you play at a moderate pace without paying. Although, supporting indie devs means we get to play more indie games in the future.