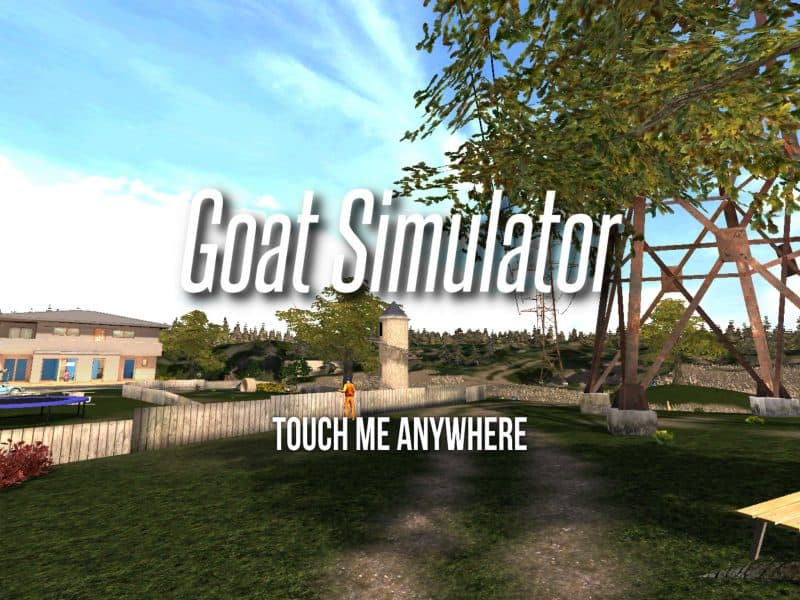 A few days ago, we mentioned that Goat Simulator had officially been ported over to iOS and Android, and was available for purchase at $4.99. It had been known for a while that this port was coming, with most of the mobile gaming community rather excited about it. That was only further verified by the fact that this game has already sold over 100,000 digital copies in the first few days it has been available.

I haven’t played the original PC version myself, so this review will be based 100% off of my impressions of the mobile game. From my experience, I can see why people enjoy this game, as well as why people get frustrated that it is so successful. Love it or hate it, it’s here, and so is our review.

Even though I haven’t played the PC version, I’m pretty sure this looks almost identical based off of the videos and screenshots I’ve seen. The game world is relatively large, with very distinct areas that you can travel between seamlessly. You’ll encounter plenty of visual variety as you explore all of the areas of the map, and a lot of it is very unique — not simply just a color scheme change or different objects. Of course there are some things that look pretty silly, but that’s pretty much the entire premise of this game; silliness. 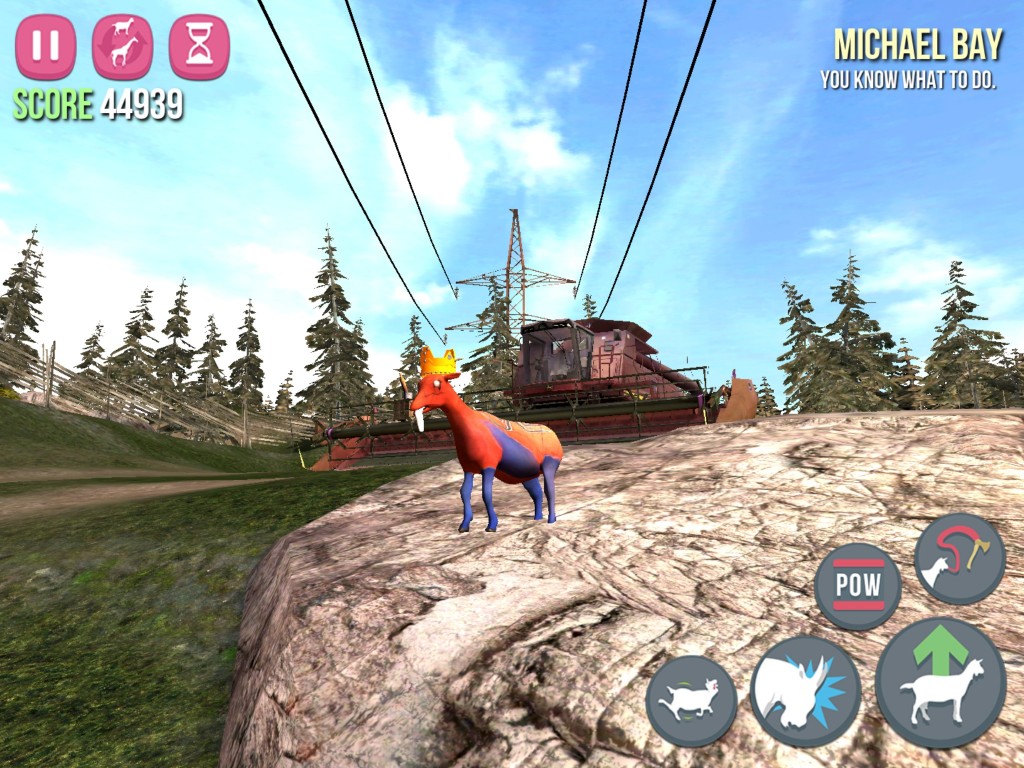 It runs very smooth, even on my iPad 3 (which I’m noticing more and more games that it can’t quite handle), which is a big plus for me. Most of the enjoyment you receive from Goat Simulator is a combination of you pulling off a hilarious chain reaction, and the hilarity comes from both what you see visually, and the means you used to pull it all off. Overall, Goat Simulator has above average graphics, runs smooth, and you’ll get quite a few chuckles out of the things you see in this game.

For those unfamiliar with the concept of Goat Simulator, it is essentially a free roam sandbox style game with no primary goal or story. There are mini “quests” or objectives that you work on completing to rack up points, but ultimately the choice is up to you as far as how you want to play the game. Trying to complete the tasks is fun and all, but the real enjoyment comes from exploring the game world and trying to find funny glitches and pull off a hilarious chain of events.

You have a few different actions you can perform, including a jump, headbutt, and lick. The goat’s tongue can stick to objects and extend for quite the distance, and the lick is definitely a start to a lot of funny situations. Another action you have is based on your goat’s attachment, such as a jetpack (see below). There are a variety of different things you can equip to change up the gameplay, and helps break up the monotony. 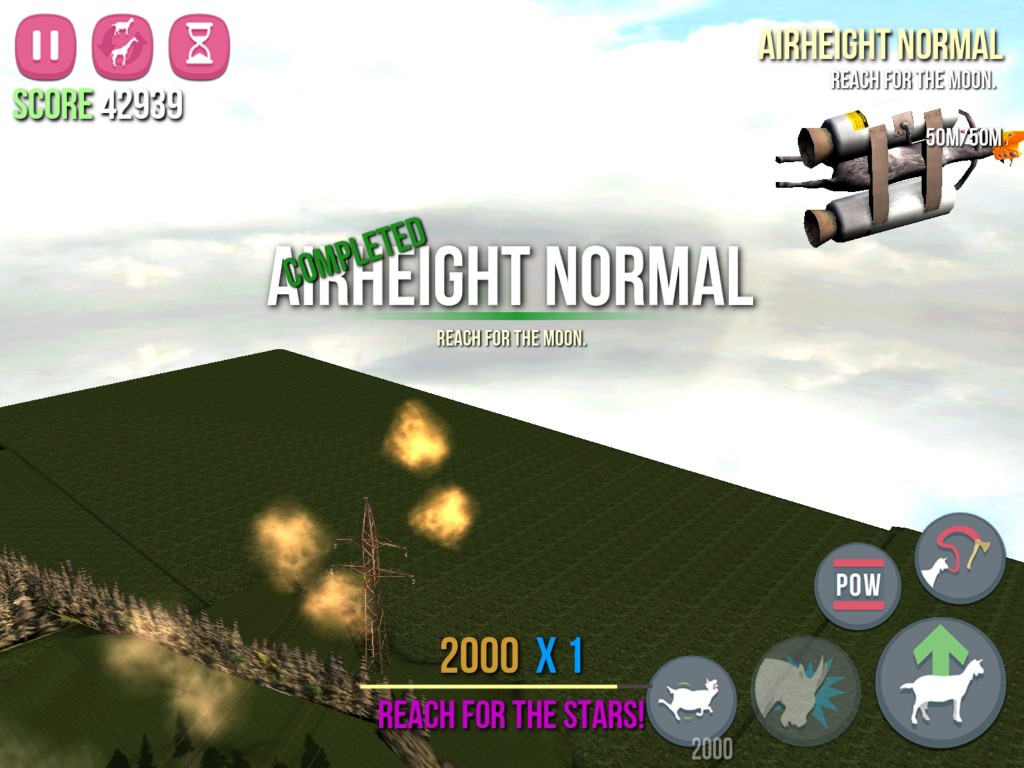 A couple of other mechanics that should be noted, are the slow-mo and rag-doll options. When you switch to rag-doll, your goat is no longer in your control, and will instead just flop around. This really doesn’t do much if you switch to it while standing still, but it can be awesome if you switch to it when you’re shooting way up into the air. Slow-mo is pretty self-explanatory, and goes hand in hand with the rag-doll feature.

There were no apparent Interface woes with the mobile port of Goat Simulator, hence the perfect score. Since there’s hardly any time spent in the menus, there’s really no need to even discuss anything except the in-game UI. You’ve got a handful of buttons on your screen, and each one is plenty big enough to ensure accuracy when tapping, and everything is also very responsive. I don’t recall a single time where the controls felt clunky, or even inconvenient. 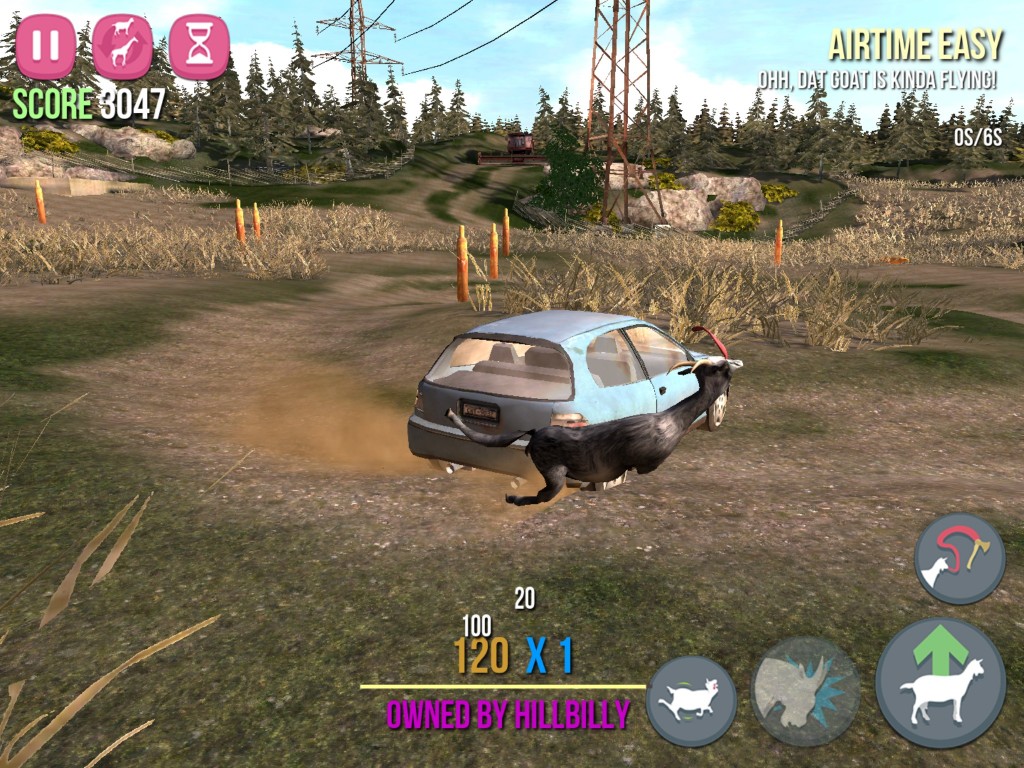 When you take a game that has already seen success on the PC or on a console, and try to port it to mobile, the biggest issue is usually converting the controls — but fortunately Goat Simulator executed this area with perfection.

If there is one area in particular that Goat Simulator struggles with, it is most definitely replay value. Honestly, it takes a certain type of person to really enjoy playing this game for an extended period of time. I can’t see most people opening up their Goat Simulator game on a daily basis, or even a weekly basis for that matter. To me, it’s more of a game that you play every once in a while, and show it to your friends so you can all share a good laugh at it’s ridiculousness.

The problem isn’t that the gameplay gets too boring, or that you’ll get sick of the scenery, but rather the fact that there is nothing to keep you engaged in the game besides the funny moments. Getting a few laughs is great, but given that this game costs $4.99, I’d expect at least a bunch of achievements/unlockables or alternative play areas. Apparently there is some content in the PC version that isn’t available on mobile, so it’s possible we could see content updates in the near future. 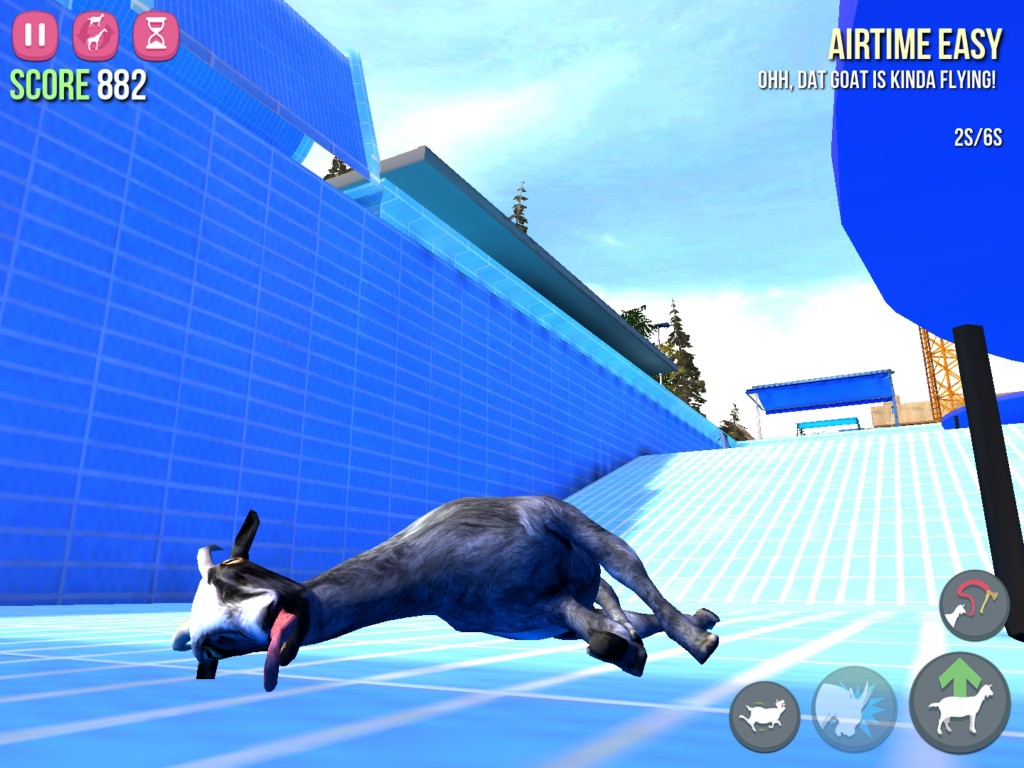 Fortunately, Replay Value is typically a very easy thing to improve upon, and the most common thing to be improved by game updates. Whether it be content that is already available on PC, or mobile specific content — it doesn’t matter to me, it just needs to be there (or the game needs a price-cut). Not saying $5 is a mass amount of money, but compared to other mobile games out there, the vast majority have much more content to offer at that price.

I’ll be the first to admit I was a part of the crowd that thought this and all of those other simulator games were ridiculous, and not worth a dime. However, after playing Goat Simulator for a while, I can see what all the fuss is about. It isn’t my ideal game, but it is actually very well made and entertaining, and works perfectly as a mobile port. Some more content would surely be appreciated, and would help make the price-tag more justified, but for now I’d still recommend it to simulation lovers.

Click here to check out Goat Simulator on the Apple App Store!

Click here to check out Goat Simulator on the Google Play Store!

Have you had a chance to try out the mobile adaptation of Goat Simulator yet? Be sure to let us know what you thought about this game, as well as our review of it, in the comments section below. Also, make sure you share this with your friends via our social media outlets as well!