Groove Coaster first launched on iOS in 2011, and it was a game built from ground up for the mobile platform. At the time, it received stellar reviews and was downloaded millions of times, with several versions of it springing in the freemium market. Four years later, the game crosses the great divide and lands on Android in an extended version with a bandwagon full of perks, and the best part is I don’t know why it’s freemium, but it’s freemium done right.

Groove Coaster has its name for a reason; it’s not just some random gibberish. Groove is for the music and coaster is for the roller coaster because on more than several occasions I felt dizzy when playing it. If you want the short gameplay description – the game has you flying through an abstract vector graphic space tapping to the music.

Now, to explain the details, we will need to clear a few basic notions here – avatar, targets, grades, chains, rating. 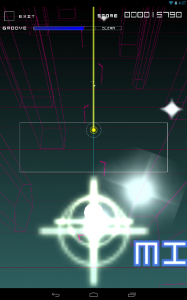 You fly as a neon pixel (the avatar) like a wagon attached to a neon string, or a roller coaster railway, that makes such crazy maneuvers in space with no up and down those of you prone to seasickness might feel the familiar icicles growing in your stomach. All that 4th of July of visuals goes beat to beat with the funky Japanese music.

As you play, you unlock more avatars you can choose in the settings that are conveniently placed before you enter a stage. There are butterflies, stars, pixels, and what not, but I did not expect to see a unicorn avatar!

The neon string has targets placed on it. Some of them may just jump up seconds before you approach them. Once your neon pixel reaches a target, you need to perform a specific action. Each target has its own action that triggers it; once the target is triggered, the game judges the quality of your response. As you might have guessed, the targets are the big and small parts of the music like beat and various effects. In other words, if you suck at rhythm games you might have a few challenges in your way, but if you are a natural born Ringo Starr you are in for a treat. 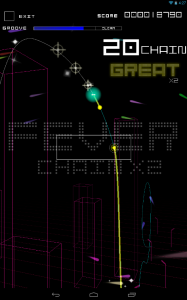 The grades are of four types from Miss and Good to Cool and Great, depending on how good you time your hits. Now, there is a groove bar at the top of the screen, which fills up when you hit good, cool or great, but the missed taps deplete the bar – not entirely, but partially.

To clear a level, you need to fill at least 70 % of the groove bar before the music stops.

Tapping two targets in line makes a chain, and the more targets you hit continuously without missing, the better chain you make. Once you make a 10-target chain, you activate something that’s called Fever. The latter is a special chain count doubler, which is active until you miss, in which case the chain count is reset. 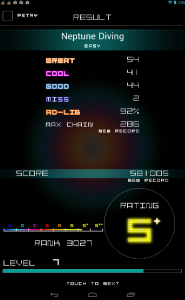 When you clear a stage, the game gives you a rating that goes from E to A and two super high ratings of S+ and S++, which are even cooler that A. Naturally, your performance based on your rating and chain unlock loads of perks that actually influence the gameplay, and let you level up, but also unlock new stages and new music.

Each stage has several difficulty settings from Easy to Normal, Hard to Extra for some songs, and clearing one with a high rating unlocks the other.

Groove Coaster 2 offers two control schemes – touch and… audio. Yes, you heard it right. While the touch system is pretty straightforward, and you tap, swipe, tap and hold, flick, beat, scratch or zigzag on your screen depending on the kind of target comes you way, the audio control system is totally awesome. 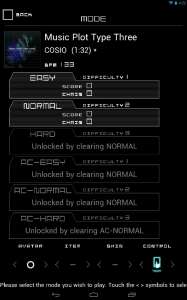 You can switch to it by selecting a microphone icon instead of the screen icon in the control settings. From there, you can make any noise your device’s microphone registers to follow the beat. You can clap your hands, although that is not the best of options. Using a pencil or a metal spoon is more like it, especially if you consider how fast you need to be making the sound.

The two systems have their pros and cons. The touch controls let you score high, but the fact that you need to memorize the gestures may be a bit overwhelming for some musically challenged. The audio controls on the other hand are awesome and fun, but they won’t let you score as high as in the touch mode. 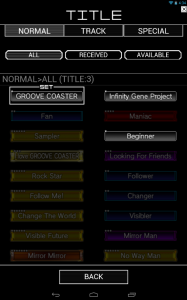 Since we’re talking about a music game, a few words need to be said about the music. There is a great deal of free music you unlock as you play and level up and you won’t feel the shortage of new content even playing for free. If you have played the game on iOS before, you will find all the familiar tracks, some revamped for the new version, but you will most likely want to buy some new packs.

The style is eclectic – some electronic, some funky, some trippy, but the overall feel to it is Japanese. May the music critics forgive me, for my knowledge of the modern Japanese music comes from Kill Bill the movie. Some tracks I utterly dislike, others are totally awesome, so my guess is anyone can find a track that sings best to them.

As far as the paid packs are concerned, there are so many of them you will get lost choosing, and the overall UI with the tracks is a bit complex to sort out.

The somewhat retro vector graphics is amazing, and the game jumps from dark to pastel bright colors with tons of effects that accompany your taps when you time them right. Circles, stars and butterflies burst on screen as a firework, which adds to the overall disorienting feel of the game. Combine that with a constant shift of perspective – sometime you see your avatar from behind, sometimes from the right or left or upfront. The neon railway does all the crazy jumps and zigzags, and when it’s over, the game shows you a cube inside of which the roller coaster was placed.

Overall, I found the design more disorienting than I’d want it to be, but hey that’s part of the challenge.

As I just said, the game doesn’t want to be too easy and while the Easy and Normal modes in each track are quite accessible, they too introduce nice challenges while everything that’s beyond that is space science to me.

The disorienting feeling acquired through the design and shifting perspective is a nice difficulty challenge.

Next up on the difficulty scale is the target variety and the variety of gestures that need to be performed to activate them. The easiest target is a Tap type, which only has you tapping on time. A Hold type is a dot on the line that marks the beginning of a color-coded line, which is also marked with an end – you need to tap, hold and release. Then there are targets that have you swiping to the left or right, or tapping rapidly while the diamonds are coming, or rubbing the screen as fast as you can until the target ends. All that action has to be performed very fast. 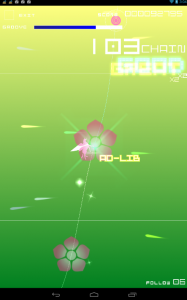 Then there is something that’s called AD-LIB and it’s invisible. You can’t see them, but you can hear them, if you’re good at music. That is, you are supposed to be able to hear them, in theory. I have tried and I’ve caught some, which is a very rewarding feeling. At the same time, I’ve also tried tapping as crazy without trying to match the targets in the Easy mode, and that’s when I scored the highest. This does not work in Normal and above modes because they introduce more complex gestures, including the two-finger ones, which I hate because it’s no longer a one-tap or one-finger game anymore.

AD-LIBs, when hit successfully, are displayed next to your avatar and you get bonus points. If you’ve been wondering how to get a Full Chain, you must hit all the targets plus the invisible AD-LIBs. If you hit the visible targets, but miss some or all of AD-LIBs you make a No Miss chain.

Thankfully, if you hit wherever there’s no target, you don’t get punished and your score does not get depleted.

Overall, the difficulty choices are great and the ascending challenge is perfect for the players of all skill levels – from the beginner to the pro DJ. 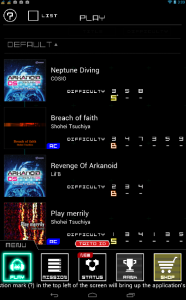 You unlock avatars, power-ups, skins and new stages with new music tracks. We talked about the avatars in the gameplay section.

Power-ups are numerous and you need to choose them before each stage to use them – you can choose only one booster per stage. For example, a Follow item converts Miss into Good ten times per stage; Visible item makes AD-LIBs visible, and many more.

Skin stand for the visual effects that pop up when you hit a target successfully. They’re wonderful by default but as you play you unlock more skins, so trying those out adds even more visual variety to the gameplay. 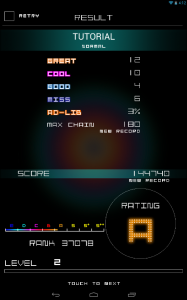 The game’s IAPs are non-intrusive. In fact, you will have to look for them if you are determined to spend some money on the game. They come in a variety of standalone items and packs, from a $0.99 bird avatar to Mega Hit Pack for $4. The music packs come for $5 each, containing loads of tracks.

Overall, the system of the unlockable free content is so well put together you won’t feel bored or pressed to pay for more gameplay variety.

Groove Coaster boasts of an excellent replay value, with new tracks and skins and avatars getting unlocked whenever a player levels up. Considering the variety of difficulty modes per each track, and the ratings, you might want to excel in each one of them, for scoring high unlocks even more content. 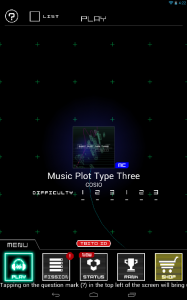 I have not experienced any performance issues. It should be noted the game plays offline, but if you choose to play a new track you haven’t played before you will need the Internet connection to download it once.

A psychedelic experience, Groove Coaster 2 is one of the best music games on mobile. Offering a great replay value, visual and audio variety, a decent difficulty challenge and quite a good deal of unlockable content, I am pretty surprised why it’s even free-to-play. In other words, it’s an audio-visual mobile game done right, and 4 years after its first release on iOS, its Android version is as relevant as ever, with all the added content and features. Get it.

In the meantime, watch this player make a super-long chain – is he/she some Edward the Scissors man with a hundred fingers on two hands?