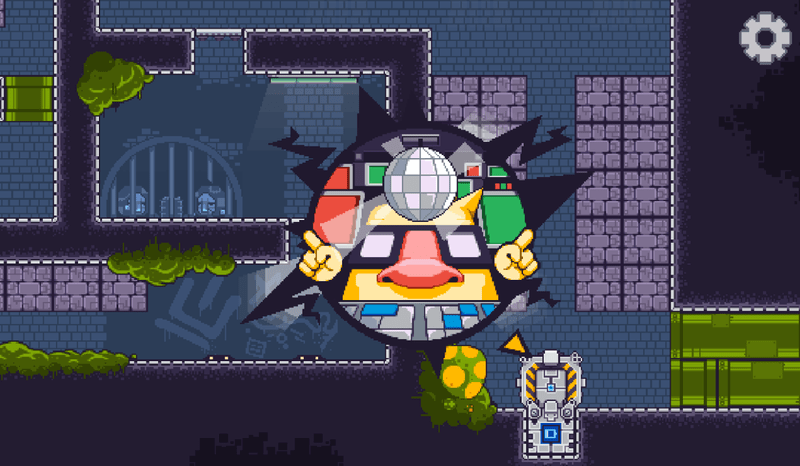 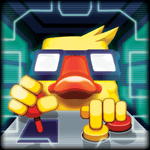 Gunbrick is one of the January releases of Nitrome, and without a doubt – a candidate for the best games of 2015 list. A very smart puzzler at heart, it mixes the most mind-bending genre with a little bit of arcade action on periphery, and a beautiful retro pixel style on the background. Before you even read on, there is barely one or two Cons, and the ultimate conclusion is – get it if you like puzzlers.

I have spent a few days with Gunbrick, and I still wonder what the heck it is. At the beginning of the game, there is a short cut scene that shows you a guy ordering a brick online, then gets it delivered and jumps in – the game begins.

The guy himself looks like a duck, with yellow face and a big red nose. It could as well be some sort of humanoid on a far away planet, or a parallel dimension, where humans evolved differently and invented gunbricks instead of wheels.

The latter could be the case because they use gunbricks to move around, and the entire city infrastructure is designed for the convenience of the said gunbricks. 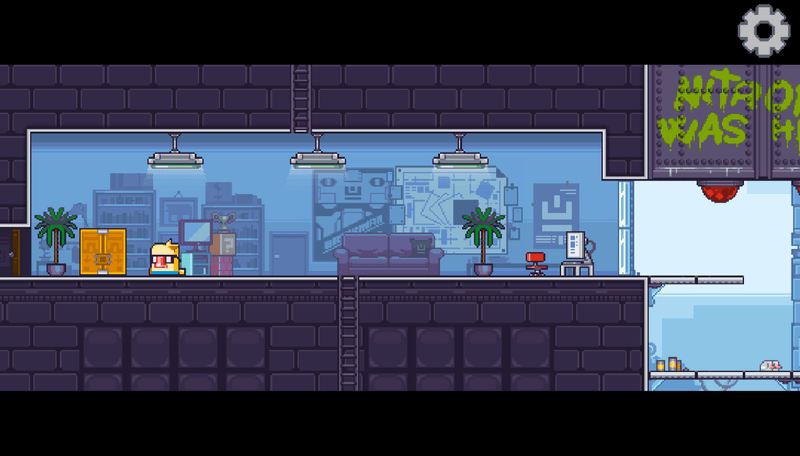 So, the duck-dude jumps into the gunbrick that is a rock-hard, stone-heavy, and surprisingly maneuverable cube. You move it left or right by swiping correspondingly.

In its default position, the cube has a shield on its upper surface, and a gun on its bottom surface. While the functions of the shield are obvious (occasionally, you will be shot at), the gun serves two purposes – shoot and move. If you move to position the gun facing ground and shoot, the gunbrick will pop up and sort of float. As a result, a few shots to the ground let you get on higher platforms.

Notably, if there is platform right above your gunbrick, you can float above it without hitting your “head” on its bottom. No, you mysteriously fly higher than the platform and land right on it. This little trick definitely defies physics and any known architecture, and may be not quite obvious to figure out at first, but once you try it, you know the trick.

Speaking about defying geometry, gunbrick can rotate around itself in narrow passageways that should not be letting it stand on its angle. Well, it does not really matter since it doesn’t spoil the great feeling of satisfaction when you beat the puzzles.

The second movement-wise thing you can do with a gun is point it sideways and shoot. The rocket launches and the backfire hit pushes the gunbrick one square the opposite direction. Oftentimes, that one square is all you need to get the cube in the right position, so you will often use that mechanic. 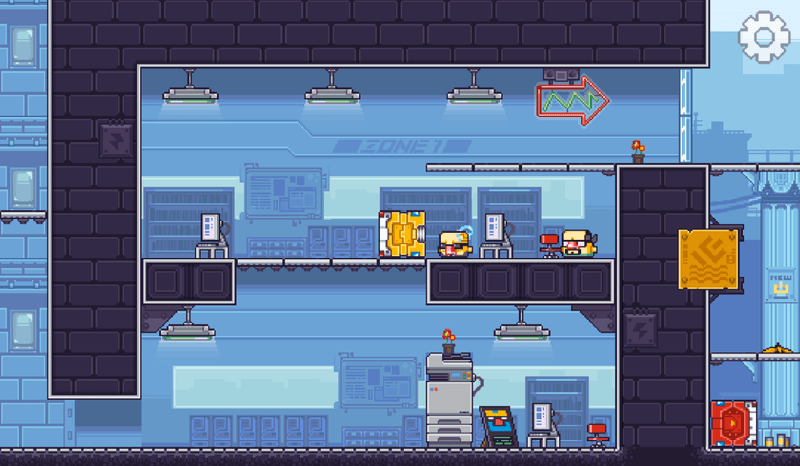 The controls are quite simple – swipe to move left and right; tap to fire a rocket. As simplified and intuitive they are, the absence of a virtual joystick, in which Nitrome take pride obviously, is not always a good thing, and here is why. Sometimes, an accidental tap means you’re moved where you had no intention to move, and end up falling, and having to start over again.

That said, I did not experience a lot of these frustrating moments, and the game registers your swipes and taps correctly. On the flip side, there are users asking for a visible joystick. Also, I found it more convenient to play Gunbrick on a large-screen Android emulator with mouse instead of touch controls – that way, mis-taps were eliminated altogether. 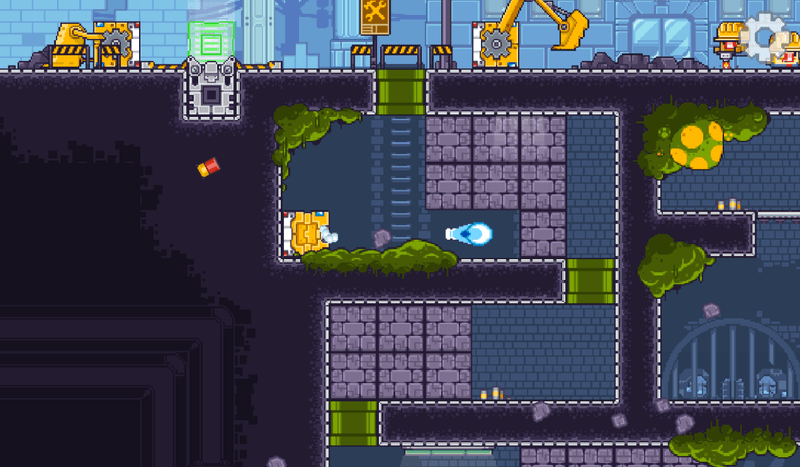 Gunbrick’s puzzles are divided into standalone levels with boss challenges and checkpoints, Each subsequent challenge can only be unlocked if you beat the previous one, and they increase in difficulty.

The difficulty is a delight – the initial levels are basically an introduction while some time after level five preschoolers will demand parental assistance or give up. This is where grown-up gamers start feeling the challenge to their gray cells.

Each puzzle is unique and brings something to the table mechanic-wise. It is not impossibly hard, but hard enough to want to beat all the levels. 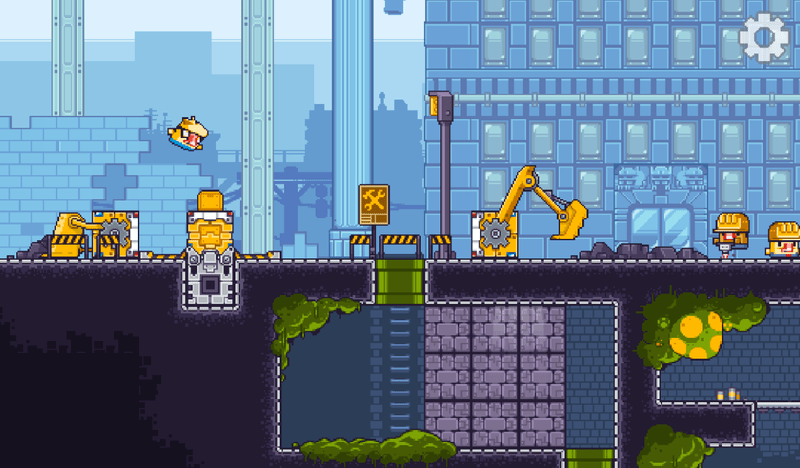 The game features 32 unique levels in three worlds, and it is hard to say how much time it will take you to beat the game completely. It all depends on just how much free time you have on your hands. Personally, it will take me no less than a month because I am a snail and like to linger. On the flip side, I read a user claiming they beat the entire game in three days with heavy gaming.

Once you clear the levels, that is basically the end. Nitrome promise they will be releasing regular updates with more levels, so if you need to free some storage real estate to try new games, make sure you save your progress in the cloud to be able to download it again when new levels are released (haven’t saved mine, yet, and don’t see cloud support in the description, but am sure it’s there).

With the complexity of the levels, where each square serves a purpose, and even when you’re cornered you can back out and try a different approach, there is no way anyone can wish for an element of procedurally generated levels. So, what you see is what you get – 32 mind-wrecking levels for now. I doubt you would want to replay them, unless the very hard ones.

Also, there seems to be no leaderboards, or any competitive element like beating your friend’s score, or completing the levels faster. All that, in my humble opinion, does not amount to anything that would make me downgrade the game. 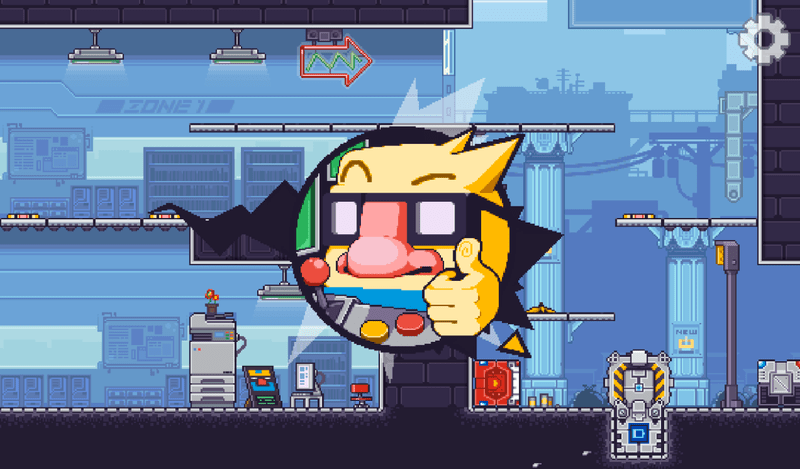 Pixel style is not the past – it’s the elephant in the room of the present, so I suggest we stop referring to it as retro. Too many a game sport this fancy outfit and wear their colors boldly and in a very modern manner. Pixel style is no longer 8 or 16-bit, with a rare exception, and developers continuously add new gloss to the classic cover. The amount of retro games on mobile increases because users like these games, and they play well on small screens, so 2015 should see an increase.

Gunbrick looks fabulous and there aren’t tiny objects that you squeeze to make out what the dang they are. The color scheme is nice; the character and the items are silly, but good-looking, and you will let an occasional giggle pass as you play. 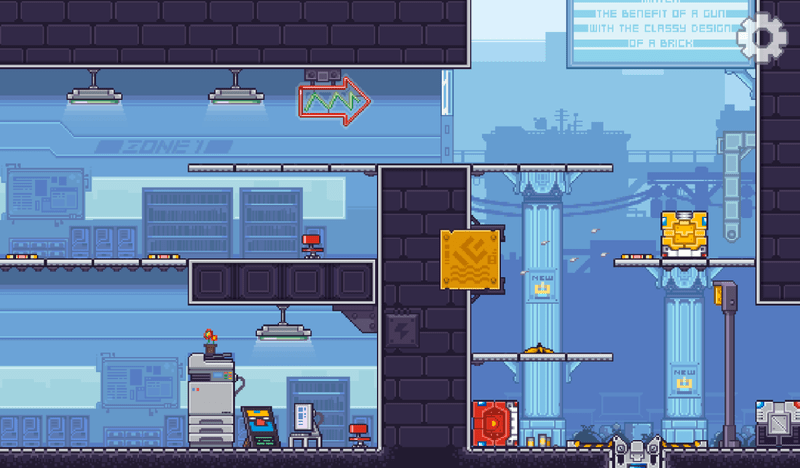 If there is one thing that I disliked about the game, it’s the music I instantly muted. You may have a different opinion, and I am not downgrading the game because its soundtrack gives me a headache. On the contrary, I like the fact that Nitrome lets your own music run in the background – something, for which many developers don’t go the extra mile.

Network connection (probably for the updates, but you don’t need Internet to play)

It is a huge surprise a game does not want to have access to your everything, and for that alone, I applaud Nitrome.

I have not experienced any lags so far, and judging by the fact there are no complaints on the app stores the game runs smoothly.

One word of warning for the parents, though – Gunbrick is nuts. It crushes bystanders and pigeons! They shed no blood, though, but make an easily distinguishable pop sound when it lands its cement coffin-like body on the birds and construction workers that seem to have a death wish and won’t move out of its way. It is not a big deal, but my youngest niece said it’s a mean game (she’s 4 and wants be a vet, so pigeons are really out of place here). 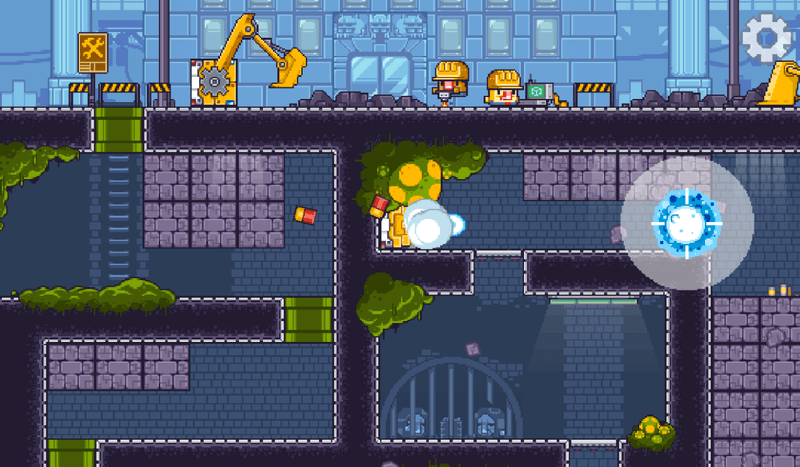 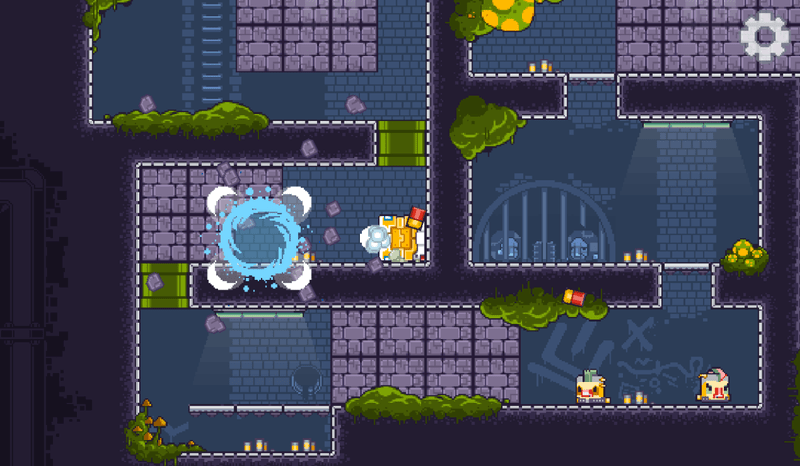 Gunbrick is a fresh, innovative and challenging puzzle platformer, and one of the best cross-platform releases this month. Its story may be odd and irrelevant, but its puzzles are smart and the visuals are both silly and good-looking. All things considered, it’s a success. Get it.