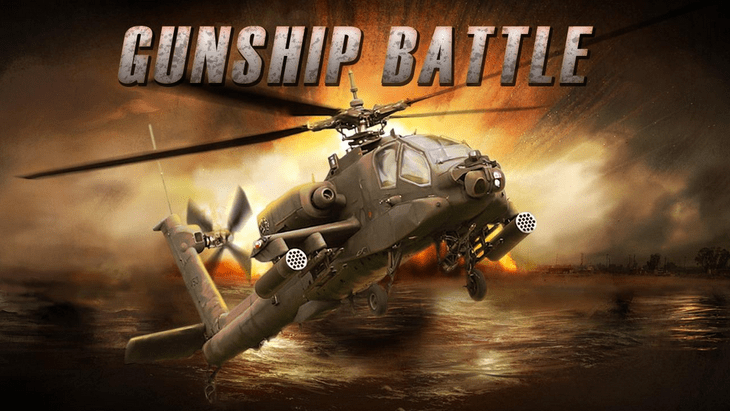 GUNSHIP BATTLE is a hot pick on Google Play these days with more than 70.000 downloads and an average rating of 4.3. It’s quite a superb title by TheOne Games, a newcomer to the market; and here is a sincere overview of the game’s virtues and flaws.

GUNSHIP BATTLE takes you to the world’s most dangerous war zones where you fight as ‘a good guy.’ Even though it is not immediately clear whether you’re a NATO, UN or any other ‘peace-maker,’ but the number of war settings suggests you’re most probably an American pilot covering your troopers and clearing out enemy positions.

The game features 3D graphics worth to be praised, while the hangar full of gorgeous combat birds will keep you salivating as you pile up the coins to buy a more advanced chopper. 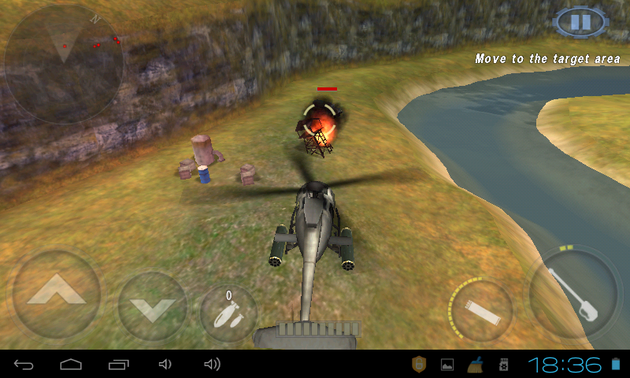 The game offers an episode mode that is compiled of missions based on real war scenes from all over the world. Once you are done with an episode, you can get to the next level of difficulty or dive into a customized mission. Will the enemy fight back? Oh, yes, you will find yourself in the midst of intense enemy crossfire, so you’d better learn how to control that bird before it gets fried.

At the entry levels, the enemy units are static, while the more you advance, the more complex get their formations, and they start moving around. The real fun begins when your enemy forces include choppers that are definitely savvier than you and know their way around the site.

You enter your username so the game can save your progress on its server, so you never have to lose progress and continue where you left off the previous time. 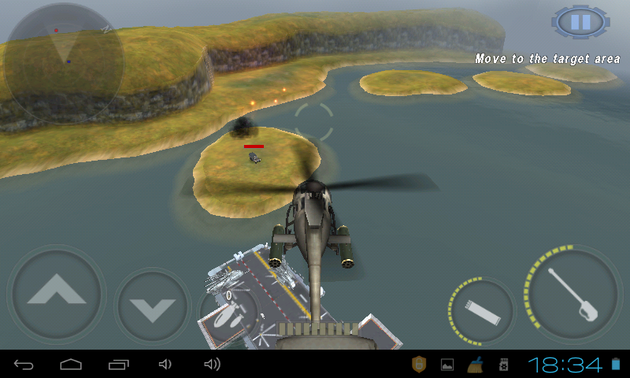 3D graphics is very well implemented here, my compliments to the developers. The choppers are a delight, and once you get to the workshop, I’d call it hangar, you get amazed at the fine selection of the world’s most powerful and most advanced helicopters of all nations.

The settings are drawn fine, but quite basically – you get the sea, the shore and some grass, with the enemy forces scattered around in your near radius. You have a radar to navigate, but the landscape itself is not too informative to help you get around in the air. It gets increasingly difficult to navigate if you happen to ascend too high and everything you can see is the infinite blue of the same-pattern sky. Here is when you want the altitude button.

For some reason, as I tapped ‘install’ and the game started downloading, I recalled Wagner’s ‘Flight of the Valkyries,’ so there was no surprise when I heard a familiar tune. It fits the game pretty well, indeed. The combat sounds are nicely implemented, and complement the gameplay without distracting you from the mission, but not help, either. What I mean is often you hear the explosion sound after you have a visual confirmation that you hit the target. Even more often, you see the confirmation on screen where you see the targets count, and only then you get the visual and audio effects. A little lag here. 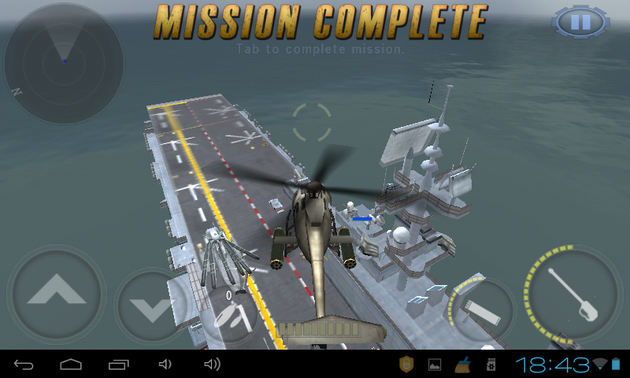 Right from the start, the worst part about this game is controls. Even though games that rightfully implement tilt control to the game’s advantage are scarce, I honestly give each new game a chance to persuade me this is a legitimate control option. Nevertheless, GUNSHIP BATTLE fails to introduce tilt control that would make the game a delight rather than a gamer’s misery.

It is really difficult to control your chopper; it is even harder to aim; there doesn’t seem to be a way to control height, or land the chopper. Often, you are flopping around yourself trying to figure out how to drop some altitude, and if you decide to make a circle around the scene and try to aim from a different angle, you stumble upon a digital wall that won’t let you finish the maneuver (just like a wall in the Hunger Games’ arena).

While the first four or five missions are easy, and you can survive and accomplish them with the hectic controls, the tougher it gets in the missions, the more aggravating gets the gameplay. 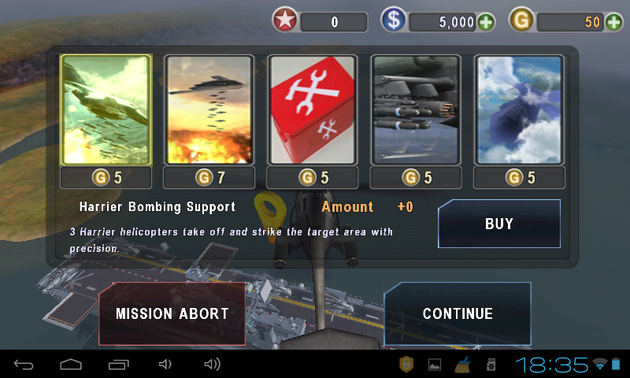 Each chopper comes with its own ammo, and you can upgrade it, of course. The one item that works for me is the guns, and provided I could aim successfully, sooner or later my target would give in to the rain of flashing bullets. The missiles turned out rather useless since you never know how to aim them; even though your target is in the aiming, the missiles fly higher, or sideways, taking their own tricky trajectory. I believe there’s a trick or two you could learn to aim the missiles better, and the developers are very welcome to share them.

Now, if you take a look at the selection of choppers, you will see that each comes at a price, and while some of them can be bought for the currency you earn as you accomplish the missions, the coolest ones are so expensive you will need to spend real cash to buy them. 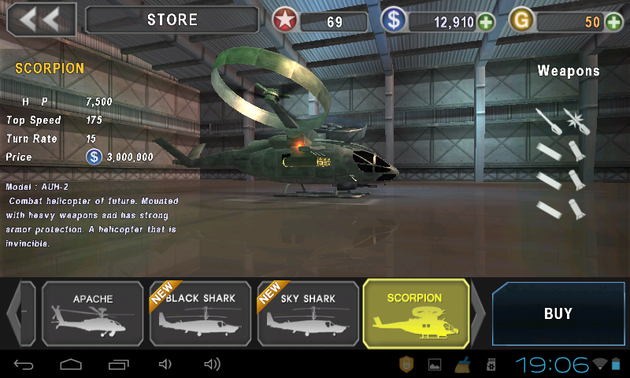 The G currency you get as you install the game can be spent on choppers, but further on it does not get replenished as you complete the missions; you can only buy it for real money. I wouldn’t say in-app purchases are intrusive; I would say the game offers a way to play for free up until a certain level, after which you’ll have to buy if you want to advance. Also, 3 million G for a helicopter seems too unreal to be able to earn without buying. 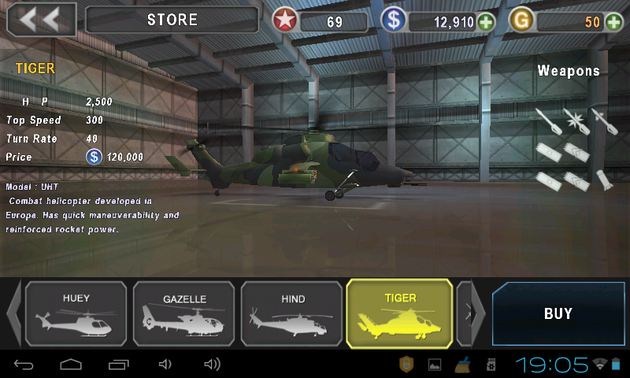 Gunship Battle: Helicopter 3D is without a doubt fun and engrossing flying shooter with good graphics and sounds. Considering it’s free, the title is one of the best new chopper-based action games available, and we certainly recommend it. However, it needs some improvements in the controls’ department, and a more gamer-friendly way to earn G currency – the lazy folks will buy via in-app purchases to get the helicopters faster, but those who play diligently would feel a lot more rewarded and accomplished if they could earn the G money. Also, it seems a bit odd you have to pay for the ammo – it just doesn’t feel right a pilot has to pay for the guns and bombs after each mission.

You can very well enjoy at least ten increasingly challenging levels before you have to cash out real money if you want to advance. If you love shooters and are a military-style action aficionado, Gunship Battle may just be your cup of tea.