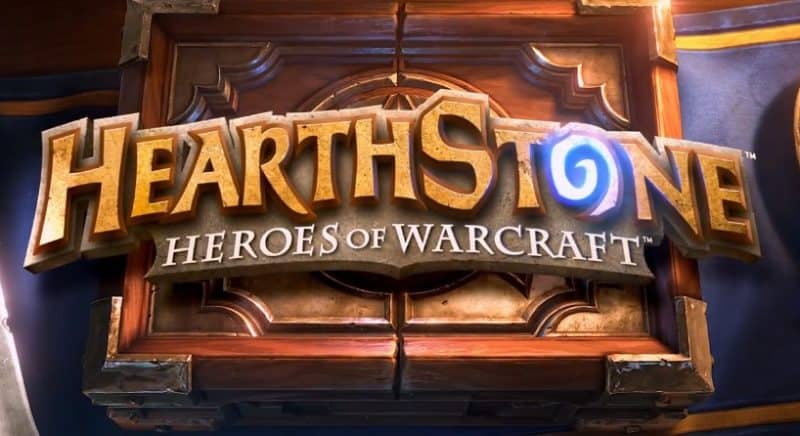 Blizzard Entertainment has made their first major move into the mobile gaming industry, with the release of Hearthstone: Heroes of Warcraft for the iPad. For those who are limited to Android, or just have an iPhone and not an iPad, there is supposed to be a version coming soon that will be compatible with those devices. The game can be downloaded for free from the app store, and there are some in-game purchases available — but it is not at all required to play the game to it’s fullest extent.

If you’re expecting a mobile version of WoW, you’ll be a bit disappointed to find out that Hearthstone is actually a card game. However, if you’re like me and you actually enjoy CCGs (Collectible Card Games), you might really enjoy Hearthstone.

This game was originally released for PC, and the mobile version is pretty much an exact replica of the PC version, but you’re playing on a smaller screen. While playing on an iPad3, I didn’t notice any major graphical issues, and the frame rate was pretty steady throughout (although there were some dips when I was playing the game with other apps running in the background). Most importantly, you’re able to read everything clearly — even the cards in your hand, and if you wan’t a closer look you can always tap the card to pull it out. 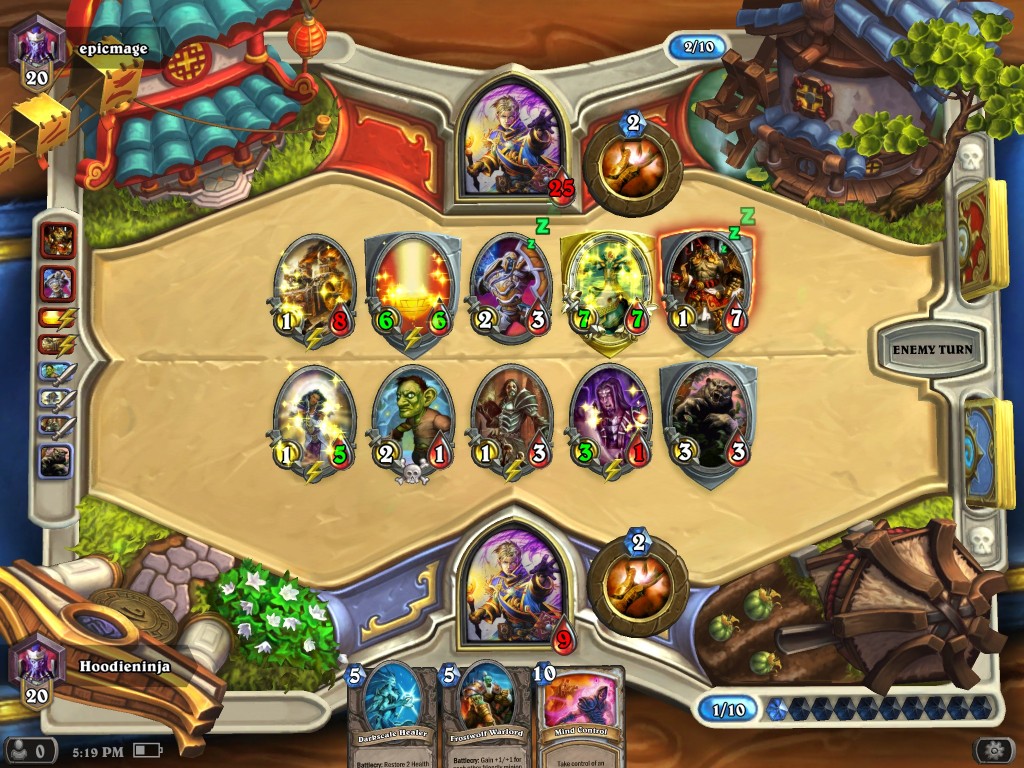 Card animations look awesome, and it makes crushing your opponents feel even better when their character plate cracks and falls apart. With that being said, there are still a few minor hiccups that prevent this game from having flawless visuals. Sometimes cards in your opponents hand will get stuck looking as if they are selected, which may even be lag-related, but it doesn’t really affect the gameplay like it does the visual aspects of the game. There are other very minor bugs, and I’m sure the developers will get them patched up relatively soon.

Hearthstone: Heroes of Warcraft, brings card game intensity to a whole new level. The main elements of the game are each player’s hero (which are all classes from WoW), each hero has a unique hero power that can be used at the cost of 2 mana, and doesn’t use a card. Mana is used to play cards and use hero powers — each player starts with 1 mana crystal, and gains one per turn until they reach 10, which is the maximum. Each card has a different mana cost, which can be anything from 0 – 10, however the only restriction on the number of cards you can play in a turn is the amount of mana crystals you have, or if you have too many cards on the table.

Each card has HP and attack, and these determine how well they do in combat. If a card with 2 attack and 5 HP attacks another card with 5 attack and 5 HP, the attacking card would be destroyed, and leave the other card with 5 attack and 3 HP. Heroes have 30 HP, and you can use your cards to attack the opposing hero, just as long as your opponent has no cards on the table with taunt — in which case you’d be forced to destroy those first. There are other aspects as well, such as ability cards, healing, etc, but all of these things form a fantastic card game that is a lot of fun to play. 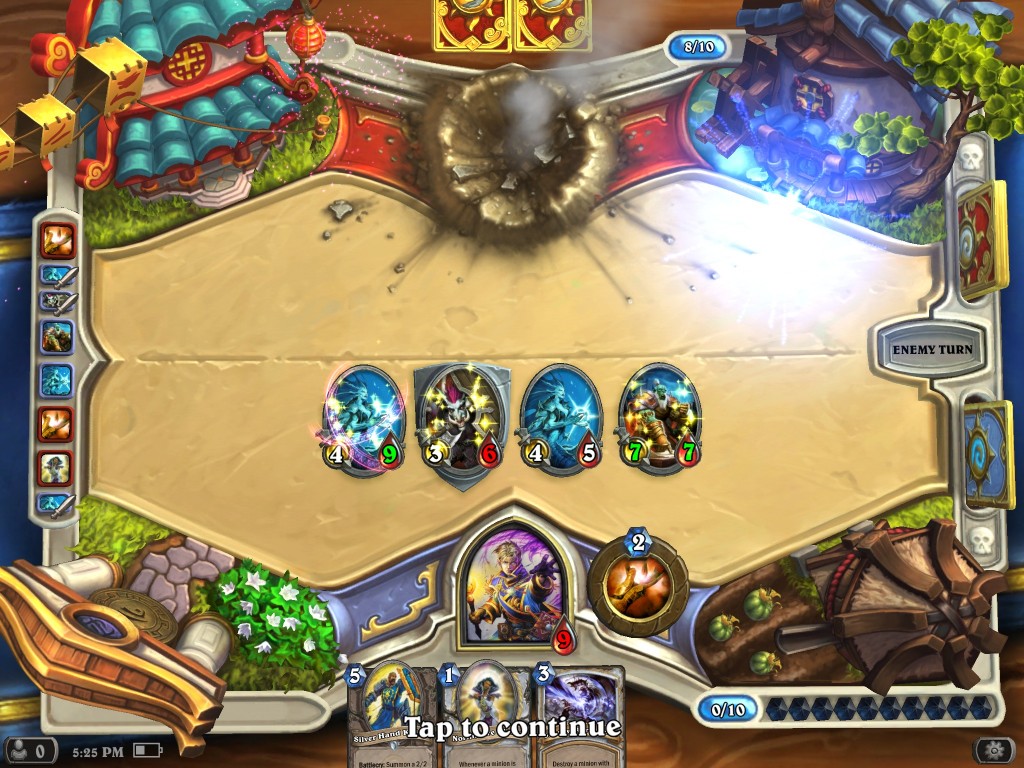 Although the game can seem quite luck based, since you’re really hoping for the right cards at the right time, there is still plenty of things you can do to shape your luck by building a solid deck. Even though you can’t choose the order in which you receive your cards, it’s still a tremendous help to have an appropriate variety of card types/mana costs. This is just another part of why the game is so much fun, the deck building process really lets you play the game you want to play it.

I touched on how easy everything was to see back in the Visuals section, but that also does coincide with how accessible everything is — even on a PC game that was adapted into an iPad version. When I heard about the mobile release, I didn’t think it would be hard to play, but certain things like the deck builder had me worried. However, I haven’t had any problems navigating through the game’s interface and menus, it’s just as easy as doing everything on the PC — if not easier since you can just tap things.

To be honest, I’m a bit worried for the smartphone release, as things could get a bit more challenging when you want to play on an even smaller screen. Time will tell, and I’d be surprised if Blizzard didn’t come up with a good solution to ensure the experience isn’t ruined.

As fun as Hearthstone is, it’s really hard to play a card game for hours and hours, at least for someone like me. I know there are some more hardcore players out there who definitely could play this for extended periods of time, but it seems to be lacking a real draw to keep you coming back other than the fact it’s a really well put together game. Sure, you have the daily quests and the whole ladder climbing – combine that with the gold you make to enter Arenas, it might get you hooked-up for a whole day. I guess what I’m trying to say is the replay value depends on your tastes but still, we give a 4.5. 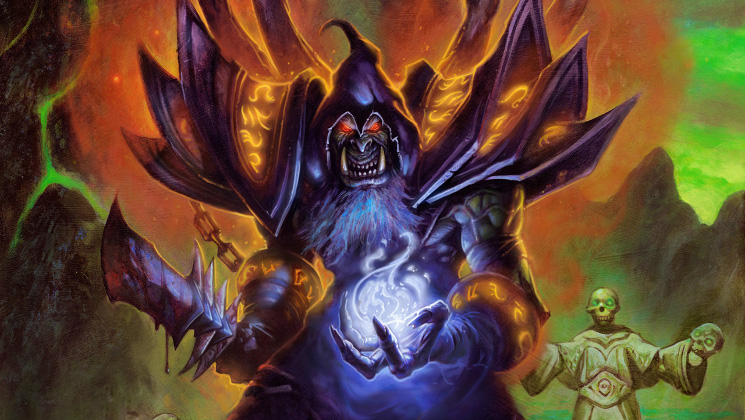 Coins can be used to unlock new cards, and that’s about it. I’d like to see some hero skins that players are able to unlock, or maybe even different types of mana crystals — just something that allows you to show off after putting hours and hours into the game. One thing that you can also spend your coins on is the Arena Mode, which is actually a very major part of the game that differs from the normal mode where players use their own pre-built decks. With Arena Mode, you actually do a “pick one of three random cards” for each of your cards, and you’ll use this deck in the Arena until you’ve lost with it three times. Having another game mode really helps break up the monotony, and I’m glad that it was included.

Hearthstone: Heroes of Warcraft has all of the elements I love to see in a mobile game, everything from a well-working Interface, a balanced multiplayer gameplay, and it’s all based off of the biggest MMORPG of all-time — which ensures a huge following.

Click here to check out Hearthstone: Heroes of Warcraft on the Apple App Store.

You can’t really go wrong downloading Hearthstone, it’s free, fun, and has the potential to be one of the most popular mobile games of all-time. Obviously if you hate the concept of playing a card game over and over again, there’s nothing here for you, but all the same I’d encourage you to give it a shot.