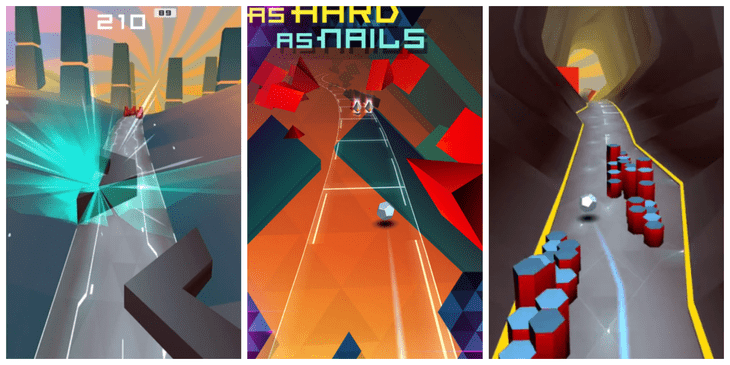 Yesterday, I included HEX 99 on our list of new awesome games and there was no escape for me since then. Player, beware – this game is a super-massive black hole, and once you dive in, chances are you will resurface hours later. That will happen to those who can’t measure their gameplay sessions, for HEX 99 is plain awesome. Let us see why. 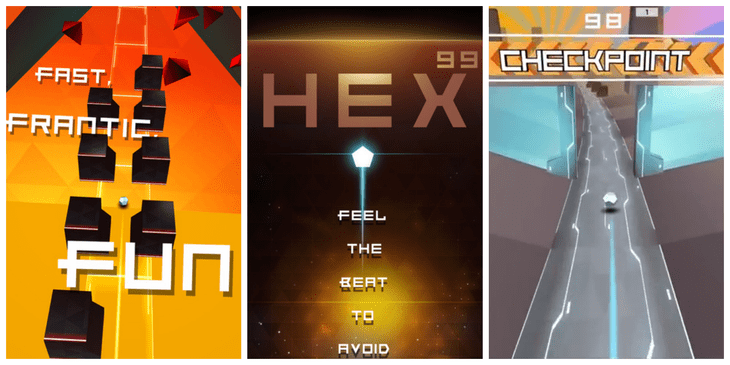 You control a steel hexagonal ball, which rushes along an uneven hi-tech highway. Naturally, the speed is neck-breaking and the highway is stuffed with traps and obstacles as a hedgehog is stuffed with spikes. This sounds like many other games in the niche – for example, Unpossible. HEX 99 does resemble Unpossible in a way, but only in the superficial idea.

The hexagonal ball starts moving once you tap the screen, and from there, there are only two ways you can control it. First is by simply holding your finger some place below, or above, the ball itself so that you see the incoming obstacles. Second is by tapping on the left, right or center areas of the screen to have the ball change its direction. It is very sensitive, but it is also a viable control option.

Unfortunately, there is no other control option, or no way to calibrate the existing one. Support for external control, tilt and visible joystick buttons would add a lot more value to the controls systems itself, and the overall game.

As far as my woes are concerned, lack of controls options is the only thing I can think of to complain. The rest is top-notch. 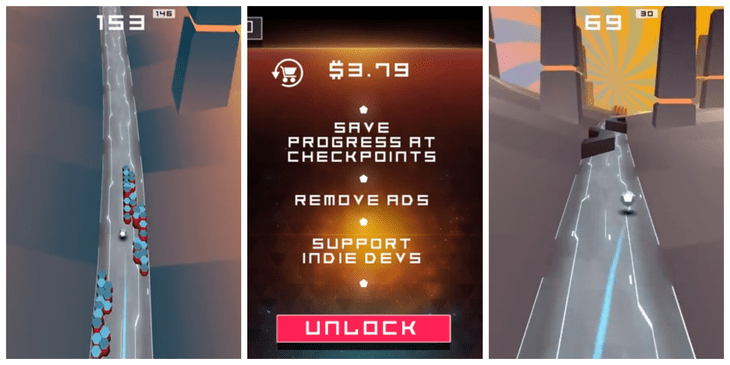 You can turn on or off music and special sound effects, like the female voice marking checkpoints, encouraging you from time to time and wow-ing at your speed and accomplishments.

I loved the music, especially the eerie Christmas tune that just landed as a special season update – there is something creepy about it, almost Saw-like.

Design is the first thing that will catch your eye if you happen to spot the game on the apps market. The high-tech style performed in vibrant, juicy colors with that classy neon glam that gives a special shine to every background and every element make it a dazzling spectacle. Tender Monument Valley-like purple changes into an Android Lollipop-like yellow and blue popsicle, and further into the orange and red, if you make it that far, of course. 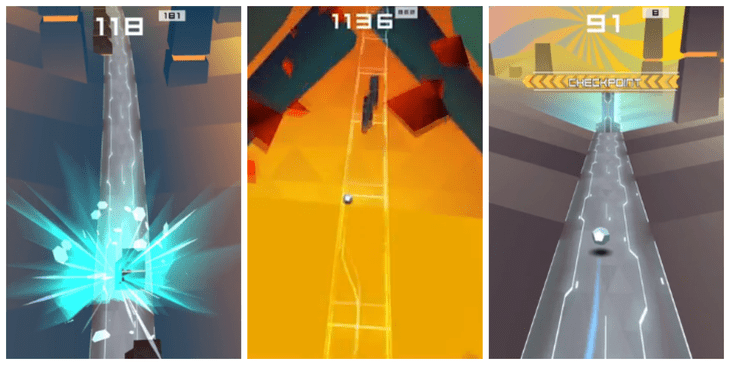 However, when those visuals move at an increasingly high speed, sometimes they blur into a psychedelic trip-hop. The imagery combined with music will either put you in the state of Zen, and you will be able to take each new failure as a Buddhist lama, or on the contrary, wake your inner beast and make you bite your lips and swear, until you start perspiring and weeping, or shaking that tablet. So, bear that effect in mind when you start playing.

Be prepared to never let your focus drift. Just when you think the zig-zaggy V’s are the worst, Hex sends shooting rockets your way, and those are really tough to pass by on a narrow speedway.

The best tactics is to never think at all, but move with the flow and follow your instincts. And it is well worth trying, for each new checkpoint unlocks levels of amazing beauty. 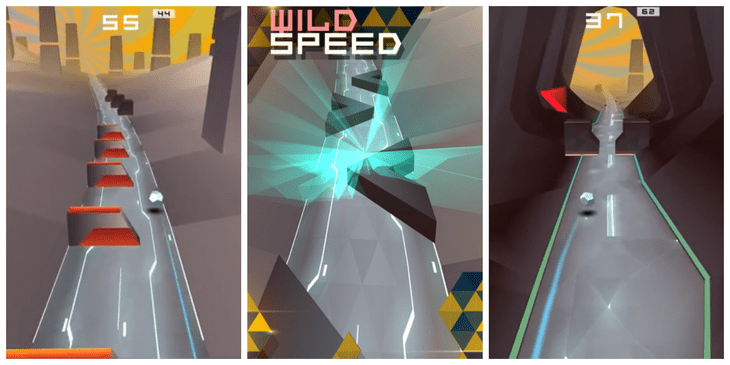 The game is free, and you can play it as much as you like – no restrictions and energy points. One-time purchase, right now it’s $2.99, will clear the ads and unlock the ability to save checkpoints. As Master Yoda would say, “save the checkpoints want you will.” Otherwise, you are doomed to repeat the same route again and again.

I can’t say HEX 99 is impossible because I want to believe there are people, somewhere out there, who are capable of beating the game. The description says only about 3% of gamers make it to the finish line, and that, I believe, are those who buy the chance to save the checkpoints. Without saved checkpoints, it is virtually impossible to pass through Checkpoint 4. At least, I wasn’t able to find any gameplay video on YouTube of some indigo kid boasting any impressive progress. 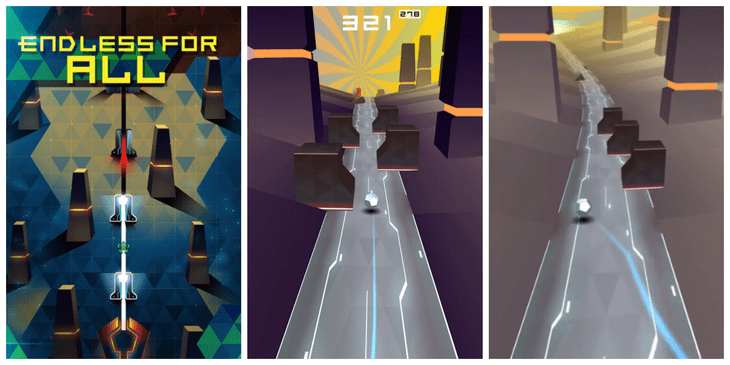 To give the developers due credit, they created a game with huge replay value. The obstacles, or rather their sequence and locations, are never the same on the same levels, so each time you restart, it’s a different challenge.

On the other hand, the music is always the same, at least on the initial levels, where I currently struggle with my dormant instincts. So, at some point I felt the Christmas tune, as eerie and cool as it sounds under the circumstances, became a bit of a nag, so I turned it off. More audio variety would be very welcome, though, since I like my reflex games with nice electronic music. 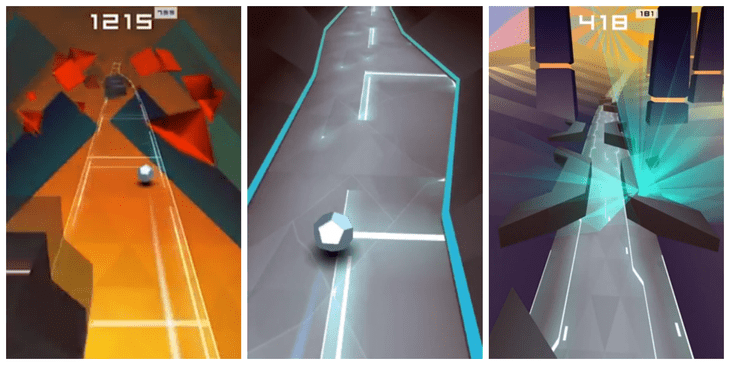 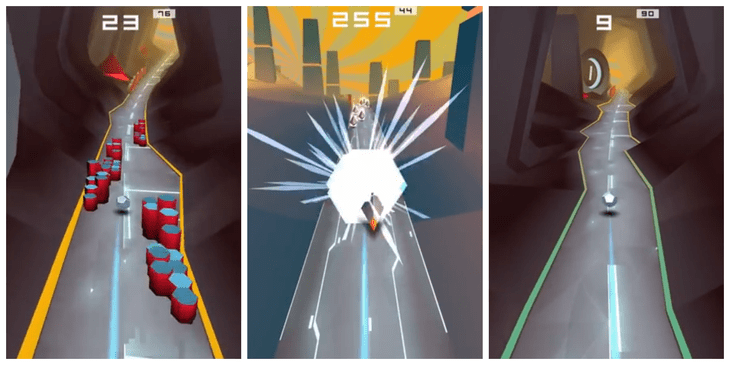 It is a pleasure to see indie games of this quality emerge on the market. In my modest opinion, HEX: 99 is at par with Unpossible, Super Hexagon, Doppler or Smash Hit. It is an aesthetic delight to your senses and a blatant challenge to your reflexes – don’t think, let go and follow your instincts. More control options and a few soundtracks more playing in a random order would add more chic to the already present excellent replay value. If you appreciate a hard challenge in your twitch games, HEX 99 is your next favorite pastime.