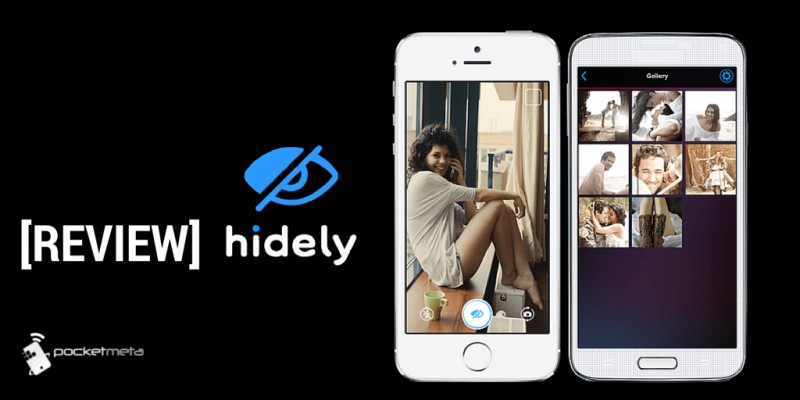 Sharing content from smartphones is something almost everyone does and I’m pretty sure the most frequently shared files are photos. Sometimes you might want to share photos in a secure, private way,  and there are plenty of apps that let you do that. If you want to keep photos private from the moment you take them, you’re not getting as many options.

This is where Hidely comes into play. The app promises to encrypt your photos right from creation, so there’s no risk for them ending up on your social networks and cloud servers. Also, even someone that gains physical access to your phone won’t be able to see them (unless he has your password of course, but that’s another story entirely).

Because Hidely’s purpose is in fact quite simple, so is the app’s interface. At first use, Hidely will require you to setup a passcode and you’ll have to be very careful when you choose it. If it’s too short, or too simple, the app is not going to let you use it. Make sure it’s a strong passcode, but also one that you can remember since for security reasons, it cannot be recovered. iOS users also have the option to access the gallery using TouchID instead of the passcode. 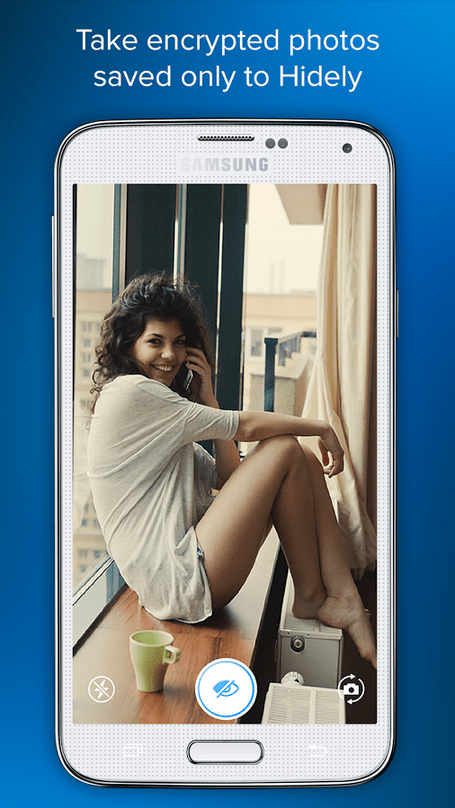 Once you’ve entered a passcode, the app takes you straight to the built-in camera so you can grab encrypted photos immediately. Swipe left and you can access the app’s photo gallery. That’s it. Now you know what I meant when I said the UI is incredibly simple.

The dark color scheme goes easy on the eyes, but there are no customization options for the layout such as themes and other background colors. The gallery could sure use at least one more view mode, for those who’d like to see the image thumbnails as a list, along with the date when the pictures were taken.

Zero Trace Camera lets you take photos with Hidely and encrypts them automatically. These photos will not show up in your device’s camera roll,  instead they are stored in the app’s own gallery which can be accessed only with the correct passcode. 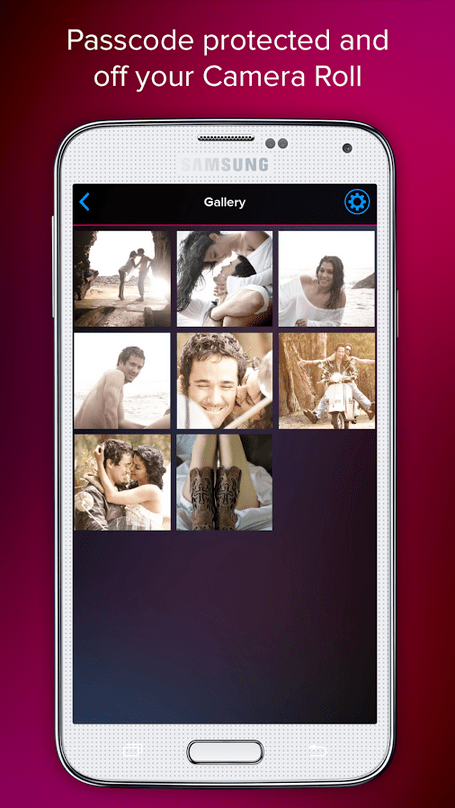 The built-in camera comes with only two options: enable/disable flash and switch between the back and front camera. I would definitely like to see more features added to the camera, as right now its capabilities are on the low end of basic.

You can also import photos into Hidely’s gallery, but this is a ‘copy’ action, so if you want to make them private, you’ll have to manually delete them from all the public locations they’re stored in.

The gallery features a Settings shortcut at the top of the pane, but it’s not exactly what you’d expect. From there, you can only invite a friend you want to share encrypted photos with, send feedback and rate the app. 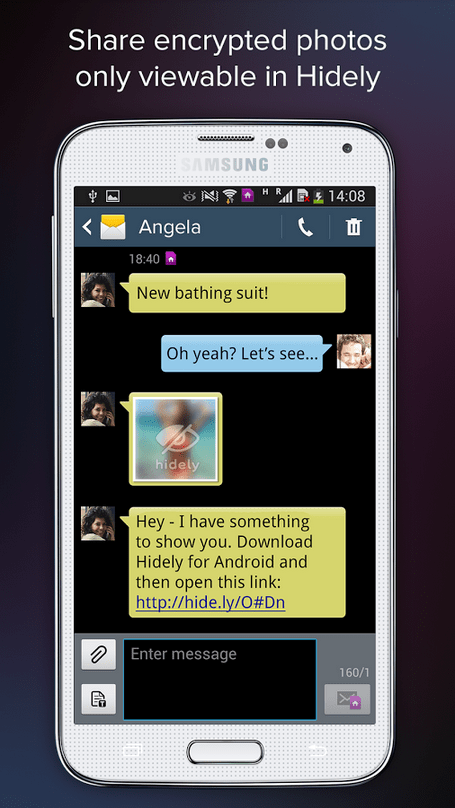 Management options for the gallery are quite limited. You can tap on a photo to expand it and the only two things you can do is share or delete it. You can share any encrypted photo via email or text as a secure link. The person you share it with must also have Hidely installed to access it, and the link is for one-time use. If the recipient doesn’t view the shared photo within a day, the link expires.

There’s a problem commonly encountered in similar encryption apps and I’m talking about the possibility to take a screenshot of the encrypted file. You don’t need to worry about that with Hidely, since it’s not possible to capture the screen anywhere inside the app.

Managing the images in the gallery can be a painful process when you gather a lot of photos. You cannot batch delete, share or import images – so you’ll have to take them one by one, for any of these actions.

At some point you’re likely to change your mind about one or more photos you store in Hidely and decide you’d like to make them public. Sadly, this isn’t possible – there are no export options whatsoever. Something you should definitely keep in mind, when you decide to import photos into Hidely and delete them from anywhere else. The process is not reversible.

Security-wise this can only benefit you, although a bit of flexibility would likely be appreciated. Speaking off, you might want to re-think your decision to uninstall Hidely after you already collected a large number of photos in its gallery. Since they are stored on your phone, but within the app and there’s no online account you can use for authentication, once you uninstall it, the encrypted images are lost forever. Just like magic, there’s always a price to pay for security.

Hidely is a free app, with no ads or IAPs included, at least for now – on both Android and iOS platforms. There’s always the possibility its developers will change their minds at some point, but given the limited set of features currently available, keeping it free seems like a good idea for the time being.

If you want to keep your private photos secure and share them only with specific people, you can certainly do it with Hidely and there’s nothing complicated about this app. Photo management features like multiple selection, additional camera options and a solution to retain the photos (even if in their encrypted form only) after uninstalling are some important features that would improve Hidely tenfold.

Strong security and the bare layout is where Hidely shines.  With that in mind, there are no drawbacks to at least testing the app but you should know Hidely will require access to your location before download – something that security conscious users prefer to avoid whenever possible.

What was your experience with Hidely? Share with us what you like and/or dislike about the app in the comments section!

Follow us on Pinterest, Google+, Facebook and Twitter to receive our latest apps & game reviews, news, tips and how tos for Android, iOS and Windows Phone. You’re also welcome to join the Pocketmeta forums for some more mobile apps discussion!