Hitman is one of the more iconic series in the gaming world, and the bald headed man with a bar-code is the visual representation of that series. Square Enix released strategy puzzler Hitman: GO for mobile a while ago, which received moderate success, and apparently enough to merit more mobile Hitman games. This time, you step into his shoes as a deadly assassin armed with an arsenal of deadly high-range sniper rifles, and a perfect vantage point. Agent 47 has a variety of high profile targets to eliminate in Hitman: Sniper, so let’s get started.

One of the more essential elements to being a successful assassin, is a keen ability to focus on your target while assessing all of the possible variables surrounding them. From a video game perspective, this is made easier when you don’t have a cluttered UI full of distractions. In Hitman: Sniper, they’ve executed this very well, and it provides a fantastic overall feel to the game when coupled with the sleek design it also features. The controls are also laid out very well, and they’re easily accessible without ever really getting in the way of your vision.

Visual variety is something that I look closely at with any game, and this one has me torn a little bit. My biggest complaint about the game by far, is the fact that there is only one map that you’re playing on for the entire game, and it honestly isn’t that big. It consists of one huge house, two much smaller houses (one on each side), as well as the nearby road and all of the outdoor activity between these buildings. I’ll get into the map more later on, as it really pertains more to Gameplay and Replay Value, but I really would have loved at least one or two environments to explore. 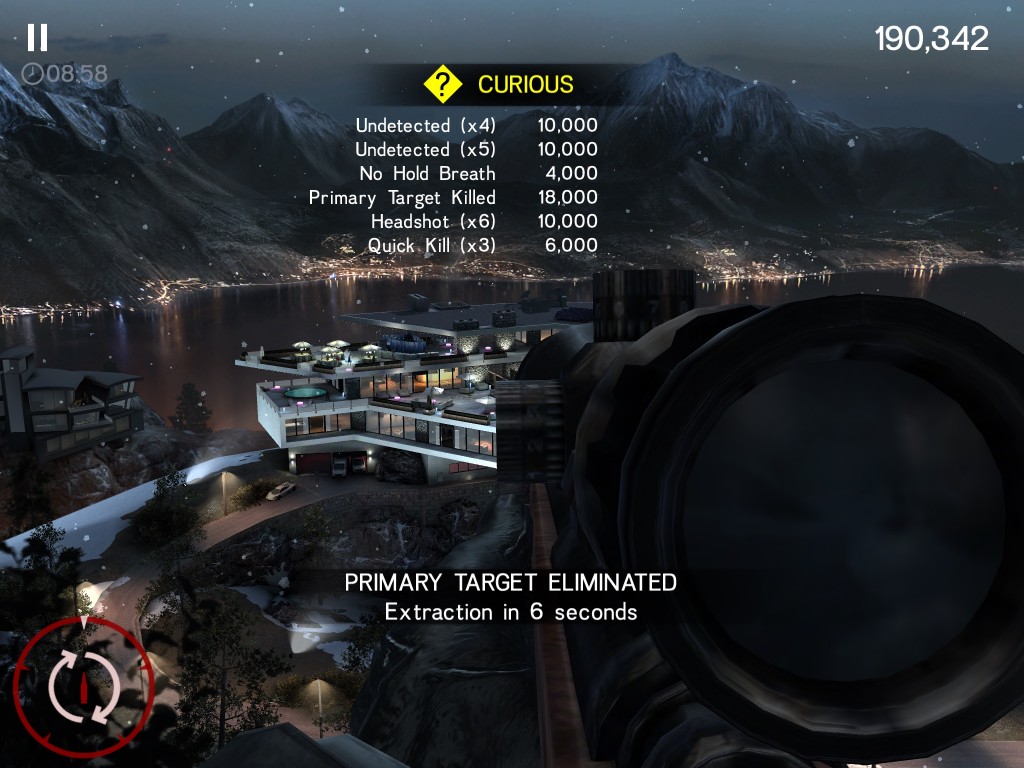 The graphics are pretty gorgeous for the most part, with a few minor aspects that could have done with a bit more detail — such as the laptops you need to destroy, and other small objects that don’t seem to match the quality of the rest of the game. A couple of visual bugs were noticeable as well, such as guards walking directly into each other, or getting stuck on an object and stutter-stepping in place. Taken as a whole, the visuals in Sniper are quite good, as you’d expect from a big name developer like Square. A couple of areas miss the mark and thus you get something short of perfection, but a big highlight is the design and feel of the game.

A lot of mobile sniper games have the same problem that most of the flash sniper games had as well, and that is the fact that there were never really any legitimate sniping mechanics involved. Usually, it’s aim and hit what is directly in your cross-hairs, with no thought of distance or bullet trajectory. Now, these aren’t exactly ultra-realistic or perfectly executed in Hitman: Sniper, but the mechanics are there and they’re something you’ll need to constantly be accounting for when taking your shots. For a mobile game though, I felt that it was about as realistic as needed.

Each mission has a primary target that you’ll need to eliminate before the mission timer ends. However, there is always at least one (sometimes more) other secondary objective that is also required to complete the mission. These can be a wide range of different things, such as scoring x amount of points on a mission, or getting a “domino” kill where you use one person’s body to kill another person via a bullet. There are 150 different missions in the game, each with their own unique objectives, which forces you to explore all of the game’s mechanics and possible scenarios. 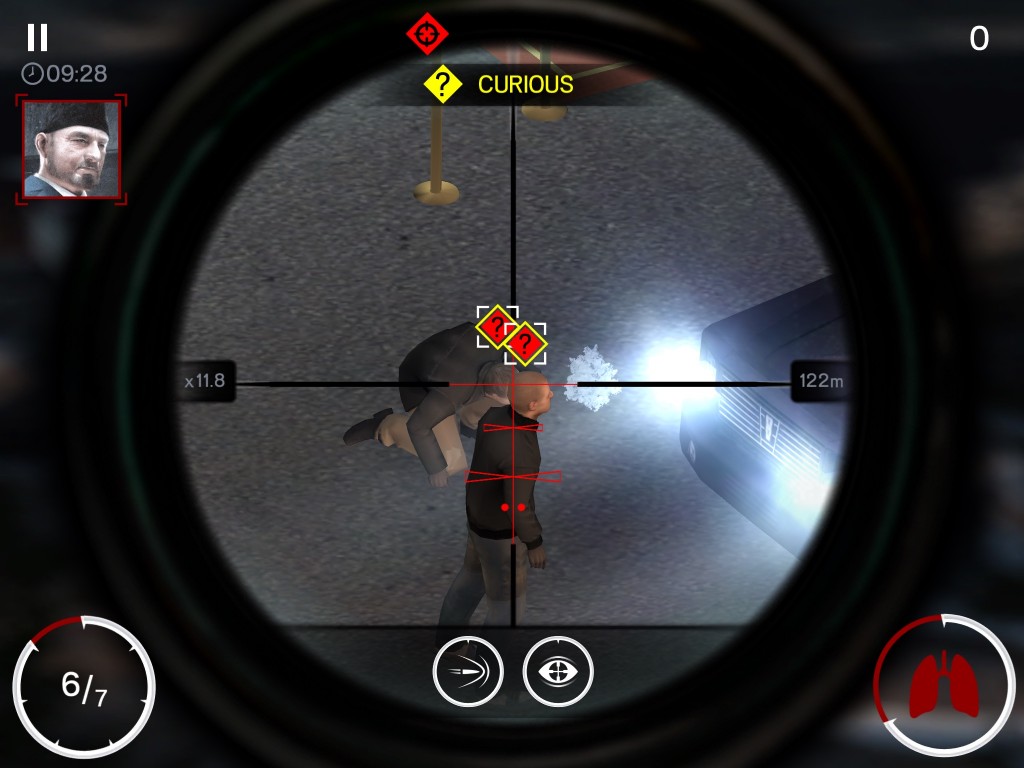 You score points during the mission by performing skillful shots, like lining up two guards for a one shot two kill combo, or chaining multiple kills within a certain amount of time. Not only do certain missions require you to score a minimum amount of points, but your high-score on any given mission is also how you rank up on the primary leaderboards. There are several different tiers of badges you rank up to, and you’ll unlock new weapons as you progress. New weapons are also obtained by laying down some cash (real or in-game), as well as obtaining blueprints from missions. Once you get a new sniper, you can spend some more cash (in-game only) to upgrade it — improving stats and giving you new use-able abilities that are unique to that sniper.

The use-able abilities are a really neat feature of the game, and are one thing that can be extremely useful in later missions in the game, as well as ranking up with a really high score. Now, there are a lot of guns in the game, but only so many abilities — meaning some snipers may share one or two of the same abilities as another, but there is always at least one that differentiates between the two. Essentially, it’s a way of creating a custom build for your character without being too linear, and still giving you a ton of different options.

Wait… there’s only one map?

As I mentioned earlier, a huge problem I had with the game is having to re-play the exact same environment over and over again. The missions are split up into chapters, so my initial thought after each of the first few chapters was, “okay, we’ll go to a new location in the next chapter”. I began to realize that wasn’t going to happen, and after a bit of research, my thoughts were confirmed. There has been some talk about future maps being in development, possibly as DLC, or perhaps we’d be lucky enough to get them for free. However, I can’t judge it based on possible future content, so I see it as one moderately sized map with a ton of missions for $5. 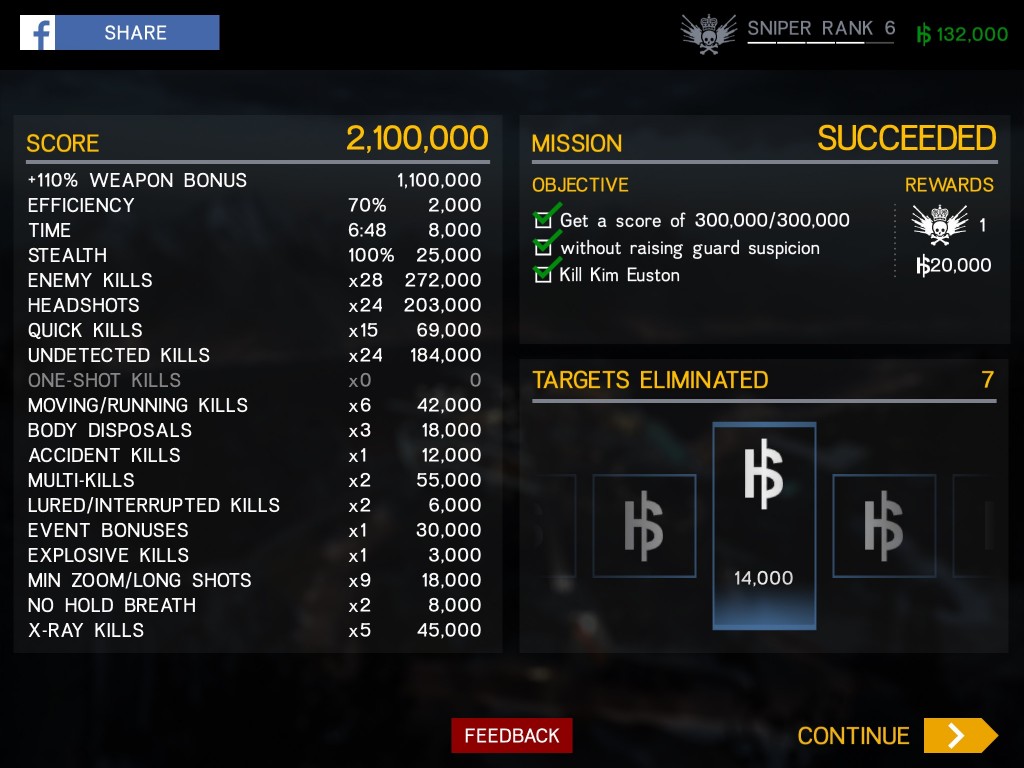 One one hand, I can kind of see what they were going for with having you learn every aspect of the map, and what the inhabitants of the buildings were exactly going to do. It’s almost like you’re doing the surveillance of the building to learn the people’s routine, while getting some target practice at the same time. That is a really great aspect of the game, and I’ll give credit where it’s due, but I still don’t see an excuse for not breaking it up into 50 missions split across three locations.

It’s really hard to not get bored of the same scenario on repeat after a while, even with regularly changing objectives and targets — although I would say its a stretch to really call these 150 entirely unique missions, it can occasionally be a matter of doing the same thing you did in an earlier mission, only better. Given how well it exceeded in Visuals, and how addictingly fun the Gameplay was, it’s extra disappointing that the Replay Value falls off about a third of the way through the game.

Hitman: Sniper is a premium game with a $5 price-tag, but there are still IAPs to buy certain sniper rifles ranging from $1 – $10. There are three to be precise (no pun intended), but you can’t unlock these by ranking up or spending in-game currency — you have to spend real cash to get them. That means there’s a gun that is literally twice the cost of the entire game. Although these prices are a rad bit ridiculous, I won’t count them against Sniper too much because they are such an in-essential part of the game. If you want to spend $17 to unlock three extra snipers, be my guest, but I’m guessing most players are going to pass.

As for the actual cost of the game compared to the content received, I’d say it is mostly justified. You get a really fun sniping game, and it’s part of an extremely recognizable series so you can expect a slightly higher price for a premium. Again, it’s the unfortunate lack of content variety that makes me a little skeptical to say this game is really worth the money. Not that $5 is a huge chunk of change, but it’s a decent price when comparing to the rest of the mobile market. If you’re on the fence, check out the verdict to help with your decision.

Fun, addicting, and very well-designed are some of the key positive elements of Hitman: Sniper. The majority of the negative elements, such as being repetitive and visually unchanging, are all tied to the lack of environment change throughout the entire game. If you’ve got a liking for sniper games, I’d definitely recommend checking this out, but for those who are hesitant to spend a decent chunk of their mobile gaming budget — you may want to wait and see what kind of content comes along in future updates.