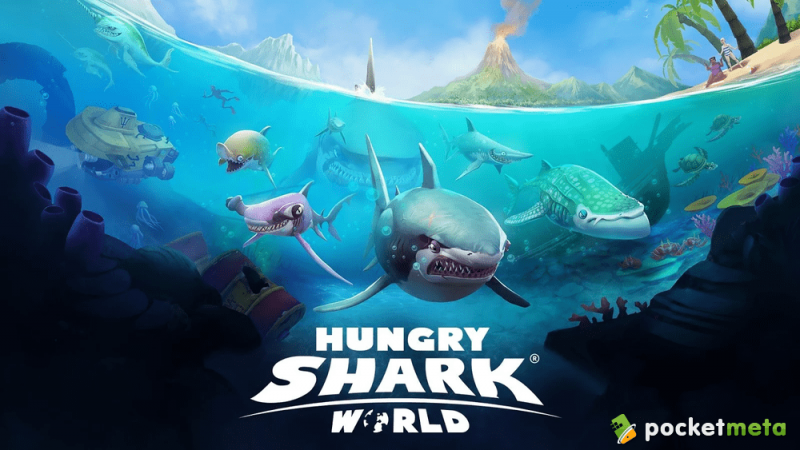 Hungry Shark World by Ubisoft is only a week old, that is if we don’t take into account the forever long soft launch, and it scored more than ten million downloads across the mobile play stores. As my colleague Alexandra said “People are playing like crazy,” so let us try to see what makes this game so popular?

In the first place, the obviously decent promotion budget that put the app in the prominent spots of the market for everyone to see. As well as generous coverage and scores from the mainstream gaming websites. You get that for being Ubisoft. In the second place, it’s the mindless bloody fun that devours the little of the free time you have in store for things like “spend more quality time with my family.” So, if you hear your spouse or kid shout “Go! Go! Go! And Munch, munch, munch!” you should know they’ve most likely fallen prey to the Hungry Shark World. Don’t expect them to surface from the pool filled with torn human bowels and toxic waste any time soon.

As is the case with its predecessors in the series, Hungry Shark World is a logic sequel to Evo that sees you controlling a shark on a killing spree. At this moment let me say if you avoided the warm waters of the Caribbean or Pacific or whatever natural swimming area you have in favor of the chlorinated swimming pool last year, Hungry Shark World won’t make you feel any less comfortable treading in the water. Including the swimming pool.

Sharks in the Hungry Shark World are based on the real species, unlike the phantasmagorical monsters of the Hungry Shark Evolution. There are 17 shark species in 7 shark tier categories, and you unlock tiers one by one as you play, while unlocking sharks in those tiers also takes in-game currency. But let’s see the gameplay for a while. 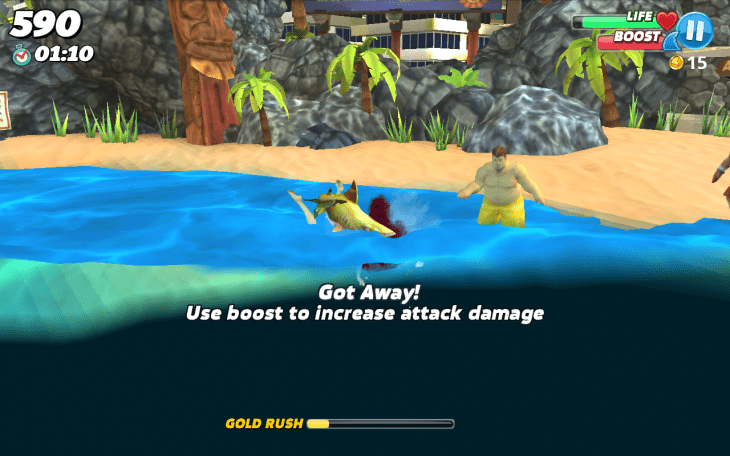 Hungry Shark World is a 3D side scroller. Drag the movement joystick on your right to move the shark left, right, up or down. Tap the screen to activate the boost when its meter gets filled. Different sharks have different abilities but the same line of stats – speed, bite, boost. Depending on your shark’s stats its performance will vary, too, but the core of the gameplay is to swim from shore to shore munching on anything that gets in your way.

Fish, jelly fish, people and boats – everything in Hungry Shark World is food. Including you. So, do not hesitate to waive your tail in the face of a bigger predator. Or else, be eaten.

One cool feature of each map is how it’s filled with hidden passageways, and secret areas you had no idea existed. Surprisingly, your shark can simply jump off from the water and onto the beach and move on its stomach to munch on the unsuspecting people in the bathing suits and cops trying to shoot it down.

The people in Hungry Shark World are really stupid, so they do not evoke any compassion whatsoever. They run towards water instead of from it if you attack them on the beach. They keep swimming away from the beach if you attack them from the side of the shore. So, yes, the prey are pretty predictable, and the lack of good-looking bikini-clad models strips you of the last remorse. Go munch on that man-burger! 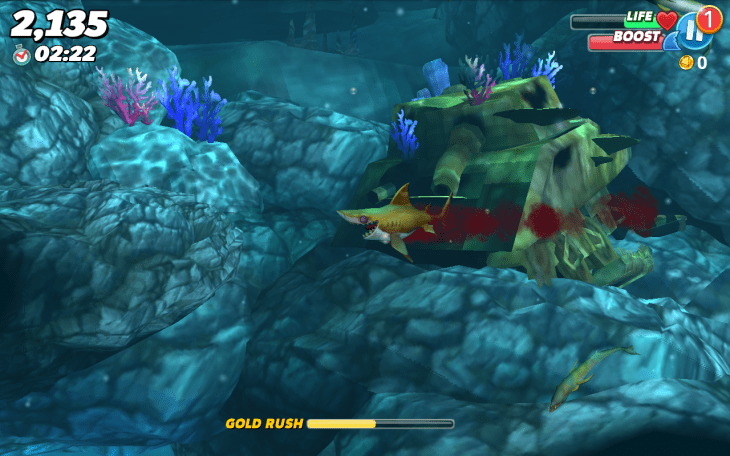 Each shark can be dressed up, can have companions, can have accessories and two powerful gizmo – a laser and a power shield. The laser stuns the nearby prey while the shield protects you from the bullets and harpoons. A companion shark or jelly fish adds some percentage to the general stats of your shark. Each shark can have a limited number of companions. Of course, each perk is locked until you buy it for in-game currency.

There are also several premium maps, and they contain a load of beautiful areas in different aquatic regions of the planet. The Arctic map, for example, tasks you with breaking caps of ice, gobbling up packs of penguins and indigenous people, as well as crawling on the belly through the guts of a giant oil pumping station to reap the employees. Another map in Pacific is filled with hotels, pretty reefs and a swimming pool with a tube below it you can use as en entrance or escape pod, if you are fit enough to pass it. That said, Hungry Shark World provides a lot of content you will enjoy discovering. 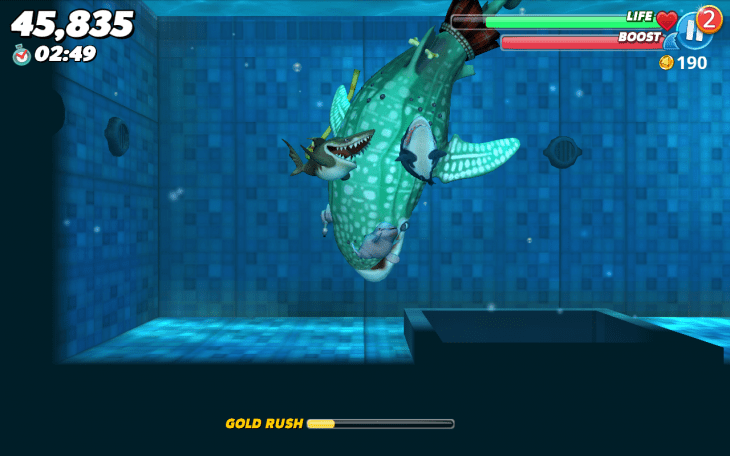 The gameplay sessions are fast, short and sweet, and each replay earns you coins and gems. You will need both to unlock new sharks, accessories and companions and maps. In terms of in-app purchases, of course, Ubisoft has them galore. From the can full of gems worth $4.99 and can full of gold of equal price to the ocean of gold for $99.99 and an ocean of gems for the same price, you have your options.

You can grind, and at some point a non-addictive personality like myself will get off the hook. If you buy into it and spend some money to unlock, say a Tiger Shark worth 500 gems, or a Great White Shark (900 if I am not mistaken), you may find there is more juice to be squeezed here. Especially since the bigger and badder sharks have more difficult missions. 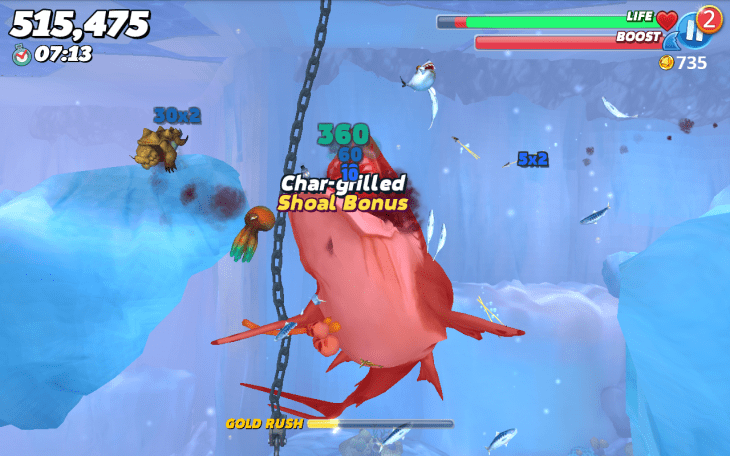 The bigger and badder are also faster and at some point can become invincible. And the irony of the invincible shark is its health bar depletes even faster than that of an average one.

Yes, there is a good deal of replayability here, especially for the younger audience. There is an option to turn off the blood from the game’s settings, in case you were wondering, but the action is quite explicit nonetheless.

There does not seem to be a demand for strategy in Hungry Shark World. You swim around, consuming anything you can, so fast reflexes and dumb luck are more at play than any resemblance of a thoughtful planning. 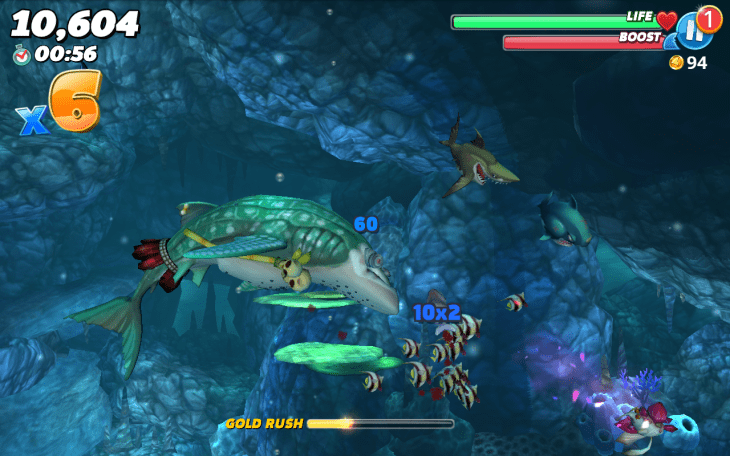 Hungry Shark World looks good, but the side-scrolling layout takes away from the 3D effect and makes it look like a 2D when you realize you can’t swim where you want. Other than that, it’s a good-looking game, but that’s all. I wouldn’t sing odes to it. Dig the same map a few times and suddenly the novelty wears off, so you feel either compelled to buy a new map or quit playing. Which way you go depends on the level of addiction that game managed to instill in your cortex, or whatever part of the brain is responsible for addiction.

Performance tends to stutter the longer I play; a force-close solves the issue. If you wish to share your results with your friends, you will need to log in with your Facebook account, which is a bummer. At the same time, the extensive permissions Ubisoft requires for Hungry Shark World make it a no-go for the privacy-minded users. There is no reason for it to run at startup, pair with Bluetooth devices or access my location. So, I see no reason to let it through NoRoot Firewall. If you wish to compete against your friends, however, you will have to tolerate the invasion. 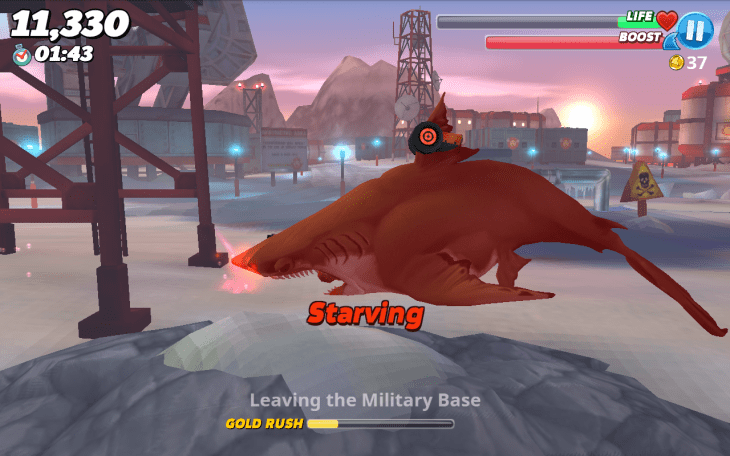 Hungry Shark World is a guilty pleasure kind of game – brainless, bloody and toxic. It’s the McDonald’s of mobile gaming. If you have time to kill and spare ~450 MB storage, go ahead, lose yourself to the human-loathing fun. The game is colorful, hectic and addicting, so no wonder it’s popular among the general public. Which is kind of sad.