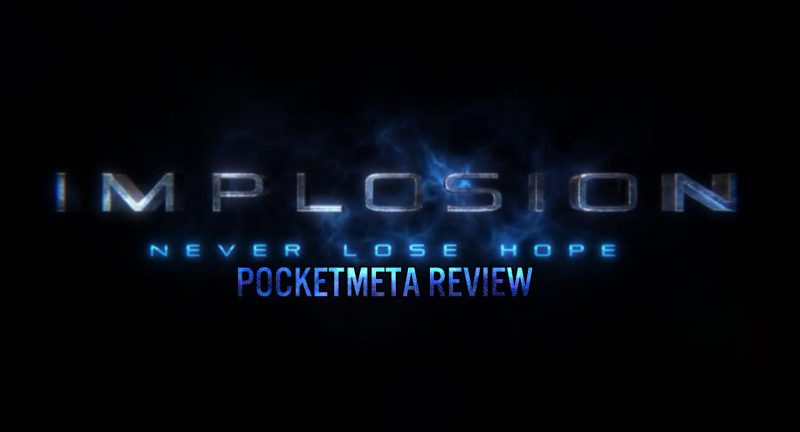 When it comes to games with a legitimate story-line, lengthy campaign, and no bogus wait timers or IAPs — they are just a bit too few and far between. It seems like months go by before we see a game like this released for any specific genre, but hopefully Implosion: Never Lose Hope can help spark a new trend in these types of games being released a bit more frequently. The game has a price-tag of $10, and after playing the game for a while, I’d say that price is spot-on appropriate. Implosion is out on iOS right now, but unless a couple days have already passed since this review went live, you’ll have to wait until April 17th for the Android version.

A long and enjoyable ride

Implosion boasts a rather lengthy campaign, with several chapters containing eight individual missions. Although there is no real playable content outside of the main story, there’s plenty of things to merit multiple runs through previous missions, such as badge collecting and leveling up your second character if you unlock it. Even if you were to just play the game from start to finish on one difficulty, it will still take you roughly three hours without any failures. For those who want to complete the game 100% (as you should, with any $9.99 mobile game), you’re looking at upwards of 12-16 hours depending on the player.

With the question of there being enough content to merit the price out of the way, let’s take a look at the quality of said content. Each mission is very linear and shows you exactly where you need to go for the main objective, and although it might have been cool to have combined a few of these missions to make bigger, longer, and more exploration friendly — the format still works quite well. Although the general idea for each mission is to eliminate all enemies and make it to the destination point, some do have a sub-tasks like keeping enemies out of a certain area or collecting ID cards to open a locked door. 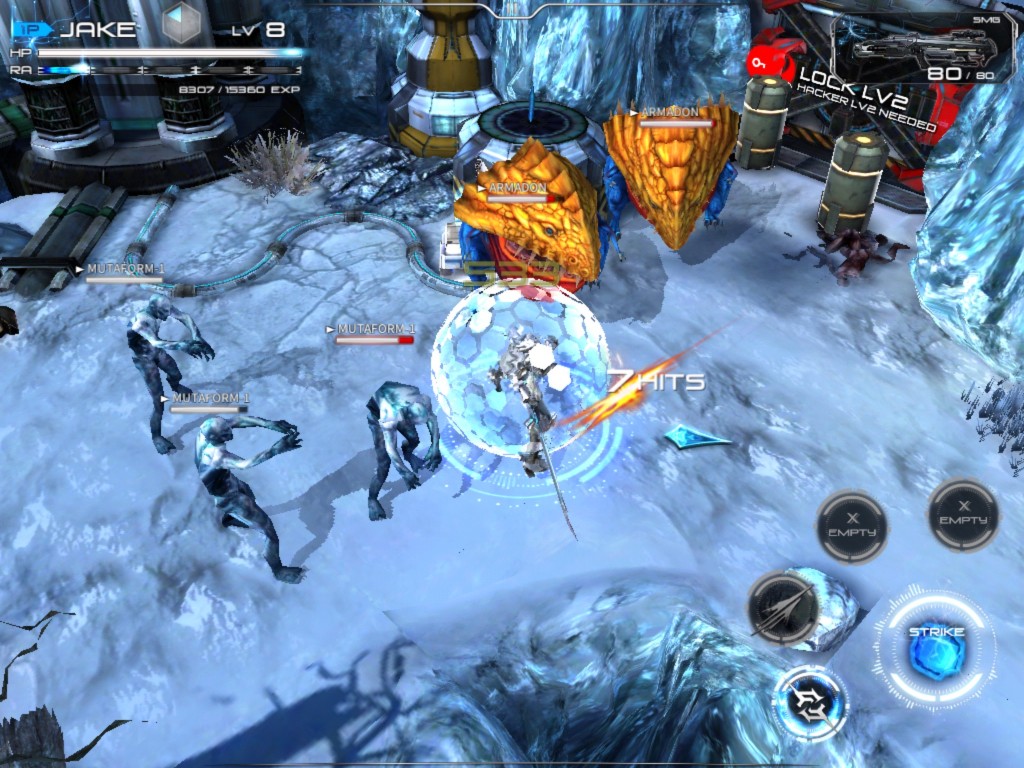 Visually, the game looks very good, with a ton of different environments you’ll play on throughout the campaign. and a variety of uniquely designed enemies as well. You can go from fighting inside of a hi-tech ship during one mission, to fighting on top of a snowy mountain in the next. It looks as though the graphics were toned town a bit to ensure the game would run smoothly, and this really seems to show with some textures looking more grainy/pixelated than others. Regardless, the game runs extremely smooth, and overall there really isn’t much to pick on when it comes to Implosion’s graphics.

Something that is very important in an Action RPG, or any Action game for that matter, is that there isn’t a bunch of frame-rate lag and stuttering on-screen. It’s also something that Implosion executed with perfection, as I touched on above. There was never a single instance of lag that I noticed while playing through the campaign, and even the most graphically intense abilities or moments didn’t cause a stutter. I was playing on an iPad Air 2 which could mean that older devices might have issues, but it seemed as though this game wasn’t really pushing the limits of my tablet, so you’d still probably be fine playing this on a 5S or maybe even a 5.

The combat in Implosion involves both melee and ranged, and it’s extremely easy to swap between the two. For melee, you can either tap or hold the attack button, and for ranged, just drag the attack button in the direction you want to shoot. You start each mission with an SMG that automatically reloads over time, but you can also pick up weapons during the mission and use them until they run out of ammunition. Other than that, you have three move combo dodge roll, as well as three other interchangeable abilities that will help you in combat. 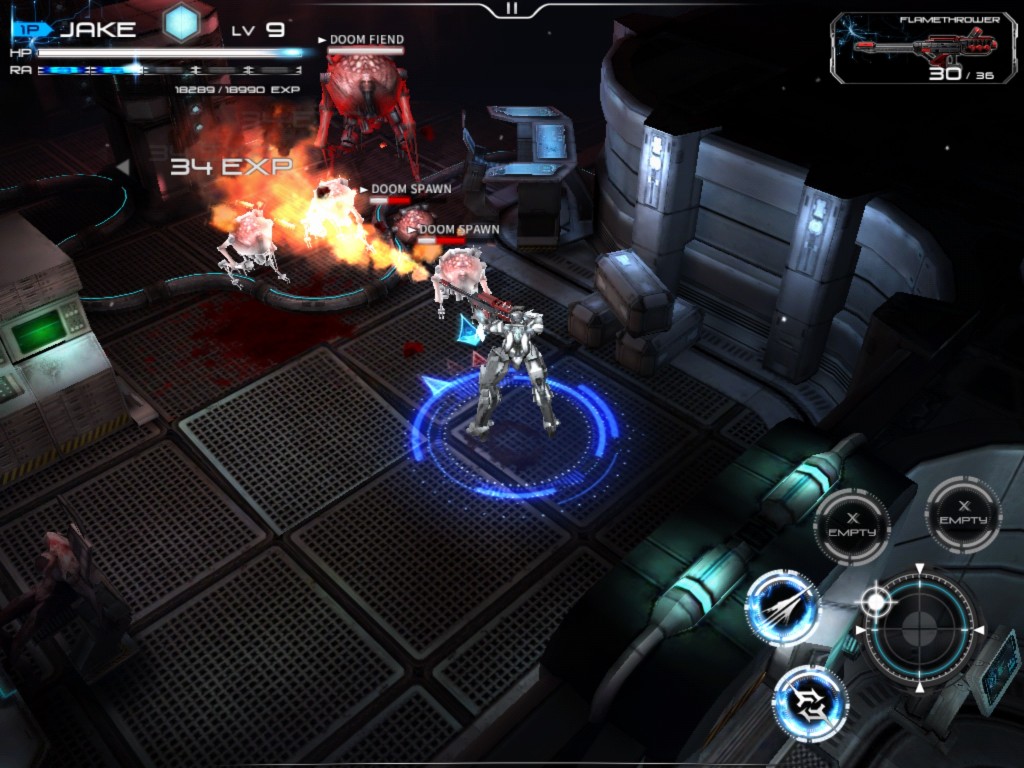 Your three abilities are determined by the ARK you have selected, these are various items that give you increases/decreases to certain stats. There are seven different ARK slots that take different types of ARKs, which are obtained by completing missions and unlocking badge rewards. There is one specific ARK that determines your abilities (the big one in the middle), so in order to unlock new abilities, you’ve got to loot certain ARKs from missions. Personally, I thought the entire ARK system was a great way to break away from a linear upgrade system that you’d typically find in a mobile Action-RPG, and give something a bit more customizable.

I’ve noticed a lot of games seem to have a pretty evident gear requirement to make it past certain levels, such as a boss that will pretty much kill you in one hit if you don’t grind enough items to fuse into your armor so that its strong enough. There’s really none of that in Implosion, of course you get stronger as you level up and loot more powerful ARKs, but there’s never really a feeling of anything being unbeatable. The game is very easy to clear on Normal, as you’re given 5 revives per mission, and Hard isn’t much more difficult and still provides you with 3 revives. Expert mode is another story, but that’s only for those who have already cleared the game and likely have plenty of gear and playing experience.

Each mission has between 2 and 5 badges that you can unlock by performing certain tasks in that mission, such as taking no damage or smashing all containers, and these will add to your badge total that eventually unlocks various rewards when you accumulate a certain amount. Badge rewards include things like rare ARKs, permanent weapon unlocks, and even a new playable character. You can view a full list of badge rewards from the main menu, and it even includes the amount of badges needed for each specific reward. For the new character you only need 42, which is close to about how many you should have when finishing the campaign on normal mode. 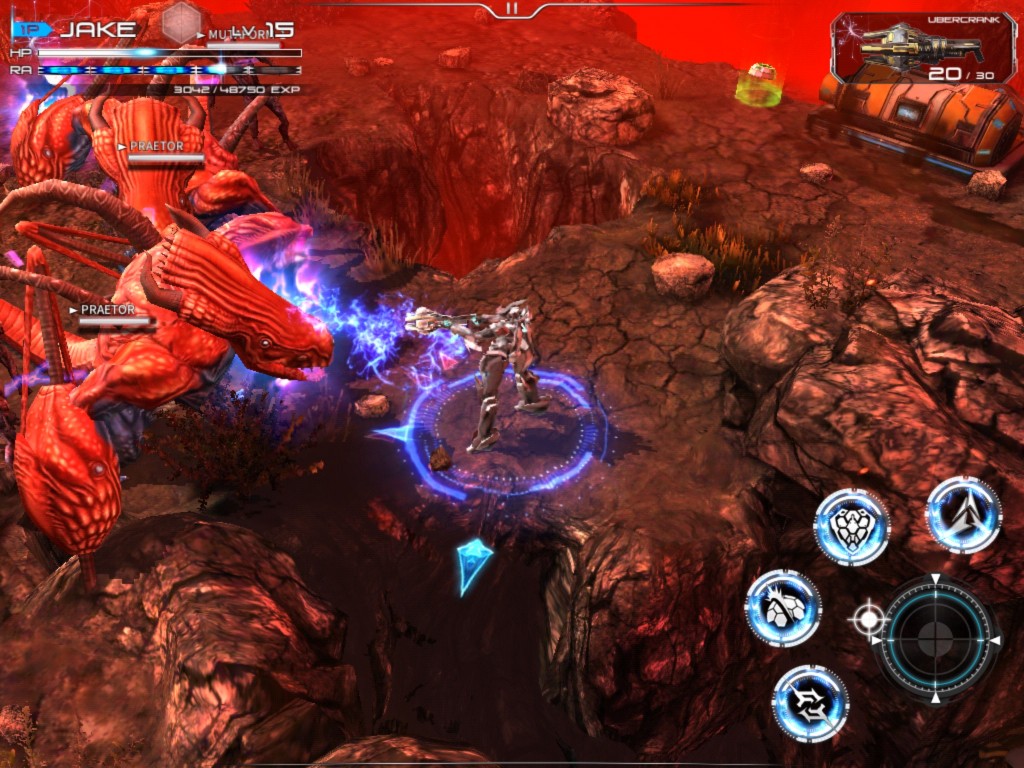 There are certain badges that require you to play the mission on Hard Mode to unlock, and others that can be completed on either difficulty, with the Hard Mode badges typically being something along the lines of completing the mission without using a revive, or without losing health. Although some badge objectives are re-used for different missions, there are quite a few unique ones to help keep it interesting. Also, some of these objectives are much more difficult than others, so it’s usually a good idea to jump around and knock out the easiest ones first.

Essentially, your progression of the game will likely go from playing the campaign on Normal to Hard, then badge hunting on Normal to Hard, and eventually stepping into the Expert Mode when your character is fully decked out. Oh, and somewhere along the lines you’ll want to start working on the second character as well, which provides quite a bit of playable content overall. As long as this is a genre that you enjoy, there’s no reason you shouldn’t be able to put a good 10+ hours into this game without ever getting bored.

There are no IAPs in Implosion: Never Lose Hope, just the $9.99 premium price-tag. That means no waiting timers or premium currencies, but also no way for you to but your way to a fully decked out war-mech. 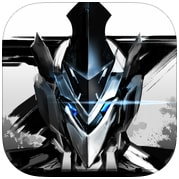 Implosion: Never Lose Hope, is a pretty good model for what a premium Action-RPG should look like. Plenty of campaign missions, tons of ways to build your character, combat that tests your skill (not your gear), and no waiting games or gimmicks. This game was able to bring the feeling of a God of War or Ninja Gaiden type game to mobile, without feeling like you’re playing a generic mobile version of one of those games.