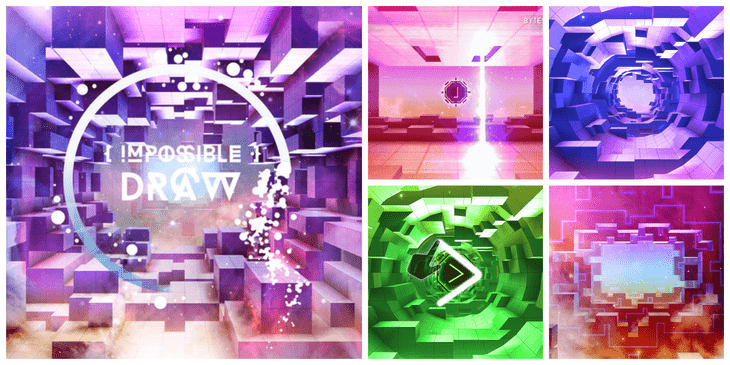 I never start my reviews with a “wow!” but this is going to be the first time, and let us hope 2015 will bring us more games that will wow us right from the start. Impossible Draw is a new Android (and iOS Universal) game that will hook anyone with a taste for cyberspace-styled visuals and good music. 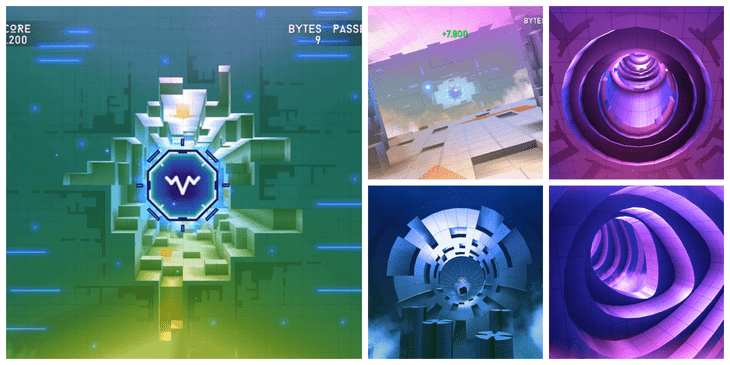 You float through dynamically changing environments that look like the insides of a Matrix, or something. Think Smash Hit because Impossible Draw has that familiar atmosphere. So, you float and marvel at the beauty of your whereabouts, but there is no time to waste because there is a closed gate in front of you. It will remain closed unless you write a symbol that is on it. That is it – a pretty simple premise and minimal plot, but the fun that goes with it is huge.

So, you scribble a horizontal line, or 7, and think – that was easy, I think I can do that enjoying the awesome soundtracks and the stunning design. Alas, that Zen state won’t last long because the speed increases, and so does the complexity of the symbols. Before long, you will be perspiring scribbling out very complex symbols, and as far as I understood from my experience with the game, you have to draw them in a single touch – tap and draw to finish, instead of drawing it as you normally would in a few touches drawing each element separately.

Once you fail, you hit the gates and game over – restart. While you play, the system generates bytes for you – the in-game currency, and the longer you play in a single session without failing, the more bytes you have for the other goodies. 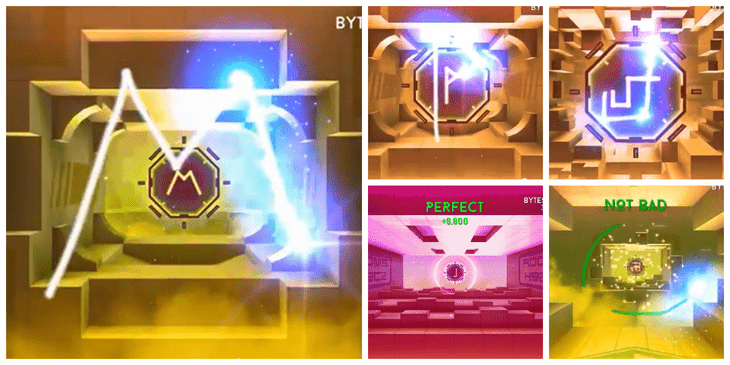 Impossible Draw has me totally immersed with its impressive graphic art – everything is rendered in sharp 3D, and the one thing I am missing in this game is the Cruise mode where you don’t need to solve challenges, but just watch the relaxed tube-floating. I am definitely putting some of these themed screenshots as my wallpaper.

There are three themes you can switch once you have them all unlocked, but the default one is gorgeous enough to explore its depths.

In terms of music, its ambient touch creates the right atmosphere for the Matrix tripping, and you can also change soundtracks. There is a choice of some 8 soundtracks, some intense, some relaxed, some more electronic than others, so chances are you will enjoy exploring those.

Overall, the art work, both designer and music score, are superb. 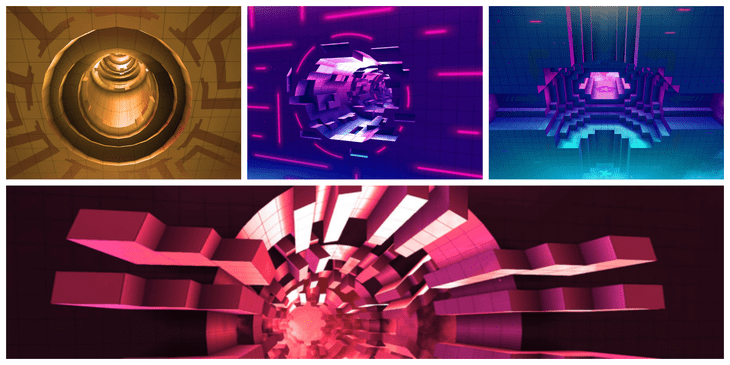 The game is freemium, which means you can play without paying. There are several undeniable strong points in the way isTom Games made their freemium a fair one. First of all, there are bytes – an in-game currency you earn by playing. They don’t come easy, but you will definitely earn enough to unlock a new soundtrack within a single gameplay session. Double that up and you can unlock a new theme.

If you don’t feel like waiting, support the developers and buy the bytes packs to unlock that stuff right away, or remove ads. The latter are not intrusive as far as I am concerned, but if you are the type of person who gets easily annoyed, cash out $1 to remove ads. Bytes packs come at a variety of prices ranging $1 – $5. 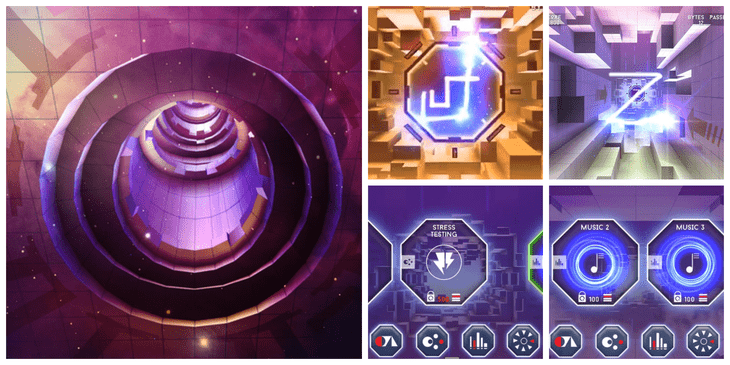 The first thing you will want to press is the Play button, but once the initial curiosity is quenched, I suggest you browse the other buttons, including the Shop, and here is why. The Shop icon will have a number in red, which means you have enough bytes to purchase something from the shop for them, not your hard-earned cash. This is where you find themes, soundtracks, special effects – these effects accompany the symbols as they appear on the gates and when you draw them, like a glow, a sparkle, stars and the like.

You can also buy, or unlock several game modes. The default is Basic Testing while there is Advanced Testing, Fine Tuning and Stress Testing, which basically correspond to the difficulty levels – normal, hard, hardestest, extreme, or lethal, you name it.

Don’t rush to unlock soundtracks without listening to them, because you don’t need to unlock them in any order. Note, when you press on a locked soundtrack, it will start playing, so you can get an idea of what it is, and choose the one you want first.

Also, UI keeps your stats under the Symbols button. Overall, according to my stats at least, there are 303 symbols, and the stats show me how many of those I have discovered already, and what is my accuracy rate in average and for each symbol. I sort of expected you would be able to take a sneak peek at what is coming your way, but alas, the stats only display the discovered symbols. In addition, you can compete with your friends since sharing results is supported, too.

This is great for pre-schoolers – bright, beautiful, competitive, non-violent, developmental and free.

There is only one nag – recognition. It either needs fine-tuning on the developers part, or tolerating on the players’ part. Sometimes, the game would accept a poorly scribbled symbol as Good or Not Bad, but other times you can be near-perfect and it won’t accept it. The nature of this recognition nag almost seems like the entire Accept/ Decline system is random, but it is definitely not. However, the flawed recognition does add a spoon of salt into an otherwise perfect gameplay.

Impossible Draw is one of the best December’s releases featuring beautiful hypnotic atmosphere of 3D cyberspace-like art work and complementing electronic music. Everything about it is top-notch – visuals, challenges, speed, UI, stats, variety of content and a fair IAP/ or unlockables system that allows you to unlock extra content by simply playing. Its recognition is somewhat flawed, but I am sure the developers will address this issue in the upcoming updates. After all, it is a near-perfection, so why stop here? For any fan of the dazzling and challenging twitch games, Impossible Draw is a must-have, and a new classic.