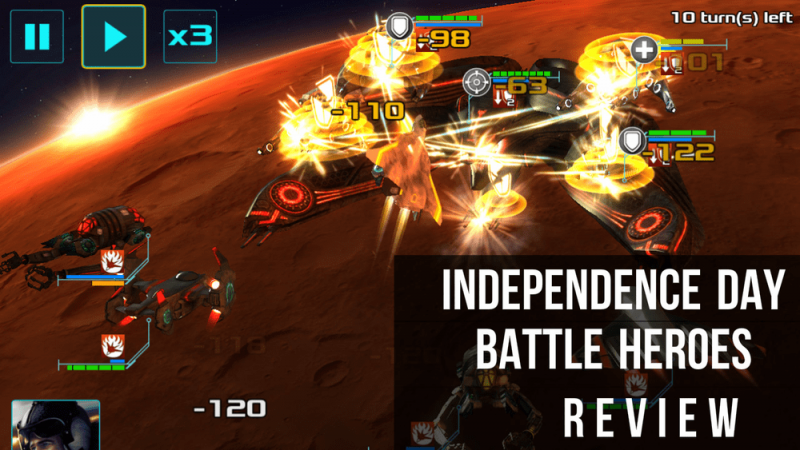 Being a turn-based strategy role-playing game, Independence Day Battle Heroes takes off where we think the new movie does – 20 years after the invasion. We have reverse-engineered the alien aircraft and used the technology to build some of our own space fleet. Hence, your pilots will sport fancy fighters, interceptors, jets, utility crafts and moon tugs, whatever that means.

The very structure of the UI reminds me of the Star Wars Galaxy of Heroes, too. There are: 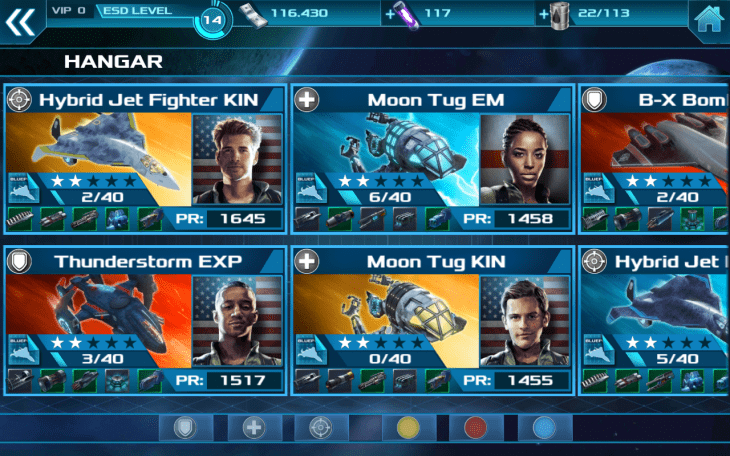 The characters in Independence Day Battle Heroes come along with their respective aircraft, and you need to collect their blueprints to unlock them. As usual, these blueprints can be found in the missions across the board and in the shipments. Nearly every section of the game contains its own store, and its own currency, so there is a variety of ways you can earn and spend the cash, insignia, etc.

You can upgrade various parts of each ship, the pilot’s skill level, and each pilot’s special abilities’ level. Each upgrade-able slot requires a specific item, so the entire process is lengthy and takes a decent farming. 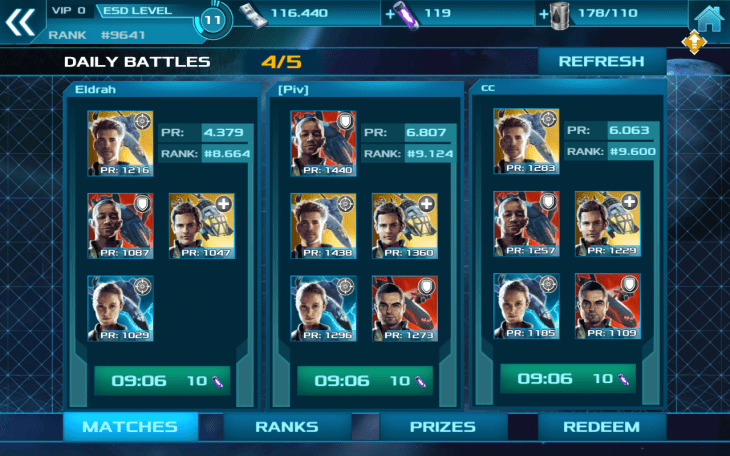 The gameplay is pretty simplistic. Your squad (up to 5) and that of your alien enemy stand in front of each other in the outer space and exchange bursts of fire and spits of energy. The combat is turn-based, and there are nifty Play and Fast-forward buttons for those times when you know you’ve got the winning hand. When in doubt, go manual because I found it was possible to win 3 stars in the missions the automatic AI would lose.

All ships come in three categories – kinetic, explosive and electromagnetic. Likewise, all ships are armed with shield against a specific kind of weapon. The game makes matching your attacks with the most vulnerable enemy craft easy – by highlighting the enemy ships with three colors, red, orange, and green. With the green being the most vulnerable ship to the attack you are about to launch.

Each ship also comes with one main ability that recharges immediately and two special skills that recharge after an X number of turns. Once your squad unleashes its firepower onto the pesky aliens, the latter fire back at you until the battle is done. 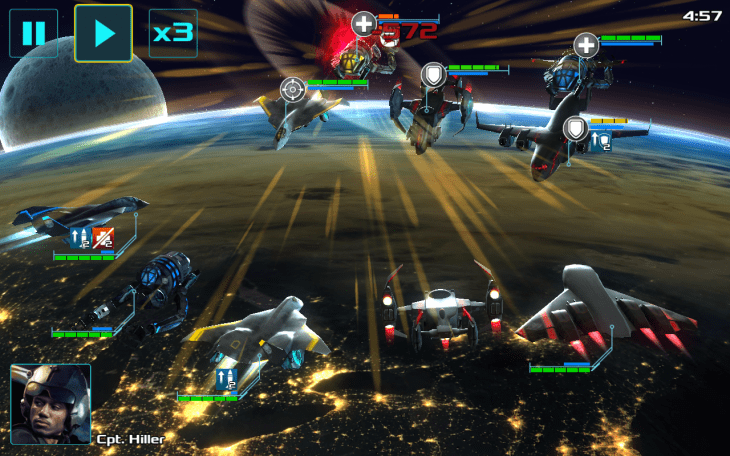 Missions, challenges and operations come in three types of battles. Attack waves see you battling hoards of aliens that come in waves. Boss fights task you with defeating the boss and its minions, or just the boss, before the boss fires back at you. The bosses have long cool-down timers, but when they fire, they knock the entire squads down, so neutralizing the boss ship in under an X number of turns is essential. And counter defense fights, where you need to keep your ships alive for an X number of turns till the reinforcements join in.

If you clear a stage with three stars, you can then use a quick loot ticket to replay it without replaying. You just harvest the loot again. The three-star levels can also be played on Hard mode, and if you score three stars in Hard mode, you can also replay it with the quick loot tickets. The number of replays is limited to three per day. This is a good way of earning pilot training and skill upgrades. 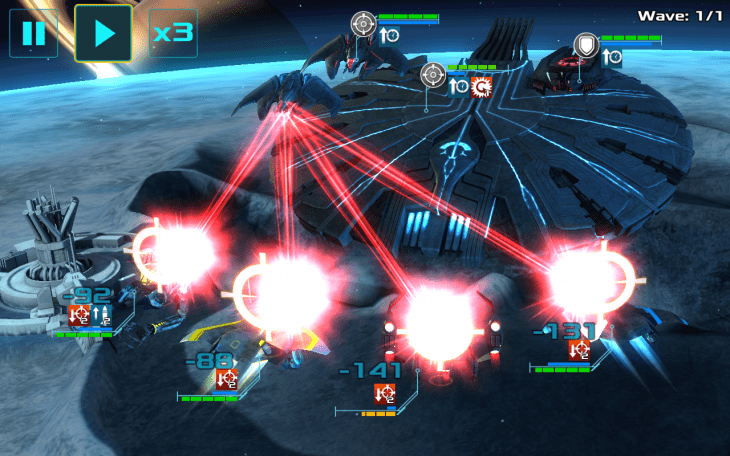 Notably, some parts you win or buy won’t fit in any of your craft because it’s level higher than they are. I am not sure as to where those parts go; I just hope once my pilots reach the required level I will be able to use them.

If I am correct, there are 33 pilots and aircraft. You can level them up by earning or buying blueprints, and you will want to keep your entire squad upgraded to its maximum capability at each given moment. Because you will be using more or less all of them – challenges let you play with certain types of pilots/aircraft only, as much as operations and Arena PvP.
Speaking of the Allies, even if you have no Facebook, you can still summon random allies in certain battles, based on what the AI offers you. 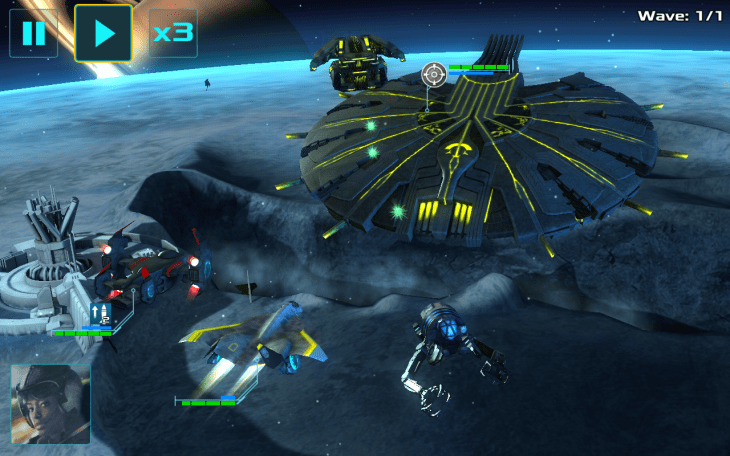 The UI is simple, straightforward and clean, I’ve had no problems navigating. The controls are responsive, as if there was a way of using them in the battle. With the Play and fast-forward, and the overall lazy combat gameplay, Independence Day Battle Heroes is more of a quality time killer for the fans of the movie, and the genre. Even though it’s a fairly familiar scheme and quite frequently used on mobile these days (Star Wars Galaxy of Heroes, Soul Heroes), it’s a well-done “more of the same” game.

The looks are polished, and the aircraft models are spectacular, as much as the weapon blasts and frequent close-ups. Even the backgrounds aren’t lazy-painted, and make for quite an atmosphere. You also get quite a lot of Jeff Goldblum and Liam Hemsworth text bubbles, so as far as movie tie-ins are concerned, Independence Day Battle Heroes is quite a legitimate looking and moderately deep free-to-play game. 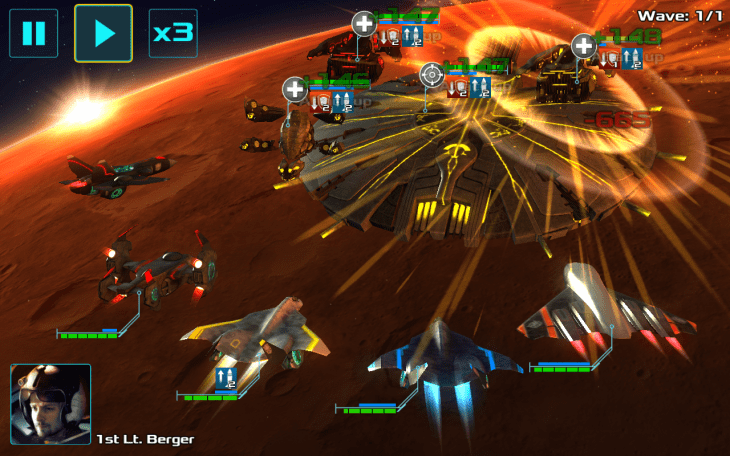 Since we mention ftp, it’s not obnoxious, and you can advance without paying a zilch. Surprisingly, I have not seen any video ad offers for some additional loot. So, it’s either patient farming and collecting everything you can collect in a day, or paying in cash for fast progression.

If I have invested several weeks into Star Wars Galaxy of Heroes, I see no reason not to invest that much time into Independence Day Battle Heroes, especially since the latter franchise has not been worn out as much as the former. Your mileage may vary.

It’s fun to play it while the daily assignments keep granting you loot, and while you cover all replays allowed per day. After that, the progression stalls, if you don’t pay. 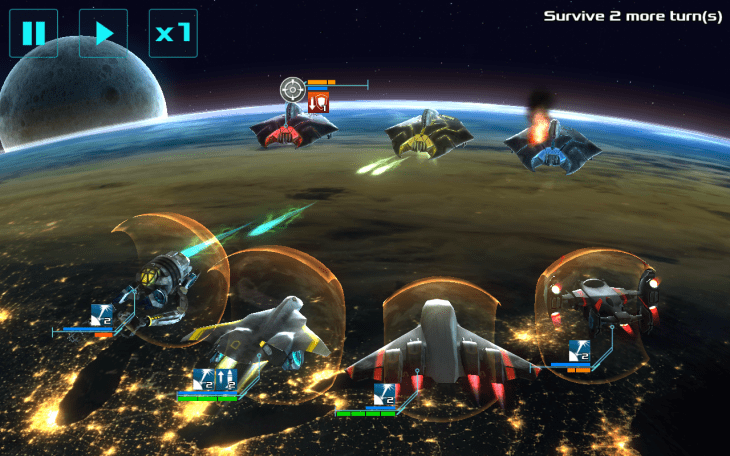 All in all, Independence Day Battle Heroes is a beautiful turn-based space strategy and RPG with an Independence Day skin. And that skin alone is worth giving it a try. Because everything else is fairly familiar, and you should know by now if it’s your cup of tea.