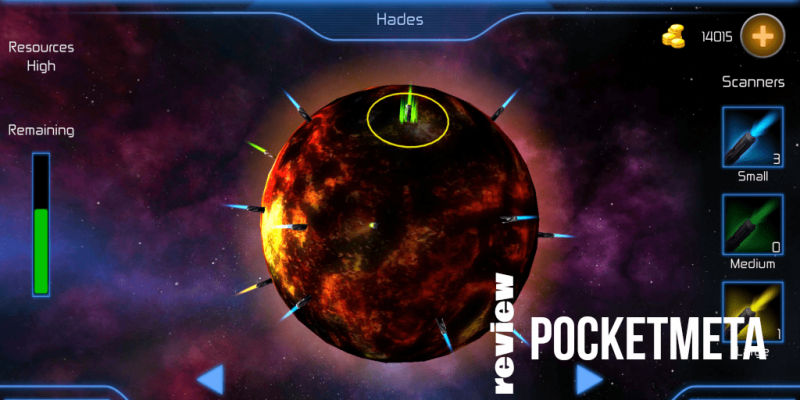 According to this Unity forum thread, Interstellar Defense is RedForce Games’ first game that took the developer over a year to build. Truth be told, I wish all the first games were this darn good. Except for the title I struggle to memorize for some reason, the game is pure TD awesomeness. Check it out.

Set in space in some distant 24th century, the human race has finally ventured in the outer space and found the planets to colonize. We have also discovered that the alien races are not that friendly after all, as happened to the noobs in the Childhood’s End, and now we need to assemble our fleet to defend what we claim. 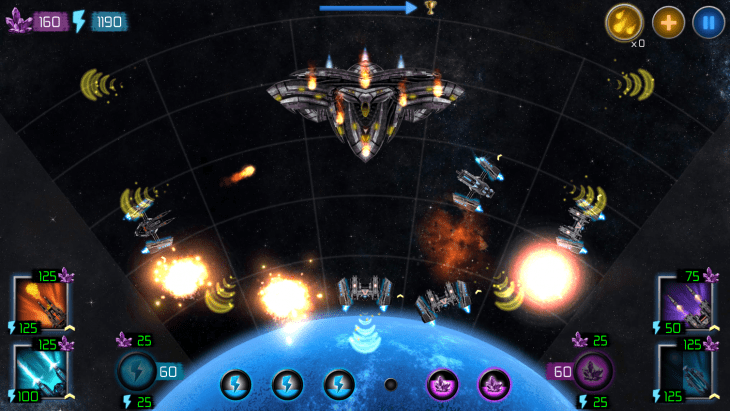 The gameplay is both simple and engrossing, and its addiction factor is in its accessibility, which does not mean it’s shallow. On the contrary, there is development, beefing up and expanding.

You have various sectors, the solar systems with the planets to colonize. First, you need to unlock a planet by paying an X amount of golden coins. Next, you need to claim the planet. To do so, you need to complete a mini-game of memorizing the placement of the identical tiles on a grid. You have a limited time to complete the grid, but if you fail nothing happens – you just re-try.

Planet claimed, aliens are on their way. Now, you need to protect your property. The planet and the immediate space around it is laid out as a 5×5 grid. You have two resources your planet has to generate to build your defense ships – energy and crystals. At the bottom of the grid, you can see two buttons – one for energy, another for crystals. In between, there are the production slots. The trick is to collect the produced resources fast, and to fill in the production slots when the cool down timer for the two resources has completed.

So, you tap or swipe to collect the resources and then think strategically on how to place your defenses best. You don’t have much time to think because by the time you can build your first or second ship, the enemy ships are already incoming. 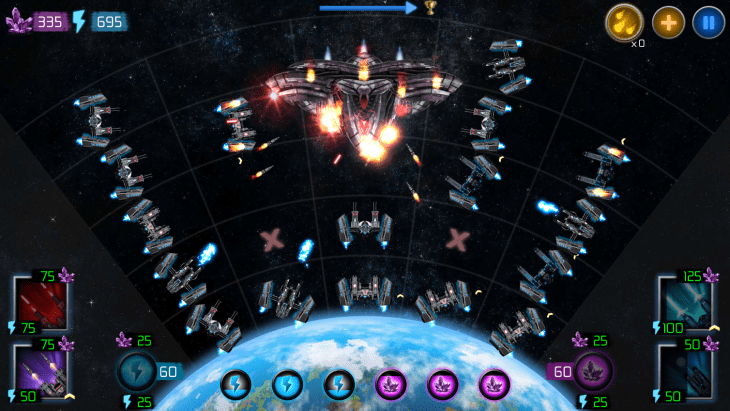 Each ship needs an X amount of energy and crystals to be built, and each ship production button has a cool down timer. Depending on the level, you have 2 to 6 ship production slots. Also, depending on the difficulty, you have 2 to 6 resources production slots.
Each planet has 4 stages of defense, which come as levels with the final level ending in a boss fight with a mother ship. In addition, each planet has three difficulty modes – normal, hard and extreme.

For completing each level, the game grants you some valuable loot you need to learn how to use in adequate moments. I mention this because it might be too tempting to use that meteor rain booster early in the game whereas it is quite expensive, and you might need it in the later stages, so don’t use it unless you’re desperate. 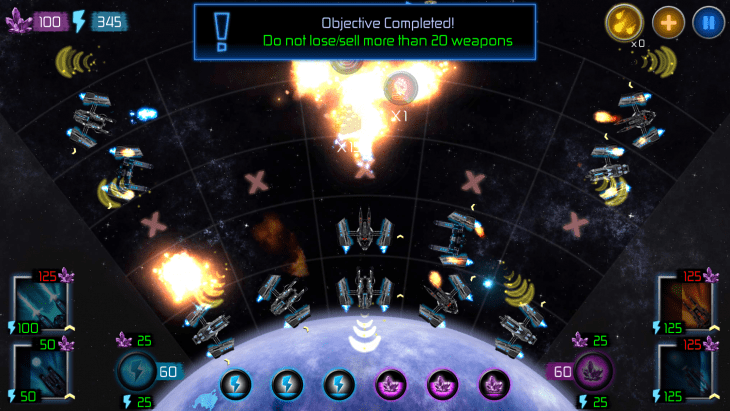 The game also rewards you with the upgrade points you can use during the stage to beef up the power and range of your spacecraft. Be picky as for when you use those because the bank of these upgrade points is one for the entire game. Spend them all in one planet and you might feel stressed during the next campaign since they are consumables.

After completing a difficulty mode on a planet, the game also awards you with a skill point. These are very few and far between, and serve to make permanent upgrades to your weapons. There are five upgrade stages per each weapon in total, and some get unlocked as you level up. 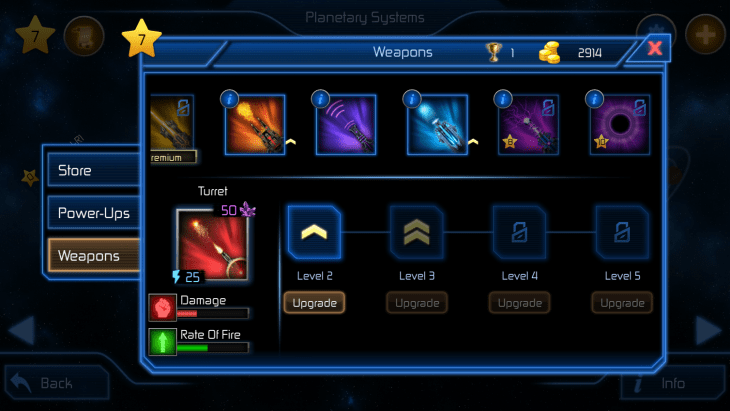 There are 14 weapons overall, even though you need to unlock them, and select few are available via IAPs only. Overall, however, there is plenty of room for the tactical maniacs to deploy different combinations of weapons. Besides, the restricting weapon slots per each level make you think even harder which ones to choose and upgrade per each particular planet.

The enemies become stronger, bigger and more spectacular with each new claimed planet, so filling the grid with your ships becomes a short-term triumph until you find the half of them destroyed in a blink of an eye. 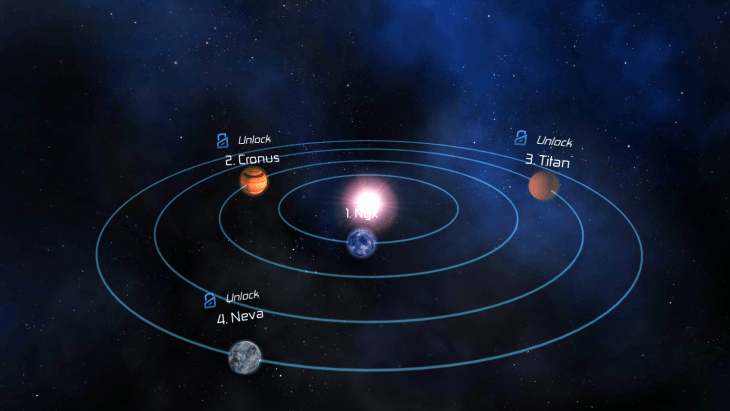 When you are short of the skill points and still need to upgrade a weapon, you can do so for the in-game gold, which you earn by playing or you buy via IAPs. There is also one other neat way to grind for gold – scanners. Every once in a while, after completing a difficulty mode on a planet, you are rewarded a scanner, which mines planets for gold. The scanners come in three ranges, and earn you little, very little and very-very little gold. Still, it’s a nice way to squeeze the funds out of the planets.

What I find lacking in this system is that the resources a player has left extra after completing each round do not get transferred to the next stage, but other than that the game is a massive black hole for the fans of TD. 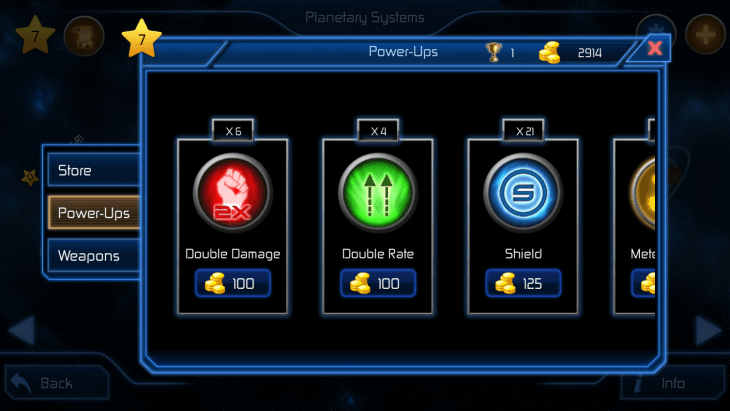 The graphics are spectacular and all-around impressive, with a great variety of ship designs, weapons and explosion effects, space and planetary backgrounds, UI and sci-fi soundtrack. Overall, the art work is fantastic.

The replay value is excellent, with 200+ levels, which entail three difficulty modes per each of the 15 planets currently available. Some two systems are available via IAPs only, and according to the game there are more levels to come. Considering it’s a free, totally playable game, Interstellar Defense is a no-brainer download for any TD, strategy and sci-fi fan.

Performance-wise, I have played the game on two devices – mine and my nephews’ when showing them the ins and outs of the game. I had no performance issues on an oldish Samsung Tab 3 running KitKat, but on a newer Samsung Tab 4 running Lollipop the skill points showed as -2418 or something when the game offered me to upgrade my weapons, but I was unable because of the odd count until I finished a planet. The game also seems like a serious battery drainer, so make sure to have a charger handy when you plan to indulge in some excessive strategic alien slaughter over this holiday season. 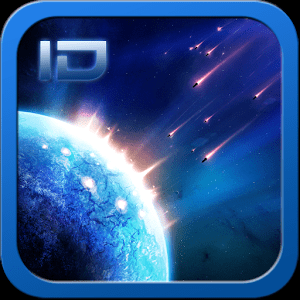 Interstellar Defense is a fun space TD, fairly deep, with just the right difficulty curve to satisfy the noobs and the experts. It’s freemium done right, so ads and IAPs won’t nag you if you choose to go all-free, but if you buy something (quite reasonable priced) you’d be supporting an indie. It looks great, is addicting and has short, fast-paced gameplay sessions perfect for playing on the go. It has a cloud save, but you can play it offline, too.