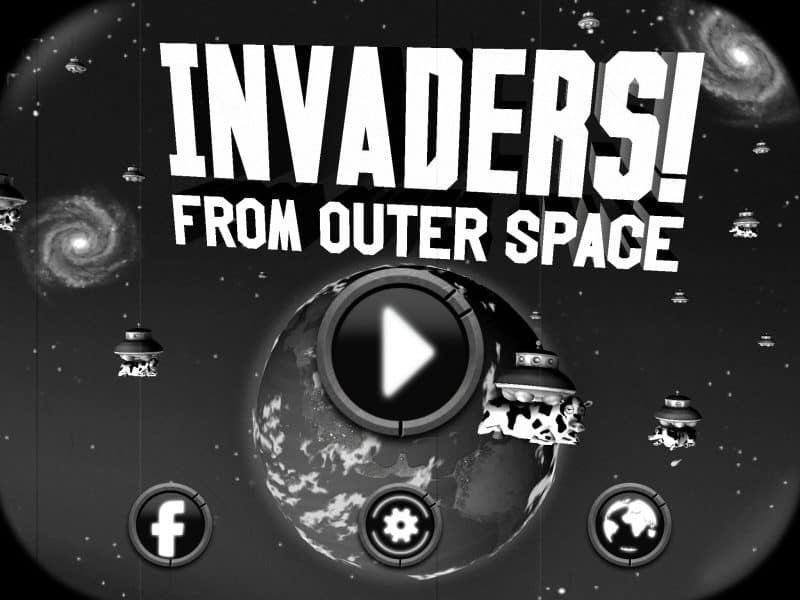 Go back to the 50’s with Invaders! From Outer Space, the latest game from Crenetic Publishing. This game is completely in black and white, and is extremely reminiscent of the classic Space Invaders game. There are 20 levels to play-through, but the buck stops there, as there’s nothing else to do except compete on the leaderboards with the campaign mode. It’s a mediocre game at best, and should probably be free.

It doesn’t look terrible, but there is nothing visually attractive about this game. There’s no lag or frame rate issues, which is a plus, but there is a major lack of variance. You play as the same little tank throughout the entire game (except for one level, where you’re just a stationary tank), and you battle against a very small variety of aliens. The background changes a couple of times, but other than that, you’re just repeating the same thing with a few more bad guys to fight against every time. 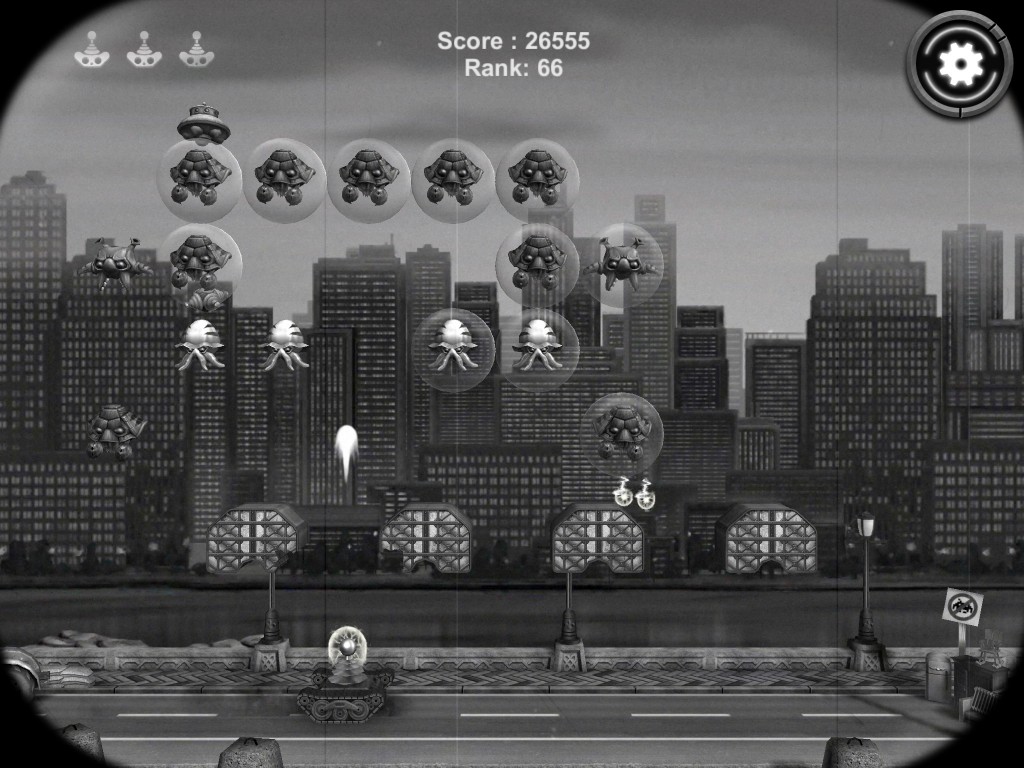 Honestly, this game ranks more at a 2.5 for me visually, but I did think the boss at the end of the game looked pretty cool — so I bumped it up to a 3. Still, Invaders! From Outer Space has some other issues holding it back, and the slight increase in visuals won’t make much of a difference in the long run.

Throughout the first 10 levels or so, the gameplay is almost non-existent. You could literally hold down the fire button and pass the first few levels, and after that you can still just hold it down and move your tank every so often to avoid getting hit. They try to change things up a bit by throwing new enemies into the mix, adding enemy shields, and destroy-able structures right above the tank. However, the new enemies don’t introduce any new mechanics, and pretty much the entire game involves avoiding bullets and firing bullets. 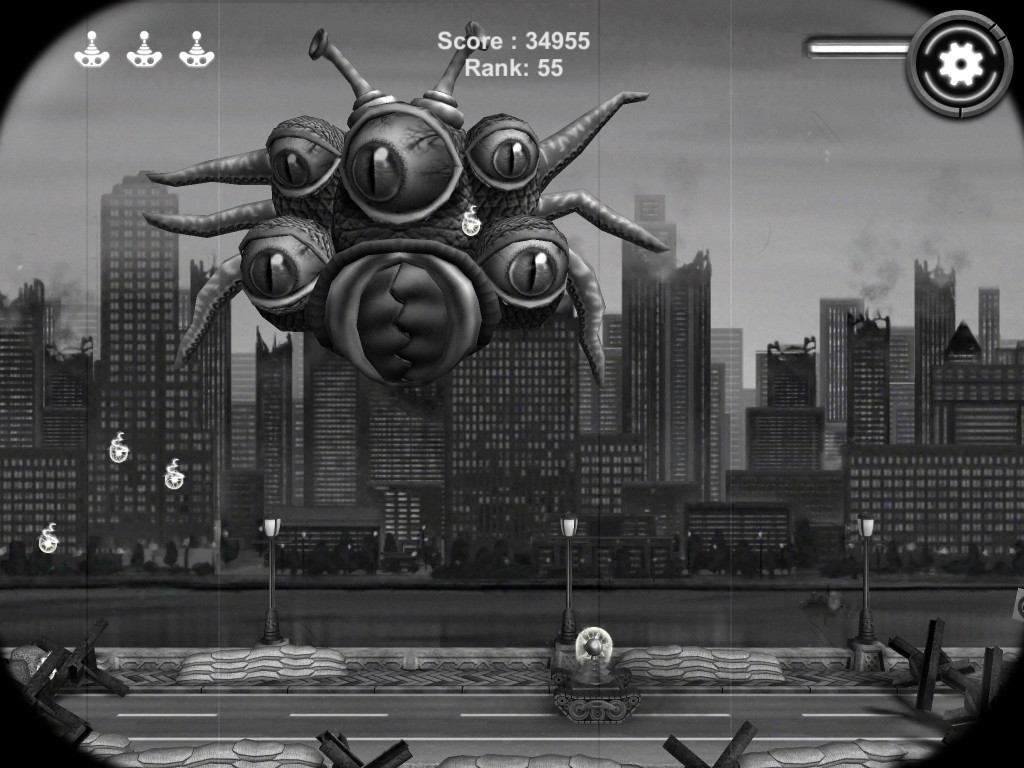 I was surprised that there wasn’t a single special ability you could use, and not even anything you could unlock or upgrade about your tank. However, considering how easy the game was, any sort of powerful ability may have just made things worse. There’s never any sense of urgency throughout the game either, as you can just die and continue where you left off with the same score in place. All I can really say is that it runs smooth, and it does what it’s supposed to — but it still sucks.

There isn’t much of an interface to deal with, and the menus are pretty ugly — even though this is more of a visual woe. You really only spend about a minute navigating menus, and the rest is spent cruising through the easy, mediocre levels. 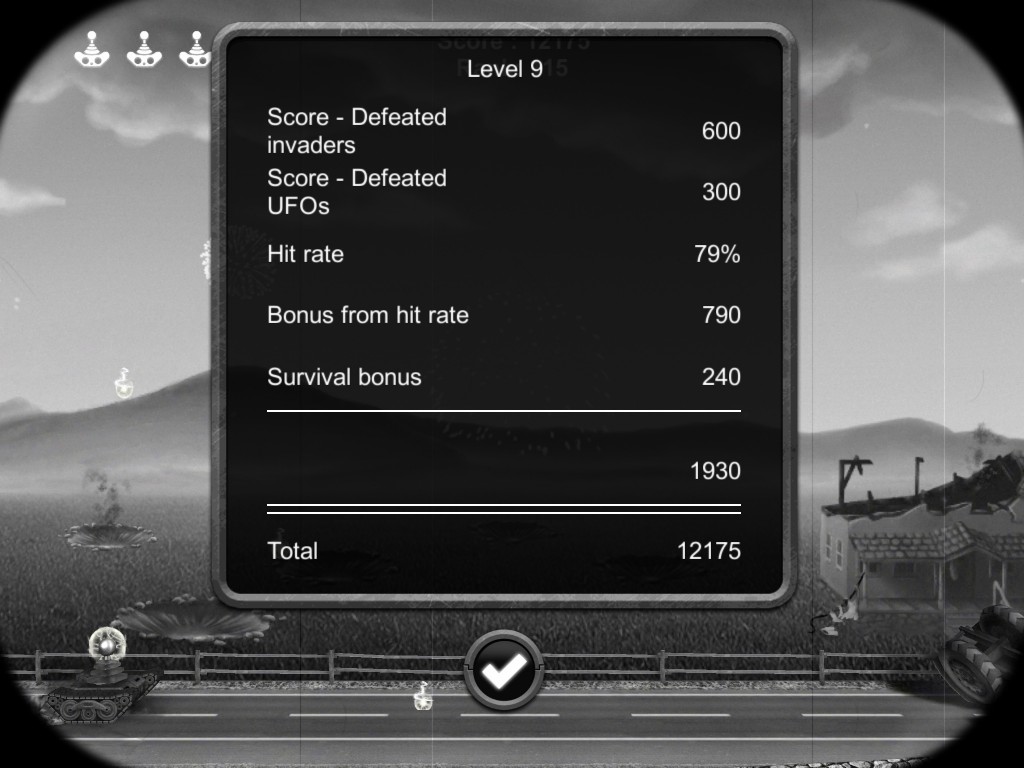 As for controls, they definitely could have been better, but they aren’t all that inconvenient. Basically, there are two small tap areas at the bottom of the screen to move your tank either left or right, and one massive tap area to start shooting. You can hold tap anything, including shooting, which makes it really easy to just fire off a bunch of shots while moving back and forth to dodge oncoming fire. It would have been a lot better to use two directional arrows at the bottom left screen corner, and a single fire button on the opposite side — but the game is easy enough without having well designed controls.

Any mobile game with a price-tag should have at least moderate replay value, but unfortunately, Invaders! From Outer space has a near non-existent replay value. The entire campaign is extremely short, and shouldn’t take you more than 15 minutes to complete, but the worst part is that there’s nothing to do after that. Surely they could have incorporated a survival mode, or at least made the campaign a bit longer than it was. Even though the game was only a dollar, it was disappointing to see such a lack of content. 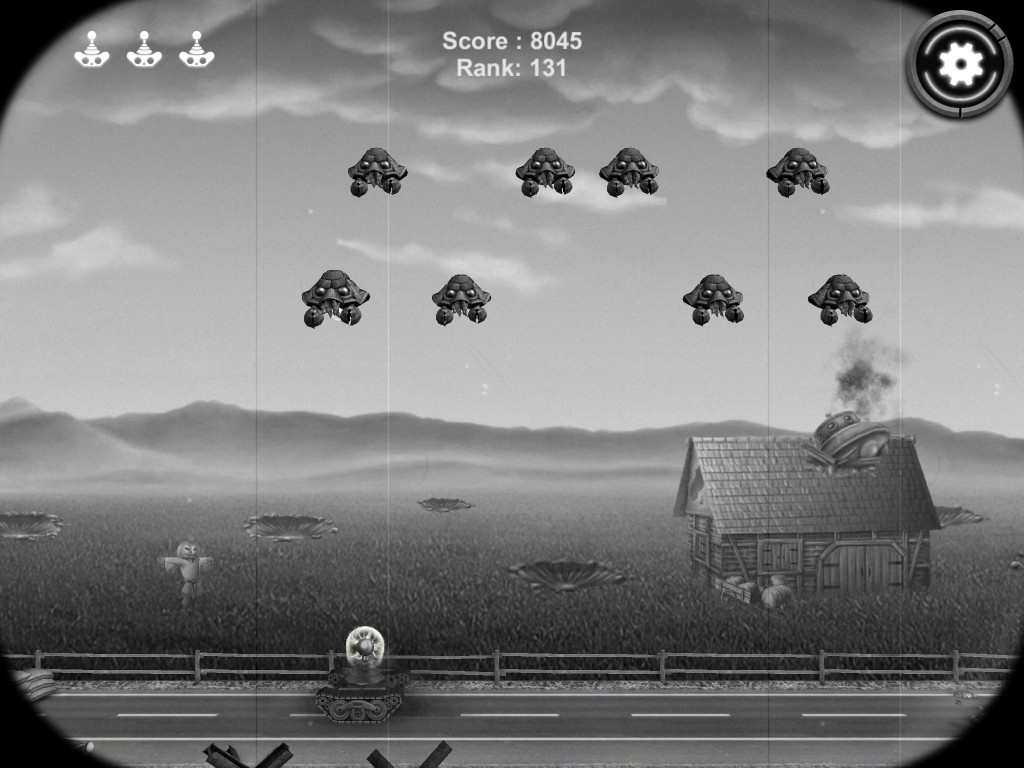 If there is anything to point out, it’s the leader-board, but I’m almost positive that it is broken. Your score accumulates throughout the entire game (even if you fail and need to “continue”), but I noticed my rank was fluctuating up and down, when it should have just been going up. Judging from the distance between scores on the leader-board, I know people were not passing me in real-time. Still, even with a working leader-board, it wouldn’t redeem much.

Although it looked like it might be a cool spin on Space Invaders, it turned out to be a disappointment. Unless short campaigns, lack of additional features, and stale game-play are all things that fall into your cup of tea — this might be for you. Otherwise, I’d recommend staying away, at least until it becomes a free to play game with a boat-load of advertisements.

Click here to check out Invaders! From Outer Space on the Apple App Store!

Click here to check out Invaders! From Outer Space on the Google Play Store!

Got something to say about the game or this review? Leave a comment below and join the discussion!