The lowly reviews for Glu’s latest James Bond release seemed troubling, so I gave it the benefit of the doubt and played it. To say that I was disappointed is really an underestimation of how bitter I was. James Bond World of Espionage is so bad it makes me sad. Really sad. Because I think of all the people who spent their time coding, designing, putting this load of crap together. Did they have a bad feeling about this, I wonder? Then I think of the franchise, and feel even sadder. Did you know Daniel Craig has had it of the Bondiana? “I’d rather break this glass and slash my wrists,” said Craig about making the next Bond movie, according to BGR. At this moment, this is how I feel Glu should have felt when making World of Espionage. They should have spotted the bad idea right when they got it. But no. Why is it a big deal this game is bad, you ask? Because 007 franchise is a big deal. It’s something as big as the 24 hit movies that brought billions of dollars in revenue. It’s something as massive as Connery, Brosnan, Craig and that heavenly Silver Birch Aston Martin.

First of all, it’s notable there was no media fuss around the release, which was suspicious, yet now we know why the World of Espionage launched cloaked in secrecy. It really does not need attention. In fact, it looks like it tries to sneak past major audiences and hide behind Glu’s Mission Impossible, or something.

Let us not talk about our expectations from a Bond game on mobile because the best 007 games were released on other platforms, and we have yet to see an impressive game under the franchise’s umbrella for mobile. However, Glu would have probably harvested less criticism if it made yet another Contract Killer clone, as it did for the Rogue Nation a few months ago.

Instead, they make it a card collecting and card battling title with the worst implementation and IAP system I have seen so far on mobile. You start out with a tutorial that shows you how to play, but there really is no gameplay in 007. You are supposed to collect the cards of the MI6 agents, but they are too expensive to buy more than one as you start. Then, you sort of send these agents on missions. 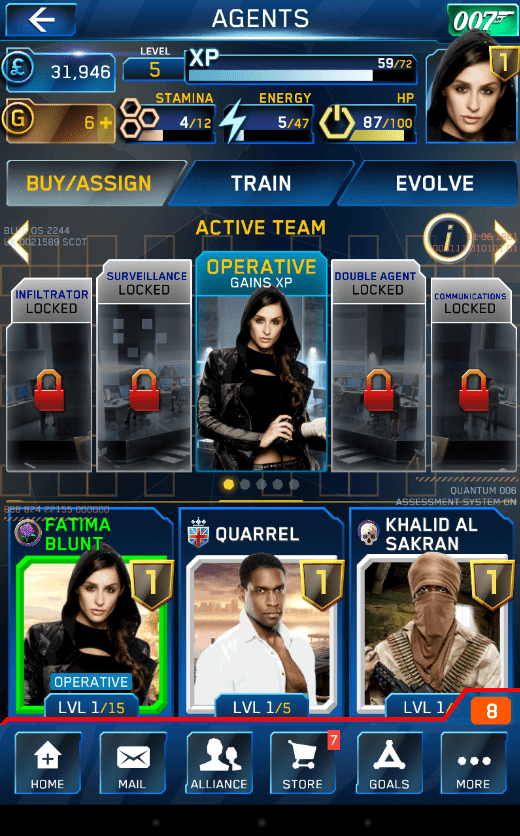 Open the map and see the available missions, then tap a mission, pay the entrance fee in something called G and start a mission. Completing the mission consists of several taps. For example, if you need to collect some intel, you have to talk to people. So, you are presented with a card of a girl in a vulgar outfit, and are given two options – talk or leave. Tap talk and see the outcome. You lost some stamina, you gained some XP. There are a couple of other stats that show up after every time you tap talk, or fight, or drive, or shoot. You might need to tap “talk” or “fight” or “drive” several times to complete a mission. Each time your stats will be displayed – some with a plus, others with a minus in front of them. Mission complete. Not even an imitation, where one card bangs against another in a desperate fight. 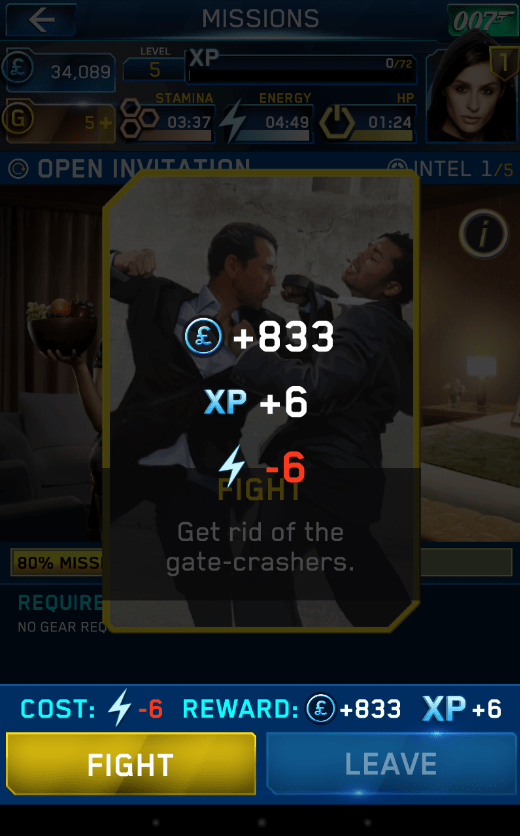 Some missions will force you to buy some items that you need to complete them, like a speed boat or a gun, or a swim suit. Then, there are bosses you challenge, and the challenge plays out exactly the same way as the missions – you see two cards opposed, and tap fight or shoot. Then you can duel other players and form alliances, but there is no difference “gameplay”-wise. 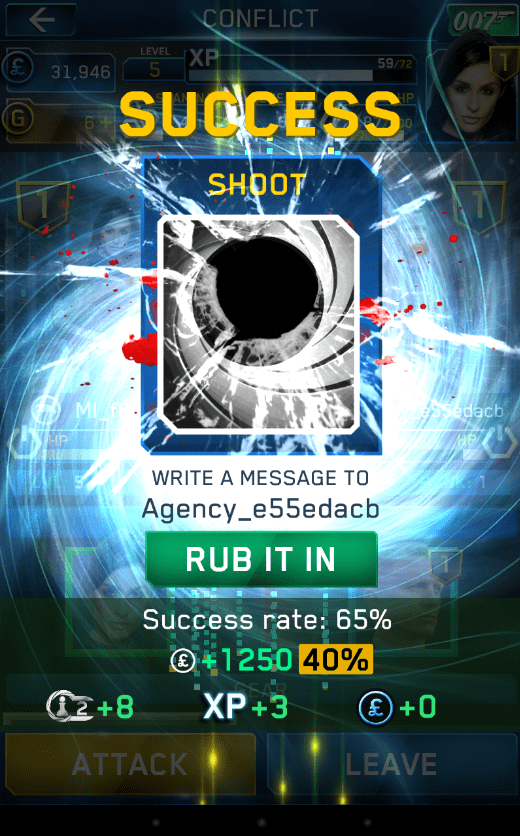 Provided the artwork is just the photos of Craig, Fiennes and a couple of other 007 stars of the past years, there is not much artistic value in the design. What really is irritating about this game is the total lack of things that would make sense in a 007 game. The missions are utter gibberish – go there, drink this, entice that chick, challenge that boss. The game fails to create a coherent story. Multiply that by the fact that 90% of characters and agents in the game are nobody in the world of 007, and you get a bunch of poker cards with half-naked chicks instead of hearts and spades. I don’t mind the looks of a girl in bikini and the last time I checked I was not a snob, but the artwork in the World of Espionage is just vulgar.

So, the moment I realized there was no story to follow, no characters to relate to, no gameplay to get hooked on, I bumped into a paywall. Suffice to say this happened within my second gameplay, and it was short. Ever since, each time I log in, my G count has not replenished one little bit by itself, and my energy meter depletes before I can finish one mission. So, I have to wait or pay. Even if it were a gorgeous game, a paywall this close and this evident is enough to send the developer a Black Spot. The shame is not enough.

As I browsed the user reviews, I found two favorable that said “you need to get the hang of the gameplay” to enjoy it. I tried, but it wouldn’t let me because my energy runs out after 3 minutes of “gameplay!” What is the fun in the gameplay where you tap, the game does some absurd calculations to your stats and tells you you have just battled a baddie? With no incentive to collect the cards or upgrade them because they are just nobody, an incoherent, meaningless story or the absence of whereof, this game feels like it’s been made up by Homer Simpson and Mr. Burns as they got drunk plotting a plan to get rich or destroy the world trying. 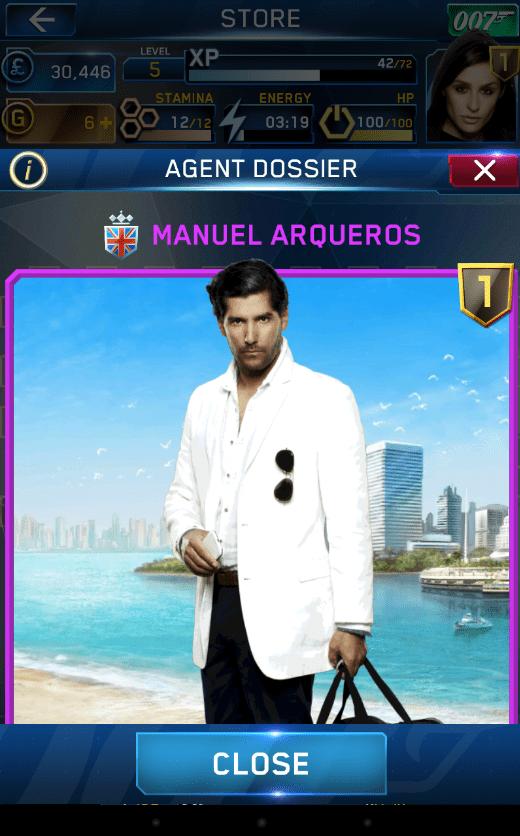 Glu has taken away even the slightest degree of user input from the gameplay. We have seen some good and bad CCGs, and I thought Panem Rising was a pretty mediocre one, but in comparison to World of Espionage Panem was a blast.

The game does offer a few gimmicks that are supposed to be in a game. You sort of collect your points for playing, and then assign them to your stamina, energy, offense, defense and health stats. Does it make any difference gameplay-wise? Not that I noticed. It’s a lame parody of RPG elements. They are just point values that show up here and there, but don’t do anything customization-wise or enhance your efficiency in the missions.You can buy items from the shop, like the guns, outfits, buildings and even some structures that generate money for you over time. However, the first item I bought had a 3-minute “crafting” time, read – timers galore. The second item I checked had 8 hours crafting time. I realize it must be some high-tier ammo, but 8 hours in a game as boring as this?

The multiplayer is downright uninspiring, and rewards you with the same points you distribute among the values. Irrespective of what you do in the multiplayer, duel other players or create an agency and climb the leaderboard, the action still remains pointless – tap fight, watch the stats, distribute some points, repeat. There does not seem to be any incentive or goal to move to, except for a numeric value. No brain challenge, no Bond spirit, no stealth action, or at least a cool gimmick to hang on to. Overall, 007 The World of Espionage has as much or as little connection to the Bond franchise as garlic to ice-cream. 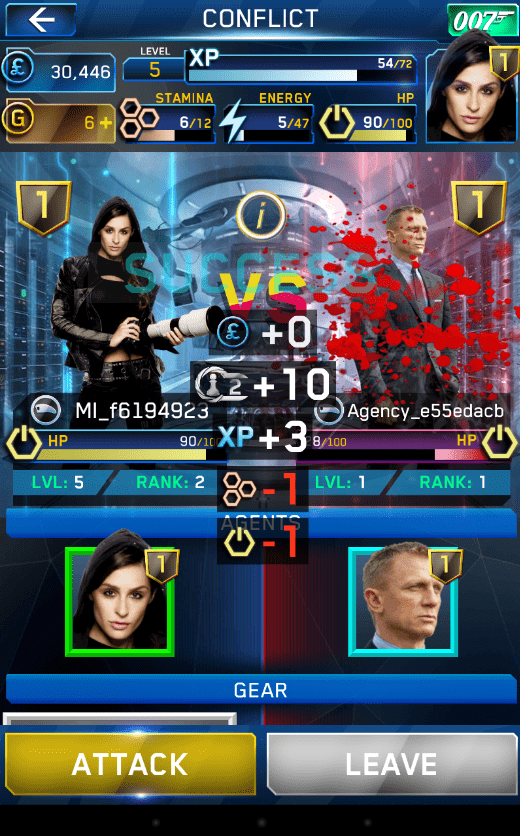 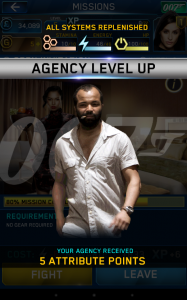 Rarely do I use the word boring when I review games because I like to give each game a chance, and find its virtue, even if it’s small. However, World of Espionage is the most boring, motionless, uninspiring and lackluster spy CCG stripped down to its vulgar nudity, which is a no-game, but a shiny flip book jam-packed with IAPs.

Glu would have been better off making a Bond re-skin for its Contract Killer Sniper, as they did for Rogue Nation. Name the location MI6 headquarters, tell us that M is taken hostage by Spectre agents and we’ll be head over heels shooting the same bad guys we shot in Rogue Nation because who cares about the bad guys? They would have been much better off if they did a tilt or swipe racer, where you actually get to race that Aston Martin dodging RPG rockets, and have Pussy Galore, Kissy Suzuki, Bambi and May Day reward you with trophies. And Elektra King, the best Bond girl ever. Even a clicker game (Cartoon Network MAD-style) where you tap as fast as you can to make Bond shoot the enemy could have been a hit with a little bit of creativity. A Dim Light kind of stealth sneak-your-way past the bad guys game could have been wonderful. Anything, but World of Espionage CCG. Anything.