If you can’t help but feeling something is missing in your life, try Jelly Jump – this must be it. A superb twitch game from Ketchapp is addicting as hell and equally hard. When I read user reviews boasting they reached 106, I gulp, weep and blame it on my inherited bad eye-hand coordination. This doesn’t mean I want to quit playing – no way!

The first time you launch the game, a machine starts pouring liquid jello into a form, and a second later you get a nice little jello cube, ready to play. Tap the screen and start playing.

Here is how it goes. It appears that the little jello guys are in trouble – their fantastic sci-fi world is being flooded by a liquid black substance, which might be water, acid, oil, or worse. It looks like oil, though. Jello’s world is a beautiful set of blocks that go up to the sky, and since we are dealing with the flood, your jello cube needs to jump up. Tap to make it jump – easy as that.

However, this sort of emergency cause the Jello city to start closing down the gates, or platforms. Whatever these are, they are closing in fast on you, and once you land on one, the other above your jello starts sliding shut.

Your jello will drown in oil, get smashed by the platforms, and its death scenes are full of drama, as you watch it suffocate, bubbling liquid rising above its agony. It’s pretty heart-breaking, actually.

Don’t let the seeming simplicity foul you – the game is hard. Even though the platforms are not randomly generated, and are always the same, which lets you memorize their mechanics, Jelly Jump is still painfully hard.

That said, a 10-year old kid can do better than a 35-year old nerd simply because it’s a reflex game that tests your coordination – just that. 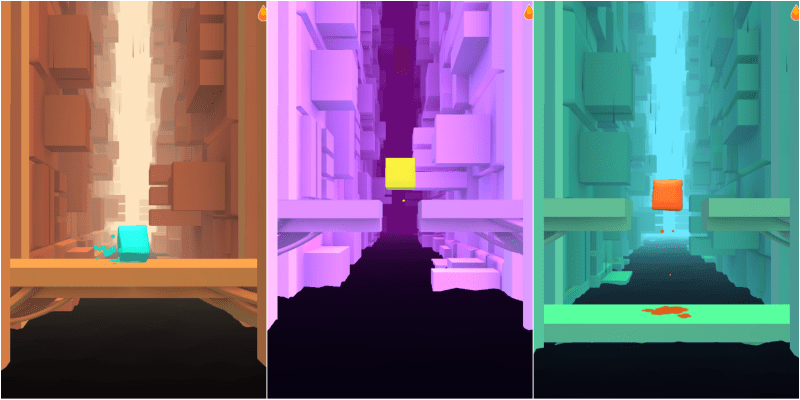 There are no levels, and as in most Ketchapp games, you play to score higher – higher than yourself, higher than folks on leaderboards.

Some time when you hit the 10 mark, there will appear tiny drops of additional jello. Each drop gives you ten points – you can see that count at the top right corner of your screen. Collect 20 of those, which would amount to 200 points, and unlock other jello forms. Not to say it is impossible, but it is darn hard.

There is a gaming controller jello, a plus sign jello, a stool jello, a spider jello, a T shaped jello, and a variety of others. I have read some users unlocked 18 shapes, which is pretty impressive – I have yet to unlock at least one.

The different shapes are pretty much the same in mechanics, with minor differences. Some are easier to control, others present an additional challenge. A spider jello, for example, is not the most efficient one because its legs often get stuck in tiny spaces when the platforms are closing – something that doesn’t happen with a cube.

The game is free, ad-supported. One IAP removes ads. Overall, the ads are non-intrusive because they are not video ads. I haven’t had a single ad interrupt my gameplay, so it is safe to say the system is well implemented.

If you have enjoyed games like Smash Hit, Impossible Draw, Duet and Hex 99 – Jelly Jump is right down your alley. It is in 3D, with awesome color schemes that change according to what seems like a pattern – a few replays in the same color scheme. The jello color changes with the color of environment, but you can’t choose a color scheme you prefer, which would be nice because I get horribly clumsy with red.

What I love is how the jello makes sounds as it jumps and lands, leaving splashes of squished jello where it lands. The renditions and effects are spot-on.

What makes Jelly Jump special to me is the soundtrack. If you are like me, and music makes a huge difference between enjoying the game and hating it, you should check out Jelly Jump. It is smooth, tripping, relaxing and sci-fi at the same time – just in line with Smash Hit and Impossible Draw. There doesn’t seem to be a soundtrack available anywhere to buy or download, but if or when it lands, I sure want it. It does go in loops, but they are neatly patched, so you basically don’t notice them behind the frantic gameplay. 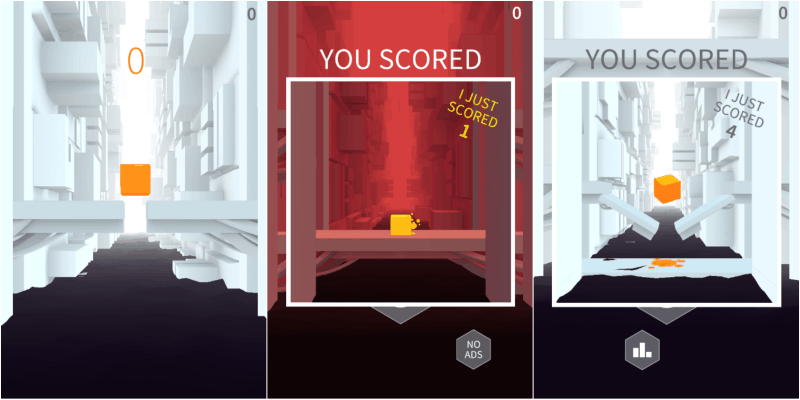 The most difficult part here is the perfect timing. While you can get used to how the jello jumps, coordinating its moves with the different types of closing platforms is not so easy. The fact that the platforms remain on their places with each replay gives you a little tactical advantage if you memorize the pattern. 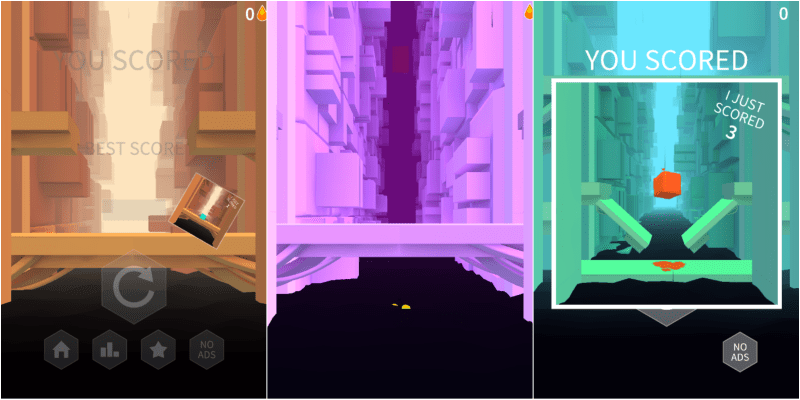 Ketchapp has been doing very well with its recent Zig Zag and Skyward, and Jelly Jump is an awesome entry in their production line, although a lot more difficult than the said games. With its accessibility, hard challenge, awesome design and fantastic soundtrack, Jelly Jump is highly addicting. Top that with a totally free game with non-intrusive ads, the ability to play offline and hard to earn, yet very rewarding new jello shapes, and you get your next favorite go-to reflex time killer. The game is simple, entertaining and somewhat hypnotizing when you play it 30 minutes straight, and never does it make you want to bang your head against the wall. Instead, other player’s high scores and their impressions from other jello shapes makes you want to do better. Get it – it’s a hit. It actually is #194 in Top Free Games on Google Play now, right where Duet is.