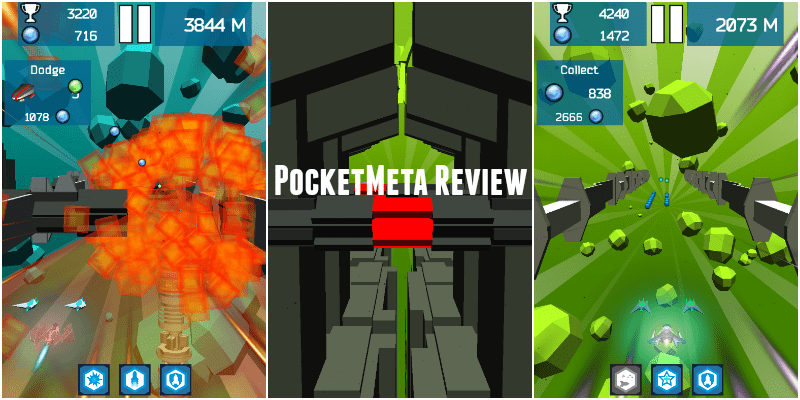 Last year, I heard some hardcore gamers claiming rail shooters were obsolete and officially dead, and then came Smash Hit and literally smashed that stance into pieces. This year, let Kaiku be the game to bring the most badass sub-genre of arcade games back onto your mobile device. The game development was apparently launched about a year ago, and it was last year that the game soft-launched in select countries. This March, however, it finally landed on three play stores at once – something few teams, indie or AAA have the resources to do these days. There must have been a shortage of media attention back then, and we let this little precious pass by unnoticed. No more. This game rightfully deserves your attention.

Kaiku is a three-lane rail shooter that takes you into a toxic digital world, which reminds me of Tron’s grid. You take a ship from a great selection available in the hangar and venture out on a deadly chase against the evil AI, Kaiku. The latter looks like a giant wasp with pink stripes, very predatory.

The swipe controls are straightforward – swipe left and right to change lanes, tap on the enemy to shoot, and swipe up and down to open the gates. You need two hands to control the game.

There are several objectives in Kaiku, but only one of them is crucial – pass as many levels as you can. The other objectives include collecting the orbs, dodging other ships, taking them down, taking down the enemy drones. Before you know, the game introduces new elements – incoming ships that come from behind, and the only way of knowing such ship is coming is a very explicit red stripe that illuminates the lane it rides. Once it appears, you have a couple of seconds to get your ship off that lane.

Once in a while, there will be a power-up on track, and provided they cost orbs when you buy them, the ones that come free in the gameplay are very welcome. 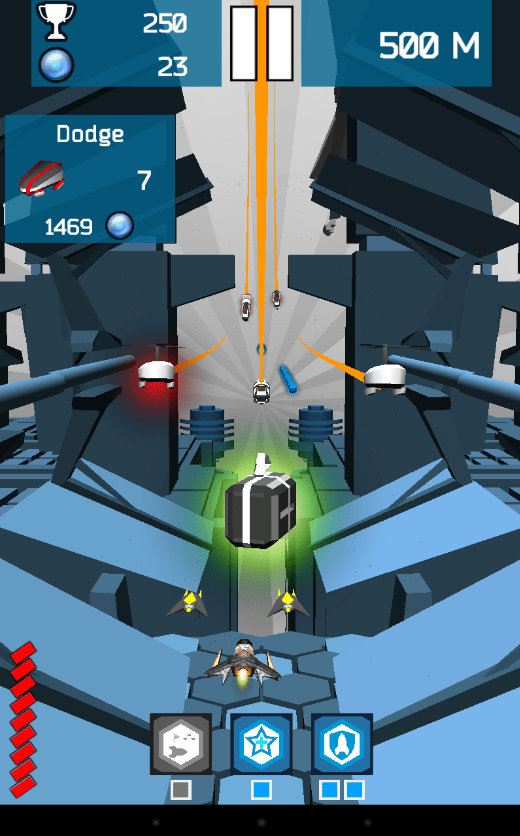 Sometime at level 3 you face a new challenge – the gates. They might not seem like much, but wait till you get a dozen of them, one by one in short succession. Thing is you have to swipe exactly where the red stripe is, and when five gates have the stripes in different places, it’s a tough call to pass the level.

Once you die, you will have a few seconds to decide whether you want to pay in orbs to revive and continue the run. The game only offers this revive once per run, so the second time you die – it’s for good.

The next time you start, you will be able to pay in orbs and start from a checkpoint, or restart from level one. You need to make it to level 5 to unlock the first checkpoint, then 7, then 9, and so on. Needless to say, the further you wish to restart the run, the costlier is the checkpoint. 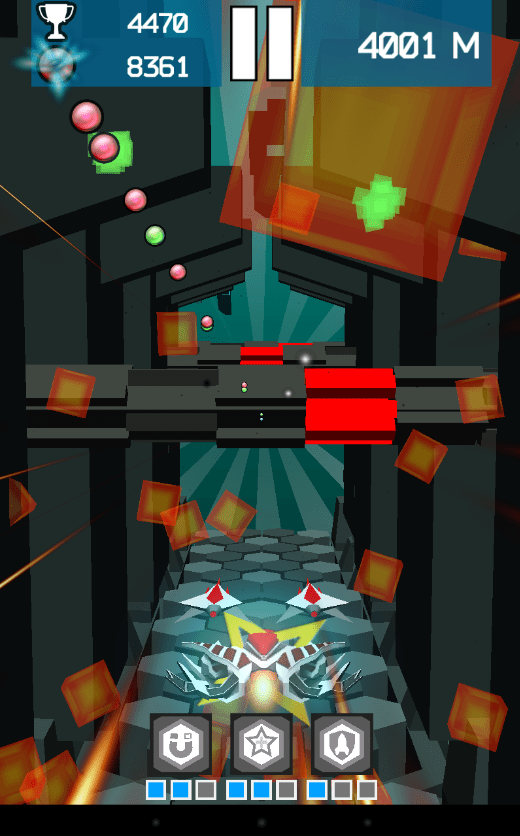 The ships in this game are dubbed Dataships, and come in ten variations – 2R-ST, Pisces, Sagittarius, Aries, Taurus, Leo, Ghost, Glider, Regent and Overlord. Now, I have a question – what happened to the rest of Zodiac?

You have the simplest 2R-ST unlocked by default, obviously. The ships have stats, and while they may seem the same at first look, they differ in reality.

So, all dataships have stats like dodge, shield and plasma. You can upgrade these stats, and it depends on the ship type how many upgrades are available per each stat. The rest of the abilities are special and define the specs of each individual ship. This in turn defines the play style pertaining to each machine, and you will have to learn them to find the one you like best. Since unlocking the ships is not an easy thing, here are a few introductory tips you might need to avoid spending the precious orbs on unnecessary purchases. 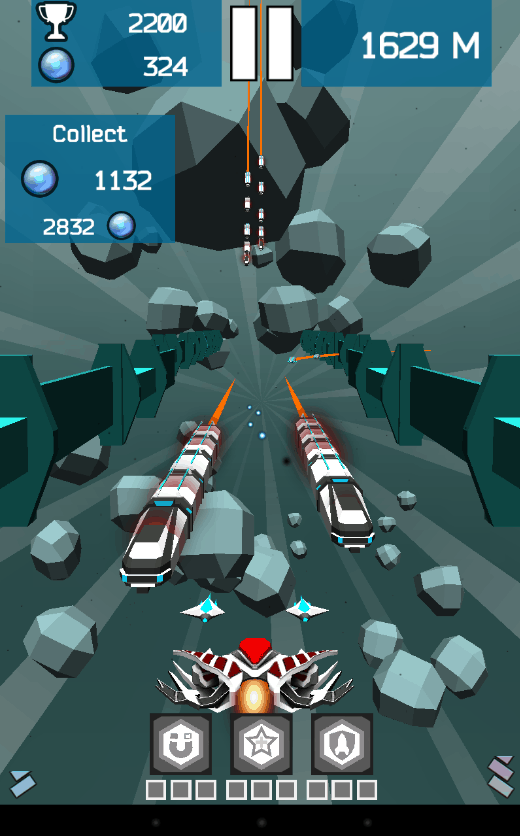 For example, if you prefer to dodge enemies and collect as many orbs as you possibly can, choose an aircraft that has magnet and/or multiplier, and increase these specs, as well as its maneuverability – dodge. The thing is, the dodge stat is 0.5 sec by default for all ships. You will see how slow a ship seems to react to your swipes, especially in times when the enemy gets too close. It’s not a control lag; it’s an intentional delay, a default characteristic of a ship. You can improve it by upgrading the Dodge spec. Some ships have Dodge you can upgrade 2 times, some 3. Each subsequent upgrade is more expensive.

On the other hand, if you want to take out as many enemies as you can, choose a ship that has a drone, a bomb or a booster, and upgrade those. Again, Dodge ability is indispensable.

So is Shield in close call situations, when you just need to warp your way through a dead end of enemies and gates. 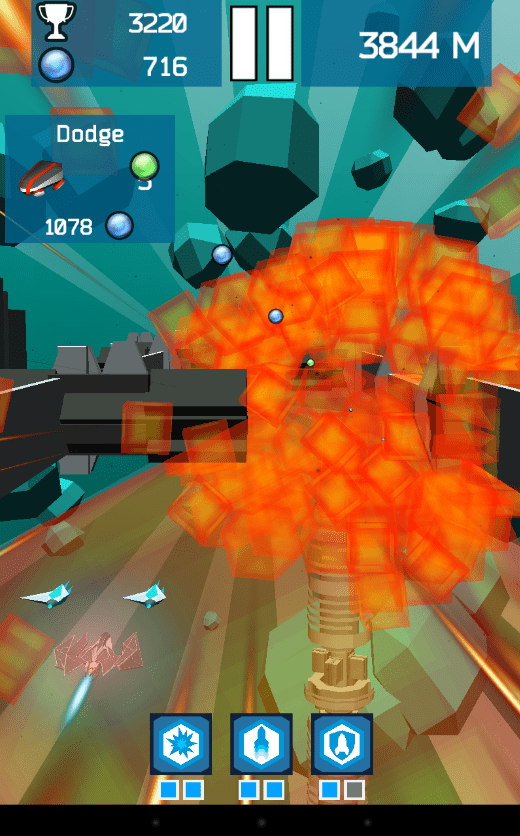 You might get a feeling the game is too tweaked to cater to the IAP department, and partly it is true. Yet, the gameplay is so enjoyable and the game overall is so good I am willing to support the indie devs for the effort.

As I said, everything in this game costs orbs. You collect orbs by playing. Hence, it is not such a tedious task when you grind for an in-game currency while enjoying an excellent twitch racer. On the other hand, I see no way being able to unlock all the ships by simply playing.

So, when you choose to buy something, you will be buying white cubes, which translate into orbs. 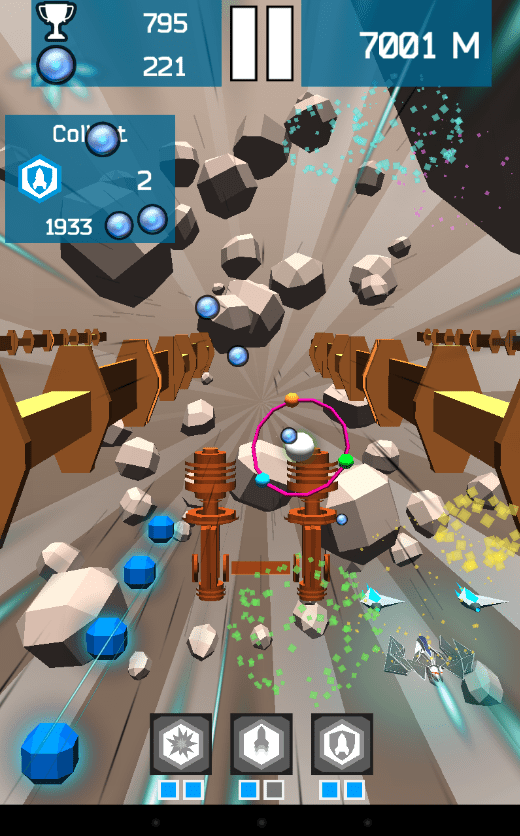 The IAPs are not that many, however, and come at a very reasonable price if you aim at the ships with the prices set in orbs. Ideally, you need to make up your mind which play style suits you best and buy or grind for that one specific ship.

The two coolest ships, Regent and Overlord cost 229 and 499 sugar cubes respectively (they may be boxes or crates, but since they are white and cubic, I name them sugar). So that you get an idea of how that translates into real money – 25 cubes cost $1; 60 cubes – $2; 2000 cubes – $45. There are a few intermediary options, too.

The cubes and orbs also buy you upgrades and power-ups, the options to restart from a checkpoint and revive once per gameplay. 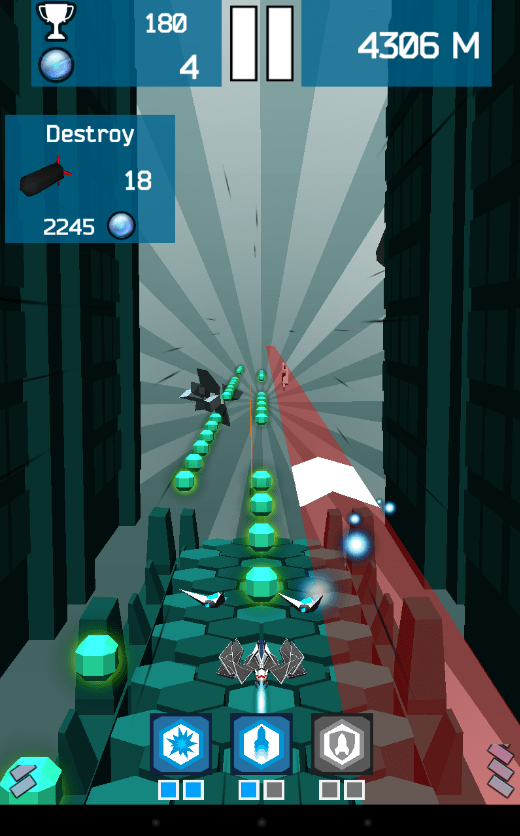 There are also lives, and this is the one element done with respect to the replay itch. By default, you get 10 lives being level one. You level up as a player, too, and each subsequent level adds one life to the max amount of lives you can have. One life regenerates over the course of 10 minutes. I have been playing for three days now, and have never ran out of lives at all. Every time you level up, your lives get replenished, too. Good.

Wrapping up the IAP section revision, I’d say a premium version of the game would be awesome. Kaiku is easily worth $2.99, so investing a few bucks in IAP is a good cause, supporting the talented indie teams. On the other hand, these goodies are consumable, and can run dry very quickly under heavy gaming. And everything about Kaiku suggests you can spend a good while with it. I am.

The current freemium model lets you play without paying, but unless you are very good at frantic twitch racers, you are doomed to splash in the first five to seven levels without spending orbs on restarting from checkpoints. Unlocking the cheapest ship for 30.000 orbs needs a good time investment, too. 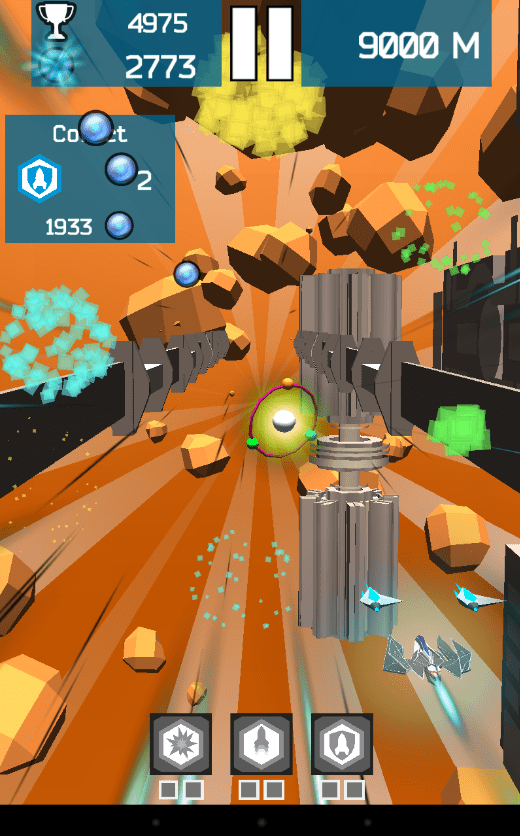 The initial couple of levels are moderately challenging, and then pretty quickly everything turns into a hot mess. The incoming flying trains come in batches, the sneaking ships catch you off-guard from behind and come two at a time. All of a sudden, a dozen of gates come in lightning fast, and this is where the upgrades make the difference between life and death. So, having a few bombs and shields will get you through.

The fans of the reflex-based games will love the challenge while the casual players will be able to enjoy and master their skills and see how far they can go.

Besides levels, Kaiku also offers mini-missions. Basically, you don’t have to complete them, or you complete them without even realize you do, but if you pay attention at the incoming Comms when you launch a new game, you might spot the objective of each new mission, like shoot 10 ships before collecting orbs, and the like. 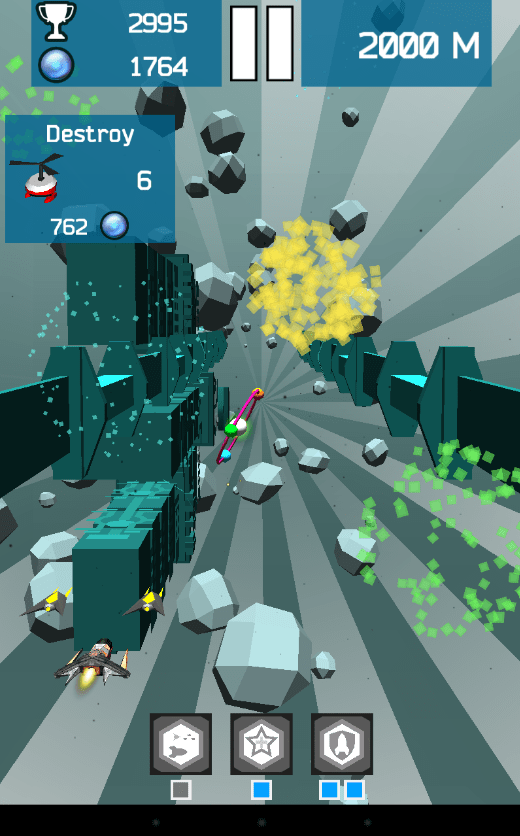 The replayability is very high because the gameplay is accessible initially, which is good for the casual players. Then, the difficulty ramps up, which is perfect for the twitch fans. The visuals and the simple controls, as well as the leaderboards and the challenge to unlock yet another ship keep injecting that addiction substance into your bloodstream. In my case, the game has instantly made it to the top list of my time killers as of now.

Design was the first thing that drew my attention to Kaiku, and I was right – the game looks fabulous. If you enjoyed the games like Smash Hit, Hex 99 and Impossible Draw, you will certainly love the unique feel of Kaiku. Its bright colors and blocky particles look sharp against very detailed spaceships and trains, so the overall eclectic image is intense and eye-pleasing. I love the soundtrack, too. The only thing that could have been better is a different approach to color-coding the levels. Currently, each level has a specific color palette, so when you replay frequently starting from level one, the same colors get a tad boring to race through. On the other hand, if the levels were randomly colored with each new replay, it would have added a lot to the replay value. 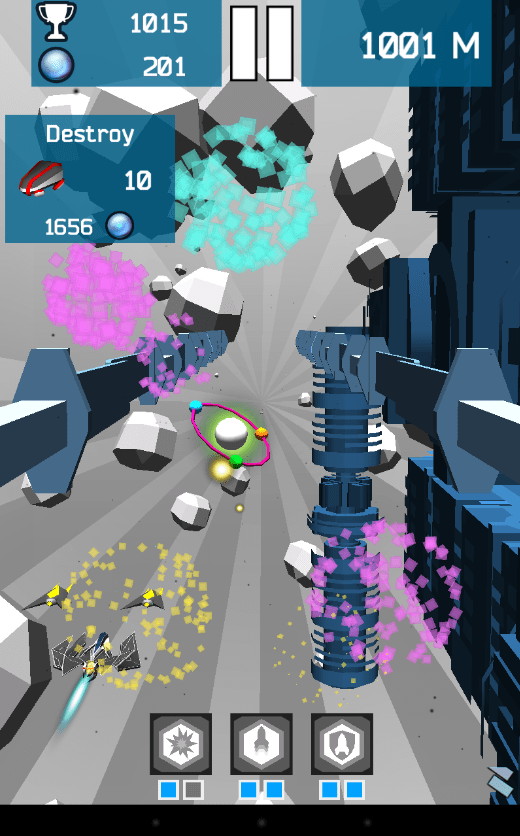 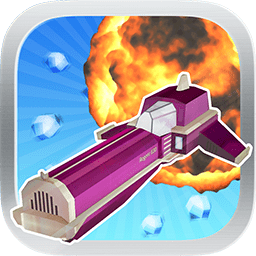 Kaiku is very good – addicting, spectacular, and intense. It is a must-try rail shooter, and a hardcore one, if a bit hindered by consumable IAPs. A premium version without IAPs and with all ships unlocked would be delightful. Even as it is now, freemium and hard, it has a strong personality to it, its own unique style. Clearly, a lot of love and hard work has been invested in it, and we love the result. Get it.