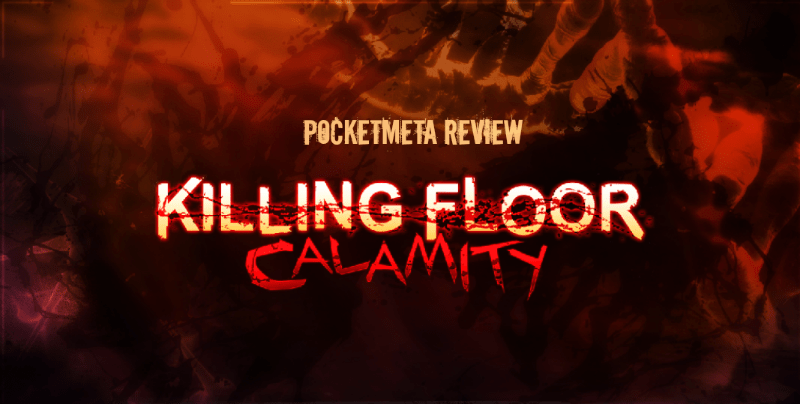 Original Killing Floor was a mega-hit on PC, and if you are familiar with the Tripwire’s awesome first-person shooter, you’ve got to have the love for its mobile port Killing Floor: Calamity. It did not make the transition unchanged, though, and the main difference is the third-person top down view on mobile instead of the first-person perspective of the original. Multiplayer is also missing, which is a bit of a letdown at launch, since the knack of the Killing Floor was that couch combat multiplayer you could enjoy with your friends, watching each other’s backs and switching guns. Alas, the local multiplayer in Calamity is only available for Nvidia Shield and Nvidia Shield Android TV for 2 players only, but I am confident Tripwire will be expanding the feature set of Calamity, provided they see the need of whereof. 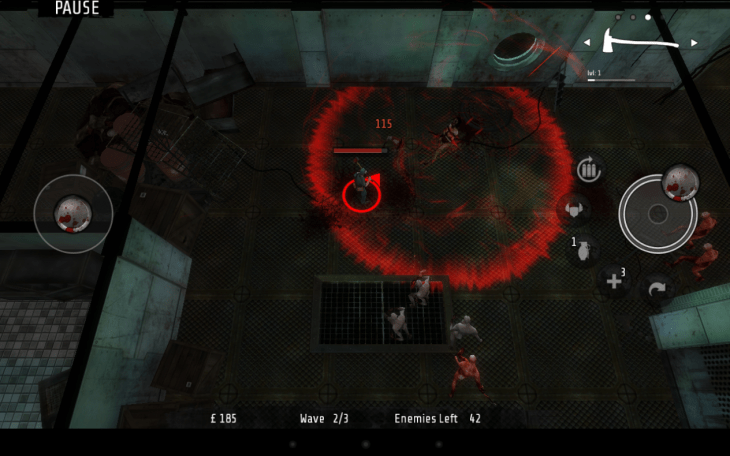 If you haven’t had any experience with the original PC version, better yet for you. Killing Floor Calamity sees you taking on the role of one of the military fighting the onslaught of zombies. The British accent à-la mode briefs you during your introductory Tutorial missions, showing you how to move, dodge, aim and shoot, change guns, throw grenades, catch reloads and revive syringes, shields and whatnot.

Story-wise, you are somewhere in London, on a military or research facility, where cloning experiments went horribly wrong, and the resulting biological material is now dead-walking, toxic ooze spitting, munching on the flesh of the living and all that 28 Days Later jazz.

You have a selection of characters – 7 to be specific, including the Field Medic, Support Specialist, Sharpshooter, Commando, Berserker, Firebug, and Demolitions Specialist. Notably, you can pick any of them and play all you want all the way through, or picking them in random order, trying your hand at different play styles and weapons types.

The said weapons are abundant, and even though you start off with a basic handgun, pretty soon you generate enough British pounds to buy yourself a better gun, full ammo pack and a secondary weapon. It can be anything you like, from ax to crossbow, or flame thrower. Each character, or Perk as they call them here, has a specific set of weapons, but it does not mean you can deviate and buy something fancy.

For example, field medic’s main “weapon” is a med syringe, but it does not stop him from wielding a shotgun, MP7M or other sorts of grenades and something with a sinister name Schneidzekk Medic Gun. Hunting, combat, AA12 and HSG-1 shotguns, welders, 9mm, 44 Magnum, MK23, LAR, crossbow, M99, AK47, M4, Tommy gun, chainsaw, knife, katana, machete and a Dwarf’s ax is by far an incomplete list of weapons topped with grenades, vests and the mighty one – zed eradication device. 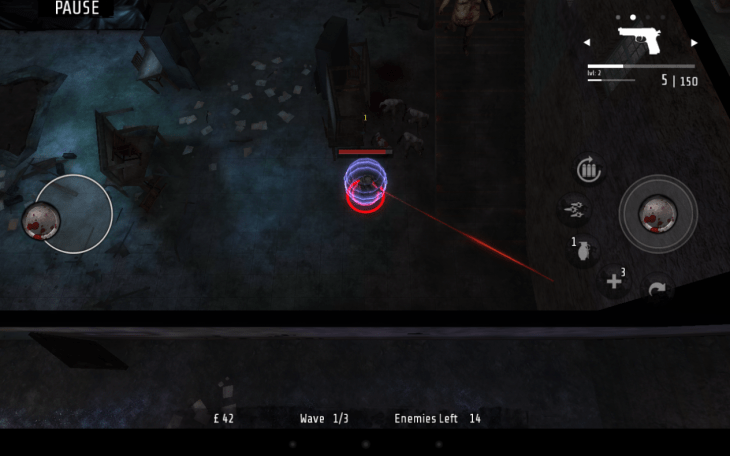 The spooks here are called Zeds, by the way. It’s difficult to say whether the invented verbiage is appropriate in video and mobile gaming, and at first it might be confusing why the characters are perks and why the zombies are zeds, but you get used to it pretty fast, so no big deal. However, it’s a lot like watching the Cloud Atlas and trying not to think it sounds like Despicable Me minion gibberish. 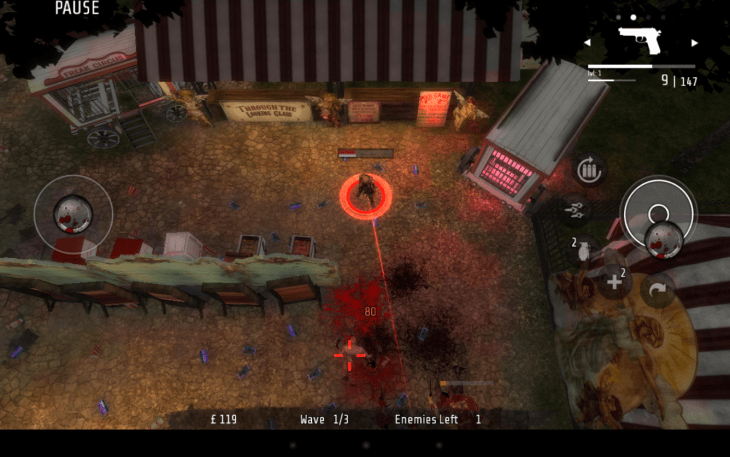 Now, come the locations. Calamity comes with 9 maps and three gameplay modes each – short, normal and long. The maps have been elaborated with the mobile top-down view in mind, and include Horzine Labs, Reactor, Isolation, Rooftop, Hysteria Lane, Offices, Offices indoors only, Carnival, Industrial Madness and Random.

Notably, you can choose any map, any character and any difficulty setting without having to unlock anything, which is a major advantage. However, you can’t just come out against the zeds with an ordinary hand gun in the longest and hardest difficulty setting and hope you make it through from the first try. You do have to grind for the British pounds to upgrade your weapons, ammo, buy a vest, some syringes, and gain enough XP to play it rough.

Overall, the progression is enjoyable and quite fair, and you can upgrade each of your characters to level 20. Never do you feel pressed to grind too tediously, nor is there a paywall since there are no IAPs as such.

The difficulty options include Beginner, Normal, Hard, Hell. Game length – short, normal, long. Briefly, these settings are more than enough to satisfy a beginner and a long-time Killing Floor fan.

A single-player is all you get for now, unless you and your buddy are sporting Nvidia Shield devices, in which case you can enjoy a local two-player co-op on Nvidia Shild TV. The reason I whine about the absence of real multiplayer for the rest of mortals is because it (multiplayer) was, and is, one of the best things about the original. Hopefully, the developers are considering expanding the gameplay to the co-op and online multiplayer modes. 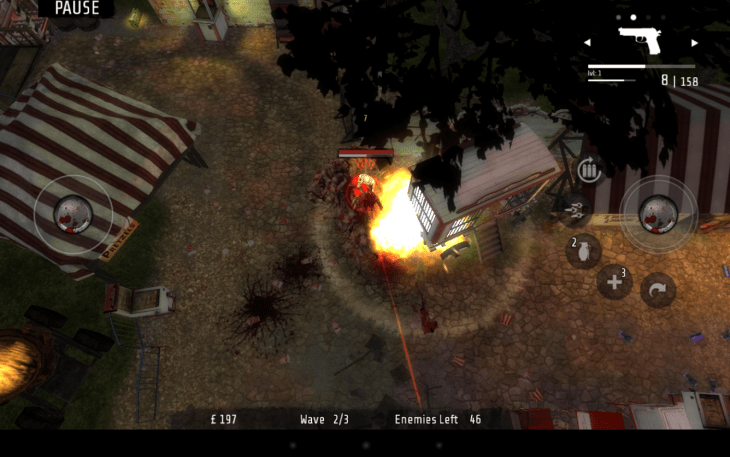 If anything, my major woe with Calamity is the control scheme because I was using the onscreen buttons. It works fine, don’t get me wrong, but the right-side button is a mess, and if you have the Hulk fingers you may understand what I mean. Besides, I utterly hate the movement part. Here is why.

The left-side button is responsible for moving; the left side is responsible for everything else, basically. While you can move whatever direction by using your left-side stick, you also need to turn in the direction you want to move. Otherwise, you are moving slowly because ya know.. moving back to front, or side to front is kinda inconvenient. 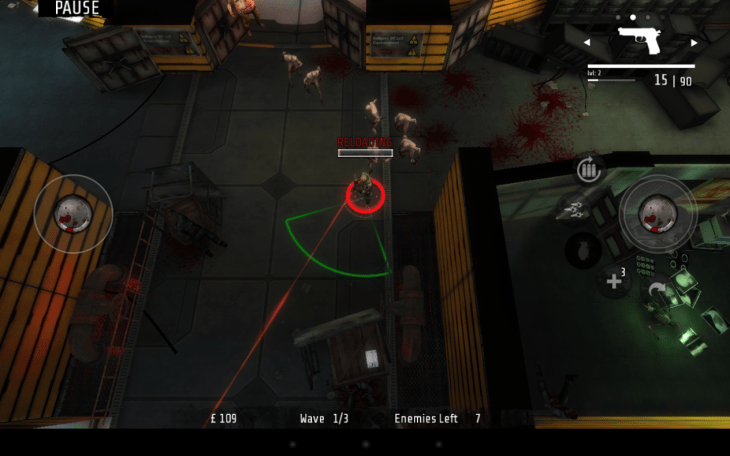 This affects the speed of your fleeing the zeds and chips away from your attention when you need to move and shoot. In addition, the shoot feature is incorporated into the right-side stick, so you have to pull it in the direction you wish to shoot to aim and start shooting. This is the same button you use to turn.

Moreover, the right-side button is surrounded by a multitude of smaller side buttons that are responsible for reloading ammo, or taking a shot of healing injection, or throwing a grenade and such. Often times, I found myself tapping those by mistake as I was learning. Sometimes, you want to just sneak past the zeds without alarming them, but when you want to do one thing, and do another by mistake, it messes up the plans. 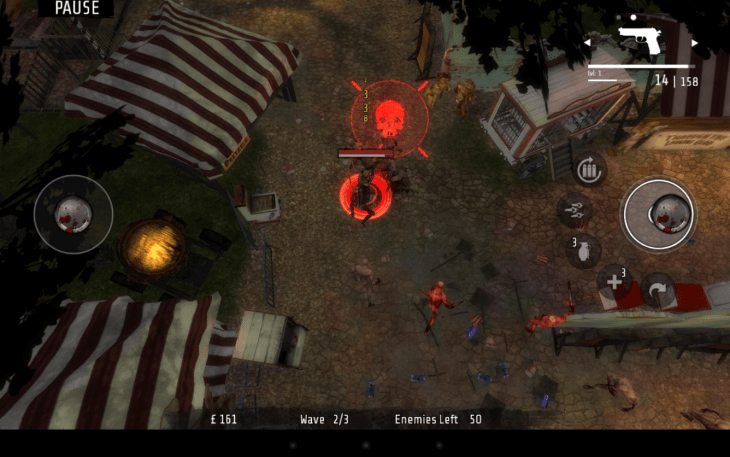 In other words, the controls take some time getting used to, and the need to turn face front to the direction you are about to move is a mechanic I find irritating. Can the character just turn automatically? Maybe it would affect the mechanic too much, and this decision is the only reasonable one that preserves the original touch, but I still dislike it.

The game supports external controllers, but a selection of them only, so read the user reviews because some report the Bluetooth controllers aren’t supported. Finally, since the game is geared towards Nvidia, make a mental note to try the game before the refund time expires. 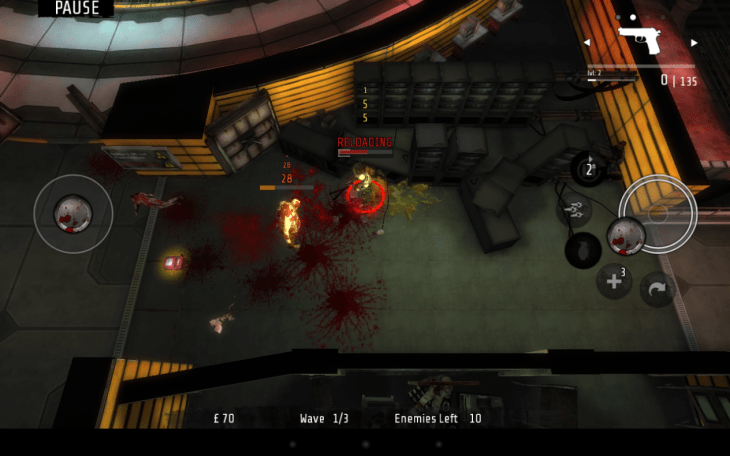 Being a premium game, Killing Floor Calamity obviously aims at higher-end hardware, boasting off some additional shades and depth on Nvidia Shield devices and currently Nvidia exclusive two-player local co-op. In my modest opinion, the wider spectrum of hardware the premium game supports, the better for the monetization, but I am just a user. That said, there needs to be a free demo because some Nexus and Samsung users report a “no go” for Calamity. My worn Galaxy Tab showed no difficulty, Galaxy Tab S had no problems, either, but LG G Pad Lollipop reports crashes, Galaxy Tab Lite reports are inconclusive, so are Nexus; and seeing the devs recommending the users update their hardware to the latest OS version makes me feel a little uneasy.

That said, Nvidia and Samsung fans of the original game should definitely check it out because it looks fabulous, and with the controllers it is tons of body parts blasting fun. 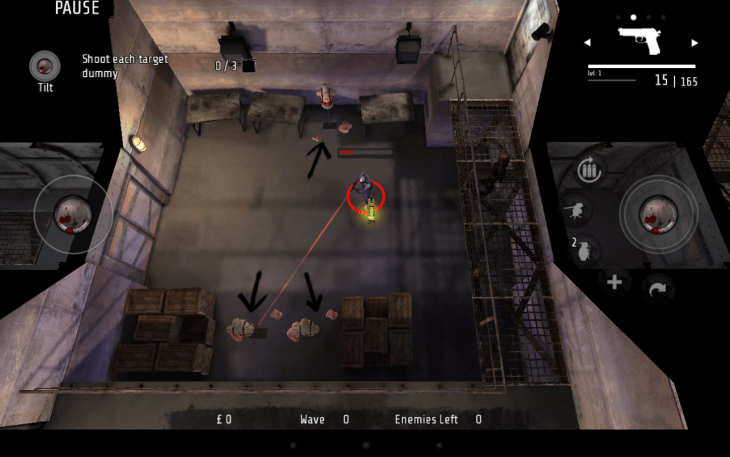 Killing Floor Calamity looks as a zombie shooter should look, but with the level of detail and coat of paint Nvidia devices deserve, and on larger screens it looks bloody bonkers. There are 10 types of zeds, and each of them is as repugnant as the other, with the neon green toxic ooze spitting creatures, zombies and well, all that genetically modified bio-material that ate too much GMO corn from Monsanto. Each zed has a name, like clot, stalker, gorefast, husk or scrake, and they all have their action patterns, but who cares when you are surrounded or cornered and just cut them into bits and pieces of mutating flesh?

Long story short, the design is gory-glamorous and worth every cent of the asking price. The soundtrack is no less impressive, with the tense music scaring the hell out of you even before the zeds appear on screen, and when you are in trouble and about to kick off – that kind of sound score scares my dog away. 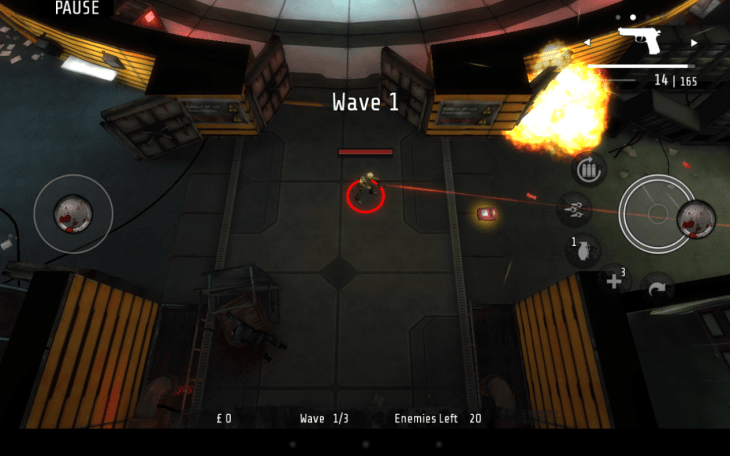 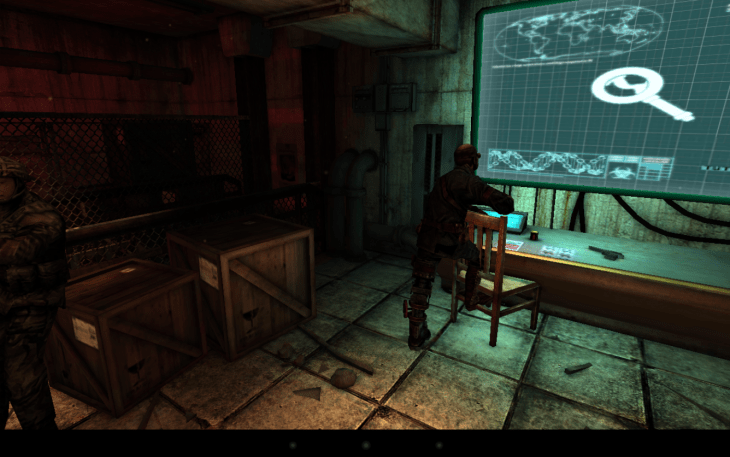 Killing Floor Camality is a fantastic mobile port of the original PC first-person zombie shooter, and I love the transition third-person top-down perspective. It looks good, it offers an excellent replay value and loads of content with 20 upgradable characters, 9 zeds and 35 unique weapons you can buy for your hard-earned British pounds. Having no IAPs is a big plus. This game is for you if you are a fan of the original and don’t mind having its portable version and if you appreciate the genre in general. However, it is not alone in the niche, and the competition is tough, with some titles offering fairly tolerable freemium models. That said, the game is worth its price, and is fun to play, provided you sport a higher-end device and external controllers, better yet Nvidia Shield. But make no mistake, this game is not Nvidia exclusive and by all means try it out if you are confident about your hardware. Without the external controllers, the onscreen buttons may need a little getting used to, but the gameplay is still very addicting and entertaining. Calamity is a solid and competent game – try it.