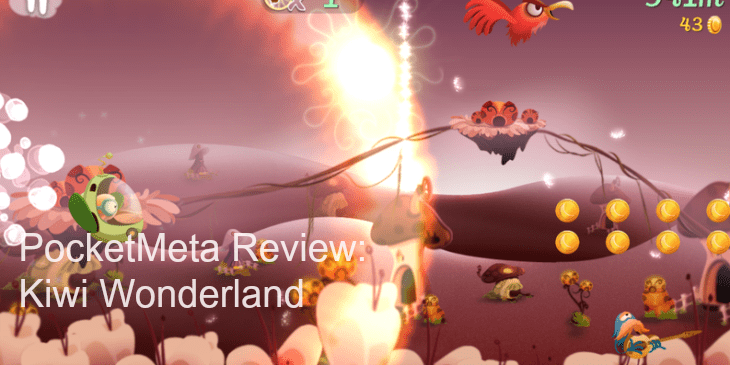 It is indie, free-to-play, accessible, visually gorgeous and an absolute must-play if you are looking for your next favorite endless runner à-la Flappy Bird.

Kiwi Wonderland is an interesting case – first released in late 2013 for the Blackberry devices, it was later remastered for iOS, and only in spring 2015 launched for Android devices. 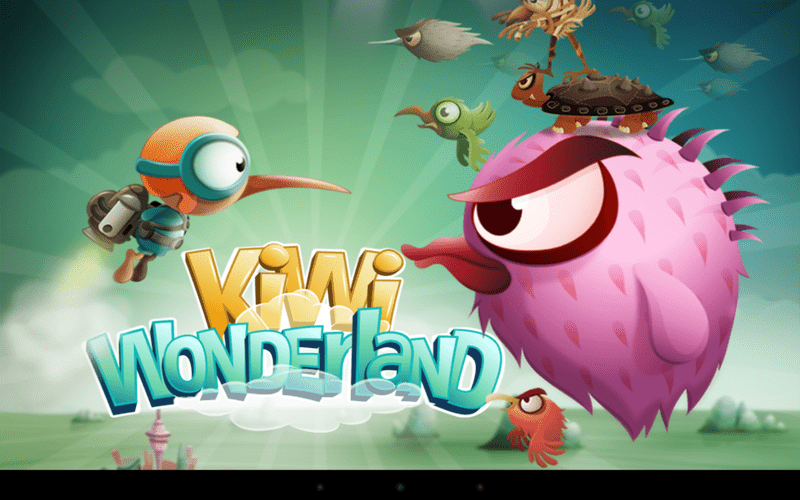 The game is abundant in little and big moments filled with a visually polished cuteness, so if you are more into blood, bone and heavy metal kind of thing, you will likely find this pastry too sweet. Everyone else, you are in for a treat.

Kiwi is a little cute bird that doesn’t fly. You know, like the penguins, only more bird-like. They have little wings that can’t lift their colorful bodies off the ground. Nonetheless, they are daring dreamers and are determined to join their fellow birds up there in the sky some day.

Until then, flying in their dreams seems like a sweet getaway from the sad reality. Yes, the bird sheds a tear or two as the game loads, so if you find yourself in that emotional period of your life when everything seems too “aww,” get a napkin. On a serious note, I downloaded it for my youngest niece and we ended up playing it together – it’s just that good-looking and fun.

So, you play as a Kiwi bird that is asleep and flying in its dream. The mechanics are pretty much like in Flappy Bird, Jetpack Joyride, Ski Safari or Epic Fly. You tap and hold to make the bird fly up and let go to let it fly down. When you don’t tap, though, it runs along the terrain automatically. It’s a horizontal endless runner that tests your reflexes and treats you to some good graphics and fun soundtrack.

Your bird glides, flies and rides, trying to avoid all sorts of obstacles. First, there are mean birds that try their best to get in Kiwi’s way. The problem is Kiwi is asleep and if it hits the other birds it wakes up and it’s a game over.

The enemy birds are numerous, but never overwhelming and come in great visual variety – Red Cruising Birds, Green Zooming Birds, Puffer Expanding Birds and the Superfast Arrow Birds. If you can’t avoid them, try stomping on them with your long Kiwi nose to delete them and stay asleep.

Likewise, when you are on the ground you face other obstacles – Spiked Turtle, Snapping Bird and the more chilled out Guitar Bird, which looks like that redneck gringo from my favorite Swamp Attack, just standing there dangling the strings on his guitar.

Another type of obstacle is the floating platforms that have spikes on different sides of them, so you will have to jump and glide between them. The challenge is to collect the power-ups and the coins that are, of course, placed near the obstacles, in most cases. 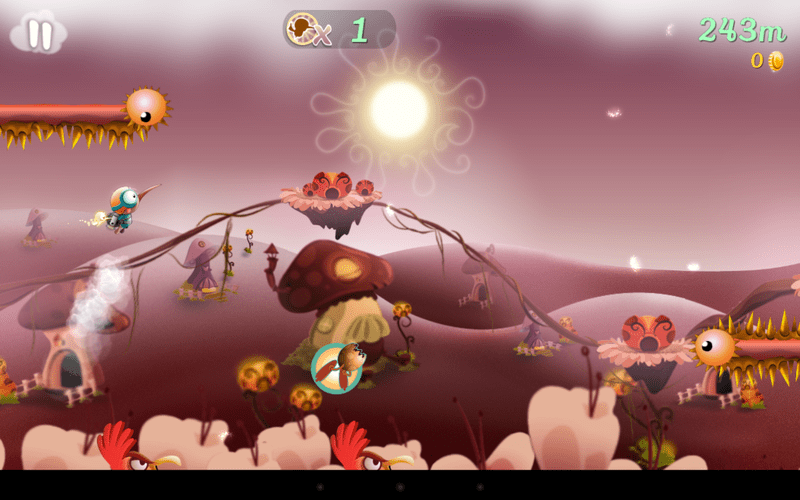 You will collect power-ups that look like a fairy in a bubble, and these will give you a few extra hits your bird can take before waking up. Then there are the Flapper Light Craft, the Kiwi-copter, the Egg Runner and the Jumbo Jet, which eliminates everything on its way.

Overall, the game nails that ‘one more try’ addiction factor that makes you play for hours. Luckily for the players, there is no life meter, or any kind of stamina system. So, you can play literally as much as your schedule allows you to.

By default you have a few hearts that let you revive, pardon, keep the bird asleep and continue the run from the place it took its final hit and woke up. You can also get two more hearts for rating a game.

The touch controls are smooth and responsive and I haven’t felt like they were to blame for my own awkwardness.

Kiwi Wonderland is accessible, but challenging. All across the levels, various power-ups are scattered, so every now and then you will be collecting them. Vehicles, Mily the Dream Pixie and a load of other funky characters and boosts will keep unlocking for you as you play.

Overall, it is not too difficult of a game, but unlike the annoying Flappy Bird, Kiwi Wonderland makes sense and offers a feeling of progression and achievements. 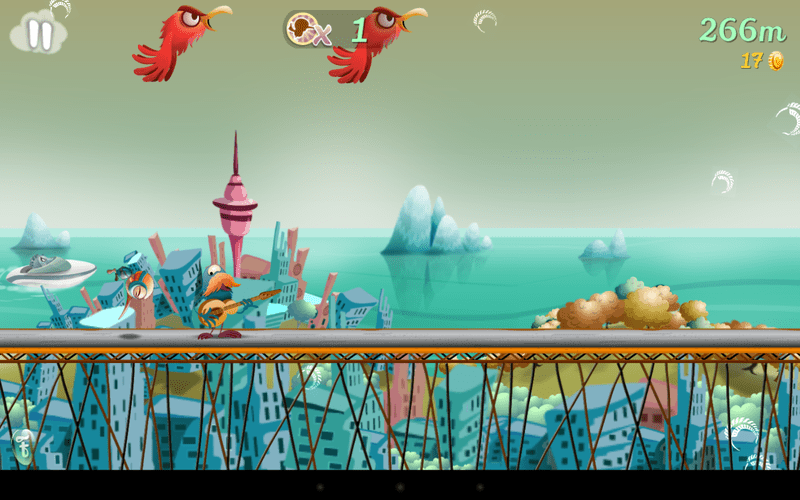 The game features missions and every time you start you see a bunch of goals it wants you to accomplish. When you do, you are rewarded with coins or hearts. You can also participate in the global leaderboards and boast off your run meter results on Facebook.

Another funny little detail is the birds that fly around making gibberish noises when you are in the Menu. Pop them to collect more coins!

Kiwi Wonderland offers a surprisingly thorough set of extra content, which gives it an excellent replay value even for a non-paying player. First off, there are different environments that get unlocked according to the game’s own judgment, or at least I haven’t figured out when or how you unlock them – they don’t seem to be on the Missions list, but I might be wrong.

The game then shuffles these environments in random order, so you can play several times in the winter setting then skip to the pinky forest, then to the harbor setting and so on. This random element works to create more diversity and truth be told I find it even more compelling if it were possible for the players to set a preferred theme of their choice.

Next on the perks list is the Kiwis. The default bird is just fine and a totally adorable protagonist. Once you have collected enough coins, you will be able to choose from two more available colors for your Kiwi. However, there are more Kiwis on the list in the Shop department, and they are awesome.

Also, if you reach 10K you unlock the awesome night mode, which looks impressive.

The green energy bubbles are also worth picking up because once you have collected enough of those you enter a special hyper mode and collect all the coins you can find while you’re in the mode.

Overall, hidden gems and perks are scattered all over the game, and make it double as fun playing it. It’s almost like you play to find the next hidden perk, besides the nag to beat your own high score or compete with the others, of course.

You collect coins as you play, and as I said, you can even pop the birds when you are in the Menu – this will give you a few coins more. What these coins can get you is a different question, though. The extra Kiwis are quite expensive, and when you will be able to buy them for the in-game coins depends on just how good you are at playing the game. The longer the distance the more coins you get, obviously.

That said, the extra Kiwis are expensive, and so are the boosts and the revives.

Even though some special Kiwis can only be purchased for real cash, the IAPs are not necessary to enjoy Kiwi Wonderland. On the contrary, it is the case of a game which makes you want to excel over your own results, and rewards you with hidden perks, badges and a good deal of unlockables. Besides, there is no stamina system and you can play as much as you want. So, it would be fair to say there are no paywalls as such, but if you are impatient to get those special Kiwis and power-ups without earning them, you can support the developers.

I was impressed by Kiwi Wonderland’s design. Not only do the settings convey that special dream-like atmosphere where things are sort of foggy, or shiny, but they also come in a decent variety and look very polished, detailed, meticulously thought through. If anything, design is worth every possible praise in this game, and considering it’s free, I encourage you give it a look just for the sake of the beautiful imagery.

Besides, the characters and cutscenes are also very detailed, cinematic and sweet, and if you like the music – you’ll be hooked for a long while on this endless runner. 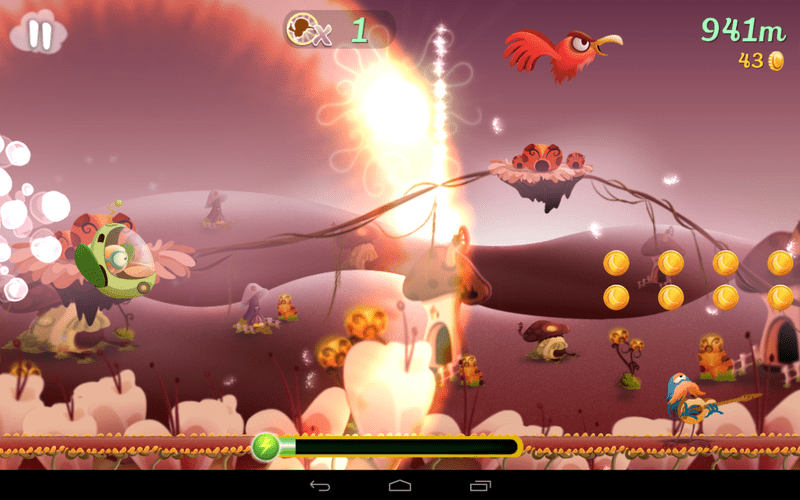 Since there are more than two windows, UI is worth mentioning. It is quite easy to navigate the Menus and find the Shop with its numerous tabs and items, or view the Missions list and see how close you are to your next reward. There is no way to choose a specific environment, though, but you can mute the music and the sound effects if you wish. 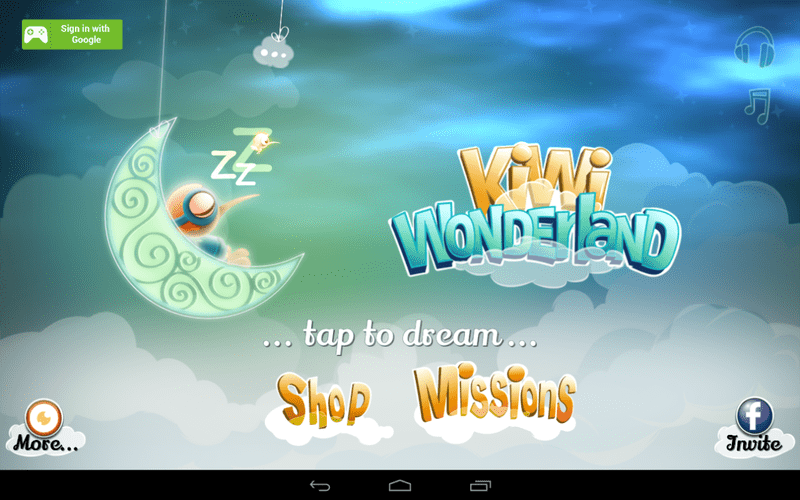 The game crashed quite a few times on me during my first session, and one or two times after that, but I haven’t spotted similar problems in the other user reviews on Google Play, so it might be my local, or a random problem that depends on RAM, or something, because I was simultaneously downloading and installing a few more games while playing it. Other than that, there were no issues – controls are smooth, graphics are superb, the gameplay is addicting. 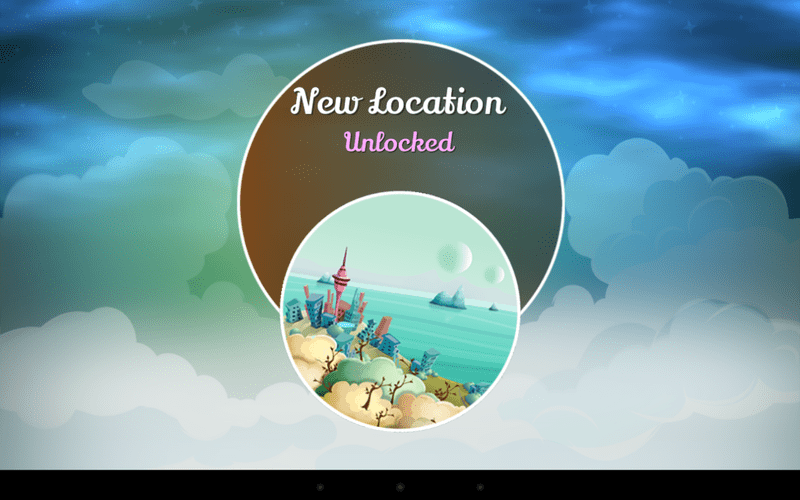 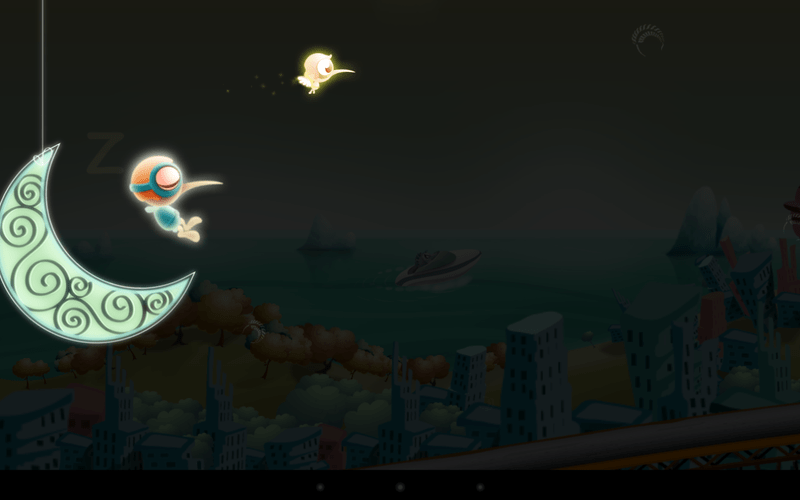 Peaceful, yet challenging, gorgeous and ultimately fun, Kiwi Wonderland may very well be your next favorite twitch/endless runner time killer. Even though the genre seems over-saturated, the game manages to bring novelty and variety, making endless runner relevant again. It is meticulously thought-out, highly polished and most importantly, its gameplay offers an excellent replay value and nails the notorious ‘one more try’ addiction factor.

A charmer, Kiwi Wonderland is entertaining and enjoyable, eliminating that annoying element of other twitch games that make you want to weep at their difficulty curve. In other words, it’s a very rewarding time killer with killer graphics. Get it.