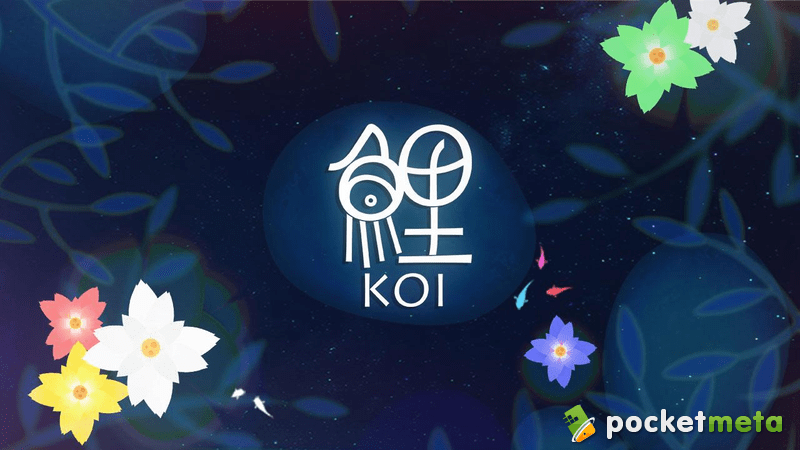 We have been waiting for KOI for a little less than a year ever since we took a sneak peek at it when it got highlighted at IMGA 2015 as the best upcoming game. An indie game from a Chinese developer does not get that much publicity too often, which is a shame. So, when it landed on Google Play and iTunes, we dove head over heels into the azure pond filled with KOI fish. Read about what happened next.

I expected a relaxing and contemplative gameplay that would put some focus onto the environmental issues. Journey of Purity is a sub-title that is there for a reason and Koi does aim to purify its pond and the whereabouts.

The first thing that impressed me was the clean, beautiful looks of the game. The bright blue of the pond contrasts against the dazzling multicolored flowers and the little fish that swim in it. I was expecting a gameplay somewhere along the Sparkle 3 Genesis lines. However, I was wrong. What started as a no fuss trip across the pond, from flower to flower ended up in a desperate experience. 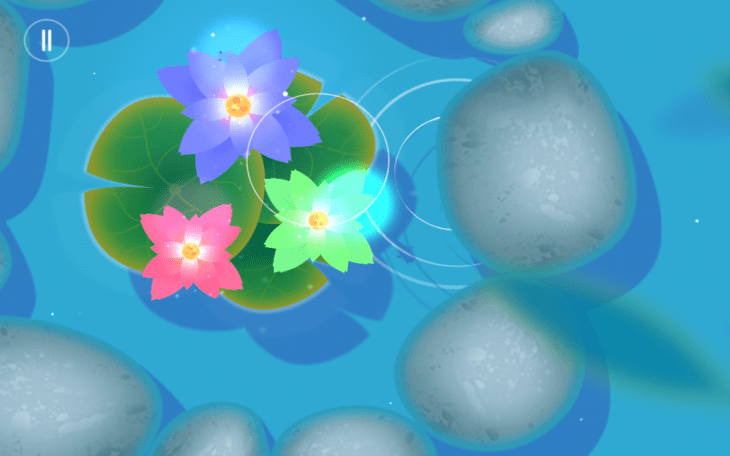 But Is The Gameplay Fun?

Your goal is to lead the little Koi fish, the protagonist, from one flower to another and open them. You can’t open all flowers by yourself, so you need to gather the other Koi and lead them to the corresponding flowers of the same color. When you open the flowers, you purify the pond. The first introductory chapter is easy, while the following chapters introduce new challenges and new actors. The pond expands, and eventually you venture out in the pipes of the big city. There are dangers and obstacles you have to overcome.

Each level consists of several stages, challenges. The first thing that nagged me was the lack of checkpoints. If you should pass the first or second challenge in a level, but fail in the next one, you have to restart the level all over again and do the same tasks that inevitably become tedious. No fun. 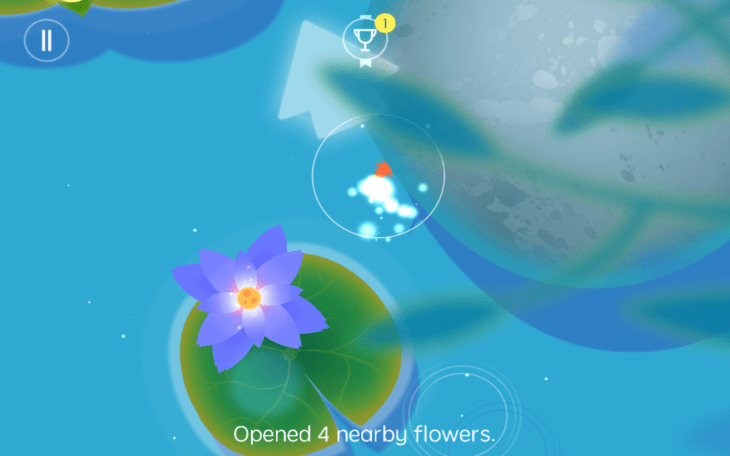 The second nag that I have with KOI is the control system. It is intuitive and it should have felt like second nature, but it’s not. You control the fish by tapping or swiping in the direction you want it to go. The fish is infuriatingly difficult to maneuver. It swims in circles, and instead of just going where you need it to go it seems to “lose track” of where you sent it. The same is true for the other fish your Koi needs to lead to the flowers. They get lost, they get stuck in the nearby rocks, and you have to go back and show it the way again. 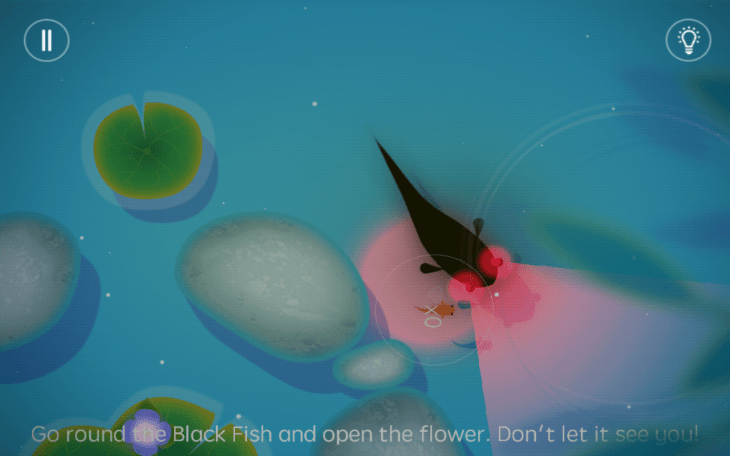 Then, the black poison fish that is the main adversary of your protagonist seems to be the most annoying character of the game. Not because it’s meant to create a challenge, but because it’s next to impossible to escape. When it appears, the Koi seem to freeze or get paralyzed even when they are not in the radius of its sight, yet. More than a dozen times I experimented trying to maneuver the fish away from the big black predator, but it is just too hard to be enjoyable due to the controls and the way the fish responds to them.

The final drop that added to my frustration was the map. You can’t zoom out to see the bigger picture, and what you see seldom sufficient to work out a strategy, a way to solve the puzzle. Maybe it’s meant that way to add more difficulty, but it does not feel right in the context of this game. 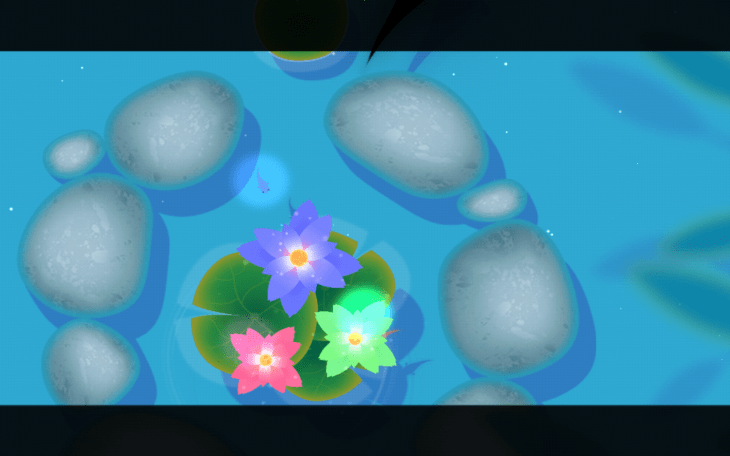 As a result, instead of enjoying my job of purifying the water, unwrapping the back story and watching the pretty things float and bloom I felt stressed beyond my expectations.

Don’t get me wrong. The game is wonderfully presented and has a subtle storyline that unfolds as you play, with quite a few actors and mechanics piling up. It was supposed to be that special game with a serious message, but it missed the mark with a few bad choices in the controls department and the way the levels have no checkpoints.

There are clovers that act as an in-game currency you can use when your fish finally dies, and you can revive it to go on from the same point in the game. I don’t quite understand how the system of earning these clovers works, and the lack of transparency seems odd. But truth be told, I would rather pay in clovers to save a checkpoint once in a while. That way, I would be compelled to buy a pack of them via IAPs. However, the way they are implemented now does not seem too inviting, especially for the iOS crowd because the iOS version is premium AND contains IAPs. 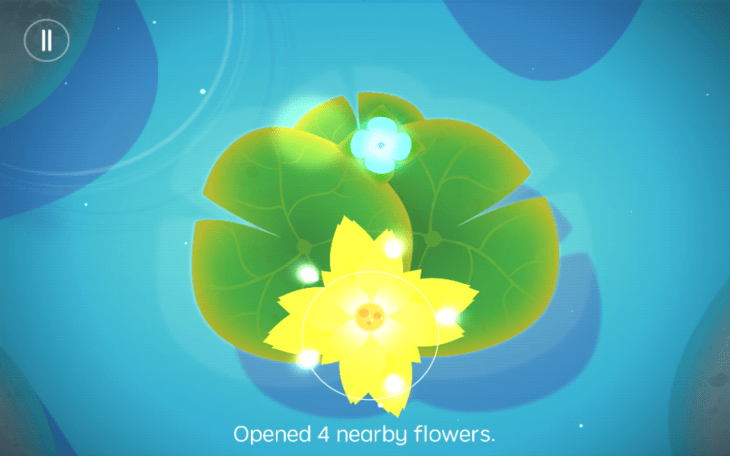 KOI – Journey of Hope is a spiritual journey, but the spirit of it is tormented and torn. The aesthetic pleasure derived from the visual glam, minimalist design and a wonderful background music is probably the only aspect of the game that casts some magic. The lotus flowers, the dazzling pond and the pretty Koi fish suggest a journey to behold, but as I dove head over heels into the game, I bumped my head against a hard bottom. The levels are quite large with the sub-challenges each, but the number of retries it takes to clear one level makes the gameplay tedious and rather boring. Add the aggravating controls, and I am not sure if you persist long enough to enjoy the creativity of the puzzles and unwrap the mysterious and beautiful story with a message behind this game. Overall, it’s a game that starts quite gleefully but soon gets overwhelmed by tiny details that pile up and become a deal breaker.