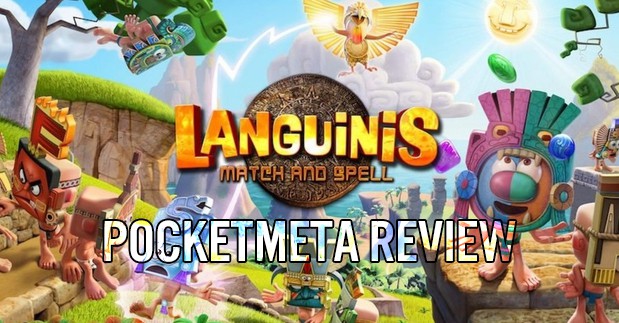 There’s a new game looking to spice up the classic match-3 puzzle genre, and it goes by the name Languinis. It just recently hit the app stores, and developer Tilting Point has been busy getting the name out there. So far, the player reviews seem to be quite positive, but we’ll dig a bit deeper and see if Languinis is really worth your precious phone storage. Let’s get started with the review!

My first impressions of the game were good, and my expectations going into it were pretty middle of the road. You’re met with an inviting visual atmosphere that is created by happy little characters, a nice colorful UI, and a smooth running game. Once you actually get into a level, that doesn’t change either — everything from the swipes of blocks to the thundering destruction of letter tiles when you spell a word looks great.

Another really nice aspect of the design, is that you can clearly see every letter on the board, and picking them out one by one to spell words is a relatively easy task. There aren’t frequent enough environmental changes, or any real variety of the visuals, which is fine — but doesn’t allow it to really knock things out of the park graphically. It’s still a really well designed game, and this is one of the high points of Languinins.

Slow paced and easy to pick up

The first few levels in the game serve as the tutorial, which you’re unfortunately unable to skip. Honestly, if you’ve every played a couple match-3 puzzle games in your lifetime, it won’t be hard for you to learn how Languinins works — it’s pretty straight-forward. You’ll match three or more of the same shape in a row to uncover tiles, which turn into letters. Matching four or five tiles at the same time spawns a special tile that can explode in a square, take out a line of tiles, or blow up every one of a certain shape on the board. 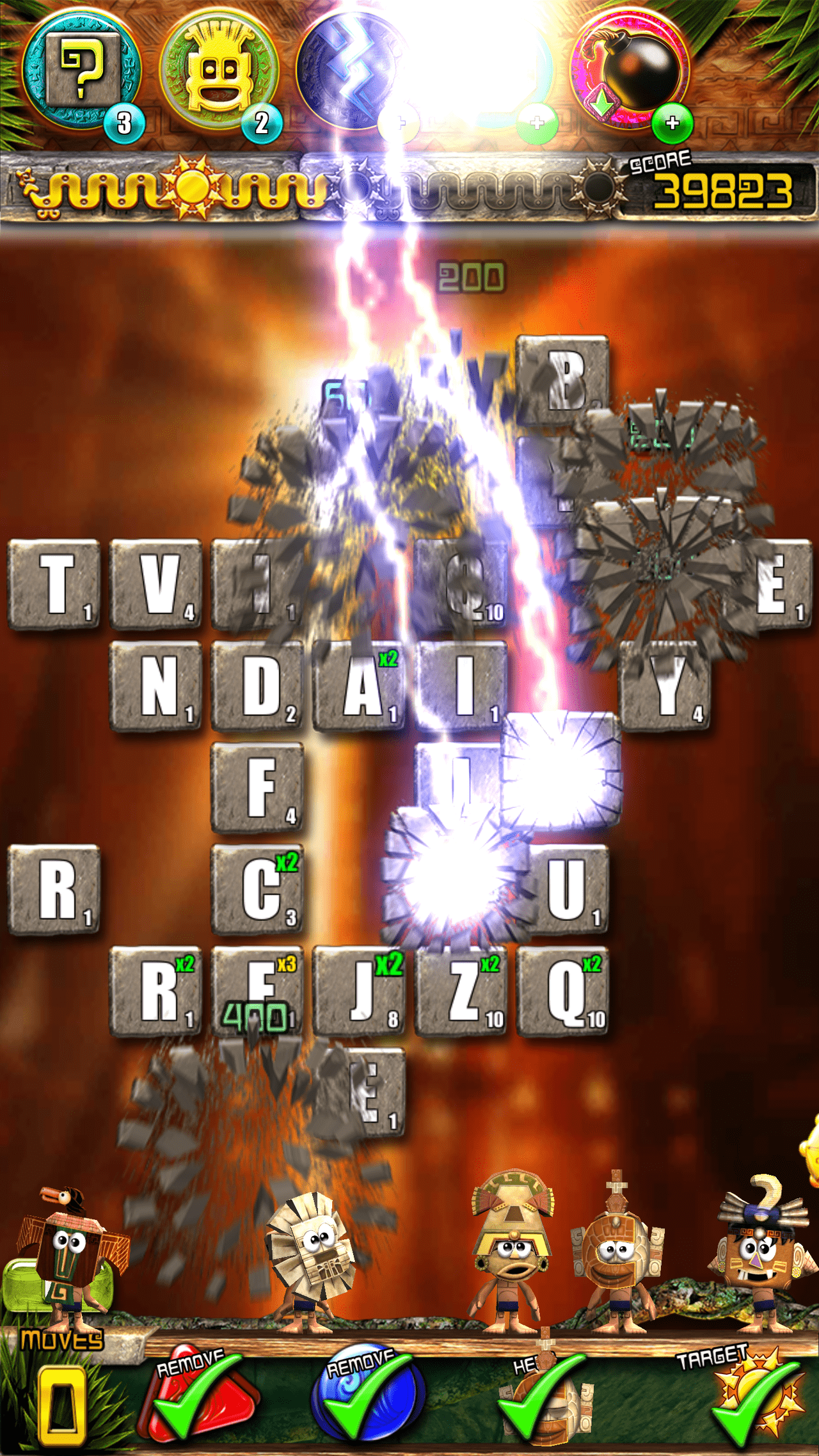 Letter tiles are where the twist comes into play. You’re given a certain amount of moves for each level, and these moves are used to either move a tile, or spell a word with the uncovered letter tiles. The more letters in the word, and the letters you use, will determine how many points you get for spelling it out — and this is also the only way to get new tiles on the board, as matching rows wont add new tiles. There are also power-ups (automatically find the longest word, destroy a tile, etc) which can be earned a few different ways, but primarily through coins, which are usually earned from IAPs.

For me, Languinis is going to end up being one of those games I’ll actually come back and play every so often for morsels at a time, but not something I could every really binge on. The campaign has plenty of missions to complete, but eventually you’ll run out of lives or run out of determination to keep matching tiles and spelling words. If there’s one thing I’d add or change about the game, it would most definitely be a multiplayer mode — which I feel would add a perfect amount of variety to the Gameplay. 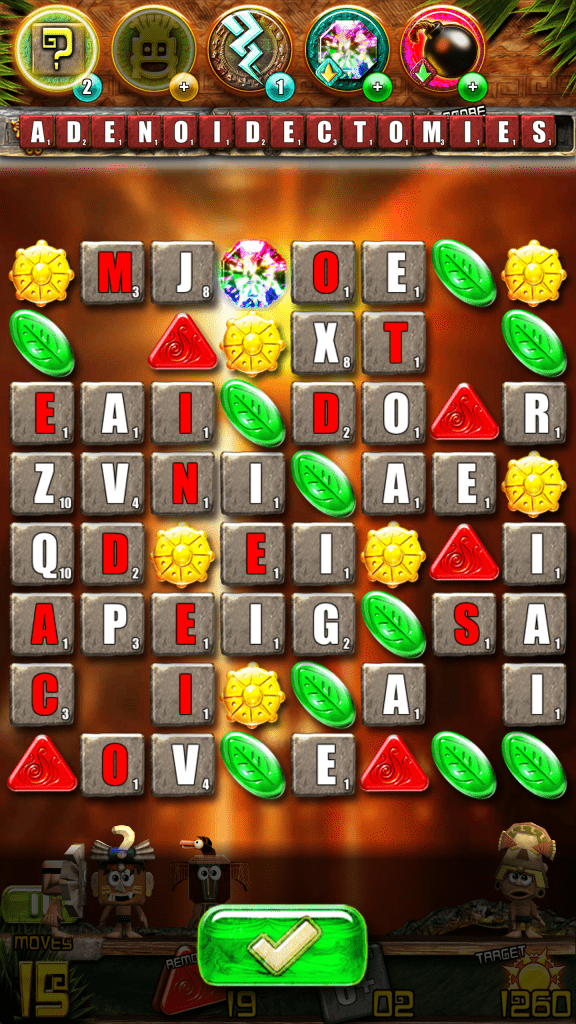 The thing about the campaign that makes it a little extra boring at times, is that there’s no real intensity, and you can even just break out the dictionary to make things a whole lot easier. A timed multiplayer mode would require you to spell things out quicker, and add a whole lot more intensity to the experience. It certainly isn’t a bad idea to mix match-3 and spelling, but I feel that Languinis could really benefit from a tad bit more tweaking and at least one new game mode, be it endless, head to head, co-op, or whatever they can come up with.

You are able to purchase coins in the game, which in turn can be used to unlock various boosters, as well as other things like unlocking a new level or giving you extra turns at the end of a level that you lost. The prices vary quite a bit between the amount of coins you can purchase at one time, as well as the amount of coins required to buy a certain item.

Ultimately, it is a game where the IAPs often have a very short term usage/reward, which isn’t that great in my book. You can also use coins to replenish your lives which can be depleted by failing too many stages, another cringe-worthy IAP mechanic. Still, it isn’t unbearable restrictive, as you can still play the game as long as you want — as long as you don’t fail too many stages, in which case you’ve gotta wait. 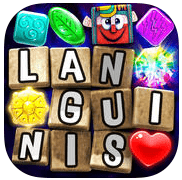 Languinis offers a rather unique twist to the classic match-3 puzzle genre, but nothing too innovative to merit a fantastic grade. The word finding aspect is fun for a while, but quickly becomes as repetitive as the match-3 Gameplay itself. Although Languinis is a smooth game with a very long campaign, a lack of additional game modes and an altogether repetitive game eventually ends up stale. It is free to download, and can certainly offer a few hours of entertainment, but not a whole lot more than what meets the eye.