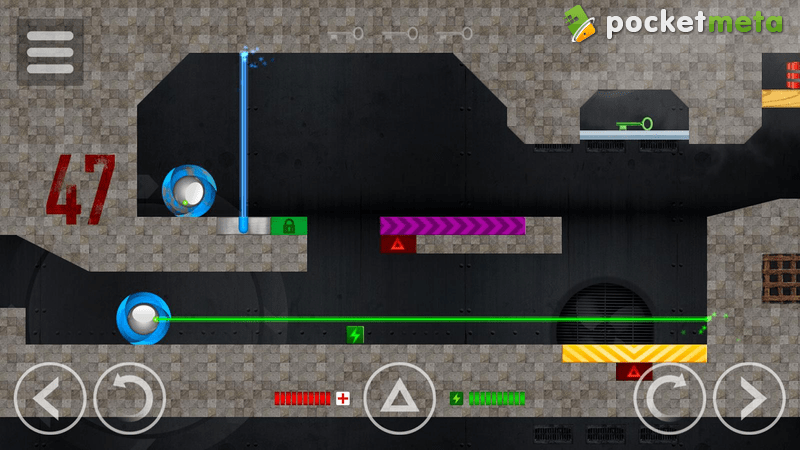 If you avoid all games with the word “escape” in them thinking they’re just generic nonsense loaded with ads, I hear you, but this time is different. Based on a top-notch brain teaser Laserbreak (review) from errorsevendev, an indie developer from Australia, Laserbreak Escape is a gorgeous new puzzler. We loved the first game and included it on our list of Top 10 Puzzle Games for Android. Now I seem to be even more addicted to the sequel. Check it out.

You control a chrome ball with a laser beam you can turn on, off and rotate. There are two options to rotate – with the help of the wheel at the bottom, or the bigger wheel around the ball itself. There are two buttons to control the ball’s movement – left and right. The triangle button in the middle activates the elevators when you reach them. 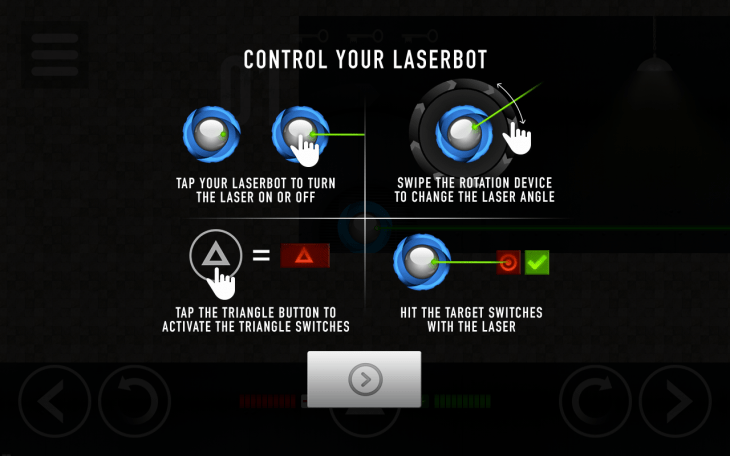 The levels consist of a set of obstacles you have to overcome with the help of the laser, movement and your brain juice. The variety of objects that make the challenge increases with every new level. Each object is of a different material and structure, on which depends how you can interact with it. Say, the wooden objects can burn, so you fry them with that laser. The glass objects are a delight to smash with the chrome ball itself. The metal boxes and wooden balls are a different story. You need to activate whatever mechanism there is to move them and with their help detonate the bombs. If you move the ball itself on the bomb button, bada-boom.

At some point, teleporting vortexes will be added, and not too long into the game you meet your adversary – the red chrome balls that shoot the red lasers. They are not kidding! Interestingly, the quest of the green laser wielding chrome ball is not just to come from room one to room 47. There seems to be a friend waiting to be freed somewhere in the end. So, grab a vitamin pill, boost your brain activity and enjoy the game. 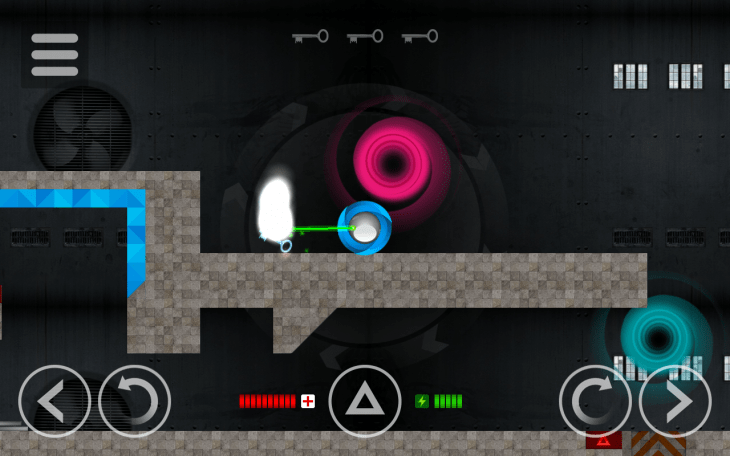 The levels get increasingly difficult, and hopefully, the developer will eventually post the walkthroughs, as was with the original Laserbreak game. Yet, I felt happy as a kid with each solved level, especially when they got complex.

Usually, you can swipe to see a little further than what you see in the ball’s (pardon, Laserbot) immediate vicinity, and it helps you plan your moves. Often times, you need to plan ahead and act fast, especially when you deal with the red guards. The chrome Laserbot has two stats – the green one stands for the energy and the red one for health. Once in a while you will encounter the hideouts where the extra energy or health packs lay. 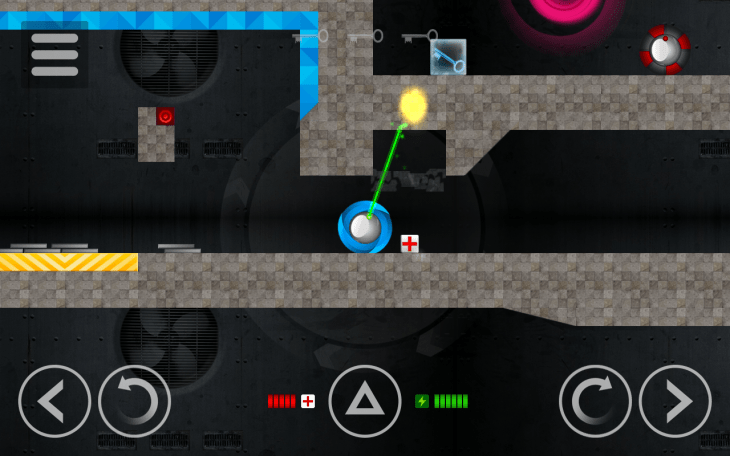 I dig the aesthetics of Laserbreak Escape. The crisp looks and detailed textures are complemented by the realistic sounds and an ambient soundtrack. The smashing, burning, exploding effects are spot-on, and the game looks polished, detailed and complete. By far, it’s one of the best brain teasers you can get on Android for free. And it’s immensely addicting.

There are 47 levels, and considering how I got stuck on level 21 within my first gameplay session, I anticipate I might linger with it a couple more days, but I can also imagine someone like my brainy nephew beating it in one day. The developer seems to be working on an expansion because the users are asking for it. 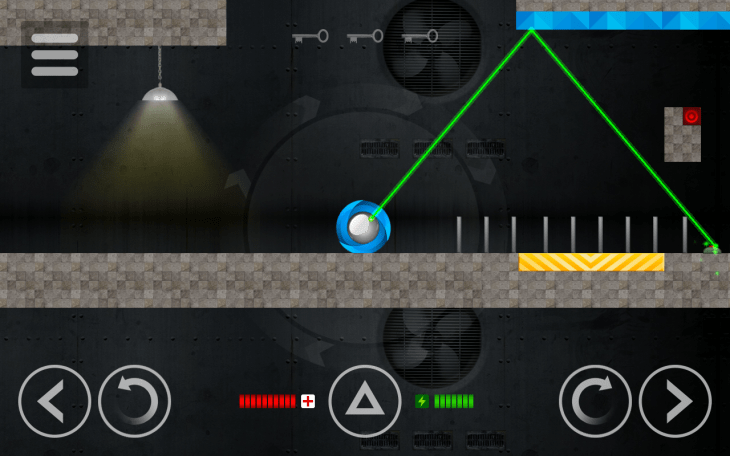 The game is free, ad-supported. There is only one $0.99 IAP to remove the ads. The latter usually appear full screen (not videos) once in a while – I seriously did not register the frequency. The ads aren’t interfering with the game, and the trade-off seems quite generous – a brilliant game for free, no limited lives, no in-game currency, points, stars and all that redundant attire that distracts from the gameplay. In Laserbreak Escape, the gameplay is central, and it’s addicting as hell.

The only nag that I noticed is the controls aren’t multi-touch. Say, you can’t control the laser pointing wheel and move at the same time. Or, I might have encountered a bug. Even so, it does not affect the gameplay other than in the cases when you need to act quickly, as is the case with several guards on both sides. 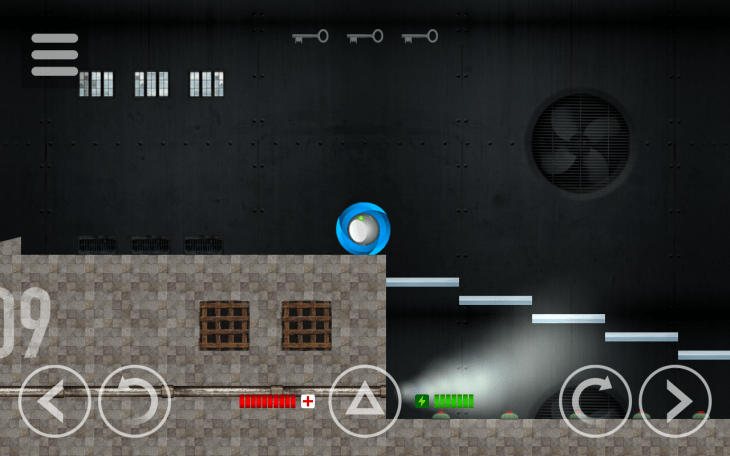 Not sure if it’s a bug or not, but I can’t deploy two control buttons simultaneously

Laserbreak Escape is a fantastic puzzler with crisp graphics and mind-boggling challenges. 47 levels of delight made with a lot of love and care is up for the grabs on Google Play. My favorite time killer this month. Don’t miss it.