It is easy to find a good game from AAA developer on Google Play, but sifting through the sands of the indie games weeding out good ones? Ain’t nobody got time for that. This is what we’re here for – to give you heads up about the games that deserve your attention, but are not located on Google Play’s front page.

Last Hope – Heroes Zombie TD is one such game coming from a three-men indie team JE Software in Sweden. It’s a freemium game, offering in-app purchases, Android-exclusive for now. Let us see what excited us so much about this one. 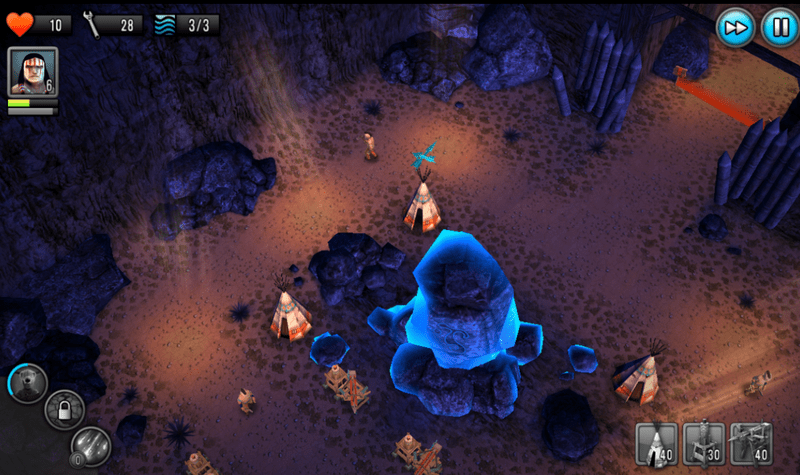 In this game, the story is catchy, even though it’s about the zombies. You are in charge of an Indian village hiding from the zombies in the American desert. It doesn’t look like the game is set in the pre-colonization times, though. On the contrary, it looks like a reservation trying to survive in the middle of a zombocalypse.

The villagers and the main characters are very well rendered and at some point, you find the character to relate to. There are three playable characters as of now, and there are some more in the works. You can only choose one, but each level will define automatically which character can be used. At first, you will play as an Indian Princess; as the going gets tough, the game switches you to an Indian Barbarian (a bad choice of name, if you ask me). Then, there is this mysterious Desert Scout clad in a respiratory mask and a hood. He has a very nifty drone gizmo with him, but the scout can only be purchase for some $4.

Depending on the level difficulty and the skill set required, the game sets your character. 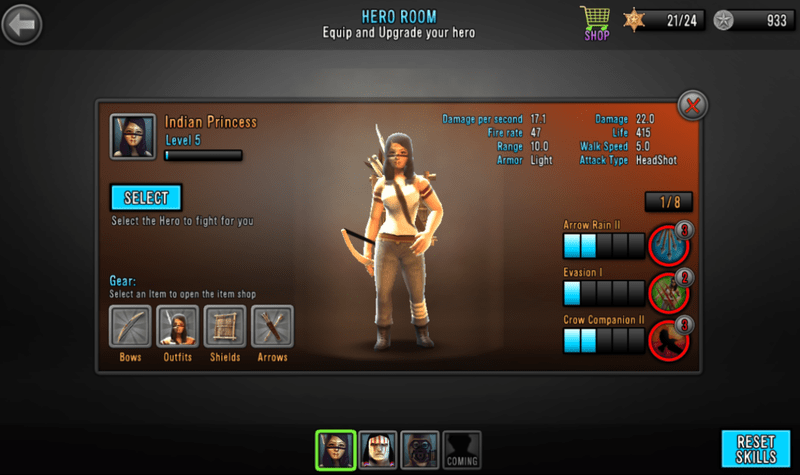 The gameplay in Last Hope – Heroes Zombie TD sees you protecting the villagers of the Last Hope, as they move in and out of their hiding places. As you make progress, they will have to move on across the desert and join forces with the leftovers of the human resistance. At some point, a mysterious corporation comes into the spotlight, requesting you find some of their “comrades.” Even though the levels are linear, there are several bonus levels and two alternative endings, both of which you will have to play through.

Tower defense fans should feel at home with how things work here. You have an arrow turret, a stomp turret that slows the zombies, an Indian Defender, and several more, like a mortar, sentry, poison and air defense.

As you start, only the arrow and stomp turrets are available, with the Indian defender getting unlocked within the first few levels. Each weapon and the Indian Defender can be upgraded and there is a complex tech tree for each of them. Every upgrade costs coins, and you get those either by playing and completing the stages, or buying via IAPs. It is worth mentioning the tech trees are branched and have about 30 upgrades per each weapon, so there is plenty of room to grow. 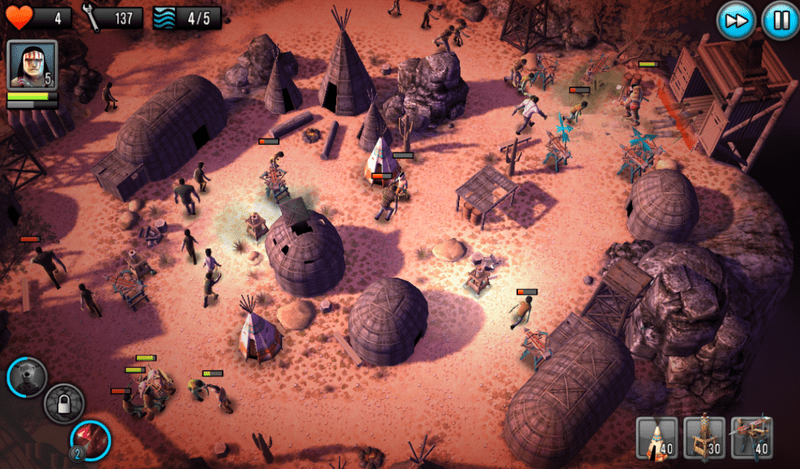 Now, the characters have a skill set, and as you take them to the battlefield, they gain the skill points you can then distribute among their skills. So, the Princess can fire a rain of arrows, have an eagle companion and be pretty. The Indian Barbarian can have a stone skin, a mortar strike and summon the helpers, which is a very mighty power-up. The Desert Scout has missiles power-up and a drone.

Each character also has a set of outfits and special items like helmets, shields and shoulder armor. Naturally, some of the basic one are there by default, but the rest needs to be bought for coins.

The upgrades to the weapons and special skills make a big difference in the gameplay. Additionally, there will be some special god-powers attributed to each character, so that they can summon these powers when the things get desperate. There is an earthquake, a lightning strike, maybe more natural powers you can use. Each has a cool down timer and chips away from your pocket. When the coins run out, you are left high and dry against the zombies. 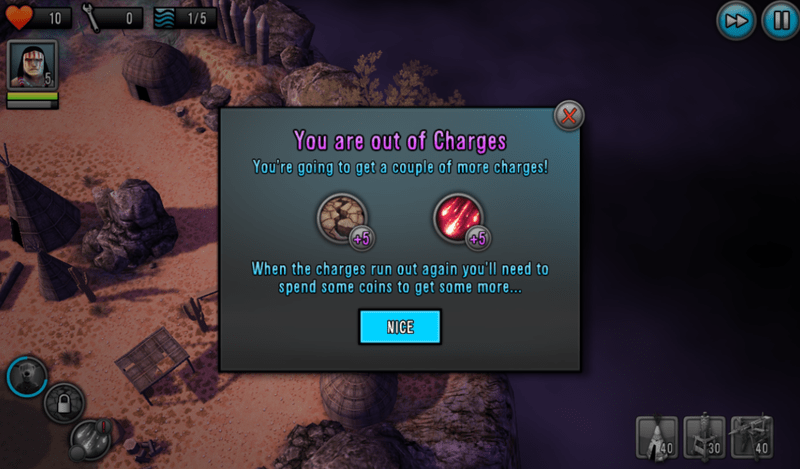 The game rates your skills at the end of each completed stage by the familiar three-star system. You get one star for completing the level in under an X minutes; another star for not letting a single zombie pass through the laser gate; another one for not taking damage to your character.

While the initial levels are a piece of cake, I should say Last Hope makes it pretty hard to move on without due upgrades. Planning is also of paramount importance, and it’s nice to replay the hard levels thinking of a better strategy and seeking out a perfect combination of helpers and Indian Defenders and the weapon turrets. 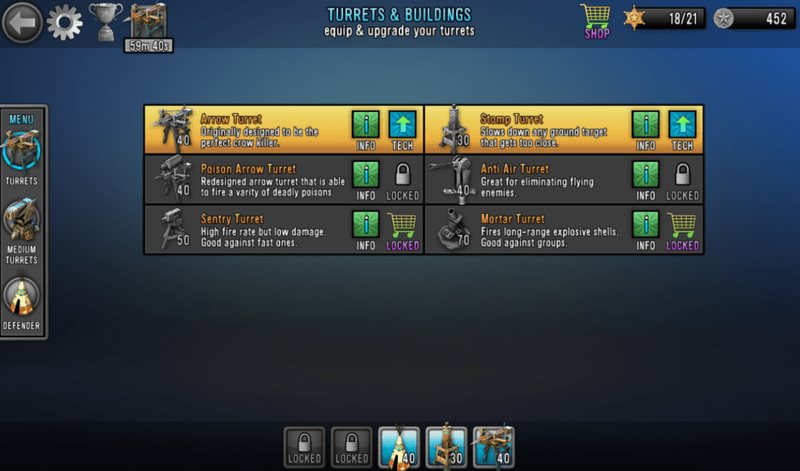 Also, the map throws in a few surprises when the undead start coming from a different direction the moment you least expect it. As a matter of fact, you can see where they’re coming from by the timer located on your map, but when you are in the middle of a battle on one end, you can miss an incoming wave on another end, unless you take a careful look at the location every now and then.

There are the regular zombies and the powerful Nemesis-type beasts (I take that name from the Resident Evil movie) that look like Hulk. They’re hard to beat, but I found that the earthquake does a good job of chipping away from their health bar.

Overall, the difficulty depends on your skills. If you are an avid fan of the genre, you will most likely beat the game in three days to one week, provided you have the time to invest. If you are a newcomer, more gameplay hours are guaranteed. 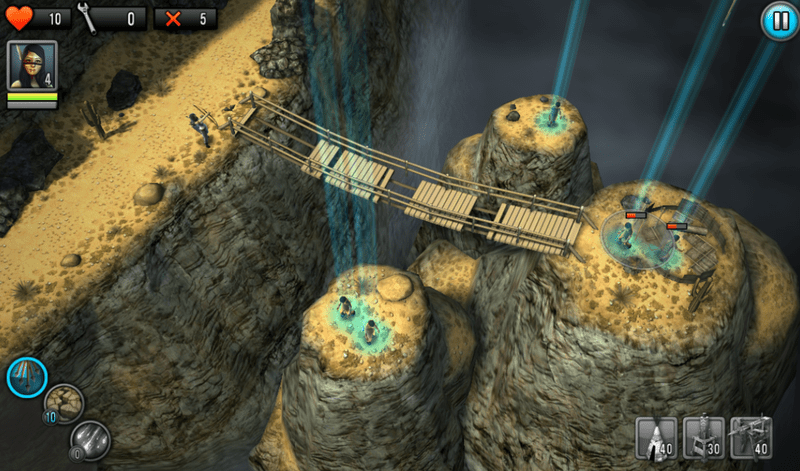 Some levels require replaying to get the three stars, or to grind for the coins, if you are not willing to resort to the IAPs. I’d say it’s a pleasant challenge to achieve the 3 stars due to the fun and addiction factor of the game. And it’s right there. Despite the seeming traditionalism of the gameplay, Last Hope – Heroes Zombie TD manages to engross the player until there are no more levels to battle. The secret? Probably, the balanced gameplay, awesome design, music and the overall fun of it. 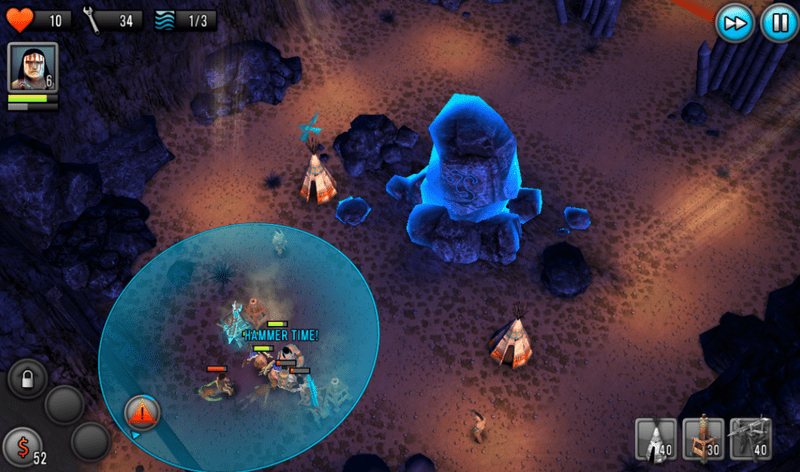 The game is polished and looks absolutely gorgeous on a larger screen. Besides, there are the sound and graphics settings you can adjust to your hardware’s capacity. Everything looks detailed and thought-through, and honestly, I am surprised this game is freemium. If there was a premium no-IAP version, I’d go with that instead.

Not only can you zoom in and out on the map and watch the battles really close, but the menus allow you to rotate the turrets and the characters, letting you stop and admire the art work for a while.

The Indian patterns on each item of the weapon and clothes, the faces, the shapes and the textures – everything looks brilliant. 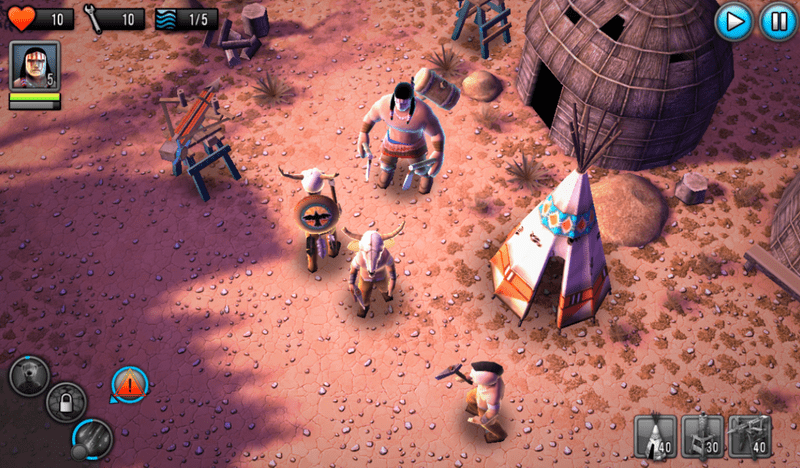 In addition, the sound score of the game is plain cinematic. In fact, the first time I spotted the game on Youtube as I scrolled through the trailers, and saw a gameplay video. It’s the visual glam and the music that prompted me to check it out on Google Play, and I was right – each level is filled with an intense, troubled, sinister and atmospheric music that creeps the hell out of me and creates that feeling I had the first time I watched the Resident Evil. In other words, if the design is superb, the music nails the stressful atmosphere.

The only thing that plays against the game is the freemium model, and that only to a certain extent. If you have the time and patience, I am sure you will beat the game without paying. There does not seem to be a paywall as such, but a healthy dose of grinding. The IAPs, on the other hand, are somewhat pricey. The Desert Scout character costs $3.99; a limited offer of 250.000 coins costs $5. Then, there is a selection of coin packs for $0.99 to $39.99.

Just to get a general idea of the prices of upgrades, the initial ones start at some 250-500 coins, with soon getting to 900-1500 per upgrade. Each upgrade costs not only coins, but time – from 15 minutes to hours, depending on how many upgrades you do per gameplay, and how complex the upgrade is. You can of course speed it up by paying more coins.

Moreover, if you complete a level with anything other than three stars, your bounty will be meager, and the next time you play, you won’t have the money for the god-powers.

When you reach a level you can’t beat without the upgrades and get stuck waiting for the timers, it may get a bit frustrating, but it doesn’t diminish the fun factor, as surprising as it sounds. That’s a subjective observation, though.

Nonetheless, if there was a premium version without IAPs and with more generous rewards for the level completion, I’d prefer that one.

Last Hope – Heroes Zombie TD is a superb indie entry on the market, and we encourage the genre nerds to check it out. It looks great and boasts of a superb cinematic soundtrack; its gameplay is well-balanced and addictive while the replay value is excellent. The only flaw is the restricting IAP system, which nonetheless does not impose paywalls on players, but suggests some grinding and thoughtful planning. If you want a comparison, Last Hope is much better balanced IAP-wise than Star Wars Commander, in my humble opinion. Overall, Last Hope is extremely enjoyable and rewarding, and provided it’s freemium, there is no excuse not to try it. I am sure you’ll get addicted, too.