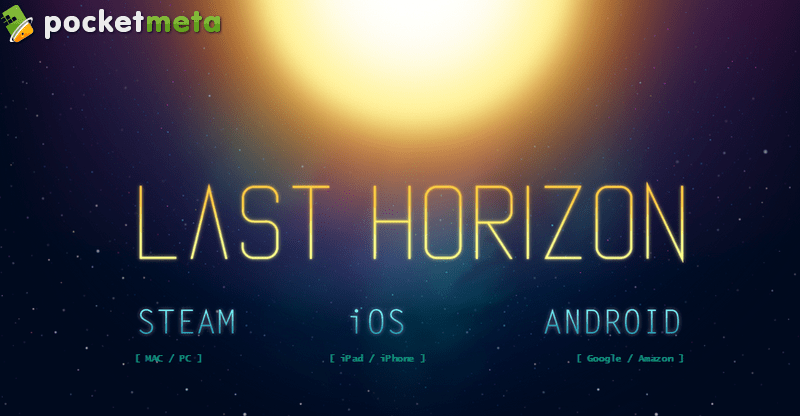 PixelJam’s new game Last Horizon hit the app stores, making a lot of buzz. It has a strong pitch and a load of charm to keep you hooked. That is, until the novelty wears off, but if you are good at it, it’s unlikely to happen to you. If you are considering your next premium game purchase, read on to get a better idea if Last Horizon is your kind of game.

Being a casual reflex-based game, Last Horizon brings a captivating story to the table, and wins the day. Without this story, the gameplay would have been so much less addicting. You’re dying, you see. The humankind is dying because, once again, we have exhausted our planet’s resources and made the Universe so mad with us the sky is literally falling on our heads. You pilot the last ship of the humanity in the search of the resources – ore, fuel, oxygen and whatever terraforming elements you may find along with the humans scattered all over the space. So, there you have it. The responsibility is immense and the visuals plus music do the rest of the job creating the atmosphere of your penultimate breath in the vortex of the cold space. 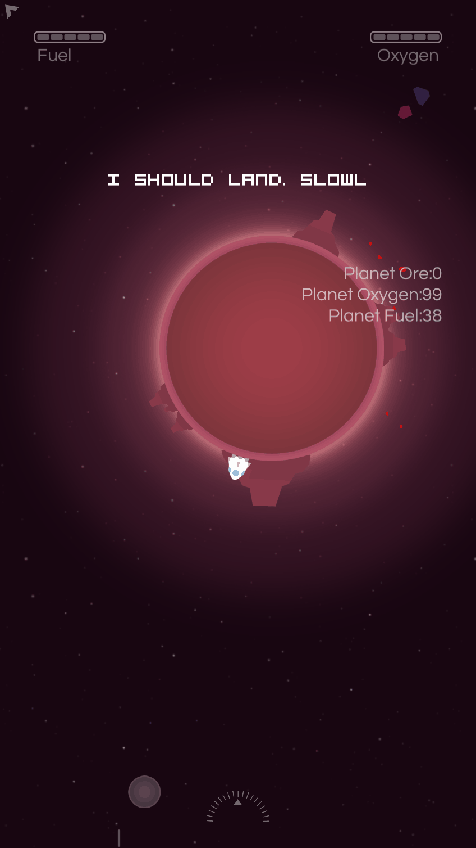 Imagine FTL and Out There stripped off of their ship management and text, or combat. Actually, forget Out There or FTL because the analogy would just confuse you. The only thing Last Horizon has in common with the two games is the premise – traveling from planet to planet, harvesting resources and maybe finding humans, but chances are you might drive some Klingon life form angry by poking in their planet’s depths with your probe.

The core of the gameplay is controlling your teeny-tiny spaceship by thrusting, and rotating it around itself – right and left. That’s it. No breaks, no change of the view angle. The control system is minimalist and presents the first challenge and a decent learning curve here. 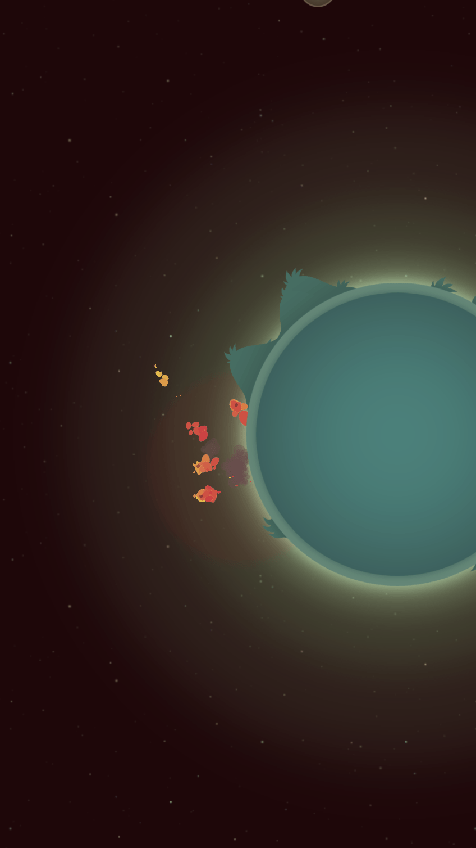 The thing is the rotate buttons are way too sensitive, and the ship is way too small, but most importantly, the buttons aren’t visible and you can’t make them visible at all times. The way how rotate left and rotate right buttons are positioned closely together and NOT visible makes it too easy to tap the wrong button in a critical moment. And the critical moment is landing the planets.

Landing is where you will die the most. First of all, because the limited area you can see on screen does not give you a clear idea of your speed. When you can’t see any planets on screen, and all you get is the arrows indicating their approximate direction, all you can see is the space background full of stars. Yes, the ambiance is rich and once in a while you will see a comet, or a cloud of asteroids passing by, sometimes even alien ships. However, the speed of your spaceship can be very deceiving. So, when you approach a planet, you have very little time to maneuver and land without killing yourself. More often than not, my gameplay looks like I have a drunk-driving Mr. Bean for a pilot – the awkward, clumsy rocket dance disrupts the seriousness of the mission 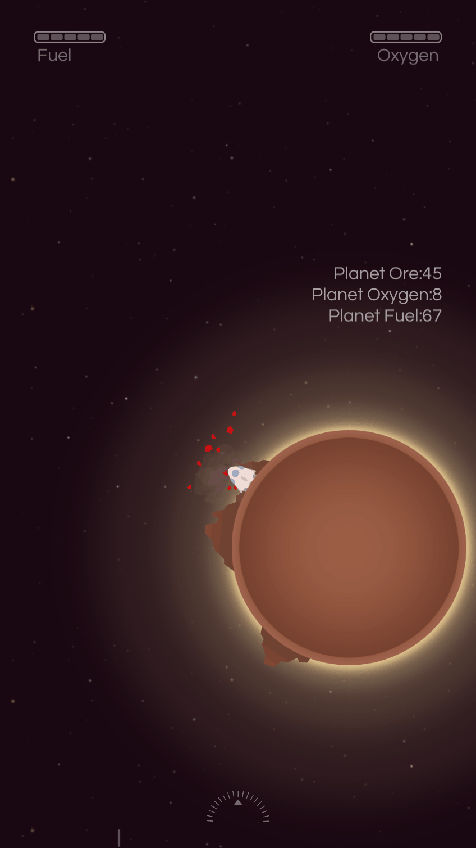 Landing requires you to rotate your spaceship so you don’t dive head first, in which case you are dead. You can’t land too fast because besides your own speed the planet’s gravity will pull you in. So, when landing you need to position you rocket bottom down and use the thrusters as breaks. Sounds easy, huh? Well, in practice it’s more of a reflex-based and spatial skills testing game because you never have the time to calculate the maneuver. The controls have to become your second nature to get you anywhere in this game.

You can’t linger for too long on any planet – you can either exhaust the planet’s resources and kill it, or draw the unnecessary attention of the hosts and provoke an inter-planetary conflict. Since you’re on your own, you don’t want that.

Needless to say, avoid the stars, black holes, asteroids, moons and all the elements of the planets’ landscape that look sharp. The hull of your little rocket can withstand a minor collision with an asteroid, but it does not take too much damage. The ore you mine does repair some of that damage, but the ship is really fragile. 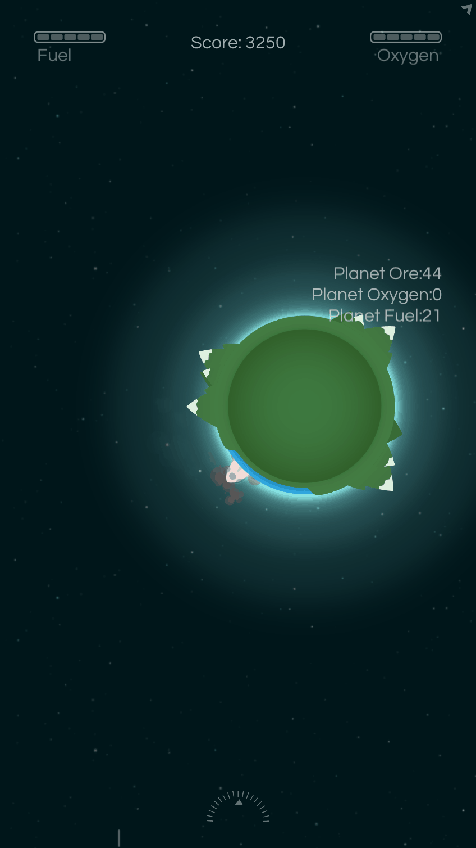 Last Horizon offers four game modes – Flights A, B, C and X. The first three modes have the maps relatively similar, and yet I have never encountered two identical layouts in my experience. The Flight X has randomly generated layouts every playthrough. The difficulty is quite high in all of them, with the X being slightly more aggravating than the other three. There are no checkpoints within the flights. You unlock Flight B only when you are through Flight A, and so on.

The main driving force of the addiction factor is the story because you still want to know if there is a happy ending to this space odyssey. Still, you will be replaying the same episodes, but with different layout, time and time again. The replayability borders on the thin line between the addiction and aggravation. Sometimes, the latter prevails. 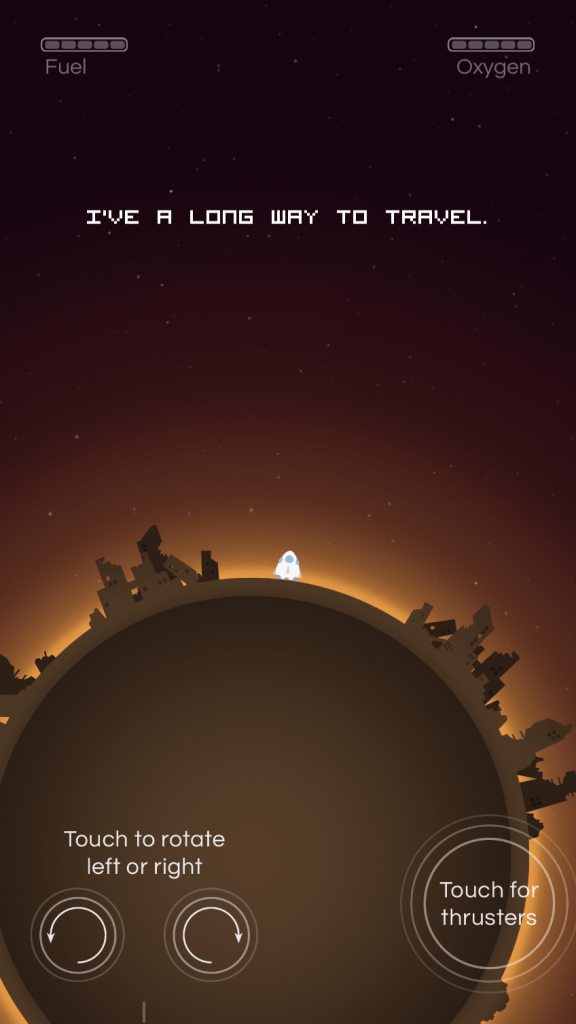 The game is gorgeous. It seems to be the first time PixelJam have done something other than the retro design, and Last Horizon looks eyesome, with its minimalism and the obvious level of polish. The visual variety adds a lot to the replay value, and the sound score is perfectly ambient and fitting the gameplay. The minimal narrative also adds to that itch to progress in the story. The only nag is the buttonless control system that makes the gameplay more frustrating than it should be.

The game comes at $3, no ads, no IAPs, no in-game currency or life system. Once you die, you die, but you can replay as much as you like. It’s nice to see some developers not giving up on the premium model.

Last Horizon is a charming, minimalist and atmospheric time killer that sees you rotating your ship and using thrusters and the planets’ gravity to land and travel. The safe landing will be your main challenge since the spaceship is fragile. The control system suggests a steep learning curve and presents the main challenge along with the fast-paced action that does not leave time for maneuvering. A sinister story keeps you moving forward while the visual eye candy feeds your hunger for variety. In all honesty, Last Horizon is a good time killer until the novelty wears off. When it happens, during Flight A, B, C or X depends on how good you are at it.