Le Havre: The Inland Port is a two-player board game ported to mobile. Fans of Uwe Rosenberg games will probably buy it without hesitation, and they should. Everyone else, especially the newcomers, this way. If you fancy a smart board game on mobile that you can play offline versus AI, or versus online opponents, as well in asynchronous multiplayer, that is cross-platform and finally, that lets you hone your micro-management skills of a merchant, Le Havre: The Inland Port is your next devotion.

Even though the story is not central to the gameplay, you still need to know Le Havre [ləˈhɑːvrə] is a French commune and a city situated on the bank of the river Seine. Its port is the second largest in France for total traffic, and the largest container port. So, a game about becoming the most successful candidate for a mayor of Le Havre by building, producing and trading has some substantial factual base to it. You have 12 days to prove your managing skills are better than those of your opponent. 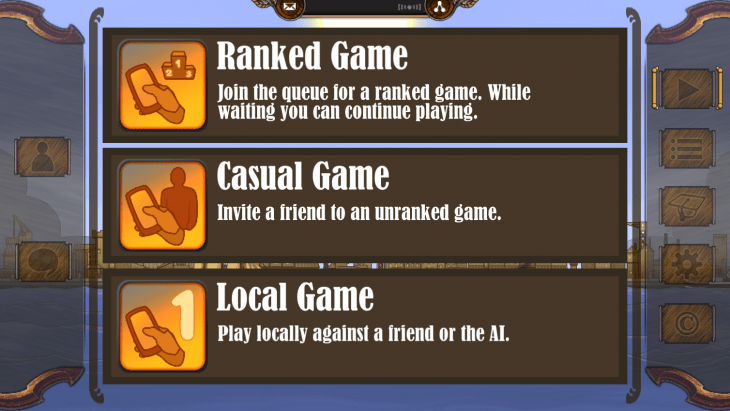 I haven’t played the original physical version of the game, so my mind was blank and virgin-clean, without any expectations or anticipations as I started playing. And at first, I felt overwhelmed. Even after the detailed Tutorial, I tapped my way through my first game against the AI randomly, sinking in the amount of information the UI loaded onto my poor overheated brain.

However, I did not despair because at the back of my mind I suspected the challenge was smart, and by the end of my third game I finally got the hang of the gameplay and that diabolical spreadsheet. Needless to say, anyone familiar with Le Havre game will find their whereabouts in no time, as much as any board games enthusiast.

When the initial fog dissolved, the game seemed quite accessible and very addicting. Once you get the basics, figuring out a strategy to beat the Very Easy AI opponent is a no-brainer. The average difficulties are accessible while the hard ones require some more elaborate savvy to play. 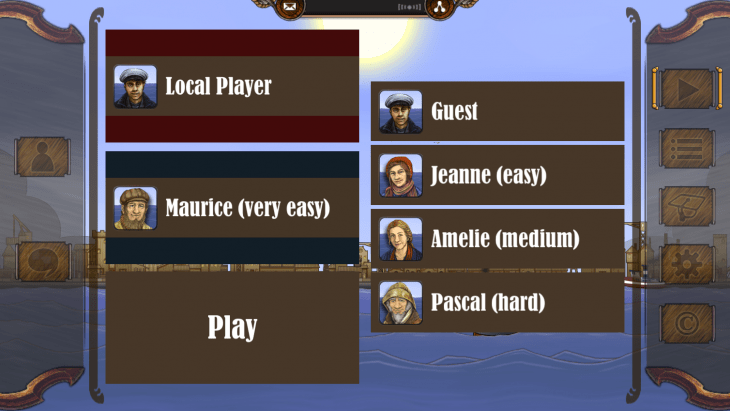 Designed for two players, Le Havre The Inland Port starts off with a Tutorial, and you should not skip it. Even though it explains the game’s rules in a straightforward manner, step by step, you need to at least know where to look for the answers if you stumble during your first couple of plays.

So, you have 12 days to score higher than your opponent. Each day is a round, and the more you advance, the more turns you will be able to make in a day. You can see the number of turns you can take in a day on the green bar at the bottom of the screen where the micro-version of your warehouse resides.

You score points by generating Francs and equity from the buildings you construct. A gameplay of 12 rounds versus the AI on the easy difficulty mode is not too long, some 20-30 minutes, depending on how much time you spend thinking. 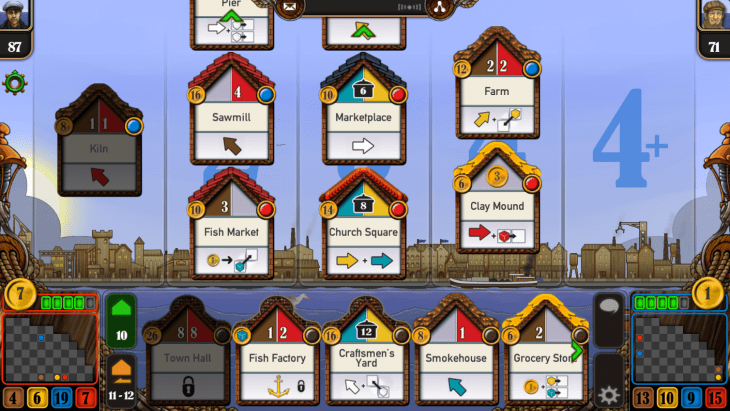 You play taking turns buying/constructing buildings, using them to generate resources, trade resources, buy more buildings, earn Francs. Each building has a number of indicators on it, and your primary goal is to learn to read them and manipulate the buildings accordingly. I suggest you simply go over the Tutorial a few times without speeding. Some numbers stand for the number of goods required to build a structure. Others show the price in Francs you need to pay to build it. The icons located in the middle of the building indicate where that building will move your resources on the spreadsheet when you use the building.

Now, each building can be bought, used and sold. Mind the little colored button on each building – Player 1 is Red, Player 2 is Blue. When you use your buildings, you use them to your advantage. When you use your rival’s buildings, you will pay in Francs for the leasing, but you will also benefit from using it. I found it better to not use the rival buildings because when a structure goes unused for some time, they may choose to sell it. The effect of selling a building is you get half its price, but you lose in the score. Overall, I found it inefficient to sell the buildings. 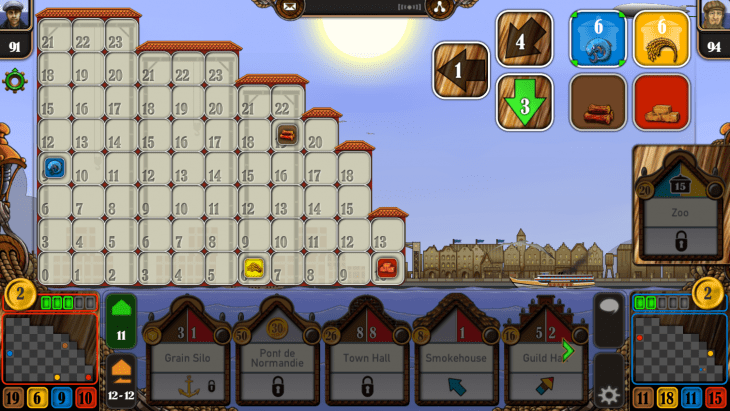 The reason I mention the Red and the Blue buttons on the buildings is they’re relatively small and easy to overlook when choosing a building from the list that gets quite overpopulated soon. In fact, that is probably the only complaint I can come up with – when the buildings populate the bars, it gets difficult to scroll through the list because the game “thinks” you choose the ones you simply wish to scroll through. Also, it is not immediately obvious which actions you can perform during your turns within a day. For example, I am not sure if you can “use” one or several building per day.

Now, the diabolical spreadsheet I referred to is your warehouse where you can see the stock of your fish, grain, lumber and clay. They’re 4 types of goods only, and once you understand how the arrows on each building work, you will know how to win the game. Some buildings, when go unused and unsold, generate a special ability you can use and promote one or even two resources significantly in a single turn. The system is very clever and it lets you balance the risk and the reward in very cunning ways; it encourages not only experiment, but also careful planning. The game also is a great memory booster, with all its micro-management.

As for the warehouse grid, moving the resources left or right will either decrease or increase their amount. Sliding a resource up or down shifts the number by three while shifting the resource diagonally shifts by four (up and right, down and left). Mind the arrows on the buildings because some change the numbers of the resources by a direction-specific arrow rather than by a set number. Also, keep in mind that if a resource has been idle for several moves, the next time you will be using it, it will move more tiles. It will take you some time to get used to the grid, but before long you will focus on where each resource is on the grid rather than how much of it you have. It comes surprisingly naturally when you get the idea. 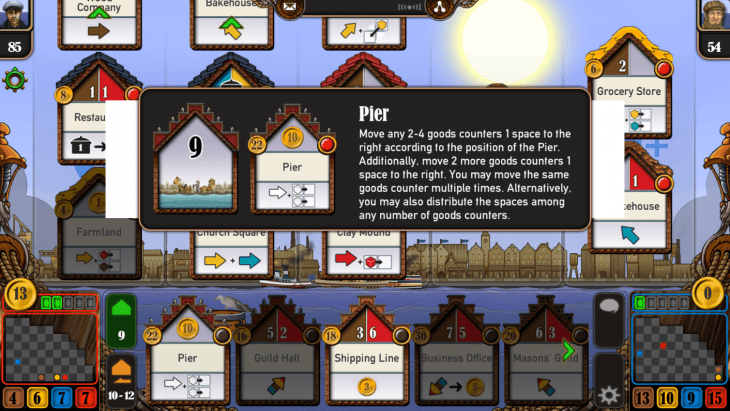 All this book-keeper’s fest opens up endless possibilities for strategy and careful planning, calculating, and coming up with the most successful plans that will bring you the most victories. You will have your favorite buildings to begin with, and your favorite special buildings, which do not generate resources, but generate Francs instead, like the Zoo, a Church, some guilds, halls, and the like.

The game ties all of these big and small details in a coherent, well-implemented UI and a very addicting board game, where a timely move earns you more resources or Francs than all the preceding ones. Do not skip on building the special structures, docks and all the buildings that have the anchor on them.

It is worth mentioning you can choose from several levels of difficulty when playing versus AI. Once you beat the AI, you can proceed to the PvP games – online and offline, asynchronous, and climb the leaderboard. 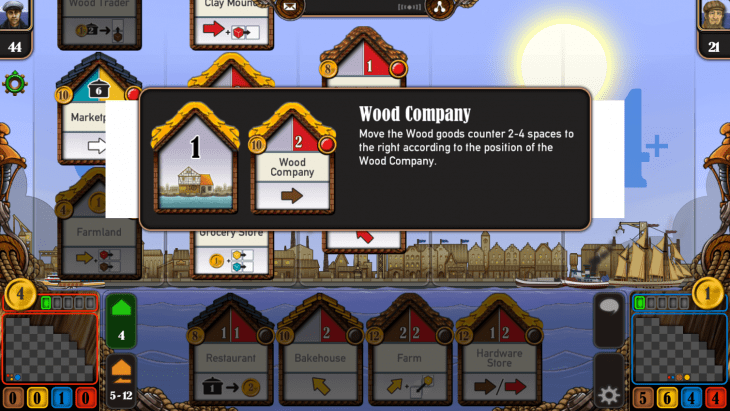 Clean, smooth, easy on the eyes and fitting the premise, the design of Le Havre Inland Port lets you focus on the gameplay and strategy. The only nag that I experience is how the game thinks I choose a building when I wish to scroll through the list and how easy it is to “use” a rival’s building by mistake because there is no “Undo” button. Other than that, the game runs buttery smooth and you can play it offline. It’s officially my favorite game for commuting now. 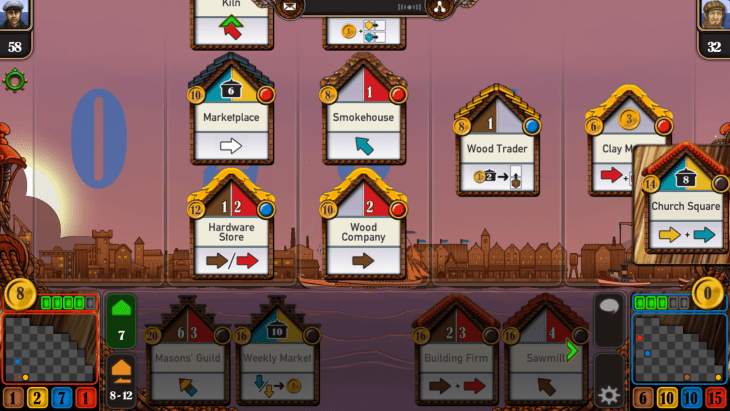 Minor flaws aside, Le Havre: The Inland Port is a clever and solid 2-player board game that lets you play offline, versus AI or several players in different instances of asynchronous play. It’s ported to the three mobile platforms, which is a rare blessing. The novice players might take some time to learn the basics, but rest assured you will appreciate the learning curve when you realize how rewarding the gameplay is. All things considered, if board games are your thing, you can’t skip Le Havre The Inland Port.