Legacy of a Thousand Suns Mobile has a story to tell, and it’s the glorious space adventure with some intrigue, a lot of action and the obvious influence of Star Wars. The game is very well written and the story sometimes goes various directions that are easy to digest in short sessions, thanks to the basic plot and the pulp fiction style. A few paragraphs of text will accompany every mission in every area and if you need, you can go back and re-read them.

This is a deeply immersive sci-fi MMORPG that will make you defeat villains, explore the star systems and make important alliances with other adventurers. The gameplay is basically static images and text, but the artwork and the interface rendition is awesome, that is if you enjoy turn-based adventures. The developer behind Legacy of a Thousand Suns is also known for the Dawn of the Dragons so if you have enjoyed that fantasy epic, this particular game is worth trying out.

This game is both engaging, stingy and dull at the same time, and only the patient sci-fi fiction aficionados will appreciate the core of Legacy of a Thousand Suns. It is the text-based warfare, where you have to explore and engage in narrative that comes with each set of action. You have to confront and defeat all sorts of intergalactic villains and escort the beautiful princess away from danger, and charge numerous enemies as the story evolves. 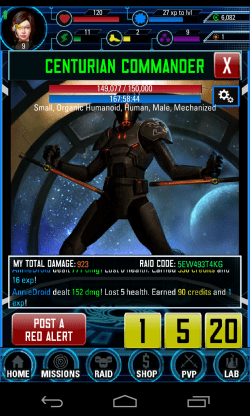 The game is based on the freemium model, which means it is initially free, and offers in-app purchases while the action is time restricted. The latter means you have to sometimes wait for some elements like stamina and energy to get restored before you continue your mission. This slows things up for you, especially if you’re knee-deep in the enemy gunfire, but that’s the point with the freemium model. You can make an in-app purchase whenever you like, but that usually turns out to be pretty expensive. However, if you’re a casual gamer, you’re probably used to enjoying the games without making real money purchases.

It is an extremely well-written narrative for those who appreciate the good sci-fi read. Text and artwork are superior and if you appreciate it, you will be fully immersed and enjoying the gameplay. The user interface boasts of a smooth design and, provided the gameplay is somewhat complicated, the UI is easy to navigate. Due to its increasing complexity, the game offers an ongoing tutorial as you continue your exploration of the system. Exploration itself is quite extensive, but it is also a way to get yourself immersed in the storyline as new elements of the game are introduced to you. 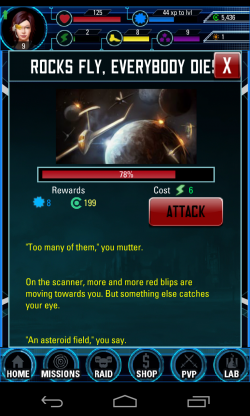 An ongoing musical score accompanies the gameplay, and the soundtrack is wonderfully crafted and adds up an extra dimension to the game. The music and the gameplay do have Star Wars atmosphere to them, and probably, for sci-fi devotees this is a good thing.

If you’re a big fan of sci-fi RPG’s and online gaming, this is definitely the game you will enjoy. Even though the gameplay is slowed down by time restrictions, this is still a very nice time killer for the sci-fi fans.

As you begin the game, it requires you create your character from a set of cosmetic options and then you have to go through 12 pages of text that explain how this game works. There is no way that you can cut this process because you simply need to know how the system works and what the game expects you to do. Considering the fact that tutorials can never be fun, this particular tutorial is written very clearly. Nevertheless, most of users will forget the information two minutes after the introduction ends.

The game feels a lot like a hybrid of the card-battler and the text adventure. You have the energy bar that shrinks as you progress and refills very slowly over time. You have a health bar specifically for boss encounters, and unlike other battles, in the boss encounters your enemy fights back. The stamina bar shows how often you can help your friends and participate in boss raids while the honor bar increases as you gain experience. XP is incremented as you win missions, so you get credits to spend on the game premium currency to buy power-ups.

The first impression is you have to keep an eye on too many details, but as you progress you realize you can actually ignore those stats. The core of the game happens to be simply selecting the mission you would like to go on, and then attacking your foes until you win.

The one major drawback is that your energy bar gets quickly exhausted and you then have to wait to move on with the game while sometimes you have trouble understanding all of the systems in the play.

As far as text-based sci-fi adventures are concerned, Legacy of a Thousand Suns is one of the best games for mobile. An exceptional adventure filled with immersive descriptions that evolve rapidly around an excellent storyline. The interface is great and easy to use and you will find yourself very well guided throughout the game. While the style of this game is not going to appeal to everyone, and sometimes you get slowed down by waiting for your powers to replenish, the game is certainly going to attract the RPG genre fans. Since the game is initially free, we certainly recommend you give it a try.