They dropped the 3 at the end of LEGO Batman, but Beyond Gotham for iOS is still the same as the console version it was ported from. Lego Batman: Beyond Gotham brings you to a variety of places in the DC Universe, and you meet a ton of characters from that realm along the way. As with any LEGO game, there’s a fair share of puzzle solving, action, and exploring for hidden items. This is a premium game, but there are still some IAPs available but not necessarily required to complete the game in it’s entirety.

Not Arkham City, but not bad

We’re in an era of very good Batman games, particularly the Arkham series on console/PC. Obviously you won’t get the same gritty version of the super-hero in a LEGO game, but that doesn’t mean it can’t be just as much fun. Beyond Gotham offers up 45 levels that you can either breeze through, or spend hours and hours trying to track down all of the hidden objects. Even without stopping to smell the roses, you’ve got several hours of Gameplay just going through the main story — and you can always go back and re-play old missions (in-fact, it’s required if you want to complete the game 100%). 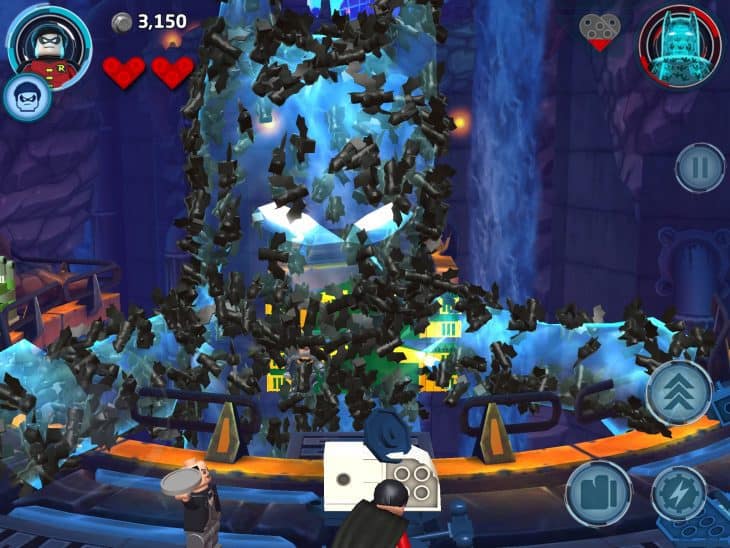 The graphics were good, and you play through a lot of different environments which helps prevent the game from going visually stale. I felt like the Interface could have ran a bit more smooth, especially with how often it needs to be accessed. It was mainly apparent with a few certain things like using Robin’s ranged weapon and having to drag your finger from the button to the target, or switching from one suit to another and needing to wait a couple seconds for the menus to load and process. Of course these are small things, but they’re also things you need to do numerous times throughout each mission.

The LEGO formula lives on

Being a detective has always been a part of batman’s repertoire, which works well with LEGO’s big emphasis on puzzles throughout the game. However, it really doesn’t feel much like detective work as it does ‘interact with object A to open object B, and interact with object B to obtain goal C’. Still, that’s the LEGO formula, and it appears they’re going to continue to stick with it. I won’t say it’s a bad formula, and overall I enjoyed playing Beyond Gotham. Typically, you’re making slightly different interactions with various objects to make it seem less repetitive than it actually is, and it works up to a point.

Exploring the map for hidden objects is a huge part of the game, and it’s how you’ll unlock the many different playable characters. When you aren’t solving little puzzles or punching bad guys, you’ll be looking around for out of place objects and smashing structures for more currency. Some of this stuff is hidden pretty well, and you’ll need to utilize a lot of the different suit abilities that your different characters have in order to even find certain objects. There’s easily over 200 different character unlock tokens, joker statues, and more to find throughout the game.

Plenty of things to do

Having a lot of content is one thing, but having a game that is enjoyable enough to where you’ll want to access that content is also crucial. Beyond Gotham definitely has the content to offer five star replay value for a mobile game, but it’s not necessarily stuff that I’d say a lot of people are going to sit down and unlock entirely. There are over 100 characters you can unlock, but they require specific unlock tokens found throughout the game, as well as a certain amount of studs (the LEGO currency you receive) which varies greatly between characters. 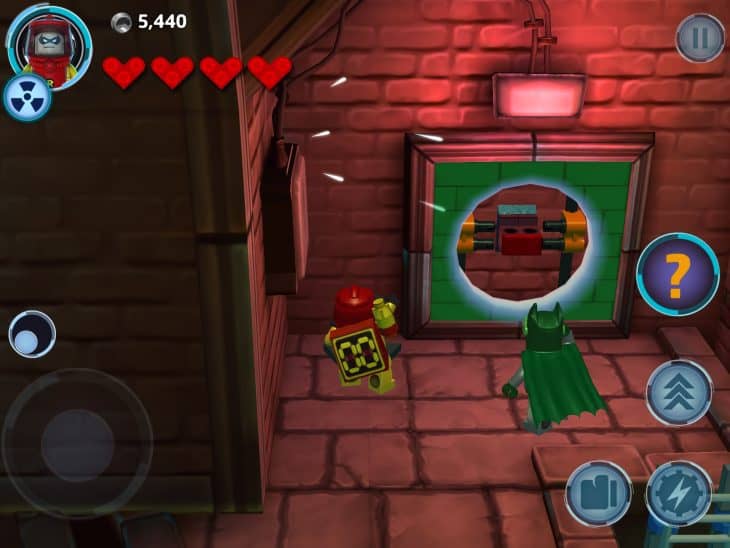 I’m sure there’s a few people out there who will have no trouble unlocking everything this game has to offer, but I’d say the majority might just stick around for the 45 campaign missions and maybe a few character unlocks after the fact. That’s definitely not a bad thing either — there are plenty of mobile games out there where I’m sure most people wouldn’t even bother finishing the campaign. Honestly, I may have been a bit too harsh in this review on certain things as I really did enjoy the game, but I’ll stand by my verdict as the final score is still good.

Although Lego Batman: Beyond Gotham is a $5 premium game, there are still IAPs to squeeze out a bit more cash. You can spend money on gold bricks which are used to unlock characters and also get free red bricks. Every character is still unlock-able from playing the game without spending money, so these IAPs aren’t so bad. However, I still dislike seeing anything that tempts you to spend money after the fact with any premium game.

As for whether or not this game is worth the door price, I’d have to say yes based on the quality of the game and the amount of content it has to offer. Now, for those seeking a strictly beat ’em up style batman game, you may want to look elsewhere. Anyone who has experience with any LEGO game in the franchise should already know what to expect.

There’s a ton of content to enjoy in Beyond Gotham, and it’s definitely fun to play for a while. Still, if you’ve ever played a LEGO game before, you’re going to be saying “I’ve done this before” quite a few times throughout your play-through. At the end of the day, the LEGO formula still works, so Beyond Gotham still passes as a solid game — and the plethora of content makes it worth the money.

Let us know what you thought of this review and the game itself by leaving a comment below! And be sure to bookmark Pocketmeta, and follow us on Facebook and Twitter for more mobile tech and gaming news.