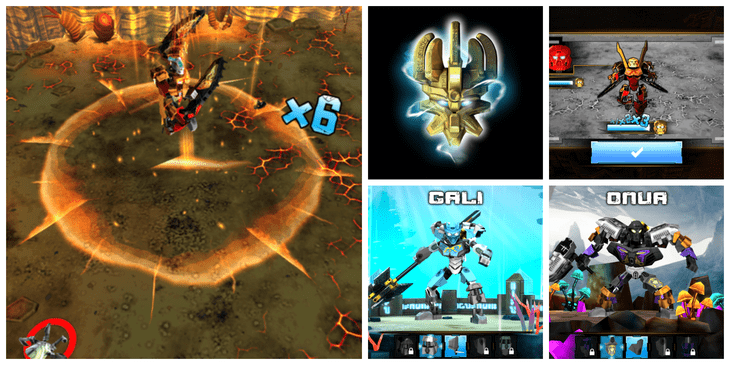 I have spent a great deal of time playing Lego BIONICLE these past few days, and the mixed feelings I had about it have finally come to a conclusion – it is a fun time killer for children and kids, or anyone looking for a fun, free game without much depth. If you come with no expectations, you will most probably find it entertaining for those moments when you can spend some time tapping the screen and enjoying the bright visuals. If you are an adult gamer with high demands – take a mental note it is a free game, without ads and in-app purchases we are talking about. 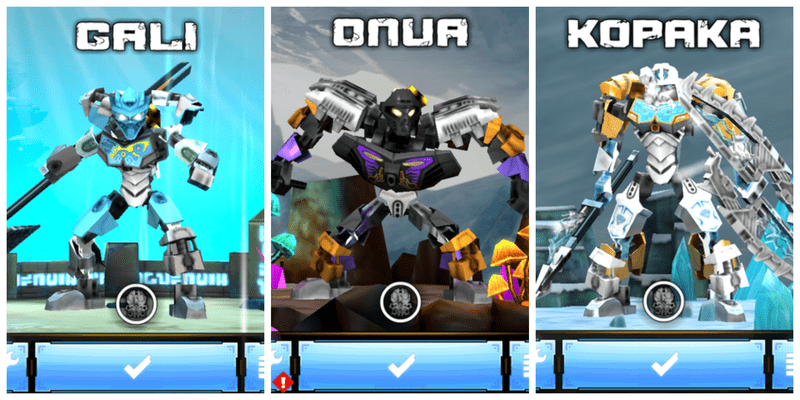 Lego launched the BIONICLE line of toys in early 2000’s, so no wonder I haven’t heard of them, for at that time of my life, I no longer played toys. Consequently, I have no idea who BIONICLES are, or why they are fighting spiders, or where they are, and what the Golden Mask stands for, and what it does.

Suppose, you know the story, the premise and the characters – maybe that will get you more hooked than a non-initiated player like me in this case. However, I have young nephews, and they love Lego, but mostly the Star Wars line of building bricks. When they saw the robots, they immediately said they were Transformers, and that was it – I couldn’t think of a reason to convince them otherwise. They did feel disappointed the robots did not transform into vehicles, though. 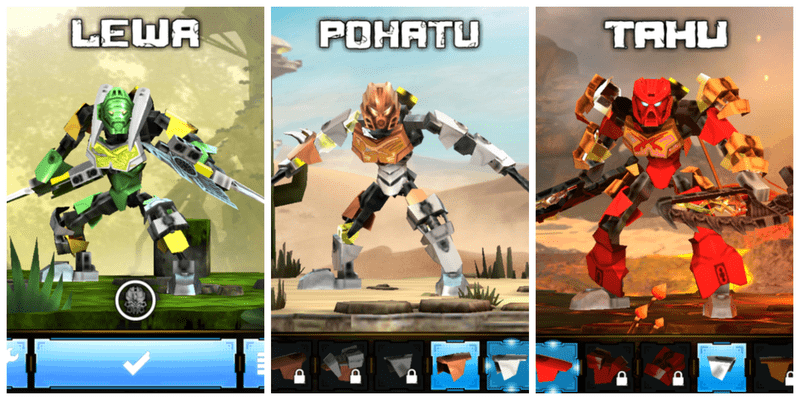 There are six robots that are also masters of elements – Tahu the Fire, Kopaka the Ice, Onua the Earth, Gali the Water, Pohatu the Stone and Lewa the Jungle. Each robot looks spectacular, and as you play, you will be unlocking various body parts to add to it – there are over 100 of them.

The gameplay is pretty much the same throughout the entire game – you tap and drag the robot to make it move, and tap on the foes to have your robot fight them. The enemies are skull spiders that look like mechanic spiders and don’t fight much. What they seem to be doing is discharging electric shots at your robot, which immobilize it for a while. Whenever you see a spider getting ready to charge, better move away from its reach.

Each robot has five stages, and a boss fight, as well as an endless mode for honing skills. You are able to play all six characters without having to unlock anything – it is the best present from Lego ever, since all the content is unlocked, free of charge. You will need to beat each stage in order to get to the next one, but that’s the only challenge here. 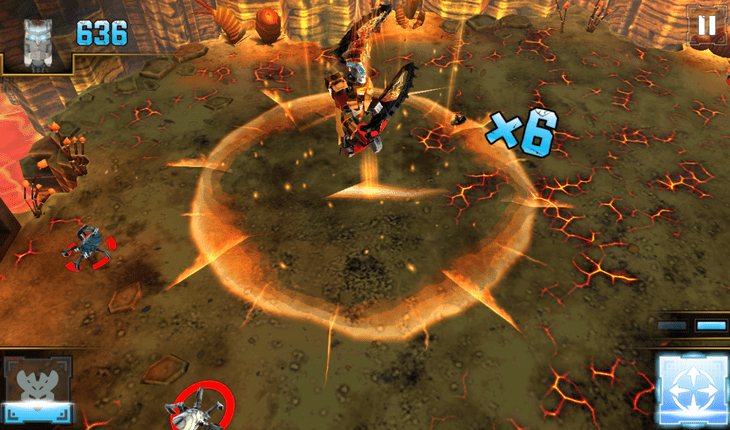 Okoto, the island where Bionicles dwell, is divided into six regions – spectacular and vibrant. Once you clear all six regions, you unlock the endless mode. Each stage in each of the six regions unlocks a special ability or power-up: the first stage gives you the power of an elemental attack; the second unlocks a protector, or a boost as I call it, which eliminates all spiders that are within your radius of reach; the third stage unlocks a special boosted elemental attack that works in auto mode eliminating skull spiders; the fourth unlocks the Golden Mask, which boosts your health and attack power. The fifth stage is a boss fight, where you have to confront a giant skull spider.

Again, each robot has the same five stages, and yes, the gameplay gets a bit repetitive after a while, but the difficulty increases, and you get to unlock various parts and pieces of your “toa,” as well as enjoy the difference in environments. 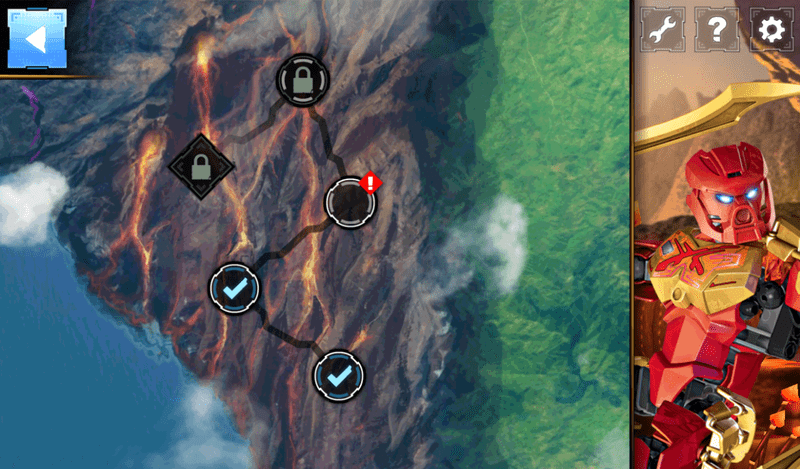 The graphics are neat and spot on, although at times they look a bit out of focus, especially when the moves are fast. Nonetheless, the design, UI and visual effects are great and provide for the half of the game’s fun factor.

The music is neat, and the accompanying mecha sound score is also complementing, although after a while I turned the sound off altogether – it would be nice to be able to have your tracks of choice play in the background. 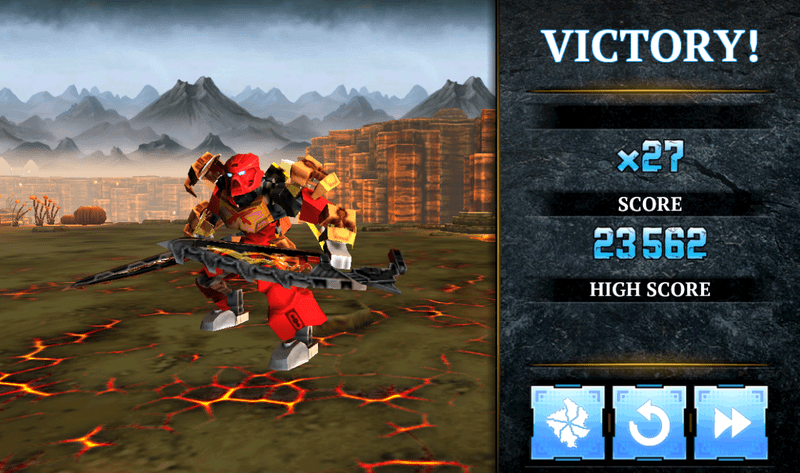 Lego BIONICLES is a fun little game for players of all ages looking for their next time-killer. It is moderately addicting, somewhat repetitive, good-looking and absolutely free, no in-app purchases or ads. My guess is Lego are looking to get new generations of kids hooked on the characters to make parents buy the BIONICLE toys. For the fans of the toys, however, this would be the first BIONICLE mobile game ever, and for that matter, the first video game based off of BIONICLE that has melee attacks because the other games, as far as I know, had the robots shoot despite the fact that they sported swords and axes.

Overall, it is a decent and entertaining time-killer, perfect for children on a road trip. It sports no graphic violence or blood and disjointed corpses; does not require reading skills, unless you care for a little background story; won’t let your kids spend your monthly family budget on IAPs, but may potentially have you buy a BIONICLE toy.