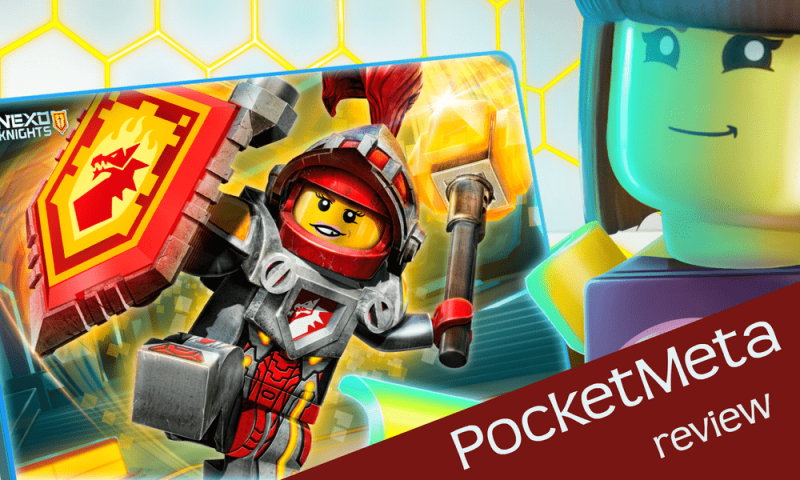 Lego is launching a new line of toys – Nexo Knights, and a new mobile game to go along with them. We are playing the game, and can assure you it’s one of the games to enjoy this month for the casual players, kids and those who love all things LEGO. Besides the toy sets and the mobile game, Lego is also launching a series of animated shorts – it matters in the context of the mobile gameplay, you will see why.

First if all, the game is fun, which makes it worth a look. It’s a combat hack-n-slash, with basic RPG elements and wonderful graphics. Knighton is a magical island inhabited by Nexo Knights. As of late, it’s been invaded by Jestro (that looks like Joker) and some evil critters, lava monsters. Your aim is to battle them level by level, assembling a team of powerful Nexo Knights. You also have a wizard, or a ghost of a wizard in a funky Fortrex, a rolling castle of sorts, where your knights upgrade their powers. 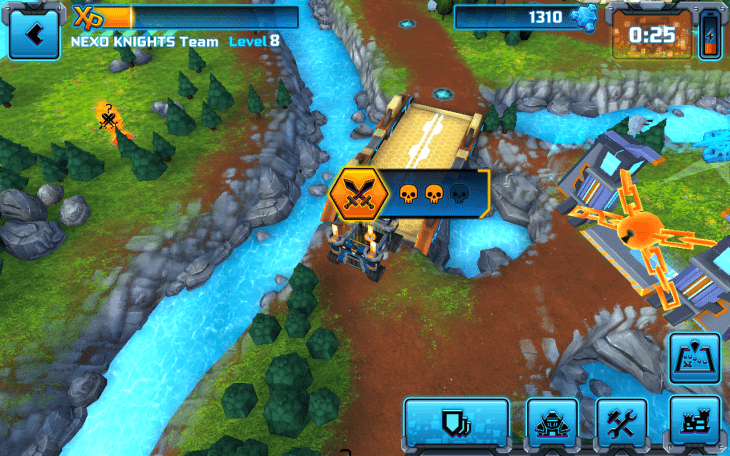 The combat has you tapping on the enemies to activate the basic attack of a knight. You can also long-tap on an enemy to activate a knight’s special strike, which is more powerful than the regular one. Tap anywhere to run there, tap on the active Nexo shield to activate its time-limited power. Besides fighting, you also need to run from the bombs and poisonous spit the enemy throws at you. This is where the controls fall short a bit – the game confuses between running and tapping to attack way too often. 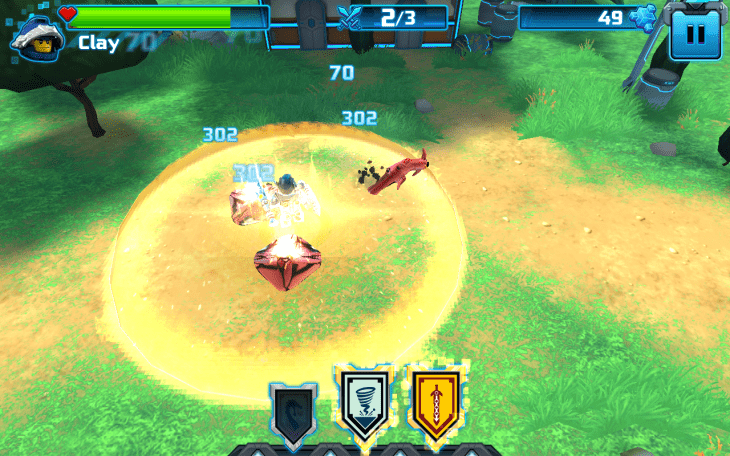 Since we mention the performance, there are glitches, unfortunately. Once the game stopped registering my controls, so the knight remained glued and inactive while the single enemy left kept throwing its bombs and finished me off. The loading times between everything is very long and aggravating – jumping from screen to screen, or launching a scan is tedious. The game does seem to drain the battery. Considering Nexo Knights is brand new, there is hope the developer fixes the bugs in the update. 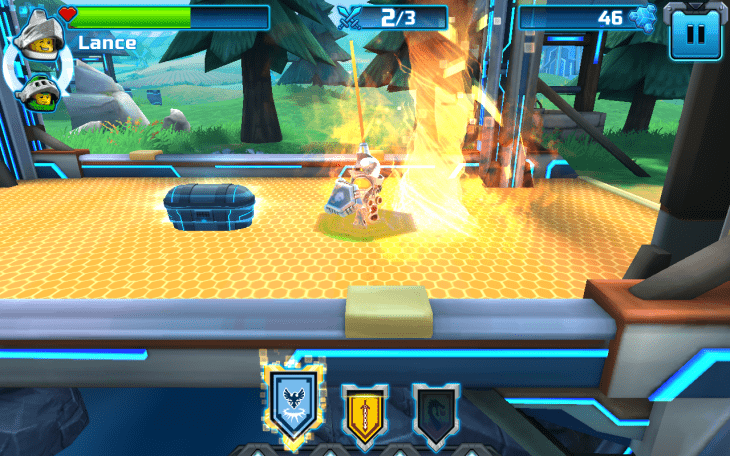 The powers come in the form of the shields, a total of 100+, that act as boosters that have cool-down timers, and can be upgraded, too. The game grants you one or two as you start off, but after that, you need to look for the Nexo powers either in your toy box (after you have purchase the Nexo Knight toy sets), or online.

Here is where you can find Nexo power shields:

Once you get a shield, you can tap “Try It” in the left bottom to see how it works in action before you take it to a real battle. Before each battle, you will choose two knights and three Nexo shields from the ones you have. You can use only one knight at a time during the battles; you can switch from one knight to another only in between the waves. Each level consists of three waves. 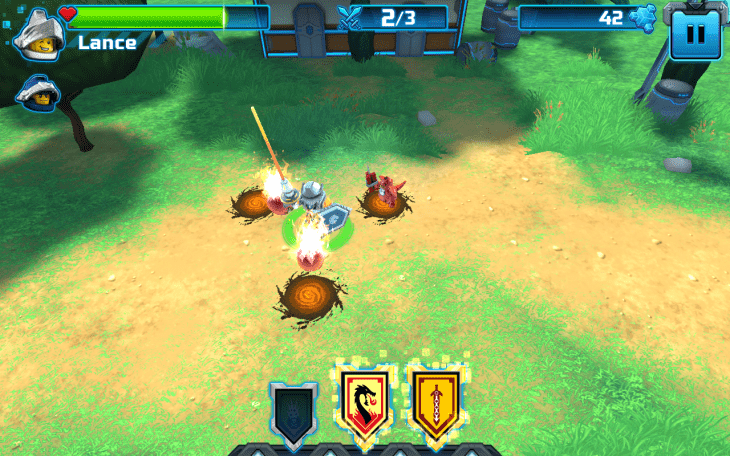 What the game does not explain too well, though, is that the Nexo shields you can scan should have the specific edges that look like the edges of a key. This matters because there are tons of Nexo shields images that just won’t get scanned, and it’s annoying. The problem is in the edges – you have to have the correct edge layout that works as a QR code of sorts that lets the app scan them correctly.

You need to scan each shield as many times as possible because that is how you are upgrading its power. You will see the power of each Nexo shield on a star plastered on it. The downside of this upgrade system is the cooldown timer of the scanner. Scan one shield, and you are locked out for at least two minutes, scan twice and you are locked out from the scanner for ten minutes. Obviously, this puts a cap on your upgrade pace and lets you have a couple of defeated battles before you can beef up your Nexo powers. Here, grab a few:

Each Nexo Knight has a set of parameters you need to upgrade – helmet, legs, torso, weapon. To upgrade those, you need the lego money you collect by battling the baddies. Overall, I found it possible to upgrade one hero a point per each parameter after each two or three levels. Also, the game grants you a bonus once in a while for watching an in-game lego movie. 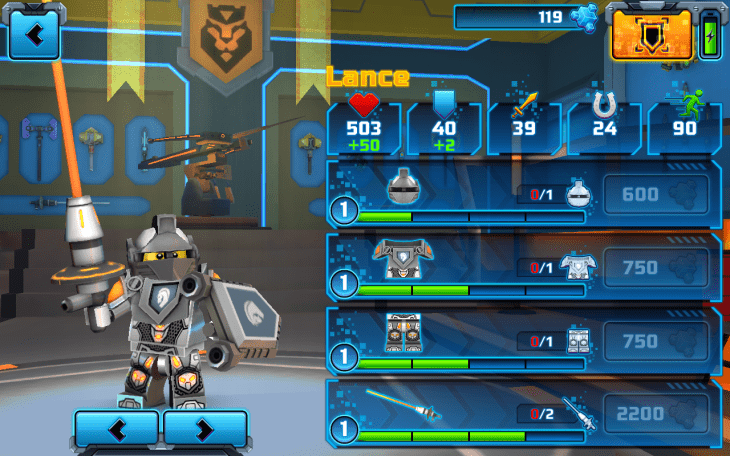 Next come the vehicles – you will collect their parts as you play, and then assemble them. I have reached team level 8, but haven unlocked only one vehicle part, so my guess the vehicles are a long-term achievement. Nonetheless, they look awesome, and I can’t wait to try them in action. 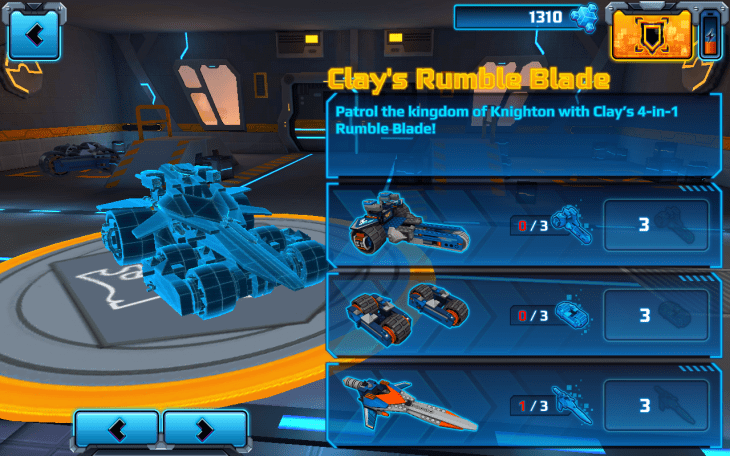 I have to give credit to Lego for the fine sense of humor that persists through their games and movies. And Nexo Knights is no exception. Lance, a mighty knight wielding iron ammo and long spade, enjoys spa procedures and takes a selfie with a new haircut when his companion seeks him out for a battle. The short dialogues are fun and probably aimed at an audience older than your kids. By the way, if you download it for the kids who can’t read, yet, no worries because all the dialogues and instructions have a top-notch voice over.

You start off with just one knight, finding the other 4 after completing levels. The combat is not overly intense, yet colorful. The map is fairly large, and you can replay all the levels to grind for more lego money and upgrade your knights. 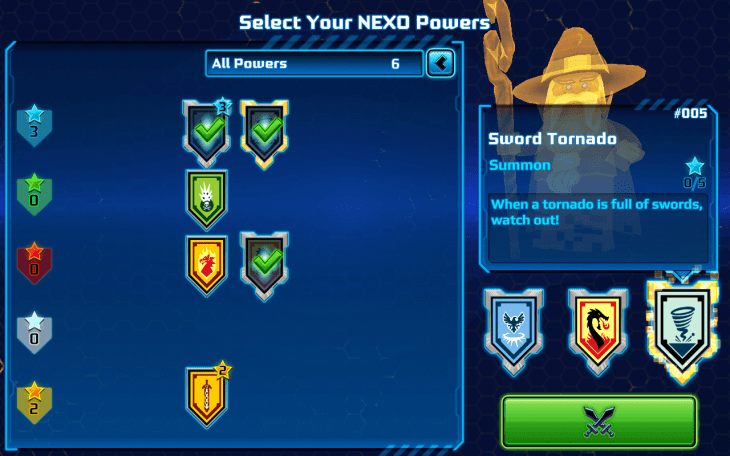 One of the fine parts about this game is it’s free, as in no IAPs free. The only limiting factors are cool-down timers and the problem of seeking out the Nexo Shields.

Visually, the game is a blast, and you can configure the visuals quality in the game’s settings. There is an abundance of cut scenes that look just like the Lego movies and the combat is fairly good-looking. 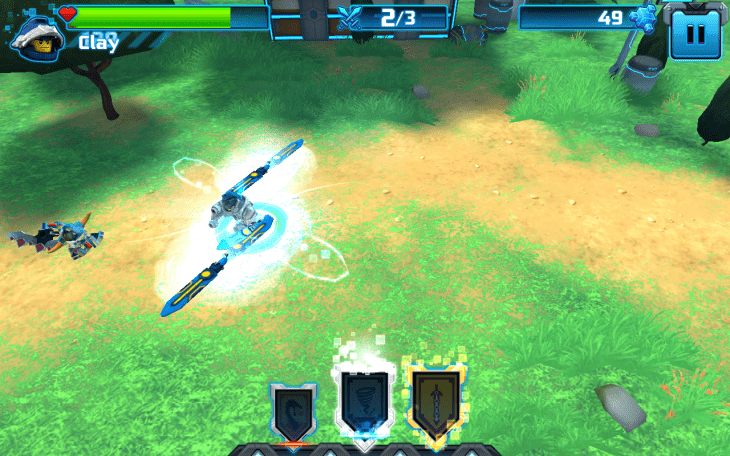 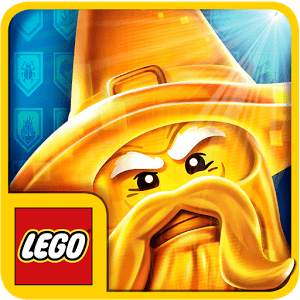 Lego Nexo Knights Merlok 2.0 is a good-looking and fun hack-n-slash time killer for players of all ages, especially the fans of Lego. The action is colorful, easy to learn and master; the RPG elements are basic, yet affect the powers of your knights. The itch to collect all the Nexo shields adds a ton to the replay value, and considering you can find them online, you might get hooked on the game more than you expected. There are a couple of performance hiccups and a control flaw that confuses the run and attack taps, but these are minor, and we hope the developer irons out those rough edges. No doubt, Nexo Knight Merlok 2.0 is one of the best new games in the free/no IAPs spectrum of the market. A must-have for the family play.