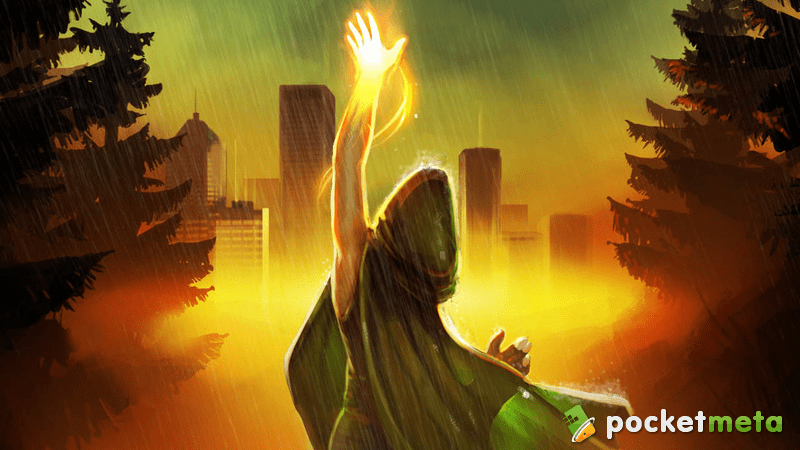 We reviewed the first Lifeline not too long ago when it launched on Android. Even though the writing and the plot were quite impressive, the implementation left a lot to desire. At the same time, there were quite a lot of people who enjoyed the awkward and highly restricting pacing and the inconvenient restrictions the game imposed on the players. The beauty is in the eyes of beholder, as usual.

Lifeline 2 does a few things differently, keeping some aspects untouched. For me, personally, the changes 3 Minute Games introduced became a deal breaker, and the difference between love and frustration. What will it be to you? 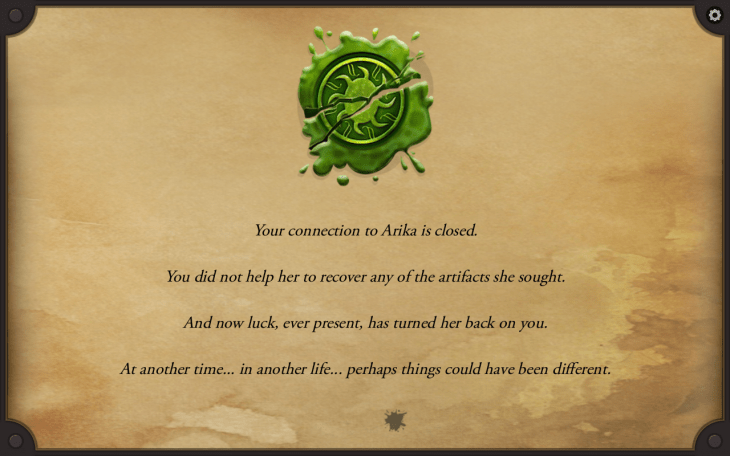 First of all, Dave Justus remains the writing force, and you must be familiar with his earlier creations like Fables: The Wolf Among Us and Lifeline. Expect the same level of wit and sarcasm, as well as some fairly engrossing depictions and plenty of pop culture references. Quite a lot of them made me grin in some of the most evil ways, especially when mocking Adam Sandler’s movies.

Second of all, forget the first Lifeline. Lifeline 2 is a completely new, independent story, with its own magic and touch. This time around, there are no aliens or sci-fi space travel. Instead, Lifeline 2 takes you to the modern-day America, where mages live side by side with the rest of us, humble humans. Only that we don’t realize the mages are mages. They do some huffing and puffing and conceal their little magic towns and shops in between the shiny billboards and fancy residential areas. Pretty much like in Harry Potter, where you have to be a mage to find that train platform to Hogwarts Express.

Third of all, there are no more gender-ambiguous names. Your vis-à-vis is a witch named Arika, 20-something y.o., homeless, penniless, on a quest to avenge the deaths of her parents slaughtered by some sinister voodoo-magic when she was 11. She tried to save her little brother with the magic she knew by then, but send him to some other dimension with a very bad climate instead. Since then, her goal is to find and rescue her brother and kill whoever or whatever doomed her entire family and town.

This is how she finds you – by establishing an inter-dimensional connection in hopes of finding her brother. Instead, she finds you, and you “choose” to stay with her till the end, providing your invaluable opinion, advice and what little help you can. 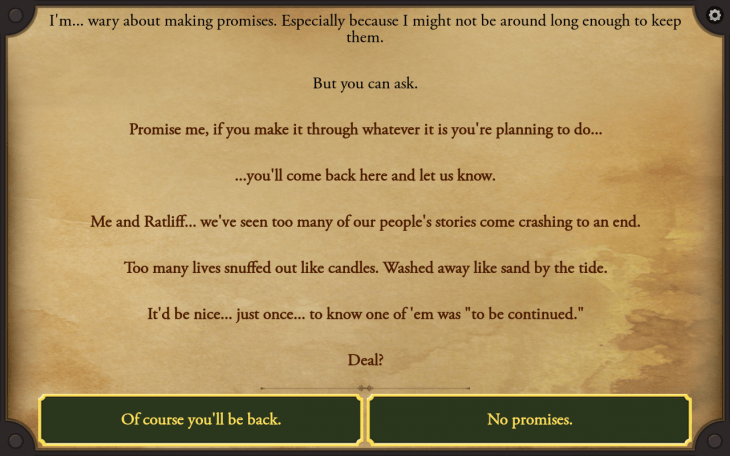 You give Arika your name, so whenever she talks about you, or whenever some other sinister being interferes with your channeling, they call you by name. Very creepy. Anticipating that, I made up a name, being the sensitive person. At some point, inventing a different name felt like the right thing to do – when Arika spoke of sacrificing the ones she loved to magic. And she admitted to caring about her brother, and… me. That is, you the player. Yes, this game does strike an emotional chord and establishes the connection just like it did for many players of Lifeline with Taylor, that gender-less astronaut.

So, what’s the deal with sacrificing the ones you love to magic? Ta-dam! Arika is not some angel in white feathers. She uses her blood to do the dark magic rituals, cast spells and summon the forces of the nature. It’s what her entire family had been doing before they died. Her body is all scarred, and the more she disrupts the fabric of reality, altering it to fit her purpose, the less soul she has left. The less people she loves remain unharmed. So, when she implied me, the reader, might suffer the dire consequences of making friends with a dark witch, I felt cold chills running down my spine. Awesome! Also, Arika may be quite difficult to like at times. The fact that the story evokes such a wide palette of emotions speaks for itself.
With that, and a revenge in mind, Arika and you set on a series of quests to find and take some very serious and powerful magical artifacts, go back to her home town and … come what may. She’s a desperate girl with nothing to live for except for the brother; and she does not even know if he’s alive.

Story-wise, even though I am more of a sci-fi fan, and magic, witches and horror is not quite my thing, Lifeline 2 got me hooked a lot more than its predecessor. Who knows why… maybe because of that totally creepy Silent Hill meets The Ring meets Crimson Peak episode at the orphanage. Or, the changes introduced to the gameplay, as compared to Lifeline, made a huge difference. 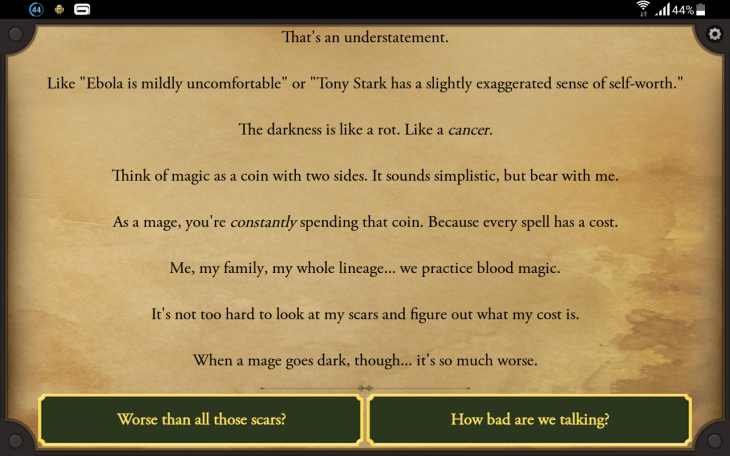 Lifeline 2 does exactly what I craved for and missed so badly in its older sibling – it lets you play at your  own pace. I hated waiting for Taylor to nap, drag stuff, kick doors and do all those things I could not partake. Arika, on the other hand, lets you choose the pacing.
When you reach one of the ends where you “did not help Arika” for the first time, and choose to rewind the story to an earlier point, you can also choose the speed of the game. There is this fast-forward option that, when enabled, skips all the waiting and typing delays at all times. This turns Lifeline 2 into an actual gamebook – the one I can read at my own pace, when I have the time and dedication, not when an imaginary character has time between a nap and a pee. I enabled that option, and advanced in the story as much as I wanted until it felt right to make a pause. Right for me. By the way, it seems odd this option is inaccessible from the regular Settings within the game. What if I change my mind and choose to revert to the slo-mo? 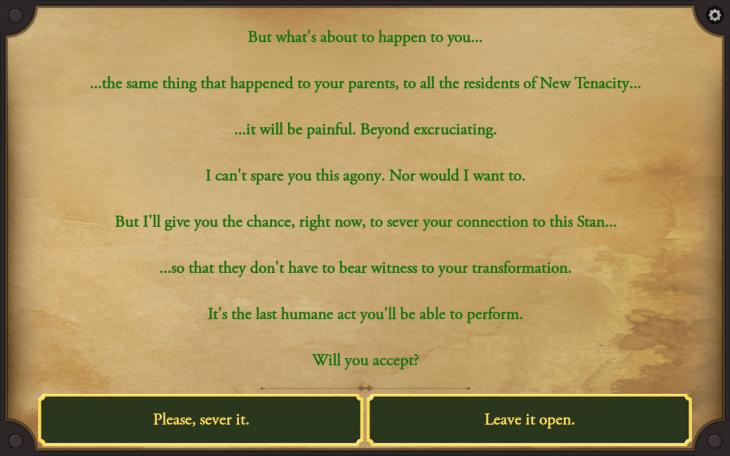 Likewise, you don’t need to kill Arika, or make her so angry she cuts the connection to rewind a story. Pretty much every choice you make translates into a button with a rewind option. Lose a game of dice? Don’t despair. Get back to your Odds and Evens choice and change something – you will find that win combination eventually. You get the idea.
Everything else seems familiar. The design does not really take a paragraph to review because it’s a book. The traditional magic and fantasy font on the old-looking paper, and the typing icon look like that Horcrux blank diary of T. M. Riddle in Harry Potter and The Chamber of Secrets. Guess I am a bit into fantasy and magic, huh?

What does provoke the chills is the music and the sound score. Non-essential at first, it becomes maddening when the story reaches the critical scenes. So, when it’s scary, the music can drive your pets nuts. Trust me, spare those hamsters. 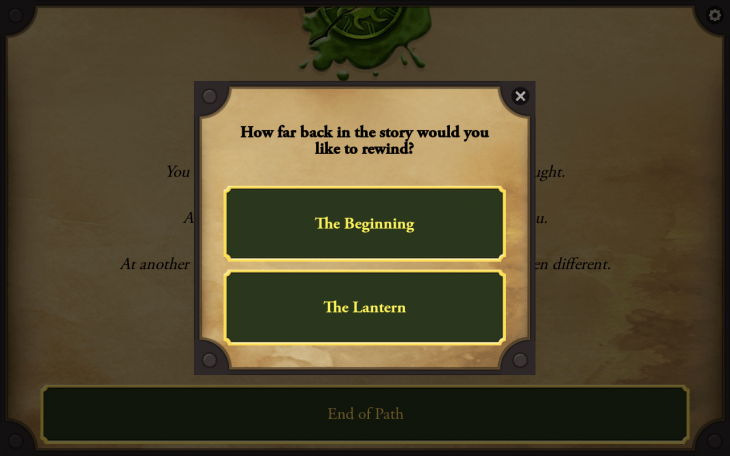 A few reading loops when you change your choices

Lifeline 2 shows the evolution of 3 Minute Games as a developer that listens to the feedback. Even though those who expected to meet Taylor and applauded the first book were disappointed Lifeline 2 is a standalone work, the rest of us are happy to have a new story, a new protagonist to save, a blood-chilling entourage, gorgeous writing and the soundtrack that will scare away the squirrels outside your window. With a few improvements in the gameplay pacing and rewind options, Lifeline 2 delivers in all aspects I care for in the gamebooks – it’s branched, intense, well-paced, with a decent dose of the jokes I get, an emotional hook and a good replay value. It’s easy to recommend to the gamebook enthusiasts.